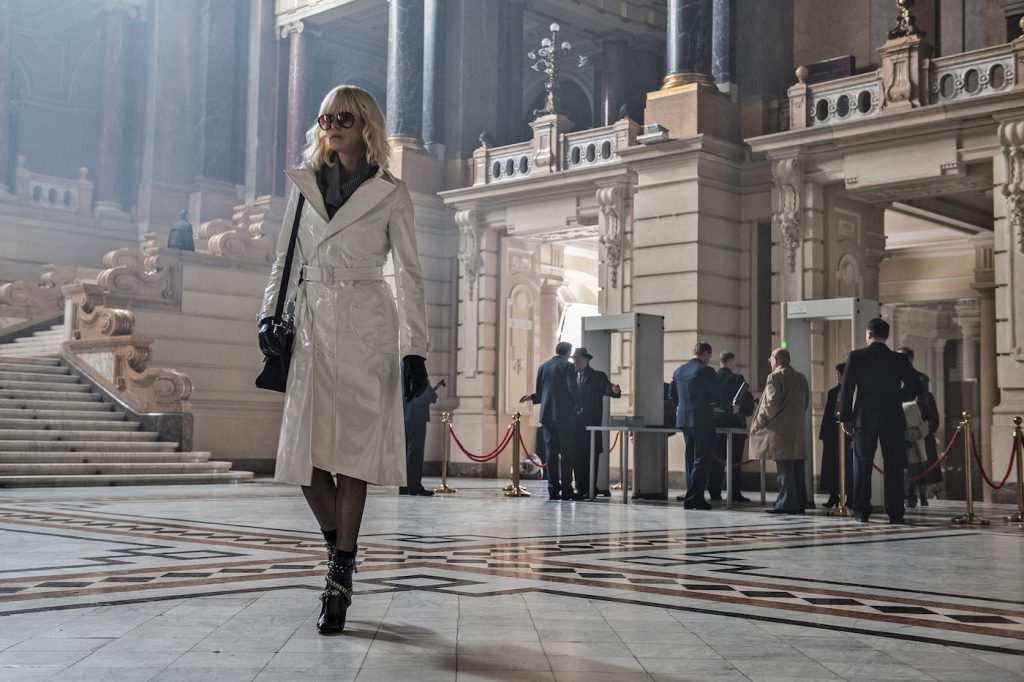 Summer 2017 got its second kickass female lead in David Leitch’s Atomic Blonde. Based on the Cold War-era thriller graphic novel The Coldest City, the film stars Charlize Theron as MI6 spy Lorraine Broughton headed to Berlin in November 1989, on the eve of the fall of the Wall. A fellow undercover MI6 operative has been killed, a death Broughton needs to untangle before all hell can break loose in the imminently reunifying country. We spoke with production designer and bona fide Berliner David Scheunemann (who previously worked in his home city as an art director on The Hunger Games) about both recreating and inventing a very special late 80s Berlin aesthetic.

What was designing for 1980s Berlin like — where and how did you research? Besides The Coldest City, but informed your aesthetic?

I started the research almost away from Berlin. I know it myself because it’s my base, I’ve been there since the mid-90s. I still got a lot of what was there six or seven years before I came. As a Berliner, I had insight into that period from other movies, and a lot of interest in it, as well. So I was already pretty briefed on this period, from the mid-70s to the late 80s, and didn’t need to dig into anything super specially. It was more finding the right balance to design a place that’s late 80’s that can be seen in Berlin, but also New York, L.A., or Moscow.

Every person has a different perception of their time. In this it was about getting some of those iconic elements into the movie that you wouldn’t expect in Berlin. I tried for authenticity, iconic places, like the Wall. But we also shot a lot in Berlin at locations like Alexanderplatz, the Kino International, or the Kaiser Wilhelm Memorial Church. There were certain places that were important to go to. We did a week long location shoot in Berlin, and the rest was really like finding the right balance between Berlin grime and also a little of that international glam that the 80s had in other places in the world. We kind of discussed it more in a way that we could draw our own picture of Berlin in the 80s. In this sense it’s almost more about finding the perfect fantasy background for our story, a highly stylized comic book interpretation. And that’s why you travel, basically, within the film, you travel through a lot of different environments, that almost feel out of the world. 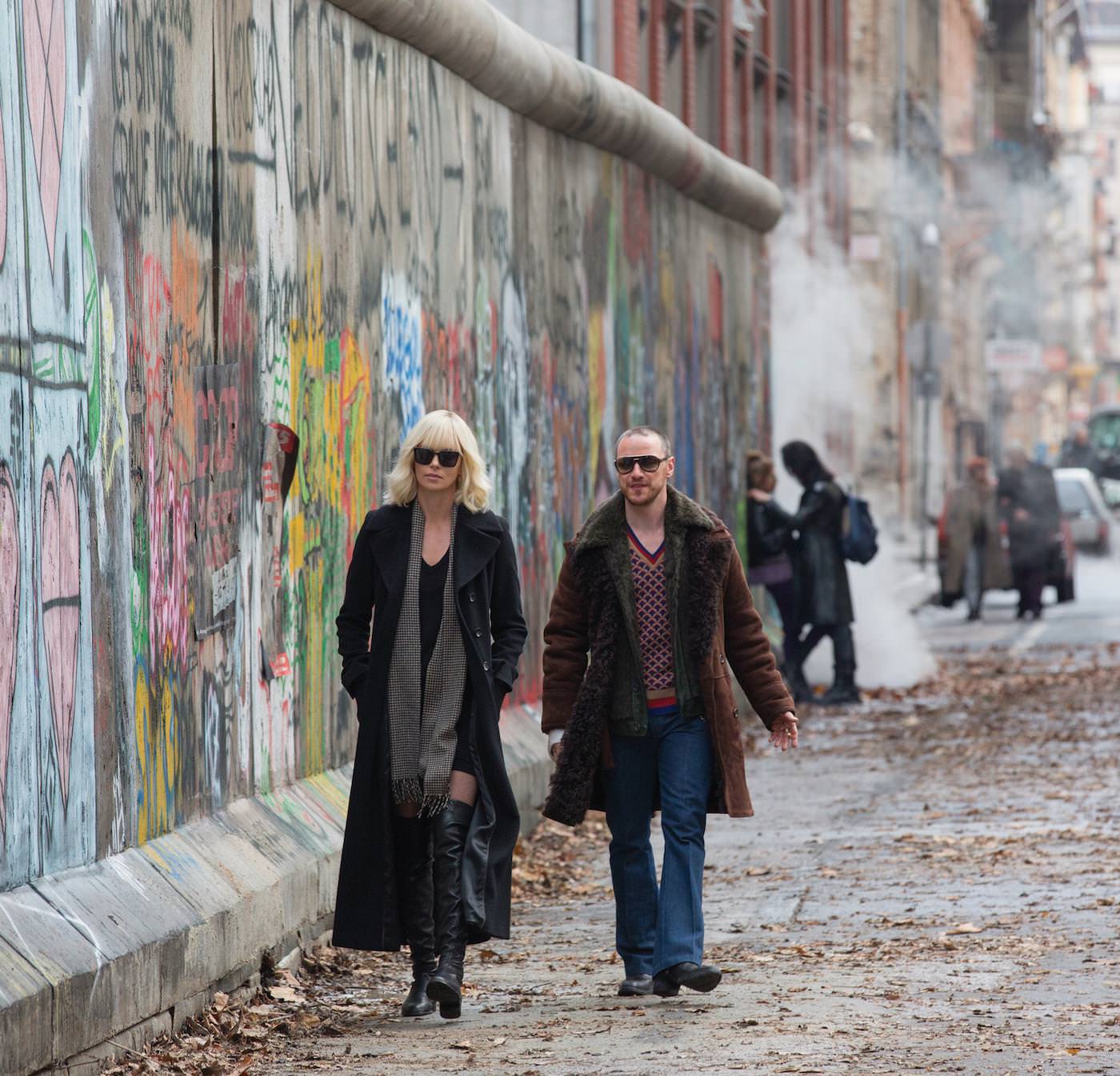 Were there any particular movies, either about Berlin or the Cold War, that influenced your design process?

Nothing is never unrelated to anything because of course you enrich your vision with everything you’ve seen in your life. That’s unavoidable as a designer. Everything you see becomes part of your creative process, even the block of concrete I’m staring at right now will become part of my vision in two years. In terms of movies, there wouldn’t be a movie that it’s based on. I think people who know the novel would expect something like Tinker Tailor Soldier Spy, more classic Cold War muted colors, only Berlin grit, nothing else, and I think that’s almost something that, if you would reference, you would probably reference it in a way that’s exactly something you didn’t want to do. Not because we didn’t like [that] movie, but because it’s a reference we didn’t want to end up with. Everything is inspiring. Also, my background is [as] an architect. I found my way into production design after I studied architecture. From that background I also look at things probably a little differently and try to interpret things differently.

What is it like designing for a film that will be laying waste to sets and props, thanks to all the action? You also have quite some experience with this as an art director on The Hunger Games and in an upcoming Deadpool franchise.

In the process of my filmmaking, I’ve worked on a lot of things that have destroyed a lot. I’m totally fine and easy with the process, but it doesn’t influence the creative process. What you do though, is that you have to think of space a little differently, in terms of active choreography. You have to build approximate distance. I could go very deep but I’m trying to explain it in a short way. You have the group of the director, cinematographer, and production designer, and there’s a constant creative process, constant creative feedback. What you need to do in action, since it’s shot so differently, there’s so much traveling of the camera, action shots, you have to design the spaces in a spatial layout. You can actually read that if you look very closely in the apartment where Broughton was killing the German police, how we reveal the apartment, with wide open access so we can pull people through there. You can kind of read an influence of action in the design in terms of spatial layouts.

As you mentioned, iconic Berlin locations play a role in the film, but much of it was also shot in Budapest. How did you decide to divide up the scenes?

That happened very pragmatically. I had a list of things I wanted to get into the movie, and the locations we ended up shooting. Those were the places that I really wanted to carry into the movie — and also the Tempelhof exterior. But for all the rest of the locations, Budapest is a great playground. It still has a little bit of the grit in the texture of the streets that Berlin had in the 80s and early 90s. It’s almost like a great shoot-able backdrop version of Berlin. The streets are narrower than in Berlin, and there are fewer trees, which makes it a lot better to shoot, from the standpoint of photography. Berlin is very difficult to shoot. Budapest is a good replacement for that. It has great industrial places to offer.

So we selected what we needed to in terms of location work, and then the hotel, and the London briefing room that was key to the story, we built on a stage. The whole London sequence is the one that holds the whole story, it’s like traditional noir. Then we went for a more authentic look for Berlin streets in the east and west, then very stylized interiors. Also, the London apartment that Lorraine’s working out of — that was custom designed. All the big characters got their own environments.

Out of all the locations, is there a specific set or sequence that you feel is most emblematic of the work you did here?

I think it’s really like one piece of work, the entire movie. So I would almost [say there isn’t anything] standing out. It all really plays with each other. Of course there are more stylized places, more fun sets, but the bathroom in the club, the debriefing room, the hotel rooms in London and Berlin, those are my favorite places, design-wise, but I wouldn’t want to [highlight] them too much because the design integrity comes through the entirety of the film.