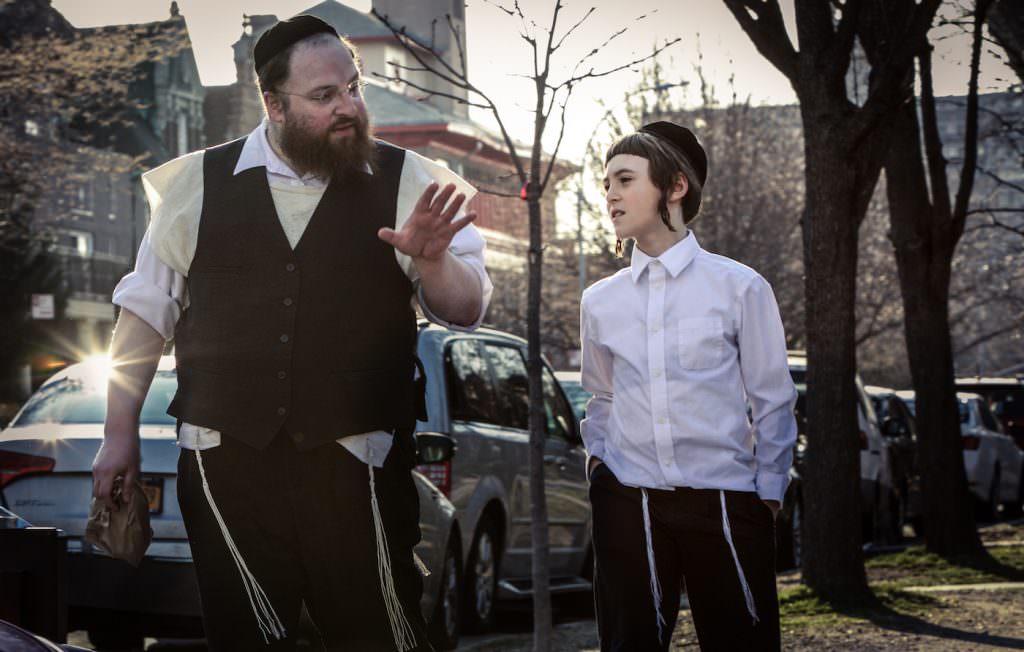 Making his scripted feature debut, director Joshua Z Weinstein drew not only on his background as a veteran documentary filmmaker but also on silent films. His Menashe is spoken nearly entirely in Yiddish, even though Weinstein speaks very little of the language, and it stars the largely unknown Hassidic comic and actor Menashe Lusting, whom Weinstein describes as “Chaplinesque.”

Yiddish was necessary because Menashe, a contemporary father-son story. is set in the Yiddish-speaking, ultra Orthodox Hassidic Jewish community of Borough Park in Brooklyn. Weinstein used many non-professionals in the film, and most are not credited because the closed community was opposed to the entire process and many refused to cooperate. “It was difficult. No ones seen a film crew there,” says Weinstein of his setting. “Some liked it; some did not.” Weinstein was born in New York, raised in a liberal Jewish community in New Jersey, and studied filmmaking in Boston. But even with Lusting by his side and despite growing a beard and wearing a skullcap, the residents of Borough Park viewed Weinstein with suspicion.

But his documentary background served him well.  “It was almost impossible to make this happen. We’d lose actors; the supermarket [featured in the movie] is really three or four [locations]. Nothing happened the way it was supposed to. But coming from the doc world, I wasn’t afraid of surprises. There were so many chance moments that could have fallen apart. We were so lucky that when the chances happened, the camera was pointed in the right direction,” he says.

Weinstein began with the simple idea to capture modern-day Hassidic life using non-actors to tell a story. He didn’t even have a script when he discovered Lusting and says he fell in love with the actor even before he knew his compelling story which would form the basis for the film.

“When I was looking through tapes, Menashe showed so much humor and so much pain at the same time. He was the sad clown we hear so much about,” says Weinstein. “I just knew right away he could carry a film and be brilliant and people would want to watch him.”

Weinstein fashioned a story that mirrored Lusting’s own life. In the film, Menashe is a widower who works in a grocery store. He wants to reunite with his young son Rieven (Ruben Niborski) who’s living with Menashe’s brother-in-law Eizik (Yoel Weisshaus) and his family because the insulated community has strict religious codes requiring that Menashe remarry before he retakes his parental role. While trying unsuccessfully (and humorously0 to date eligible women, Menashe pleads his case with the neighborhood Rabbi (Meyer Schwartz). But even Mensahe himself seems unsure of his paternal abilities — until he violates the arrangement and spends some time with Rieven.

Filming over a one-year period, Weinstein whose documentary credits include Drivers Wanted (2012), about a taxi company in Queens and Flying on One Engine (2008) which he shot in India, worked with the non-professional cast but says very little of the film is improvised. “If they felt comfortable and looked natural, than [the take] was a success. If it looked like they were stumbling over lines or ideas, then we’d change it. We overwrote scenes to give the actors more meat then we’d cut details out. It helped the actors.”

Weinstein says some of his favorite movies, such as those of John Cassavetes or the Italian neorealists, used non-professionals with great success. But it is a risk.

“If you’re using non-actors, the whole film can fall apart. We didn’t just let everything fly. I look back at neorealism, at ‘The Bicycle Thief,’ so it’s not like I came out of vacuum; it’s a tried and true method,” he says. “I was not intimated by the process; it was more exciting. Each performer brought his own unique  personalities and tics and I changed the roles to fit what they could do, who they were, and how to be best selves.”

Weinstein gets a remarkable performance from Niborski who’s onscreen nearly as much as Lusting. Weinstein jokes that his secret tool with the boy was “Skittles.”

Niborski’s family, says the director, “cares about preserving Yiddish. … Ruben does not care about celebrity, he’s just a curious kid, with no pretensions. He just wanted to have a good time on set. I did screen tests with everyone. With Ruben, I called Menashe in and he looked at him and saw his own son. You see these first interactions; it was so perfect and so beautiful. I knew we had a movie. There was no question for me about that casting.”

He wanted to make his film in Yiddish for reasons of authenticity but for personal reasons, too. Weinstein’s great-grandparents immigrated to Brooklyn from the shtetls of Poland. His grandparents, though born in Brooklyn, grew up speaking Yiddish and Weinstein enjoyed hearing it when he visited them.

“It was the language of the Jewish people pre-World War Two. Then, post war, Hebrew became the de facto language and it evaporated,” says Weinstein. “I’m not saying this film will revive Yiddish cinema — that’s not my goal. I just loved that this was the language my grandparents spoke.”

Despite all the obstacles to making Menashe, Weinstein never doubted the viability of the project. “I was ready to roll with the punches because I knew I had Menashe and Ruben,” he says. “No matter what happened, I could write something and they’d hold the film together.”