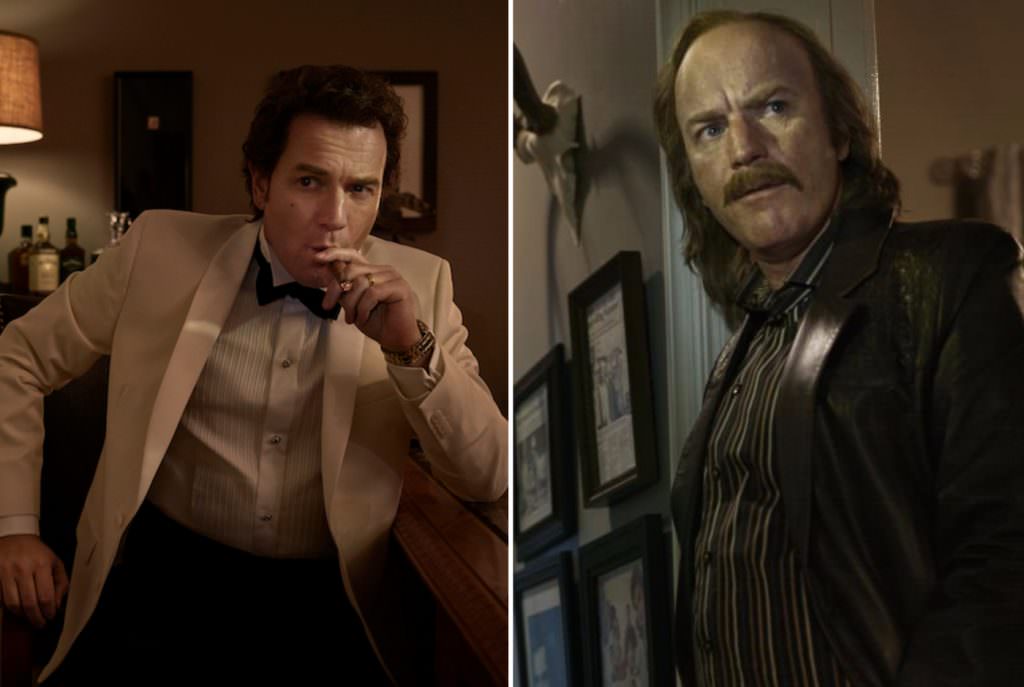 For years, Ewan McGregor yearned to play a role that required complete physical transformation, but the timing couldn’t have been worse when Fargo creator Noah Hawley asked the svelte actor to grow a beer belly. “I had a jawline that you could cut paper on and I’d never been so fit in my life,” laughs McGregor, who remembers returning to Los Angeles in top physical condition after shooting “Trainspotting 2” in his native Scotland. At the suggestion of an FX executive he bumped into on a Utah ski slope, McGregor binge-watched Fargo‘s first two seasons. Wowed by the limited series’ “spectacular writing” and mordant tone, McGregor met Hawley at a Los Angeles restaurant and pitched himself in the dual roles of pudgy Minnesota parole officer Ray Stussy and his steely older brother Emmit.

McGregor, Emmy nominated for his performance,  says “I ordered this little salad and during the main course I said ‘I’ve been thinking Ray should be heavier so maybe we could get some sort of prosthetic piece around my neck to give me a double chin.’ Noah just looked at me and said: ‘Ewan. You’re going to have to put on some weight.’ As an actor, I’d been waiting all my life for the ‘get fat’ note but now it comes when I’m in such good shape – – I was like ‘Noooo!’ But I knew Noah was right: Ray lives in a very cold place and he’s not into exercising. I ordered a massive desert and plowed straight into it.” Over the next few weeks, McGregor loaded up on fat and carbs. “I put three inches around my waist and bought four new pairs of jeans,” he says. “I called them my fat boy jeans. I figured that would get me through the shoot.”

When he wasn’t gorging on French fries, McGregor prepped with longtime dialect coach Elizabeth Himelstein to master the Minnesota accent made famous by William H. Macy in the Coen Brothers’ original 1996 Fargo movie. “It’s by far the hardest accent I’ve ever worked on,” says McGregor, whose resume encompasses cartoon French (Beauty and the Beast) and southern gentleman (Big Fish). “Sometimes you feel like you’ve slipped into a bad Irish accent,” he elaborates. “Other sounds are Scottish and some are Scandinavian. It’s kind of bonkers. The characters say ‘You know’ a lot, so my longest battle came in making my Scottish ‘no’ into a Minnesota ‘no’ without going overboard.”

By January, when a newly paunchy McGregor stepped out of his trailer onto the sub-zero Calgary set of Fargo, he sounded believably Midwestern and looked unrecognizable, as Ray, in his nearly-bald hairpiece and prosthetic nose. To perform scenes as the lean, mean Emmit, McGregor slimmed down by squeezing into a Spanx top. “Not only was it quite good for getting rid of the belly, but when I strangled myself into this very tight tee shirt, it changed my posture and made me feel different from Ray,” McGregor recalls. “Once I put on the curly wig and dressed up in his second-rate snazzy clothes, I knew how Emmit was supposed to move and talk.”

As for character psychology, McGregor got into Ray’s headspace by picturing him as an anti-social dude whose life’s been turned around by his ever-scheming girlfriend Nikki (Mary Elizabeth Winstead). “At work, Ray’s really rude and has no respect for people because he’s got no respect for himself, but he absolutely adores Nicki. It’s quite endearing, I think, and funny as well to see Ray suddenly switch into being a pussy cat when he’s around Nicki.”

As for Emmit, the self-proclaimed Parking Lot King of Minnesota, McGregor modeled the character in part on Donald Trump. “Emmit’s a capitalist, so Trump becoming president was quite useful for me as I prepared to play this man who’s just about making money. At seventeen, Emmit knew what he wanted and tricked his brother to get it.“

McGregor’s doubles act climaxes six episodes in, when Emmitt kills Ray by accidentally shoving a shard of glass into his neck. The day he filmed the showdown, McGregor came down with a massive case of the flu but barreled ahead with two body doubles. “We shot the Ray stuff first opposite my friend Steve, who doubled for Emmit. I was thinking about how Ray left his girlfriend Nikki in a hurry, didn’t give her a kiss or a proper goodbye and now they’ll never get a chance to have the life they dreamed. That felt quite desperate to me so I wanted to find a pathetic position for Ray to die in. I went to my knees, tipped over and ended up in this very awkward place. I thought it was kind of a cool position for Ray to be in as he dies.”

After McGregor acted out Ray’s death throes, he played the other side of the scene. “Our body double Paul watched all the takes of me being Ray so he was able to mimic the lines and the timing. I just played off what I had already done as Ray. By that point, I’m not really thinking about breaking down the moments. I’m just in it. That’s how I did all the Ray-Emmit scenes: I was totally Ray when I played Ray and totally Emmit when I played Emmit. They didn’t get in the way of each other because these brothers have completely different spirits.”