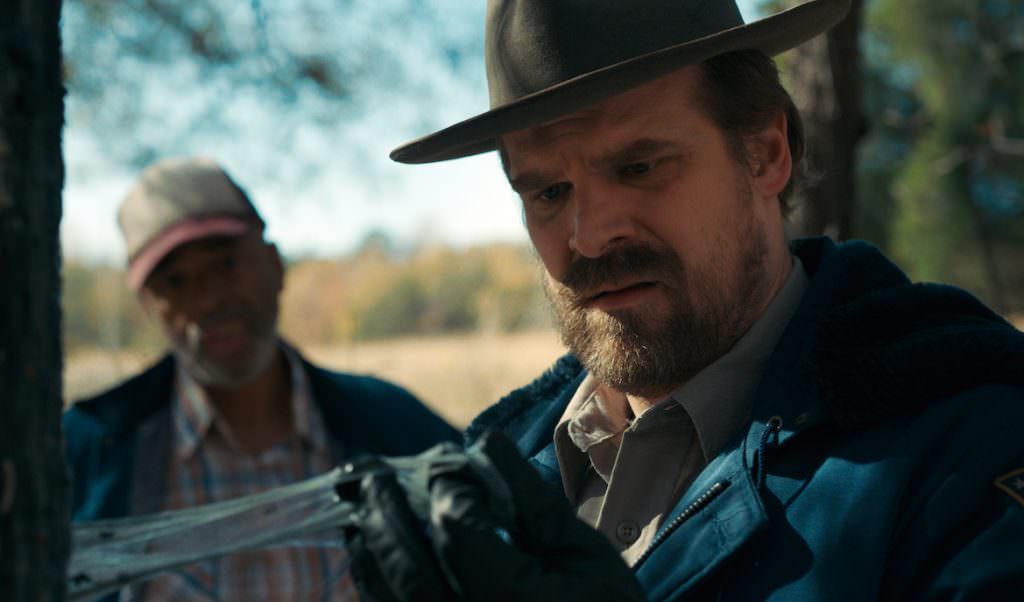 Stranger Things‘ David Harbour on his Spin on Hellboy

After his breakout performance as police chief Jim Hopper in Stranger Things (practically the only adult who made any strides to combat the chaos in Hawkins, Indiana, save for Winona Ryder’s Joyce Byers), David Harbour nabbed the role of Hellboy in a new telling of the demon hero, titled Hellboy: The Rise of the Blood Queen. The film is well into production and Harbour opened up on Josh Horowitz’ Happy Sad Confused podcast about tackling the character. Comic lore has it that Hellboy was conjured by the Nazis and rescued by the Allied forces, but it seems this movie won’t be diving into all of that.

“There is something of [his origin], but it’s not really an origin story movie. We kind of pick up the movie like we’re running and gunning. We do have a little bit of stuff where we show stuff, but it really is a story and you just drop in with this guy,” Harbour told Horowitz. “In a way, I feel like that’s kind of what Indiana Jones was. You start with him stealing the idol, but also you do go back to the university and you understand he’s an archeologist, but this is just a guy who goes and steals idols and fights Nazis and wants to steal the Arc of the Covenant. But you never go back when he’s a kid and you’re like, ‘How did he become Indiana Jones?’ It’s like no, we accept that this is Indiana Jones and I think that’s what our story does too. You accept that there’s this half-demon guy running around the world and being a paranormal investigator and solving crimes and also dealing with his own issues at the same time.”

Most moviegoers know of Hellboy thanks Guillermo del Toro’s impassioned films, with the title role memorably embodied by Ron Perlman. The last time we enjoyed Hellboy’s company was in Hellboy 2: The Golden Army in 2008. Fans always hoped that Del Toro would round out the trilogy, but a third film was never developed. Director Neil Marshall, who has helmed two Game of Thrones episodes, is starting fresh with the character. Harbour acknowledges that Perlman’s performance is a big presence to follow, but he feels he can find something new to bring to the character.

“It’s unique and odd. There are things that I’m gonna do that are different. Hellboy is the same character from the comics and from what Ron did, there are certain things that are the same thing, but I do think that—I don’t know, there’s a different approach because I sort of highlight different things, I think, than Ron does. Ron sort of embraces this machismo in himself and in Hellboy, and I really like it and it’s super fun and it’s a super fun performance, but I think Hellboy has a certain psycho dynamic where occasionally he has to prove that he’s the lion, has to roar, and I think he struggles with his own masculinity. But I don’t think he needs that as much as maybe those other movies. I have a bit of a different take on his capability or his slickness. I sort of think that for me he’s a little less skilled at constructing that persona.”

Hellboy: Rise of the Blood Queen does not have a release date yet, but production is moving forward and could be released in the coming year.