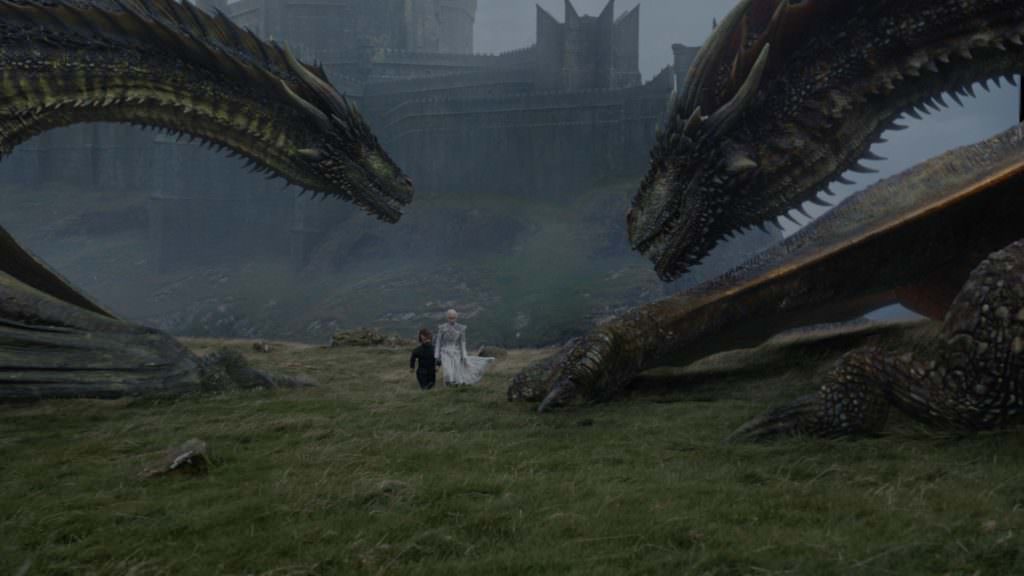 Questions After Game of Thrones Epic “Beyond the Wall”

While we mourn Viseron and muster courage for the fight ahead, we’ve got plenty of questions after Game of Thrones epic penultimate episode “Beyond the Wall.” (You can read our recap here.)

What happens now that Jon’s finally bent the knee?

After weeks of demanding Jon bend the knee, all it took for Dany to get her wish was for Jon to see her swoop in atop Drogon and save his crew from certain death. But now that Jon’s pledged himself to her, what happens next? He’ll need to North to declare their allegiance to her as well, but things in Winterfell are bleak. The Stark sisters are, for reasons that are really irksome and not terribly convincing, at each other’s throats. Really it’s Arya whose behaving like a bitter checkers player in a world of deadly chess, but Jon will need the two of them, and the lords of the North, to bend the knee to a southern queen, no easy task even under the best circumstances, and surely potentially impossible with the in-fighting and with freakin’ Littlefinger creeping around.

Are we witnessing the end of House Stark?

No house has suffered quite like House Stark, and what a bitter pill it’ll be to swallow if the once proud family that ruled the North is finally obliterated beacuse the two remaining Stark women can’t get along. Their newfound acrimony is Littlefinger assisted, of course, but Arya’s fury, even with Littlefinger’s prodding, seems completely unwarranted and borderline insane. With Jon Snow off pledging loyalty to southern queens and Bran having renounced his name (and claim on the North), the Stark sisters are absolutely crucial to keeping House Stark intact, and the North from splintering into useless fiefdoms. Unless Arya and Sansa are pretending to fight in order to throw off Littlefinger, their growing hostilities could be the final dagger in the heart of House Stark, after so many previous daggers, no less.

Why was that zombie polar bear not a part of the Night King’s dead army?

Every other thing that becomes dead seems to serve the Night King, including the giants we saw marching in his army, so why was that zombie polar bear just out in the vast, frozen hinterlands alone? Not a terribly important question, but it nags.

What becomes of Beric now that Thoros is dead?

That dumb zombie polar bear did a number on poor Thoros, who died later from his wounds. This leaves Beric without his priest, the man who revived him six times. Now with Thoros gone, Beric’s officially on his last life. His original mission, way back when, was to kill Gregor Clegane (The Mountain), on orders of Ned Stark. Now Beric his paling around his the Mountain’s brother, the Hound. Perhaps he’ll help connect these two in the Cleganbowl everyone’s praying for. Perhaps Beric still has some other, crucial role to play. It was quite arresting when Thoros replied to Jon’s claim that “Daenerys is our only chance,” with “No, there is another.” What does this mean?

Why on earth did Sansa send Brienne of Tarth to King’s Landing?

Usually not a good idea to send your sworn protector to your enemy’s stronghold, but that’s precisely what Sansa did when she demanded Brienne represent House Stark at a meeting in King’s Landing. Sansa claimed Brienne would be safe thanks to her friendship with Jaime Lannister, but this seems tragically misguided. Why wouldn’t Cersei kill Sansa’s sworn protector? Or at least keep her in King’s Landing as ransom? Perhaps Tormund will get to visit King’s Landing, after all, and spring his love from the Red Keep?

Can anything kill the Hound?

He might be even more unkillable than Beric. Not only did the Hound save Tormund, he survived the battle with the dead pretty much unscathed, despite his impossibly stupid rock throwing fiasco that allowed the dead to swarm them.

What does a wight dragon breath?

Would it make sense that an ice zombie dragon breath fire? Or could a wight dragon breath ice, somehow? Could an ice breathing Viseron square off against a fire breathing Drogon? Can this please, please happen?

If they survive the Night King, will Dany usher in democracy to Westeros?

To her great annoyance, Tyrion kept thinking about the long-game this episode, and she kept ignoring him. He told her not to ride into save Jon Snow on her dragons, worrying that putting herself at such a risk would potentially destroy the cause for good. She disagreed. Tyrion has also mentioned Dany’s possible successor (she can’t bear children, hence her dragons being her “children”), and in doing so, brought up the Kingsmoot and The Night’s Watch elections, both of which are the most democratic versions of power sharing in Westeros. Might Dany, provided she survive all this madness, set up some kind of actual vote to see who rules when she’s gone?

Will Dany and Jon…

The looks? Smoldering. The hands? Holding. Dany and Jon both saw the best of each other in that epically misguided battle beyond the Wall, and once they were reunited, belowdecks on the ship back to Dragonstone, you could have cut the sexual tension with Longclaw. Jon even called her “Dany,” a very familiar, intimate name to describe your queen.

Dany is a woman of feeling, but also one who wants to rule. She left Daario in Meereen for precisely this kind of potential pairing. And if you’re thinking, but wait, Jon doesn’t even know about his Targaryen lineage and when he finds out, that might keep them apart, you haven’t been watching Game of Thrones this whole time (Cersei and Jaime, anyone?). Besides, the Targaryens have long married their relatives, and no one could argue with the power that a Dany/Jon union could wield.