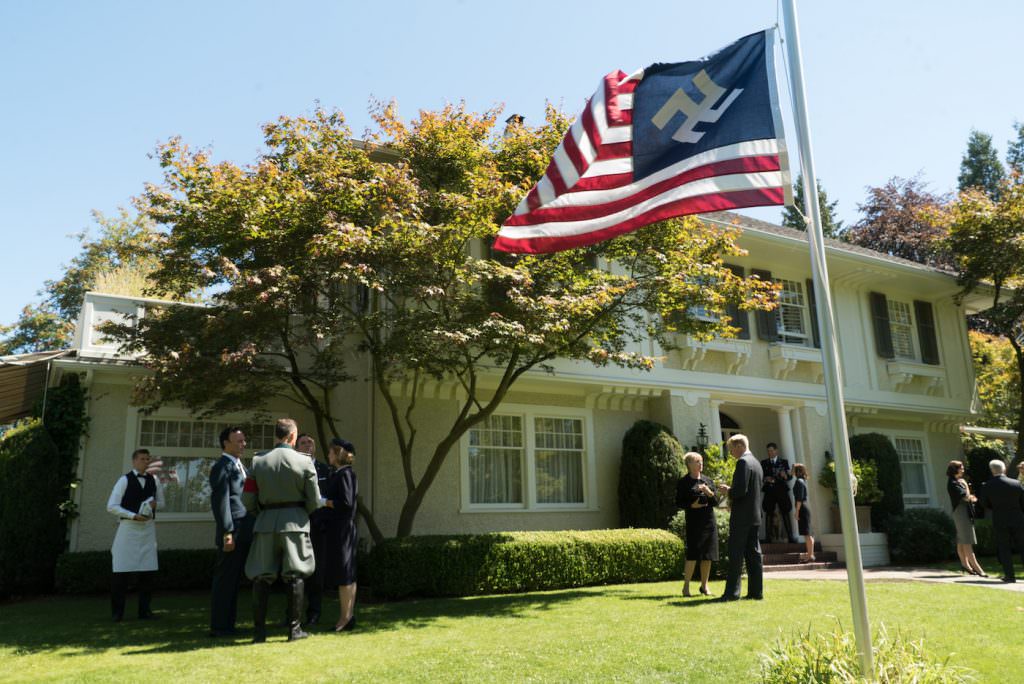 Phillip K. Dick’s 1962 novel Man in the High Castle imagined the horrors of living in an America where the Allies were defeated in World War II. The series follows Juliana Crain (Alexa Davalos) who refuses to accept the terrible outcome and believes that things could be another way. Production Designer Drew Boughton has received two Emmy nominations for his harrowing interpretation of a world in which Nazi Germany has seized most of the United States while Imperial Japan controls the west coast. Boughton’s work weaves strong and subtle details to build an unsettling environment where fascism prevails. The show’s team did extensive research to recreate the 1960s, but there was no real historical reference for the ways an American defeat in the war would have changed the way people lived. Boughton had to find creative answers to what an Imperial Japanese and Nazi Reich influence would have had on buildings, cars, and daily design.

We spoke with Boughton about creating a fascist nightmare, the details that make the world seem real, Hitler’s terrifying plans that inspired the show’s design and more.

Man in the High Castle takes us inside a world that fortunately never happened. How did you create a world that was similar to our history but different in major ways?

In a period show you can essentially copy old photographs and try to put that on screen and create a period world. That’s a very familiar process that many designers and teams do. What’s different about ours is that you do all that same kind of work that you would do in a standard period piece and then we deconstruct the period and figure out which things would not have happened at all and which things would be different. Then we all collaborate on how we’re going to do that. All of those conversations to try to come up with this unsettling fascist “what if” world.

I know this show takes a lot of collaboration with the VFX team. Do you have more practical or CGI sets?

It’s more like 90% built sets in our show. The only set last year that was really a VFX set was the inside of the Volkshalle dome. We built the podium where Smith and Himmler and the dignitaries are speaking. It was a physically built set on stage with a green screen around it. We had a marble floor for the soldiers to march on and for people to stand on. Individual groups of people were photographed against green screen and then combined into the CG model. As a general rule, people often think if there is some CG in a show, then the whole show is CG. That’s not quite the case with us. The singular brilliance of the VFX team is stunning, but we have a lot of super talented carpenters and painters and set decorators who physically create 90% of everything else you see. 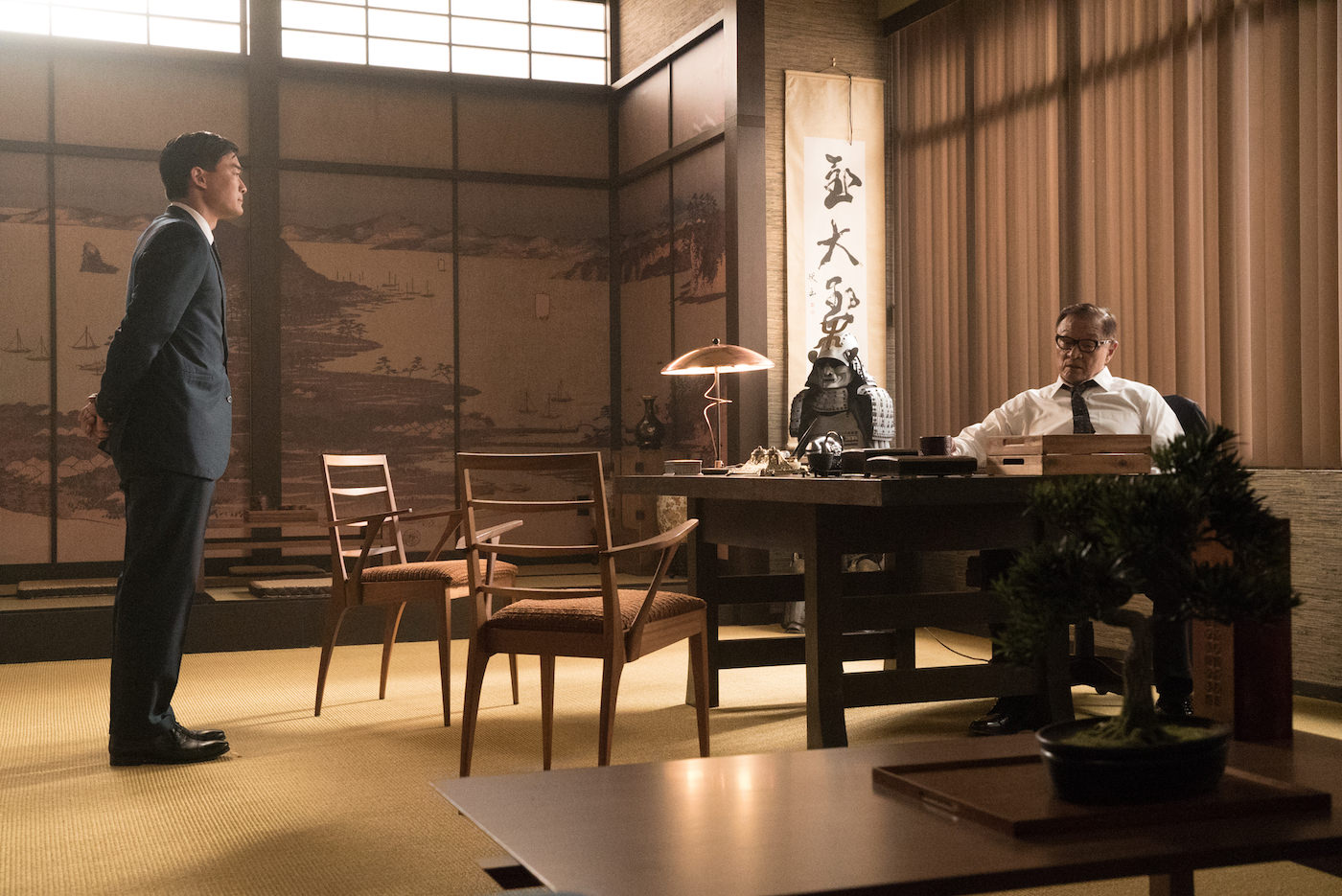 How do you go about adding details to transport us to an America that’s been occupied by Imperial Japan and Nazi Germany?

John and Lisa Lancaster, who are co set decorators, have a huge team of people. You have a street that needs to be filled with Imperial Japanese set dressing and outdoor markets and telephone booths and things like that. By contrast you have the Nazi Reich parts of the show where the same thing has to happen. We have warehouses full of set dressing items. We have a whole warehouse of picture vehicles that are specifically Japanese for our Imperial Japanese world. Then we have a whole other area where we’re stowing picture vehicles that are intended for the Greater Nazi Reich which are a lot of Mercedes and German cars and plain American cars. When you put together those items on a street somewhere with the right set dressing and the right period cars, you can really take people to those contrasting worlds. If you add a city scape at the end of the street, or a mountain range, or the Golden Gate Bridge, or a Manhattan skyline, that’s an example of how everything works together to create these pictures.

Was there anything in your research that helped you visualize what an Ally defeat in WWII would have looked like?

One of the things we saw in our research was how if the Nazi’s had won, there were architectural plans in place to build a reimagined version of the city of Berlin. Hitler and Albert Speer, the principal architect, had plans to build this magnificent new world capitol in Berlin. Fortunately that didn’t happen so those things were never built, but architectural plans and models were left behind. We thought that one of the ways to show the horror of our alternative world would be to build some of those things. 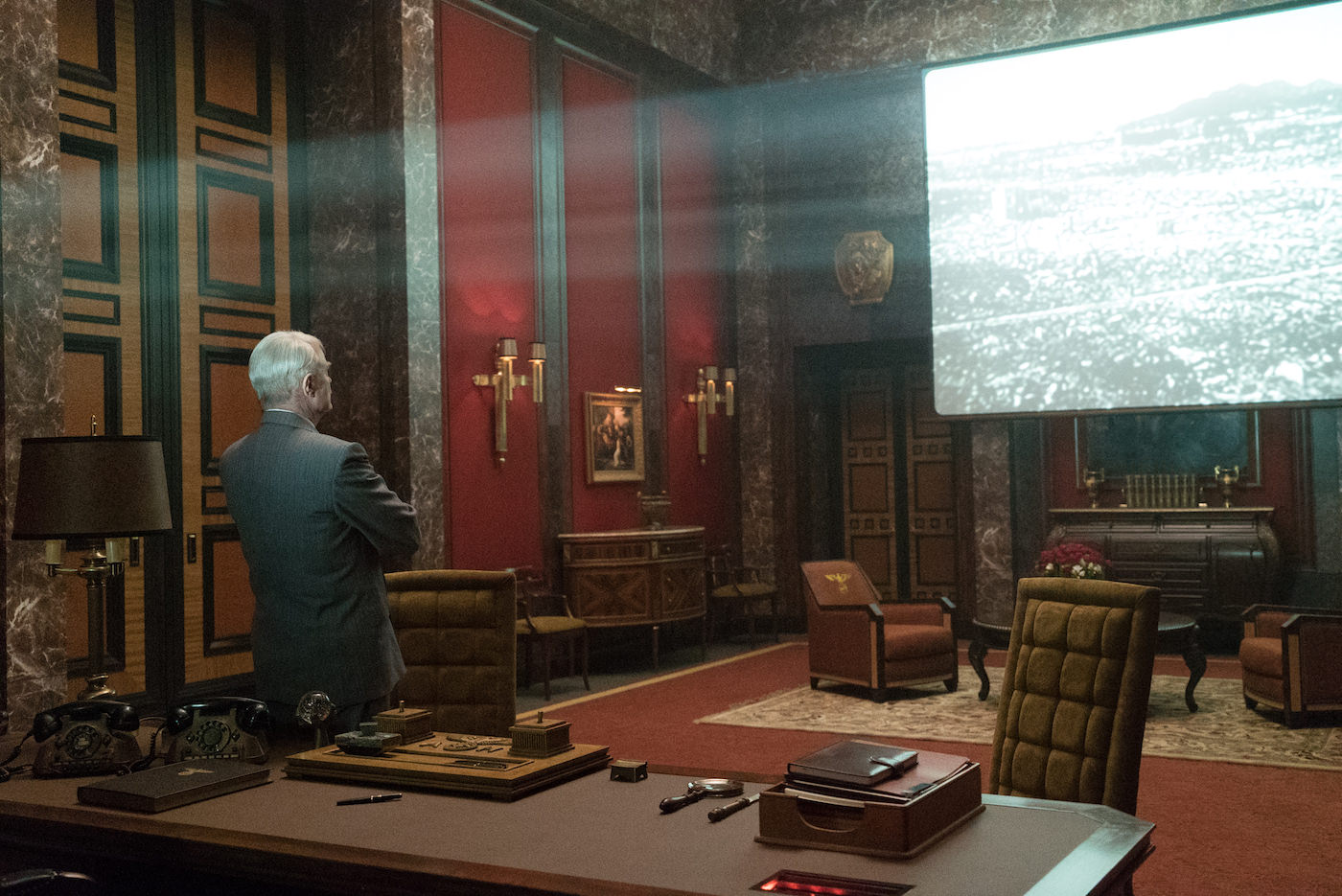 That’s a chilling thought. How did you make those plans a reality?

We created a 3D model in the art department and used the landscaping of Berlin in season 1. In season 2, the decision was made to actually go there and show what that would be like and what Hitler’s new offices would be like attached to that complex. The dome was a 3D VFX set, but we put inside of it a podium and adjacent to that podium we built a set for Hitler’s new office which we shot a lot in the second season. We looked back at the 1930s Life magazine photographs of Hitler’s real office, which was really an interesting exercise. The set-decorating department looked at Hitler’s actual desk of which there are actual photos and we built a desk that looks like that. It was a very elaborate, complex piece of furniture to make. That set that we built has custom marble wallpapers of contrasting tones and woodwork in the doors. These are all elements that came from looking at the photographs of the Reich chancellery that had been designed and were subsequently fortunately destroyed by the allies in WWII.

In the show, the west coast is controlled by Imperial Japan and most everything east of there is the Nazi Reich. How did you decide what the neutral zone in between would look like?

In the first season we established a color palette for the three areas. In the Greater Nazi Reich we used the color palette of German military uniforms: swaths of grey and a red accent and a lot of black and silver. In the Japanese controlled areas we used the warm greens of the Kenpeitai uniforms and the aquatic water of the oceans of the west U.S. There were a lot of aquamarine colors: watery blues and grey-blues. The neutral zone was the area where people of color and the unwanted and unwelcome in the other areas couldn’t live. It’s a place where people could live without persecution. We set the palette for that as all colors but faded. We gave ourselves the gift in the neutral zone of conceptually and creatively accepting all colors in terms of who’s there but also what the environment looks like. These colors extend from wardrobe to the color of the automobiles. It was hanging onto a lost period and better time in the past. We maintained all of those colors from the 1930s and before and added 17 years of age and old nicotine and dust. 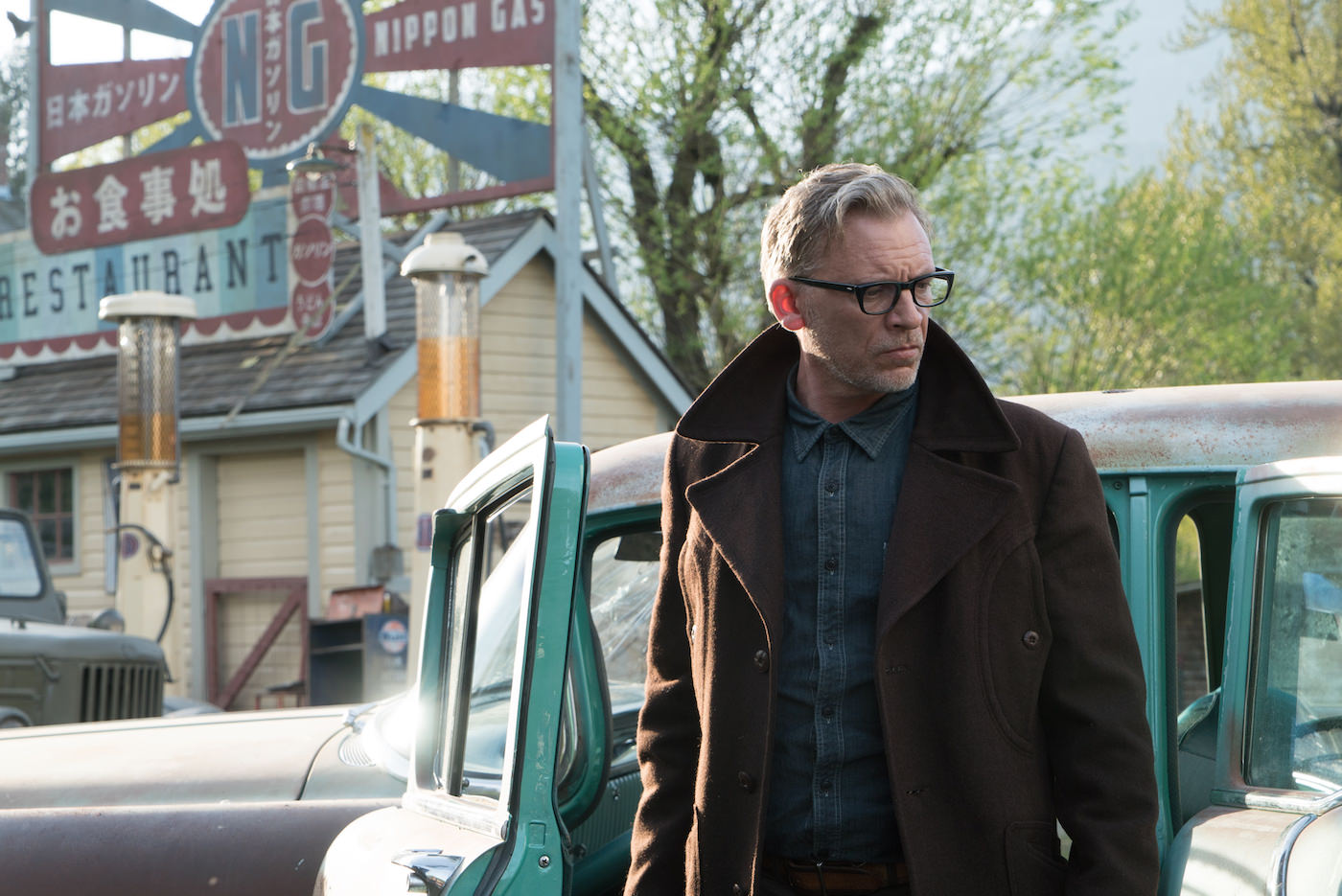 Callum Keith Rennie as as Gary Connell in Man in the High Castle. Courtesy Amazon Studios

What do you hope audiences take away from watching the show?

I wish that our message had been heard earlier.  1962 was a time where we had just decisively defeated the Nazis in a way that everyone who was living had participated in it. Today we are living in a time where many of those people and the victims have passed away. I think Phillip K. Dick was trying to remind Americans that it can happen here and we have to be very careful to make sure that it doesn’t. We are trying to hold up a mirror. This is not a good thing. It’s not a positive thing and it should not in any way be seen as anything other than condemnation.