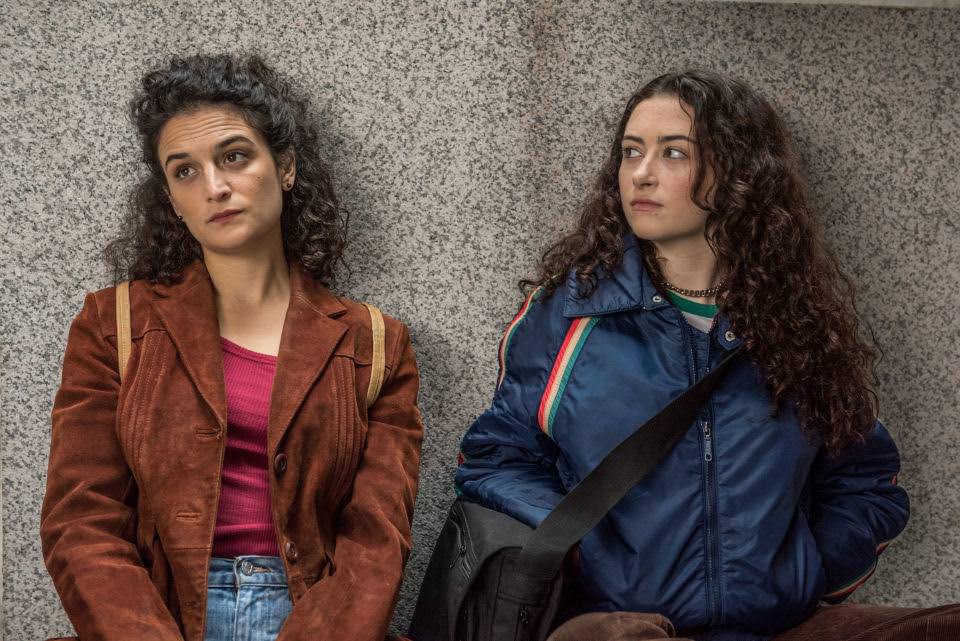 Most of us would like to think that the 1990s weren’t that long ago, but the age of dial up Internet, CDs and home phones has already been made into period piece Landline. Love or loath what you wore at the end of the millenium, you’ll definitely recognize some of these looks. Costume designer Elisabeth Vastola combed through consignment racks to revive the era in a recognizable and authentic way. Set in New York, Jenny Slate’s character is fashion forward while her younger sister, played by Abby Quinn, is still finding her look. Vastola’s designs will bring on a serious case of nostalgia and might even inspire some ‘90s style revivals.

Vastola spoke with us about New York fashion in the ’90s, revisiting a period the audience will likely remember, and her work on the upcoming season of Jessica Jones.

A lot of people who will see Landline lived through the ‘90s. What was it like to explore a time that wasn’t so long ago?

That’s one of the exciting parts about this film is that I don’t think in recent times the ‘90s has really been investigated by filmmakers. We’ve seen the ‘80s come back in filmmaking and television, but the ‘90s has been somewhat untouched. It’s exciting for me to delve into that. What we tried to do is have enough moments that a broad audience could touch into and say, “Oh my gosh, I totally remember that. That feels familiar to me.” But keep it specific for character and story and also for New York City.

The movie is set in New York. What was fashion like in New York in the ‘90s and how did that affect your designs?

Most fashion trends that really hold on in New York are ones that allow people to move in and out of the city and feel active. You’re in and out of the subway, in and out of an office building, constantly walking. The clothes felt industrious and gritty and not super pristine or prim or. Nothing that felt like you couldn’t run outside the building and immediately go out. We made sure that everybody felt like they could move throughout the day. Be at an office at a desk and then translate to going out or being on the subway or going to a movie or whatever it was.

How did each of the characters influence the designs that you put them in?

Each of the main characters has a different style or trend that was going on in the city at the time and each were part of a pretty dissimilar community. Dana, Jenny Slate’s character, was working at Paper Magazine in the movie, which was a pretty progressive, cultural fashion magazine at the time. I’d say the fashion trend there would have been a little grungier, conservative baby doll, with a little bit more world influence. Definitely earthy colors, earthy fabrics, and straddling between the more classic grunge trend that you saw come back nationwide.

What about her younger sister, Ali?

She’s pretty, but she’s still in high school, so there’s a little bit more of an innocence there that she’s holding on to. She wears certain tops that she’s probably had for a long time that feel a little bit more adolescent. But then she’s dipping into this New York City rave culture that started to progress at the time, so she’ll have spots of neon or brighter colors or little metallic accents around her neck or her shoes or footwear. Little beanies. It’s a potpourri of where she’s come from as a child and then dipping into this more exciting, new nightlife culture that has sprung up in the ‘90s.

All of the clothing in the movie feels authentic. How did you avoid making a caricature of that era of fashion?

One of the main goals that we had was that we wanted the audience to be able to look at the screen and feel like you knew the characters. We never wanted an outfit to feel like it was some kind of gimmick or so out of character that it just felt like something we were placing there just for ‘90s fashion sake. No matter what period you’re working in, if the look feels true to the character like something you would legitimately see in that character’s closet and if the actress feels natural in the look then it will become a seamless part of the fabric of the visuals of the film. If it feels a little too out there for the character or doesn’t ring true or authentic, that’s when it becomes something that feels kind of gimmicky and might take the audience out of the story.

Some of these fashions are still inspiring designers today. Did you source your pieces from new clothing or buy authentic ‘90s pieces?

We tried to stay as close as we could to shopping consignment and thrift in New York. It was tricky because the ‘90s have come back into fashion and it’s in all the layers of fashion. In high fashion you can see it in department stores. It was very tempting to lean on that and to borrow things that are actually contemporary pieces. But even if you feel like ‘90s trends are back in style today, they’re still being filtered through a modern designer’s eye. So we were successful in shopping only consignment, vintage, and thrift. There were a few builds for the Halloween costumes, but other than that if we couldn’t find it in New York we’d go to sources I have in my back pocket all over the country. I never wanted to go into a present day store and lean on that because I knew there would be something different in the way it’s made or the fabrication and it would just sort of bring you in some way. Those little details really help to sell the period. 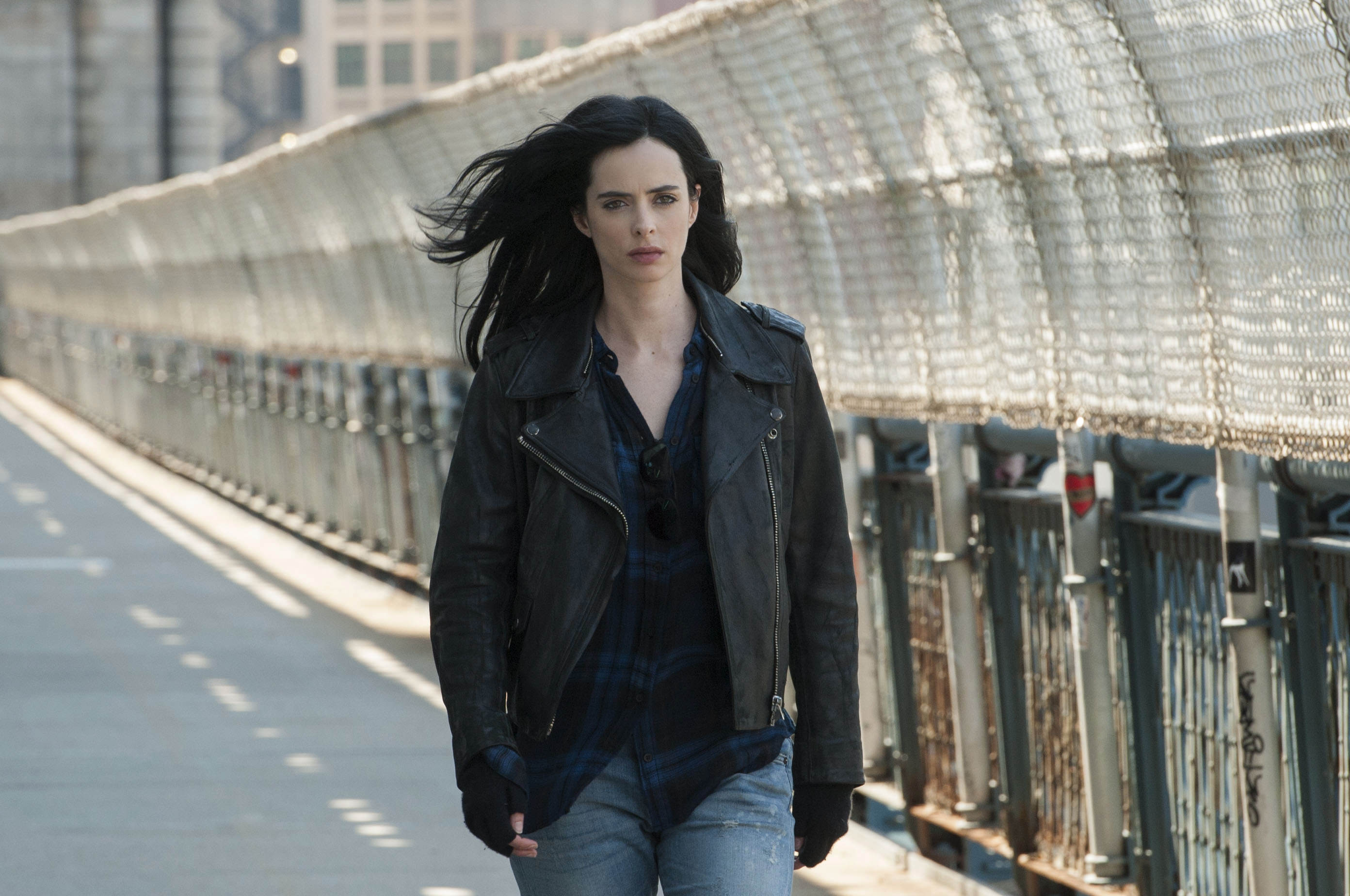 You’re now in production for Season 2 of Jessica Jones. She’s a character that doesn’t have a recognizable super suit. How do you choose the looks for her?

It always starts for me with her character and less from a fashion place. Jessica wears her clothes in a way that makes sense for her character and she’s not someone that’s preoccupied with fashion. An attitude like that towards clothes is refreshing in modern television. We always start with what feels appropriate for Krysten? What does the outfit have to do over the course of an episode? Where does it travel? Where does it take us? And I always just want to start first and foremost with how the character’s feeling, and what mental space she’s in. And work from there, and have that dictate what she might pick out from her closet. If she’s feeling particularly good one day you might go for one choice. If she’s feeling particularly sullen another day you might go for something else. I wanted to subtly reflect where she’s at. She does have a limited wardrobe by design, but she’s still making choices when she decides to pull one tank versus another. And it might just be the tiniest little hint at where she’s at. But for the most part, clothes are not a focus of her character. She puts on clothes that are comfortable and feel appropriate and that she can move in and that she feels strong in.

She’s a very active character. How do you make sure she is in clothing that allows her to fight crime?

We always make sure when she’s trying things on that she feels comfortable and that she can move in. Everybody’s had some sort of experience where you put on one pair of jeans and they feel stiff, and then you put another pair on feel super comfortable in them. The beauty of having time, now that we’ve been in her jeans, is that she’s been able to wear them in and they almost feel like a second skin to her. The denim breaks down, the fibers soften, and I love that idea that she hangs onto things that she’s had for a while because everybody has their favorite thing in their closet that they just can’t let go of that has gotten better and better over time. We live in a fashion culture where it’s a lot of disposable stuff, but I believe in having things that you hang on to and that sort of grow with you as well. It’s nice to explore that with Jessica’s character.