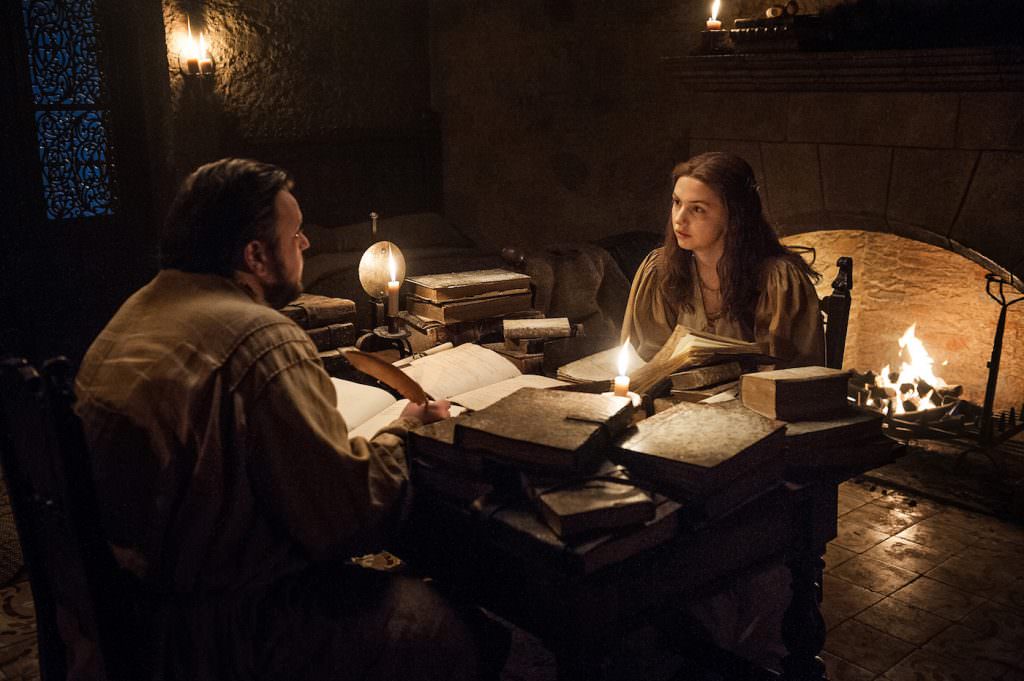 Is Gilly’s Possibly Deadly Discovery Game of Thrones‘ Most Important?

We’ve been trying to unpack the many major reveals in “Eastwatch,” Game of Thrones fifth episode this season. There was Gendry’s return, which will certainly have major ramifications for Jon’s war against the Night King. There was the hoarse whisperer himself Peter Littlefinger, and his machinations to tear the Stark sisters apart. And then, of course, there was Cersei’s revelation that she’s pregnant (and she’s telling the world Jaime’s the father), which could perhaps be just another chess move in her perpetual, very personal game of thrones. Yet the biggest reveal in the show came from the most unlikely place; Gilly.

Gilly is sitting there practicing her reading, poring through a book by a Maester Meynard, an obssessive fellow who apparently recorded every single thing that happened to him every single day (including his bowel movements). But Gilly’s not just practicing her reading, she’s peppering Sam with odd, “useless” facts from Meynard’s tome as he begrudgingly transcribes a bunch of old books in his ceaseless, and what he feels pointless work for the Maesters. Hey Sam, she asks, do you know how many stairs are in the Citadel (15,782), or how many windows are in the Sept of Baelor (here Sam reminds her the answer is none, as there is no Sept of Baelor anymore), and so on. Sam’s getting super annoyed.

Then Gilly asks Sam what an annulment is, and Sam cheekily retorts, in a tone, that it’s when a man sets aside his lawful wife. Gilly either doesn’t pick up on his tone or ignores him, because she’s too interested in her newfound ability to read, and, she’s got a major bombshell to drop, even though she doesn’t realize it:

“Meynard says here that he issued an annulment for Prince Rhaegar and remarried him to someone else at the same time, in a secret ceremony in Dorne.”

If Sam had been paying attention, and knew a bit more of the backstory, he may have realized that Gilly just revealed a literal game changing bit of information. Here’s what Sam missed, and why it’s important:

The Rhaegar Meynard is writing about is Rhaegar Targaryen, the older brother of Daenerys Targaryen, formerly married to Elia Martell (sister of Oberyn Martell, they guy who should have stopped gloating and finished the Mountain off before he had his face crushed).

Rhaegar was the son of the Mad King Aerys Targaryen (the one Dany is always promising she won’t be like), and he used to have a major thing for Lyanna Stark, Ned Stark’s sister. The problem for Rhaegar was that Lyanna was married to Robert Baratheon (Gendry’s father),  and one of the founding legends to modern Westeros has always had it that Rhaegar kidnapped Lyanna, raped her, and left her for dead. This is what led to “Robert’s Rebellion,” when Robert dispatched Rhaegar and the entire Targaryen line, Jamie Lannister earned his kingslayer name and murdered Aerys, and Robert fought his way into the Iron Throne. Yet here’s the thing; we already knew this isn’t what happened at all.

Gilly’s reveal adds a major legal component to what we alreayd learned last season; that Rhaegar never kidnapped Lynanna—they ran off together because they were in love. This true history was glimpsed by Bran towards the end of season six, when a young Ned Stark happened upon Lyanna at the Tower of Joy, where she was being protected by Rhaegar’s elite knights. Ned managed to kill them and get into the tower, where he found Lyanna dying after having given birth, and begged Ned to promise that he’d raise the child as his own bastard son. As we all know now, that child is now the King of the North—Jon Snow.

So Jon’s true parentage hasn’t been in question since the above scene, but Gilly’s discovery that Rhaegar and Lyanna had been legally married by Maester Meynard means that Jon Snow was the rightful heir to the Iron Throne at the time of his birth. This would mean that Rhaegar’s sister, Daenerys, whose claim to the Iron Throne rests upon her name, now has a legal challenger. Add to this fact that Jon and Dany are slowly forging an alliance, and a friendship (or something more, even though he’s actually her nephew), and you’ve got the makings for a massive shock for all parties involved and, depending upon how they react to the information, he transformation of allies into enemies.

Dany was already surprised at how good Jon was with Drogon, a bond that can only form that quickly when there’s Targaryen blood running through you, but Jon doesn’t just have Targaryen blood running through him, he’s also a Stark, giving him a claim to the North and the South, something Dany would likely have trouble swallowing. She’s just spent years in a tortuous journey, having been bought and sold and reformed into the Mother of Dragons, amassing power, breaking chains, becoming the Queen of various far off lands, and finally arriving in Westeros to rid the world of Cersei Lannister and her ilk, only to find out, after all that, that her surprise nephew is the one who gets to sit on the Iron Throne?

Will Jon, or somebody on his behalf (cough Sam cough) figure this out for him? And if so, will he agitate to claim what is legally, rightfully his, provided he can kill the Night King and his army of the dead? And how might Dany respond to this most unwelcome news?

There’s a grand total of seven episodes left for this work itself it out, and you can thank Gilly for potentially making things even more complicated, and deadly, in Westeros.