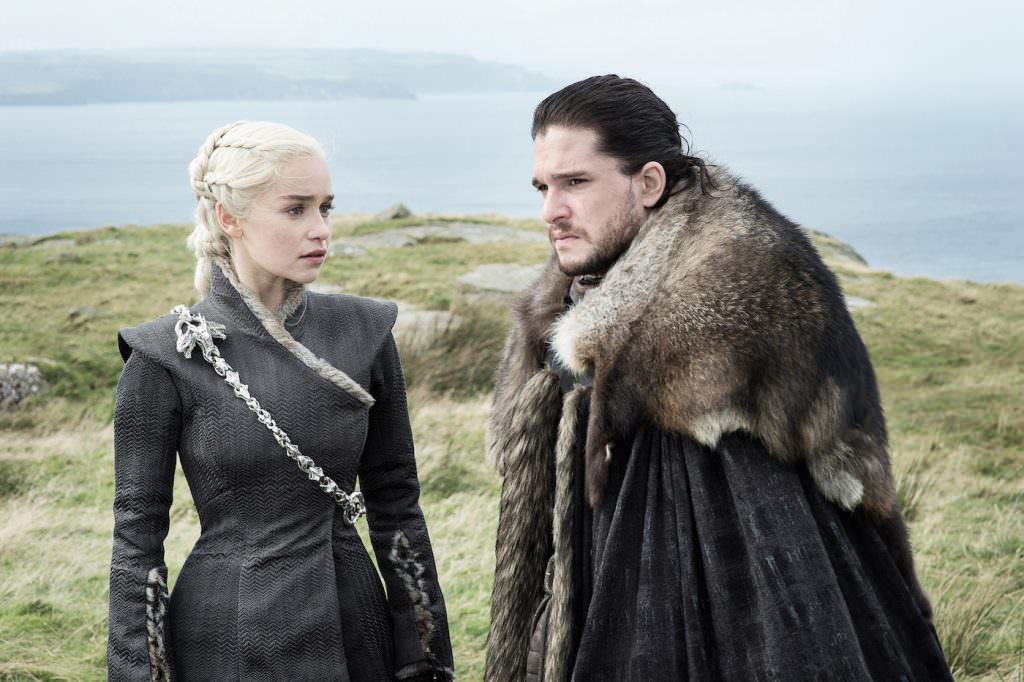 First things first; the thing from last week’s episode, “The Spoils of War,” that no one really thought happened didn’t happen. Jaime Lannister is alive and unwell thanks to Bronn. The two men gasp and gossip on the beach (Bronn not only saved Jaime from Drogon’s fire, he also dragged him up from the depths of the river), Bronn, as always, appearing slightly amused while Jaime, who is quickly rising up Game of Thrones Brooding Ranks, nearing Ser Jorah and Jon Snow levels, just looked sad.

Not too far away, on the other side of the river, the remaining Lannister army looked a whole lot sadder. “The more ruthless opponent will often win,” showrunner and Game of Thrones co-creator David Benioff says in the “Inside the Episode” video that HBO released shortly after episode five, “Eastwatch,” aired. He’s talking about one of Daenerys’ main complaints as she and Cersei Lannister face off; while Dany must somehow fight a moral war, Cersei is free to maim and murder anyone she pleases in her lust for power. GOT has always pitted Dany’s very Westerosi desire for the Iron Throne against her belief that she can be ruler of the people for the people, nothing like her father, the Mad King, and surely nothing like a Lannister. It’s hard to be good and win wars, though, especially against someone as ruthless as Cersei.

Dany’s version of “moral” leadership during a time of war is…questionable. As she presides over the captured Lannister fighters, including Randyll and Dickon Tarly, Drogon lolls around on a hill above them. Having a massive dragon as your backdrop is very heavy metal. After promising them she is not the madwoman Cersei has makes her out to be, she gives them a choice; bend the knee or die. Seems sort of mad, but okay. Most of the men are all to happy to serve Dany, but the Tarlys won’t be cowed. Tyrion tries to convince Dany to put them in a cell, or, send the elder Tarly to the Wall, but Dany won’t have it. By her logic, putting men in cells is no better than enslaving them, and as the breaker of chains, one of her 137 titles, that’s a nonstarter. Instead, she gave them a real choice, and they made it, so death. Only death at Dany’s hands eschews the usual Westerosi tradition of beheading in favor of a barbecue, with Drogon manning the grill. Seeing the dragon’s power used on two captives is more disturbing than watching it light up an entire regiment, which is precisely the effect Dany was going for. Randyll and Dickon are reduced to a pile of ashes.

Meanwhile in Winterfell, things between the Stark sisters are getting colder, and who, pray tell, do you think is lowering the temperature? Yes, the hoarse whisperer himself, Littlefinger. In last week’s “The Spoils of War,” Sansa was surprised, and it appeared a little frightened, of how well Arya sparred with Brienne, while Arya seemed just a little bit suspicious of Sansa being ‘Lady Stark.’ Remember, these girls were very different back when Ned was alive. In “Eastwatch,” however, things go from awkward to outright hostile. Arya openly questions Sansa’s handling of the Northern Lords (after finding out that Sansa was sleeping in their parents room, Arya seems even more put off), specifically suggesting she didn’t defend Jon enough. Arya suggests that what Sansa really wants is to be the ruler of Winterfell, and uses her increasingly creepy, cold-as-ice mind-reading skills to freak Sansa out. Meanwhile Littlefinger is aware that Arya is spying on him and leads her right to a piece of information he wants her to have—a Raven’s message that he concocted that “proves” Sansa is as traitorous against Jon as Arya thinks she is. After everything the Starks have been through, to finally reunite only to let Littlefinger destroy them? He may not be a preening psychopath like Joffrey or Ramsay, but Littlefinger is truly awful, his accent is all over the place, he needs a lozenge, and he’s one of the few characters left who is absolutely, 100% unlikable.

Jorah’s back! He has healed himself and landed on Dragonstone, and Dany is pleased as punch. She hugs him, which was courageous. He looks as Friend Zoned as ever, but happier than we’ve seen him since, well, ever.

While Littlefinger’s plans are more or less always some form of divide and conquer, over in Dragonstone, a zany strategy is developing; the way to get Cersei to understand that the White Walker threat is real, and therefore get her to help in the fight against them, is to bring a White Walker to her. That’s right; snatch up a Wight, somehow, and manage to take the thing on the long journey from the north to King’s Landing, dump it at Cersei’s feet, and hope the whole ice-zombies-are-real moment is enough to shock into becoming a team player for the very first time in her life. Seems…dubious. But Jon loves a dubious plan, and Jorah will do anything to prove how manly he is to Dany, so they’re both immediately in. This is yet another Tyrion plan, and by the Lord of Light does he need a win. Tyrion’s recent advice has had a rough stretch, with the Casterly Rock sojourning being such a bust, so let’s hope this “kidnap a wight” plan isn’t dead on arrival (ice zombie pun!).

In order to set this plan into motion, however, Cersei needs to agree upon it, which sends Davos and Tyrion on a mission to King’s Landing, where, with the help of Bronn, a meeting with Jaime has been arranged. You know, it’s unclear how Bronn was alerted to the mission—a raven? Bronn doesn’t seem like the message-by-raven type. Can Bronn even read? He surely can’t write. Oh my god imagine Bronn writing on one of those little paper scrolls! Picture Bronn’s penmanship. Hilarious! Anyway, Tyrion and Jaime have a secret (or so they think) meeting. It’s a potent little scene, with Jaime visibly conflicted between his love for his brother (you can see he still cares) and his commitment to Cersei, and the fact that he’s trying to be intimidating while holding a sparring sword with his left hand.

In the Citadel, Gilly’s annoying the hell out of Sam with her constant quizzes from the old books, but had the young maester been paying attention, he would have realized she just dropped a major bombshell; Jon Snow’s parents were lawfully married, giving him a direct claim to the Iron Throne. Yet, Game of Thrones characters are just like us! Sam’s too annoyed to pay attention and thus misses a crucial piece of information.

Back in King’s Landing, while Tyrion is testing the waters with his brother, Davos is on his own mission; finding Gendry (!!), Robert Baratheon’s bastard son. Davos spots him making weapons for the Lannisters in Fleabottom, and recruits him to help Jon in the fight against the White Walkers. Gendry!

Cersei continues to be ever full of surprises. She drops yet another bomb on Jaime. Two bombs, actually. First, she knew about the Tyrion meeting and allowed it to happen because she realizes she has no credible military options against Dany, so the order of the day is to outwit the mother of dragons. Cersei really is pretty great at this whole three dimensional chess thing, so lets hope that Tyrion is able to counsel Dany to believe nothing Cersei promises. Second, she’s pregnant! Not only that, she is going to tell the world the baby belongs Jaime’s, because, as their father used to say, Lion’s don’t inquire how the sheep feel, or something to the effect.

So who else is going to help Jon, Jorah and Gendry on their mission to extra rendition a White Walker? The fellas head to Eastwatch, where Tormund is not super delighted with the plan (he scolds Davos, pointing out that one of Davos’s roles is supposed to be talking Jon out of stupid ideas), but Tormund is a true believer in Jon, and agrees to join him. And what’s more, he recently caught a couple of fellas who might be able to help…

The Hound, Beric and Thoros! They were caught near Eastwatch and have been slowly freezing to death in a cell (Thoros is annoyed that he’s sober). Now, they’re joining Jon, Jorah and Gendry, creating the greatest, fur-coated Dirty Half Dozen in history, heading out into the very heart of Winter, hoping to snatch a Wight and bring it back to King’s Landing in a plan that’s just so crazy it just might work.

Oh what, you thought I forgot about Jon’s touching moment with Drogon beacuse clearly Drogon knows Jon is a Targaryen and is like a brother of dragons? Nope, that’s coming in another post.