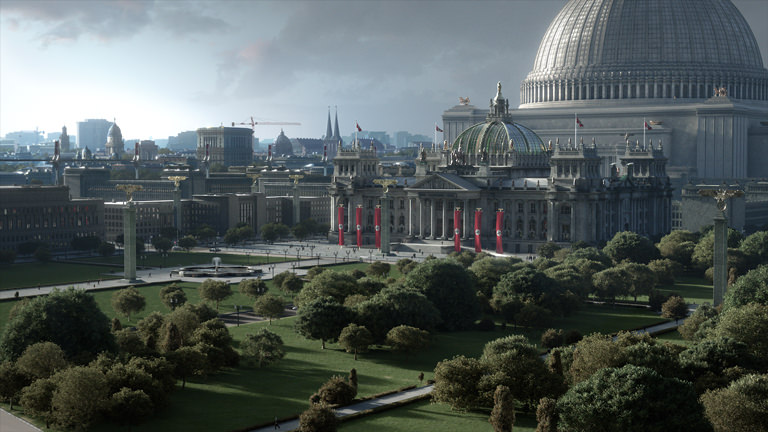 Amazon’s The Man in the High Castle portrays a comprehensive and convincing alternate reality in which the Nazi Reich was victorious in World War II. It’s a disturbing world that fortunately never was, but the show is a hearty visual feast that dives unrestrained into the terror. Visual effects supervisor Lawson Deming guided his team to build entire cityscapes outside Hitler’s window, reimagines where technology would lead in an America controlled by the Nazi Reich, and even explodes an atomic bomb. His work is so convincing, you often won’t even realize you’re looking at a digital detail. Deming’s masterwork culminated in a digital creation of the terrible Volkshalle dome that was once conceived by Hitler himself.

We spoke with Deming about the 400 effects that appear in season 2, researching the Volkshalle dome, details you might have missed, and more.

This show is so visually rich. Can you give me a brief rundown of your scope of work on the show?

We did about 400 visual effect shots over the course of season 2. That ranges from invisible effects, fixes, paint outs, all the way to big show piece things like the Volkshalle. Both the inside and outside of it were CG effects. We have a scene in episode 2 outside the Nazi embassy in San Francisco that had a big digital extension of the building. We see the airport in episode 3, which is a combination of photography and CG effects. The Kenpeitai explosion in episode 9 had a number of visual effects in it. They run the gambit from simple things to big and complex things.

Why is it critical on this show to be able to build sets and backdrops in CG?

We have a really great art department on the show. They built all of the practical, physical sets. It’s mind blowing and you immediately feel like you’re in a place. Their only real limitation is one of scale. They can only build things so big. They can’t build entire buildings. One of the big visuals is the larger than life brutalism structures that the Nazis have made. Sometimes that just has to be a visual effect. There’s no other way around it. This is a period show so even though there are 60s buildings and before that do exist and can be photographed, oftentimes they’re completely enshrouded in modern glass buildings that have been built around them. The art department has limited time and budget and scale. Whenever we have to go beyond that a bit, that’s when visual effects become important. 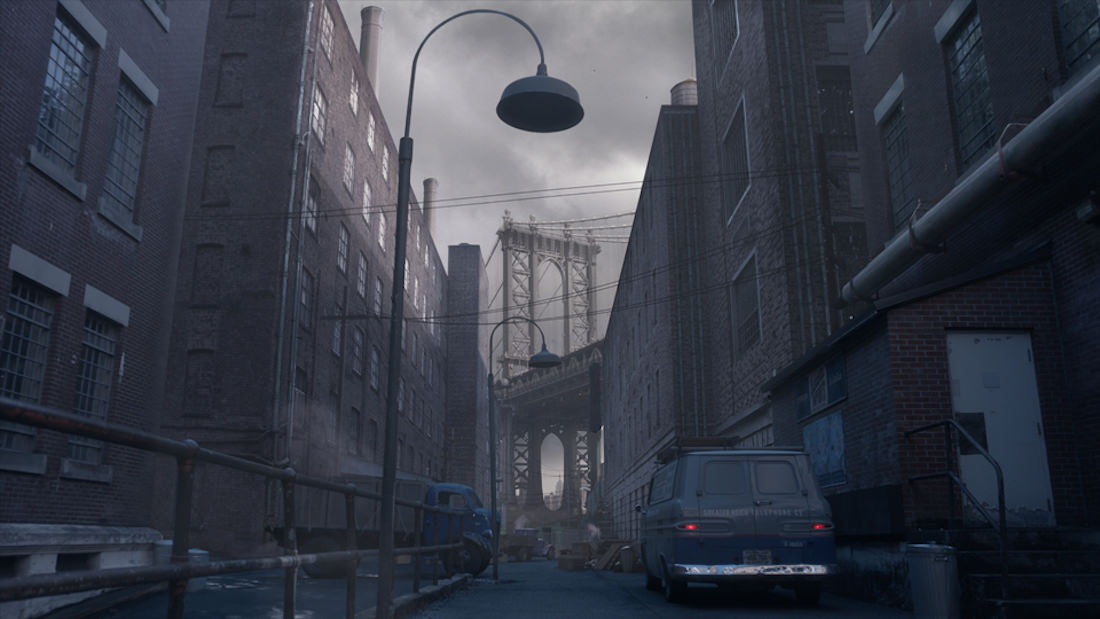 The big VFX piece this season was the Nazi Volkshalle dome. What is it?

That was actually proposed for construction by Hitler’s architect, Albert Speer. He designed a lot of the things the Nazis used. Some of them were built. Some of them were blueprinted and never finished because they lost the war. If they had won, there was this plan for the world government to be based in Berlin. It was a city within a city called Germania. In the center of that was this giant dome, the Volkshalle, the People’s Hall. It would have been about 1,000 feet tall, by far the largest freestanding dome structure in the world.

What was your method for making it a reality?

There are little scale models, blueprints, and illustrations of it that still exist in Berlin. We looked at this and realized we basically can make this look like it would have been intended to look inside and out. We knew the dome on the inside was meant to resemble the dome of the Pantheon. The Pantheon is 1/8 the height of what the Volkshalle would have been. The other thing about this brutalism style of architecture was that everything was designed to make the individual feel small. Everything is bigger than it should have been. You say that’s a door, I know what a door looks like. Then someone says, well that door is 30 feet tall. All of a sudden your sense of scale inside this place is topsy-turvy. [Production Designer] Drew Boughton drew up the initial design and we talked about them and made modifications. We eventually made the whole space in CGI and then filled it with 150,000 people. 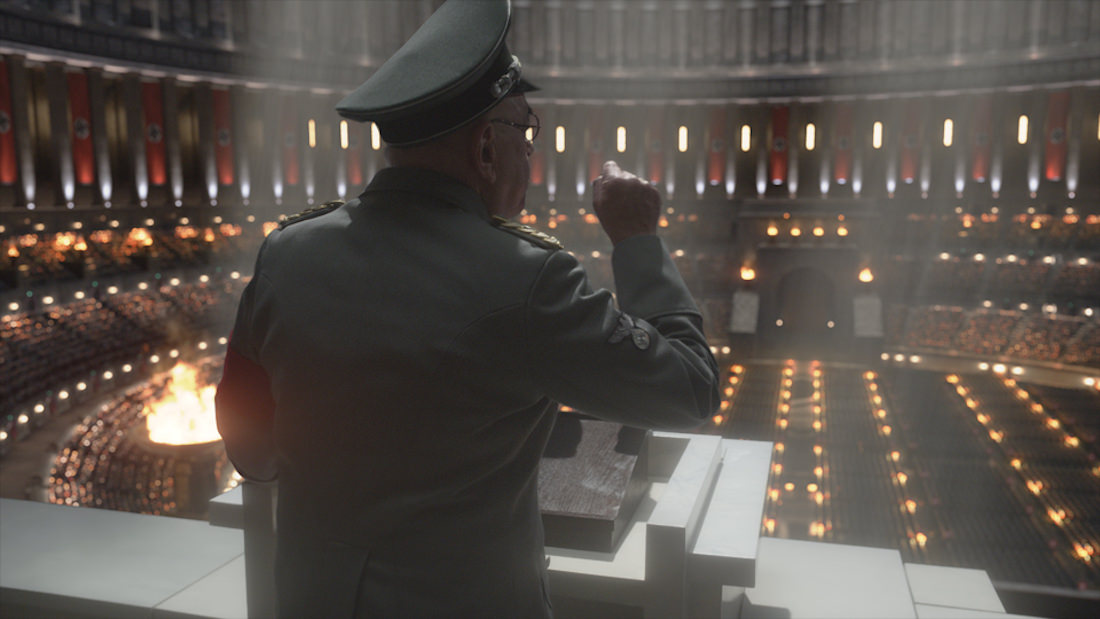 How did all of your work culminate in the Emmy nominated season finale?

When we made the Volkshalle in season 1 it had only been seen on the horizon. We knew we wanted to get into it for season 2 and explore the space. We get a glimpse of it in episode 1 when John Smith is summoned to visit Hitler. We knew that we wanted to come back to it for some sort of rally at the end of the season just because it was such a cool place and we didn’t want to just use it once and be done with it. The moment that the rally happens is a very dramatic moment where Himmler congratulates Smith in front of all these people. From a VFX standpoint, it was a huge go. We had taken a space we had worked on for the first episode and continued to develop it, put all these digital people and got them sieg heiling in unison. Very reminiscent visually of the documentary Triumph of the Will that shows some big Nazi rallies. I think it’s just a really powerful scene.

Are the other elements you design historically accurate or reimagined for the alternate reality of the show?

Back in the pilot, there was a Nazi rocket plane. I wasn’t involved in that for the pilot, though we reintroduced these jet rocket planes in season 2. For that scene we modified and built them up a bit because we were seeing them from new angles. Those planes were somewhat similar to the Concorde Jet, but it had to be modified. Understandably, a lot of people don’t want to be associated with Nazi Germany even in a fantasy science fiction world. We are also designing other Japanese and German airplanes and warships and things like that that you see. We have put a lot of thought into it. Particularly after WWII, Japan and Germany were forbidden from building military vehicles and a lot of the military advancements in the 50s and 60s were done in the United States. What take German and Japanese designs and hypothesize if they had been able to continue what would they look like in the 60s? There’s no true answer. It’s becoming a faux historian and what we think everything would have looked like. 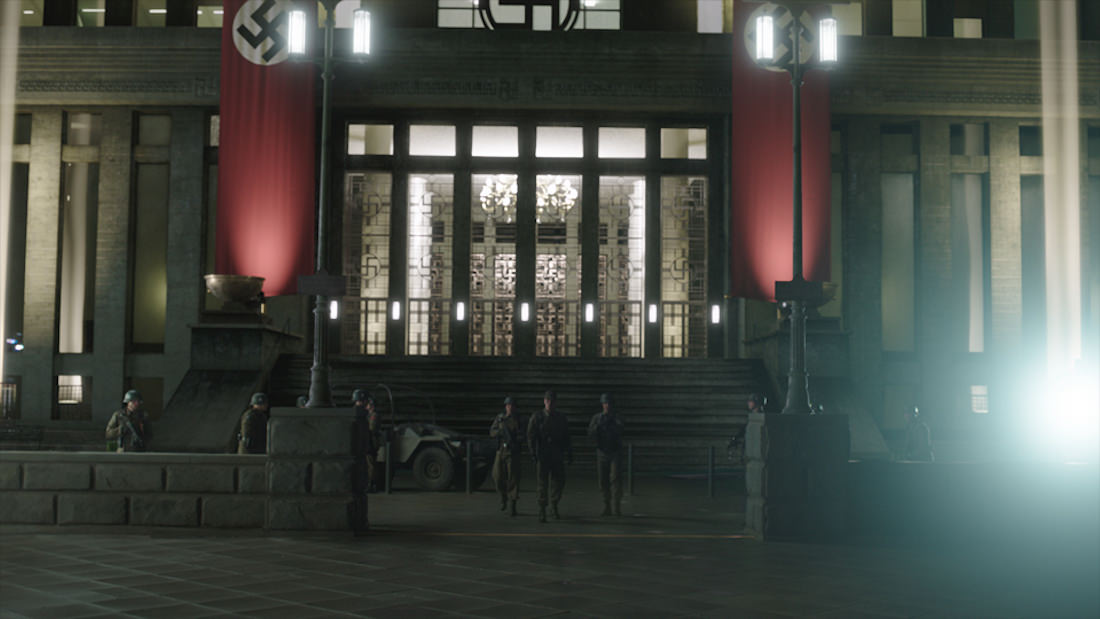 What’s one of your favorite effects that we could have missed?

We did a complete replacement of a sign on a lamppost outside of the Nazi embassy. They had made this sign that said, “You are now entering the Nazi Reich” in German, Japanese, and English. They realized when we were shooting that you couldn’t read it. That’s an example of something that was attempted to be done practically and after the fact we replaced it. We also do paint fixes removing modern things, street markings, cross walks that didn’t exist in the same way in the 60s. We’re sometimes adding more period correct stuff to replace them. There’s a pretty amazing view outside of Hitler’s office window in the Volkshalle. It’s like a Nazi Disneyland out there with a bunch of big columns and a monorail. Also Hitler’s office set is a set so it has no ceiling. Most sets don’t have ceilings because that’s where the lighting comes from. So anytime we’re wide enough in there that we would see a ceiling, we made a very ornate wooden ceiling with digital effects. You’re so busy looking out the window that you didn’t realize the entire ceiling was completely replaced.

How do you handle the stunts and explosions?

I get the hard job of going on YouTube and looking up explosion footage.  We did research on nuclear explosions. We figured out what size blast and how far away a kiloton bomb would be visible. The U.S. did a lot of nuclear tests in the 50s. There’s a surprising amount of footage of actual tests for references and data and what happened and how big stuff was and really good quality film footage. Our special effects coordinator created a lot of explosions practically. The boat explosion was about half practical that he made with gasoline or something like that. Then we added more fire and smoke. I would say about half the time when you see stuff blowing up on screen it’s real. It’s usually better to do it in a variety of different ways. You’re trying to do whatever works best for a particular scene and make sure the audience doesn’t catch on.