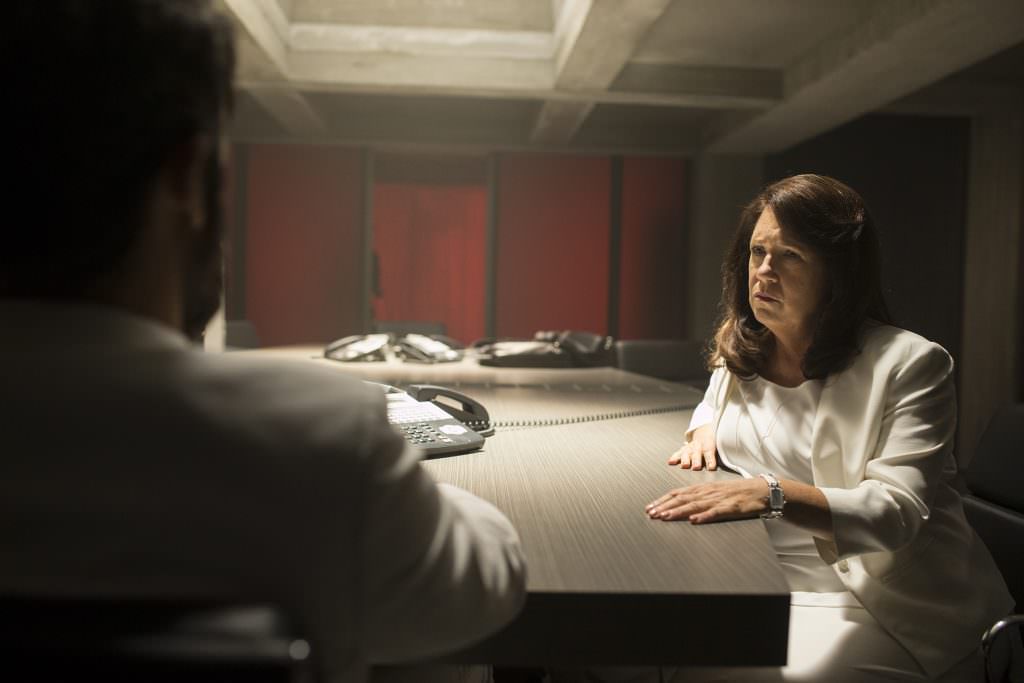 Frightening to begin with, The Handmaid’s Tale gets even more creepy fifteen minutes into the first episode with the introduction of “Aunt Lydia.” Played with fierce authority by Ann Dowd, Lydia hectors a group of young women forced to bear children for the men who rule near-future “Gilead.” Striding around the classroom in short hair, drab gown and combat boots, Lydia stops at the desk of a surly student and abruptly jabs the handmaid with a cattle prod. Today’s lesson: obedience, above all.

Dowd modeled her Emmy-nominated Aunt Lydia performance partially on the nuns who educated her as a child growing up in Holyoke, Massachusetts. “At the time I thought they were unfair and mean, but now I think nuns get a bad rap,” Dowd says. “The Catholic sisters taught me a terrific work ethic: do each job to its completion with the best of your ability. And that’s something Aunt Lydia takes quite seriously. She has a duty to teach the Handmaids so the girls are very clear about what is expected from them, or else they will fail in this life.”

Dowd’s supporting star turn in Handmaid contributes to a late-breaking hot streak that includes a second Emmy nomination for her portrayal of cult leader-turned ghost-turned-Secretary of Defense Patti Levin in The Leftovers. In both roles, Dowd, 61, brings a hard-earned gravitas drawing on nearly four decades of acting experience. In her early twenties, she abandoned a straight-and-narrow plan to become a doctor and instead enrolled at Chicago’s DePaul University Theatre School. After honing her stage chops in the city’s storefront theaters, Dowd moved to New York, raised three kids with actor husband (Lawrence Arancio), landed dozens of supporting TV roles and finally broke through as a conflicted fast food manager in the disturbing 2012 indie feature Compliance.

Shortly later, The Leftovers co-creators Damon Lindelof and Tom Perotta cast Dowd in their semi-fantastical HBO drama about small town community struggling to accept the mysterious “departure” of friends and family. Dowd admits she needed a couple of read-throughs to wrap her head around the role of Patti, a cryptic religious leader firmly committed to cigarettes and a vow of silence. “When I first read ‘The Leftovers’ material, I didn’t get it,” Dowd says. “What’s the Departure? Then I took another read and realized this character Patti is interesting. She doesn’t talk. I was slightly panicked because as actors, we rely on words to get what we want. But the brilliant thing is that when you don’t speak, you really have to know what the character wants with every fiber of your being. It gives you tremendous power, because the moment you quit talking, you’re suddenly in control of the room and everyone else is trying to figure out ‘What does she want? What’s she doing here?’ For me, that was a sort of shocking experience.” 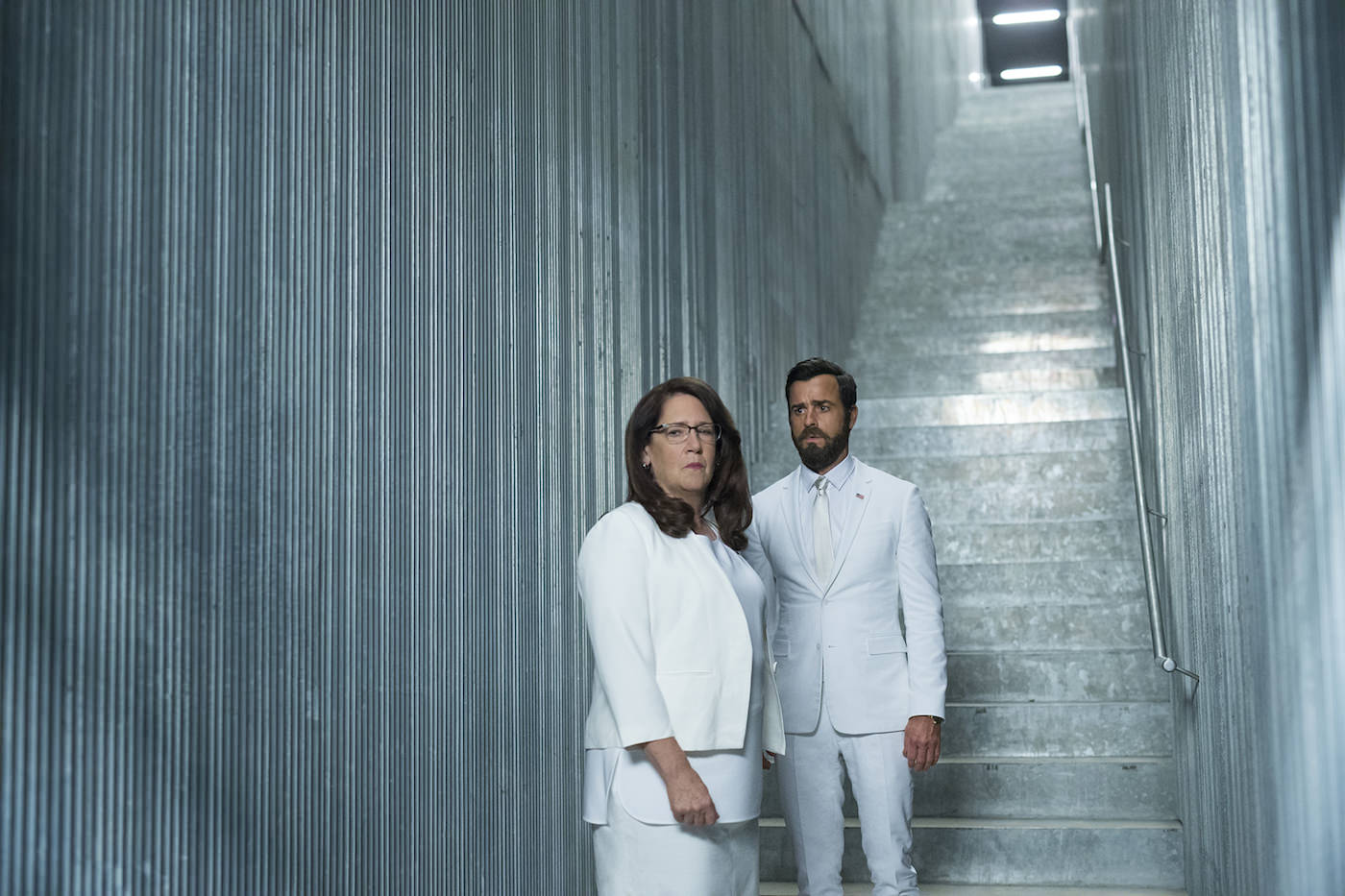 Ann Dowd and Justin Theroux in The Leftovers. Courtesy HBO.

Dead by the end of The Leftovers‘ first season, Patti returned as a cranky ghost pestering the tormented police chief Kevin (Justin Theroux) in Season 2. “Patti doesn’t know why she’s there,” Dowd says. “She took care of business, killed herself and now she’s sitting next to Kevin in a truck. He aggravates Patti to no end with all his weeping and moaning. She’s going ‘I don’t know what I’m doing here, you’re annoying me, now snap out of it.”

This year in The Leftovers, Patti showed up as Secretary of Defense in a parallel universe where Kevin has somehow become President of the United States. She matter of factly urges him to kill his civilian doppelganger. Dowd explains, “Patti’s emotional burdens are behind her now and she’s there for one reason only, which is to help her friend Kevin get rid of the places he goes to hide so he can get back to life. ‘The Leftovers’ was a profound experience for me because it’s about sitting with grief and loss, which is universal. And I loved that for all three seasons, Patti’s essentially the same impatient person: She doesn’t tolerate fools.”

Fresh from a stint in North Carolina playing an FBI Agent in Michelle Dockery’s Good Behavior, Dowd returns to Toronto in September to begin work on a new season of The Handmaid’s Tale. “For those of us working on The Handmaid’s Tale, it gives us a voice, a kind of activism,” Dowd says. “Our goal is to remind people to stay awake, be alert and speak up if something is said or done that’s heading in the wrong direction.

While Aunt Lydia’s belief system is “as different as it could be” from her own, Dowd enjoys playing the heavy in a politically pertinent TV series. She says, “Even though Aunt Lydia is on the weird side of the equation, it’s a pleasure to step into her life. We have enough lovely Handmaids in the show. We need the voice of the frightening aunt as well.”