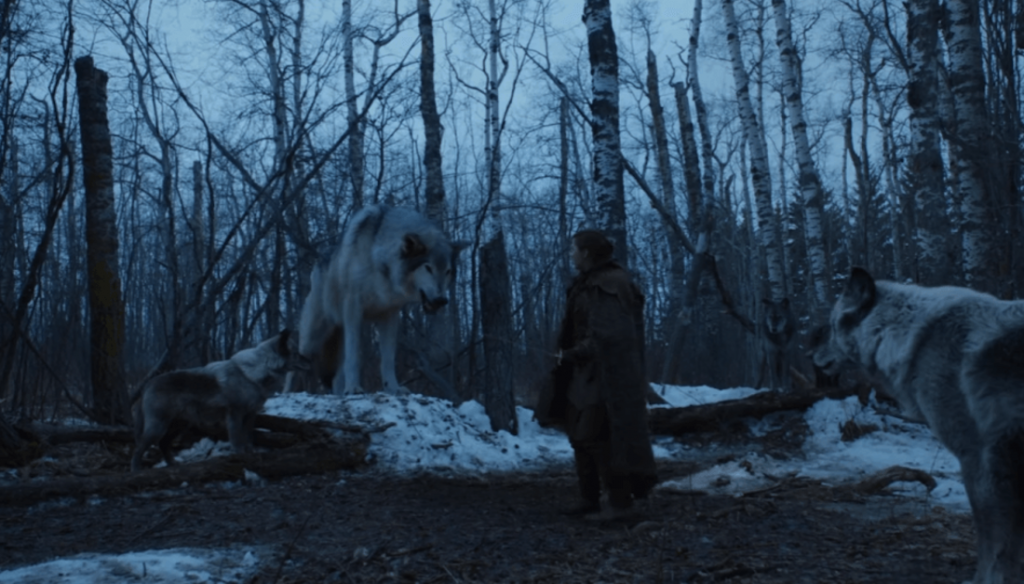 The Starks have long been poster children for misfortune and loss, outdone perhaps only by their direwolves. Of the original six that were found by Robb Stark in the first season of Game of Thrones, four of the direwolves have been killed off. Often used as symbols for various members of the Stark family, the mythical wolves have be subject to much abuse, ending up dead more often than not.

Last season alone saw the deaths of two of the direwolves, with Rickon’s loyal companion Shaggydog returning to the series after several seasons as nothing but a severed head, and Bran’s wolf Summer dying while facing off with the White Walkers. And up until this past weekend, only Ghost, Jon’s wolf, was actually known to be alive. On Sunday, viewers finally found out what had become of Nymeria, who hadn’t been seen since Arya sent her into the woods in the first season to save her from the Lannisters.

While this reunion has been many seasons in the making, it was still bittersweet, a moment showcasing their collective evolution since their last meeting. Nymeria is now a wild creature leading a ferocious pack of wolves, forced to adapt to nature and circumstance. Arya has freshly diverged from her steady and solitary march to exact revenge to head to Winterfell, which she just found out was recaptured from the Bolton’s by her brother, Jon Snow.

In many ways it makes sense that Nymeria does not accompany Arya back to Winterfell. After all, Arya is in the midst of rejecting the fierce lone wolf life she appeared to be heading towards as she crossed names off of her list. Instead she is on her way back to what remains of her family and old life at Winterfell. Nymeria too is now a wild creature, not meant for the domesticated life implied by joining Arya on her return to Winterfell. This is something that Arya potentially acknowledges when she says “That’s not you”. They could also simply not need each other right now.

There is the potential to see Nymeria at a later point in the series, though under what circumstances it is hard to say. Fans everywhere, however, can rest assured that Nymeria – after a multi-season wait – is still around, and that she lives to fight another day.