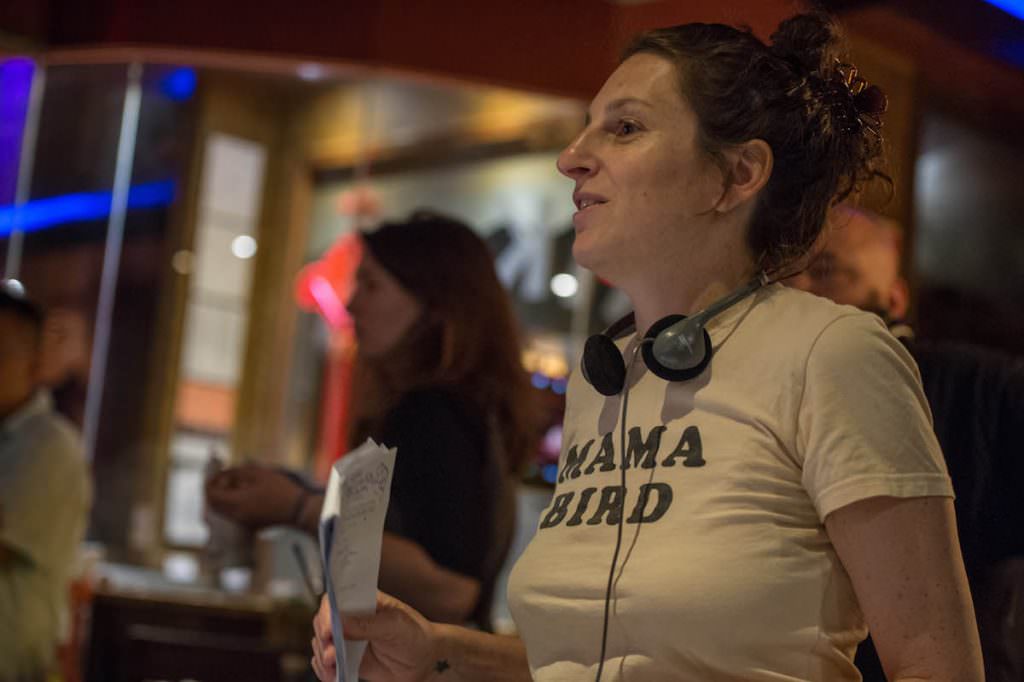 The year is 1995. Bill Clinton is president, Natalie Merchant sings about the weather, Mad About You is must-see TV, Lorena Bobbitt jokes are all the rage, floppy discs are a clunky necessity – and cellphones are nowhere to be seen.

Director-writer Gillian Robespierre and producer Elisabeth Holm’s first film together, the 2014 art-house circuit darling Obvious Child, was a moving contemporary comedy that focused on a stand-up comic (Jenny Slate) who deals with an unexpected pregnancy after a one-night stand. But their follow-up, Landline – which opens on Friday — not only embraces a wider scope as it deals with a Brooklyn family’s dysfunctionality, but their co-written screenplay takes place in the era when they both came of age.

The one constant in both efforts is the presence of Slate, a Saturday Night Live alum and in-demand voice actress whose profile was raised considerably after she got to show dramatic flair in Obvious Child. In Landline, she is more part of an ensemble with Edie Falco as her take-charge mother, John Tuturro as her beta-male father and newcomer Abby Quinn as her rebellious teenage sister.

“Gillian and I met as strangers at one of my stand-up shows in 2009,” Slate recalls. “We were both women living in Brooklyn, not Hollywood types. Both she and Liz are real, honest people. We have a healthy relationship, not enemies feeding off each other. We have a voluntary sisterhood.  She and Liz are both highly creative. But Liz has that producer thing — very organized, she doesn’t flinch.  Gillian is more a cool mother, with a bit of a soft side but is totally unapologetic when she directs.”

If Sundance reaction is to be trusted, Landline just might the perfect thoughtful alternative to anyone suffering from summer blockbuster fatigue at this point. Robespierre and Holm discuss why below. 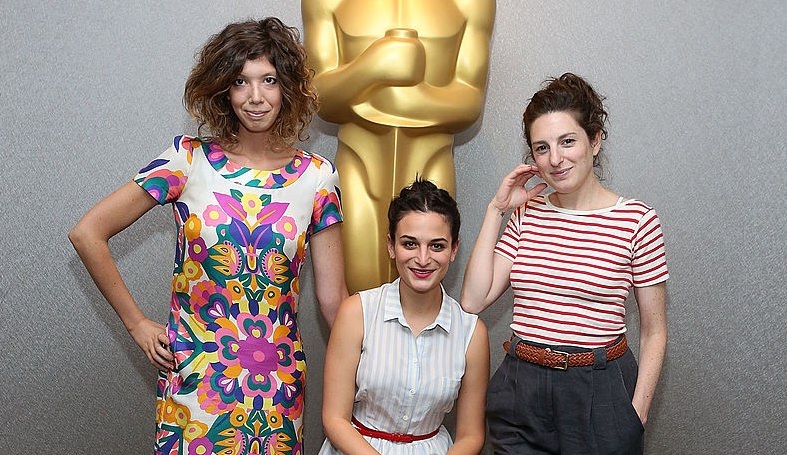 Why did you want to go back to 1995 to look at these three women – a high-school senior up for any drug or sexual situation, her 30-something insecure sister having second thoughts about getting married and their exasperated mother who belittles their father, who might be cheating on her?

Gillian:  For us, it started as a way to get away from devices – our phones, social media  — as a story. We wanted to see what a family would look like when they are just flailing and have to do it looking at each other. We both came of age in the ‘90s and we were forced to have dinner with our families without having computers in front of us. And the conversations weren’t always stimulating but they happened. And sometimes the awkward silences happened a lot, too.

I don’t remember a lot of cellphone action in Obvious Child, either.

Gillian: Some films do a good job with devices and how to deal with text messages. And weave it into a story in a great genuine way especially in action movies. But it is hard. The movies that we grew up loving and watching and the movies we want to create are a little more intimate than the current conditions that we live in. I’m glued to my phone. I’m not that happy about it. I’m totally addicted. I have a toddler and sometimes  I’m a helicopter mom or completely negligent because I’m on my phone.  But I think we wanted to create a world where people had to talk to each other and be forced to do so.

Elisabeth: Our movie is about communication and the lack there of.  About a family is full of secrets and lies. To not say things or to protect one another. I think for us, I think that is very human. And the stories we like to tell are about humans doing human things.

You seem to both be in the Jenny Slate business now. I first fell in love with her voice as Marcel the Shell in those online videos. I also loved her vocal performance as the main female dog Gidget in The Secret Life of Pets. But in Obvious Child, she won me over with her acting.

Gillian: We love Jenny. She is our muse for many reasons. And not just that she has that wonderful party voice and amazing comedic talent. She also is a wonderful actor. She has a way of being sad in one moment then making a joke about her sadness and riding that roller coaster of emotions so well in a scene. As an actor, it is not easy to do. But she knows how to juggle those emotions.

There is more female-driven comedies trafficking in what I would call TMI humor. Bridemaids, Girls and Amy Schumer’s work as well as Jenny with her “cottage cheese” panties in Obvious Child. You continue that here with some awkward sex scenes. It bothered me when Abby’s character so casually decided to snort heroin for the first time.

Gillian: She is dipping her toe into some serious stuff. But each family member is dipping their toe in, too. The only way they finally find a way of getting out of their mess is by finally communicating. Not a happy ending that occurs with one snap. It’s a long road of just figuring out how to talk to each other. We start showing that with the bathroom scene (when the two daughters and mom finally have a heart to heart on the floor). When the movie credits roll, we want to leave the audience feeling hopeful.

What scene get the biggest reaction?  I am guessing when Jay Duplass as Jenny’s fiance pees on a rash on her leg in the shower.

Gillian: We were just at BAMcinemaFest (in Brooklyn) and that got huge laugh, which was great. This is  a couple who have definitely become a little more like brother and sister instead of a sexual couple. They are no longer doing sexy time in the shower. It’s “Pass the shampoo. I’m cold. Let me get under the water. You just dropped toothpaste on my foot. Pee on my rash.”

Are these characters based on you or people you knew or know?

Gillian: A mish mash of those things. Liz and I both grew up with divorce. Our parents both got divorced when we were teenagers. Like in this movie. And what happened in both of our families is that we became closer to our siblings and our parents through the process.  It was exciting for our family to be able for the first time see each other as real people and not just in these little roles that we sort of carved and dug into and really couldn’t get out of. When we were sitting around trying to figure out what kind of family we wanted to create, it definitely started with our story and grew into something different with real characters who weren’t us any longer.

It is fun to see what signposts you employ to represent 1995. But you didn’t go overboard with references. It could have been very kitschy. I remember all the big hair being in style.

Gillian: Yeah, we didn’t straighten our hair. Yet. We didn’t really know how to manage our eyebrows. We weren’t getting threaded and plucked and tweezed in the ‘90s. Everything felt a little more natural. It’s a low-budget independent film and  New York has changed. There is Duane Reade, Starbucks, City Bites on every corner. We wanted to create the ‘90s through music and production design and costumes and hair. My favorite scene is the rave. Do kids rave anymore?

The best thing is the Hillary Clinton TV clip, when she gave her women’s rights speech in Beijing that year. It makes you think what could have been.

Elisabeth: We choose that scene for many reasons. The pink suit punchline is one of them. But also this woman, this complex, powerful woman who juggled so much and obviously there are some parallels in the film to her husband, and the secrets she keeps and the life that she leads. And just being a powerhouse. Which we see Edie Falco’s Pat as. My mother worked for the Environmental Protection Agency for 25 years and juggled that with being a super mom. Hillary is that working mother that meant so much to us.

Gillian After the election, the scene played differently for us and made it feel as if women aren’t allowed to lie. That we are punished for lying. And everyone in this family in their way tells a different lie. We wanted to show women having complex moments. And, occasionally, lying and not being punished by themselves or the outside world. Unfortunately, that didn’t happen in the real world but in the movie world we created we were able to show women struggling without punishment.

Elisabeth: There are consequences, but it’s different.

Gillian: I think we are allowed to make mistakes and grow from them.