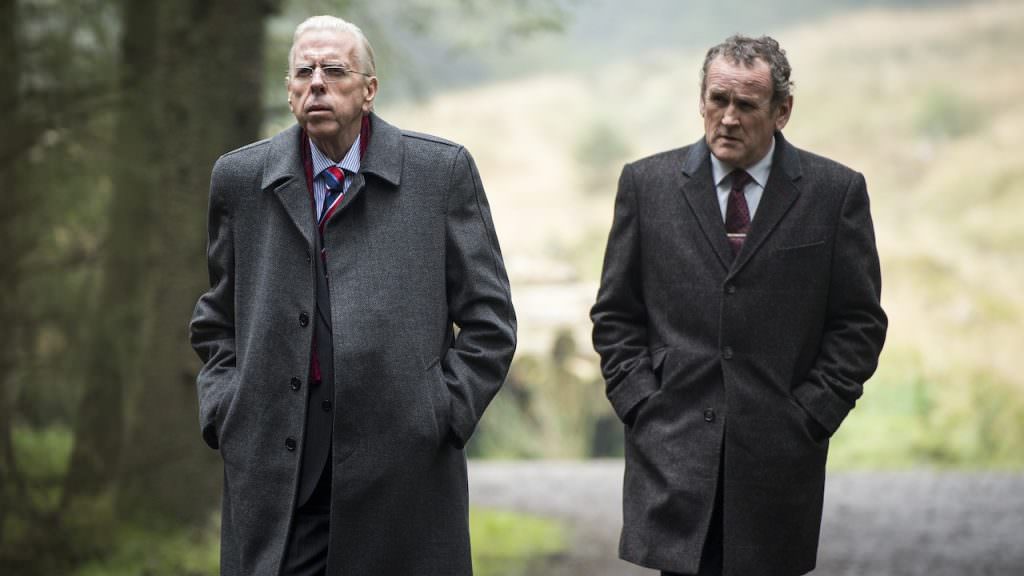 Hamm visited Washington in June to screen The Journey at the United States Institute for Peace. The next day, he talked to The Credits about the movie, which opens wider on July 7. The interview, which has been edited for length and clarity, began with the director's interest in making a movie about the trip that drove the peace process in his home territory.

“I wanted to tell a story about Northern Ireland which had good news rather than bad news. I particularly wanted to tell this story of these two guys. Because it was a unique political friendship. And it hadn't seemed to me to be celebrated in the right way. This was a friendship that not only worked, but it achieved real results. People stopped killing each other because of it.”

I think it's changed a lot. It's now a much more cosmopolitan, much more internationalist place. And it's got a whole new generation growing up that knows nothing about the conflict. Whose idea of it is historical, just like anybody else's.

It's hard to achieve peace. It's harder still to keep it. And both of the men who led that are not there anymore. They're both dead.

One of them, Martin McGuinness, was alive when you started this project. Did that influence how you worked on it?

It didn't at all. But I did go and see him. I also met the Paisley camp. What was interesting about talking to McGuinness was learning how important that relationship was to him. They both enjoyed each other's company. To the point where McGuinness was one of the last people to visit Paisley in hospital before he died. And also went to the funeral. Mrs. Paisley invited him to say a prayer at the coffin. This was a relationship that wasn't just public.

Yet in the movie, Paisley doesn't seem especially likable.

That's the thing. He's not. But don't forget that both men were pretty much disliked by anybody outside his own constituency. People in the UK hated McGuinness. They thought he was responsible for some of the worst bombings and atrocities on the English mainland.

But they didn't like either of them. Paisley did stand up in the middle of the European Parliament and call the Pope an Antichrist. There's video of it. And I didn't soften that. I was quite happy to present this truculent, ideologically pure individual who just didn't want to know McGuinness. So McGuinness at the beginning seems much more human and hopeful and honest. But by the end, they both open up.

Yeah. We worked on it together. We had the idea because we knew that for years politicians from different parties in Northern Ireland traveled together. Just to insure some sort of mutual safety. So some moron wouldn't blow them up.

It was never talked about. Because they couldn't get off the plane with their mortal enemies. Sometimes one party would stay on the plane until the other got off. They didn't want to be seen walking through the airport together.

When you see a piece that's just two people talking to each other for 90 minutes, you think it must have been conceived as a play.

Right. But it wasn't, actually. It was always conceived as a movie. I wanted to be able to get out of the car. It could be a play; it would be interesting as that. But I think people enjoy the structure of it, as a movie. They enjoy that there's conversation. It's not all snappy editing. You can sit with the movie and you can engage with the movie on an intellectual level, which I think is important to people.

How crucial were the actors to developing the characterizations?

They were completely crucial. That's their job, to do that. I can only help. They knew that was the gig. That there wasn't anything else for people watching the movie. They'd just be watching them.

Tim is a five-foot-eight working-class South Londoner who was playing a six-foot-five Northern Irish iconic firebrand who was rather strange looking. We gave Tim a false chin and made some teeth. Paisley had some pretty big gnashers. And he just dyed his hair white. Watching that actor transform is part of the joy of watching the movie. You're totally into how he's doing it.

Colm didn't have to transform himself physically. He looks a little bit like Mcguinness. He could channel Mcguinness in a different way, with the rhythms of his language. But they both had a sense of reality together. They could dance with each other as actors in a way that was just very sophisticated.

The movie must play very differently in Britain and Ireland than elsewhere.

The most difficult audience is the UK audience. Because they're too close. And frankly I think they're bored with anything to do with Ireland. They've just had enough. The Irish audience for the film is extraordinary, very warm. When we opened in Belfast, both sides came — the heads of Sinn Fein, the heads of the DUP, ex-hunger-strikers, ex-IRA members. They understand that it's a fictional account, but also that it's a celebration.

I've seen it play well at the Venice Film Festival, with Italian subtitles, and at Toronto and New York. And I saw it play here in Washington last night to a very sophisticated audience who understood every single reference. From a political standpoint, the Washington audience gets everything about it. They liked the politics of it, because it's their business.

While they're in the van, McGuinness and Paisley are being observed by British agents. So theirs is sort of a performance within a performance. Did you think of it that way?

Oh, yeah. That's what it is. The car is the stage, and we are the audience of the audience that's watching the video surveillance of the car. We're one step removed, because the secret service is also watching the movie. Watching them perform. As they did in real life in Northern Ireland.

One of your supporting character is Tony Blair, who doesn't come off all that well.

I'm guilty of using Blair as a kind of comic relief in the movie. But I don't really care what Blair's detractors think of him. History will write itself. I can tell you for a fact that he was incredibly involved in the peace process.

In addition to the two central characters, one of the cast is also deceased. John Hurt. Did you know he was that ill?

Yes. Although John wasn't very interested in talking about that. One of the reasons we took John is that he wanted to say those lines. He really wanted to be part of the movie. I felt that John has just contributed so much to cinema over the years that if he fancied doing that, then it was our job to give him the space to do it.

Was it hard working with him?

No. We made it very comfortable for him. The difficulty was getting insurance. So we said we'd shoot his scenes in a short period of time. He knew he was seriously ill. But he wanted to work right to the end. He had a drink every night at the bar, and he was a very happy man.