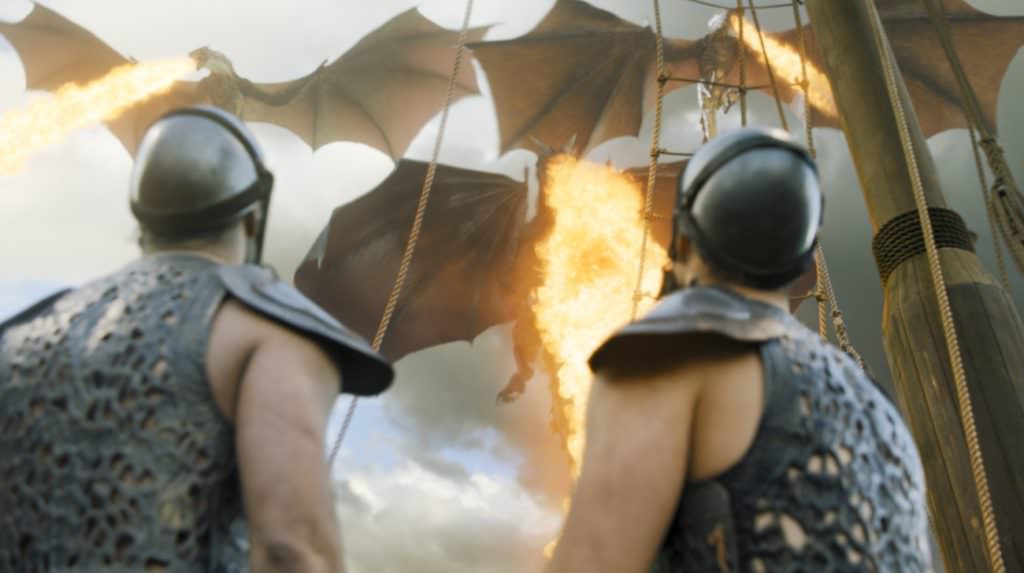 It has been a long and winding road – or rather flight – for Daenerys’ dragons since we saw them hatch in the finale of Game of Thrones’ first season. Powerful from the first, the dragons’ growth since then has only reinforced perceptions of Dany’s invincibility. Audiences have seen them wreak massive damage with only a single burst of flame. As Dany draws steadily nearer her goal of conquering Westeros, the likelihood that audiences will see her dragons in action on a battlefield increases. While we have seen the dragons incinerate fleets of ships, and dodge volleys of arrows, we have yet to see how they will handle a true battle. This begs the question of just how Dany’s enemies could bring the great beasts down.

Today i09 published a really fun piece, asking experts to look to facts and physics to explain just how an army might approach defeating a dragon (or three). Paleontologist Mark Witton points out that speed would be a factor; dragons would have move very quickly to stay aloft, a fact that increases the difficulty of hitting an already-moving target. While using a bombardment of weapons might be somewhat effective in grounding a dragon, there would be great risk to those firing those weapons on the ground with all those missiles raining back down. Anyways, hitting a dragon out of the air makes it only incrementally less dangerous.

Dr. Lauren Oliver suggests that the colder climate Dany will be facing in Westeros might just aid her enemies in a battle, possibly dampening her dragons’ ability to stay healthy, and produce fire. The prospect of the dragons facing the powers of the White Walkers also makes for a more uncertain battle outcome, especially as the White Walkers might have ice dragons of their own.

Whether facing down real-world army tactics or magic-wielding adversaries, Dany’s dragons in battle would no doubt make for some intense TV. Moreover, with Dany sailing towards Westeros, such a battle is a distinct possibility in the upcoming season of Game of Thrones.