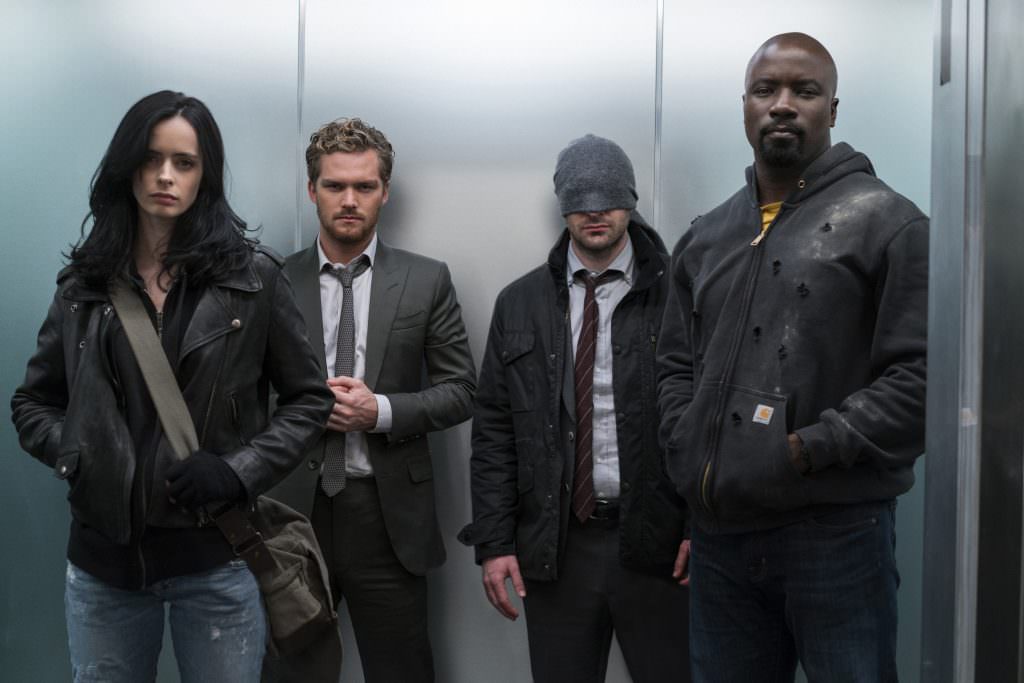 The Netflix residents of the Marvel Universe are all coming together for the first time on screen to team up as The Defenders. Makeup department head Sarit Klein had an intimate knowledge of the show’s characters going into production. She also worked as makeup head of previous installments Daredevil, Jessica Jones, Luke Cage, and Iron Fist. Klein and the rest of the crew filmed one series as they prepped for the next. Each show was a huge undertaking with several actors, stunt doubles, and sometimes more than one set shooting at once.

Klein spoke with us about her detailed archives that track continuity, how each superpower affects her designs, making up stunt doubles to match the main actor and more.

What is your workload like for a Marvel show?

When I get up in the morning, I need to respond to emails from Netflix and Marvel. I’m in the email chain of so many different departments. If there’s a production meeting, if it’s the costumes, if it’s the props, if it’s the special effects, if it’s a tone meeting to know what the tone of the episode is going to be. Even though I’m technically not there, I’m involved in all these things so everything may pertain to the makeup of a specific character or the episode. It’s a huge collaboration so I need to be in-the-know of everything pretty much. 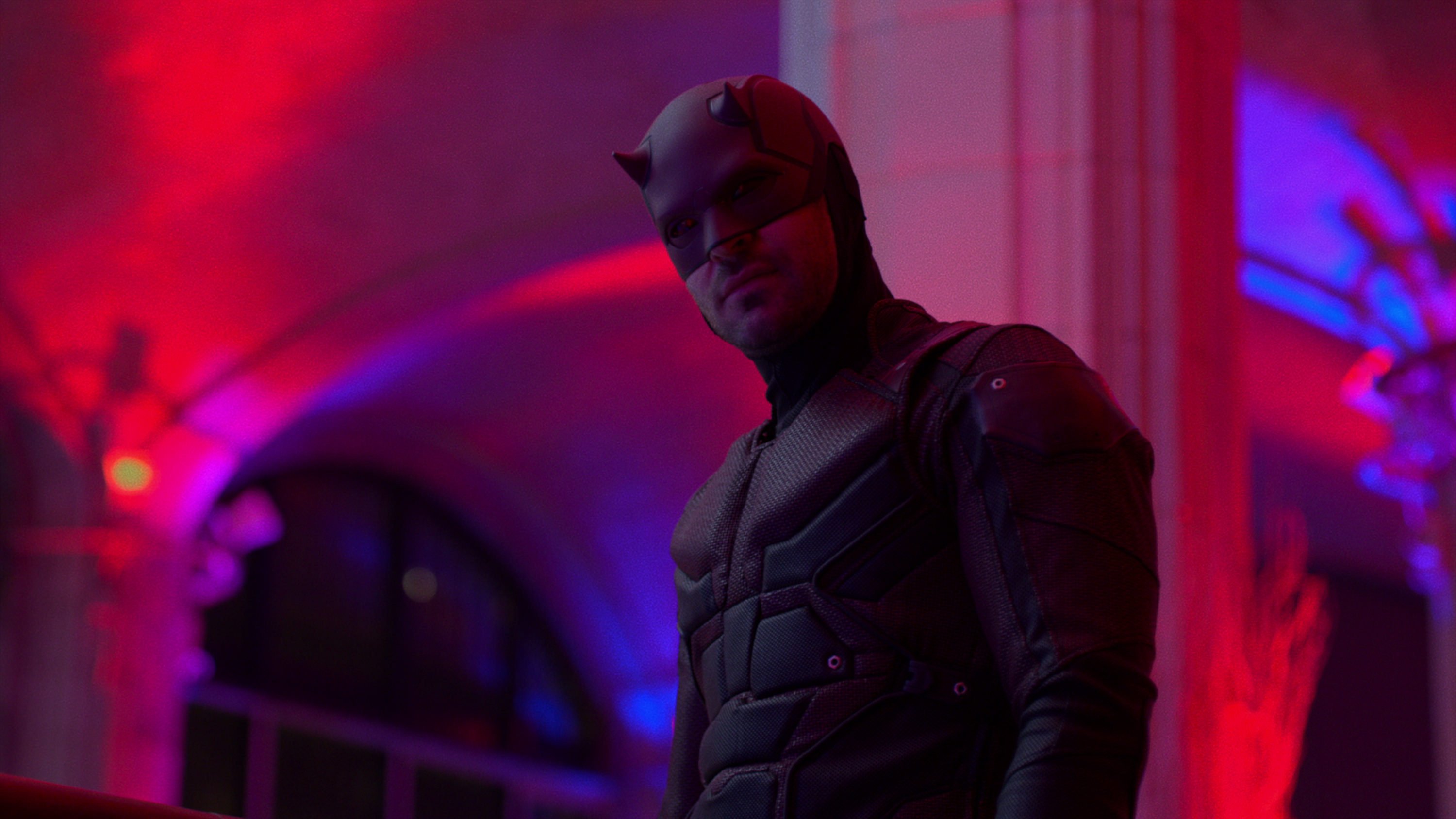 Charlie Cox as Daredevil in The Defenders. Courtesy of Netflix.

The Defenders is combining Daredevil, Jessica Jones, Luke Cage and Iron Fist. Is that a huge undertaking to bring them all together?

It could’ve been, but I came prepared because I knew from the beginning that I was going to do Defenders, just not knowing what characters were going to be in it. At the end of each individual show, I took notes and continuity pictures. For instance, Daredevil’s wound map that shows the healing of all his scars, the placement, where they’re going to be now, the bruises, and the cuts. I put them into a file. I did that for each show and I combined them into a continuity book that I took with me to The Defenders. I’m lucky to have that knowledge and that accessibility to all these pictures. Marvel kept in some vault all of these continuity pictures so I was able to grab what I could.

There are a lot of injuries like that on these shows with so much action. How do you maintain the continuity?

We do makeup tests and we have an approval process, which is the showrunner, Marvel, and Netflix. Once we do a makeup test, even a little bruise or a cut, it’s the color, the placement, the size, the shape. It was very specific and they liked to do this so that the actual shooting will be easy. We come on the day, it’s all approved, we go in and we do it. That way we can shoot our twelve hour days and continue moving at a fast pace. Each episode is nine days. And we prep the next episode while we shoot this episode. 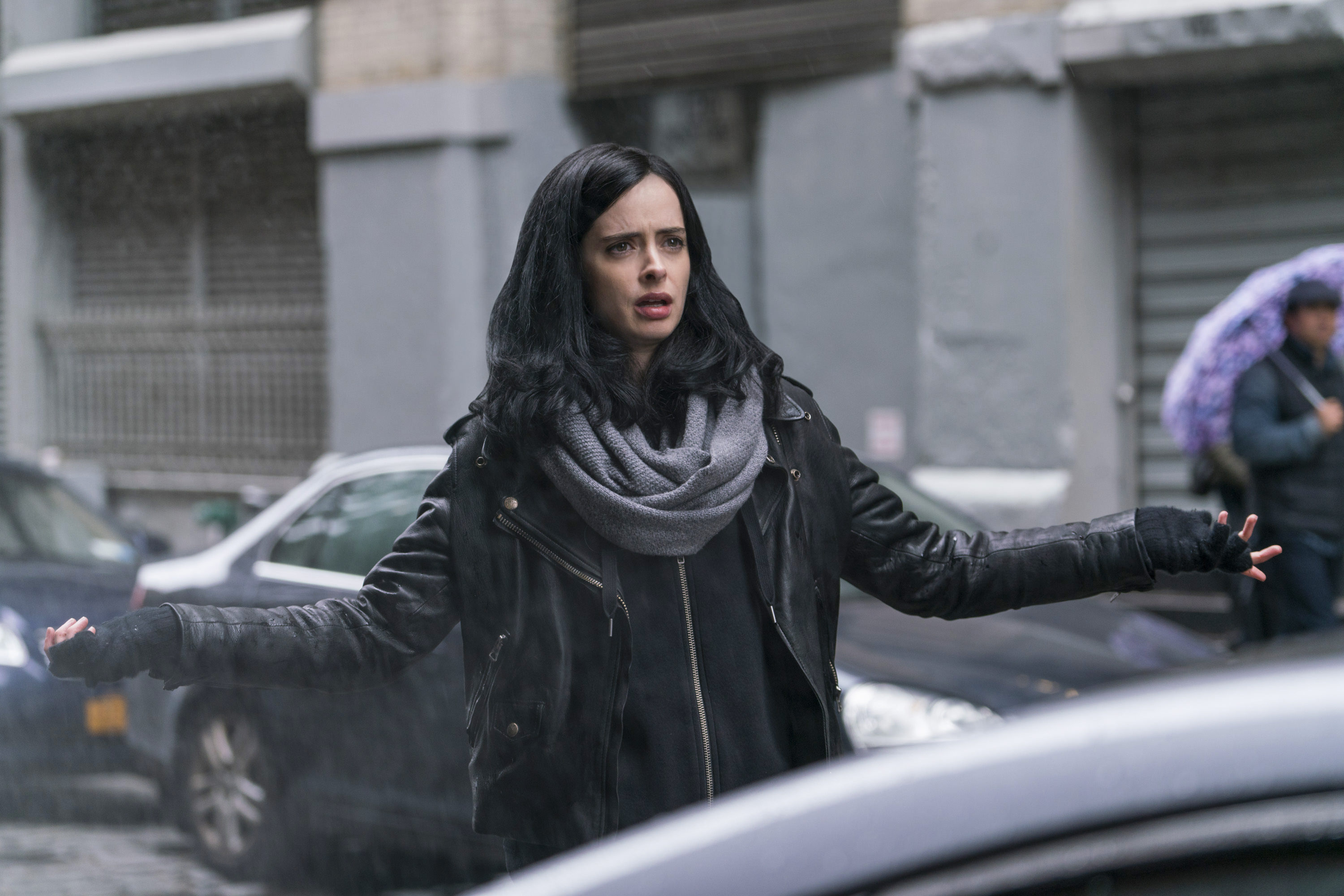 So your designs are done in advance and what are your days like on set?

There were days where we had the four Defenders, their stunt [doubles], the villains, the stunt villains, and then whoever else is on. My core [team] was five girls and most of them were with me on the other shows so they already knew the actors, they knew the system, they knew me. It was easier to delegate, prepare, and organize. We also have reshoots in tandem so two units going at the same time. One may be a day unit, one may be a night unit or both are same time but in different locations. So you have to be uber organized.

What is the process for making up stunt doubles? How similar do they need to look?

Finn Jones has a beard in Iron Fist. We have to put a beard on his stunt double and tan him to match Finn’s coloring. Mike Colter’s [Luke Cage] stunt guy, we need to put on facial hair and darken his skin to match Mike’s dark skin. Mainly the stunt people that they hire match that height and the build, so it doesn’t really matter their coloring or their facial hair. We are the ones who are in charge to make that match. We had a custom made beard for Iron Fist, for Finn Jones’ stunts. If you watch Iron Fist, you see that he starts as a homeless guy for the first two episodes, and then at episode three he changes his beard. So we had to change the beard for the stunt guy as well. The craziest thing was when we had to reshoot things from the first episode of Iron Fist while he already had a short beard. So we had to make another beard to apply on top of his current facial hair. I’ve never done that before, but we made do. 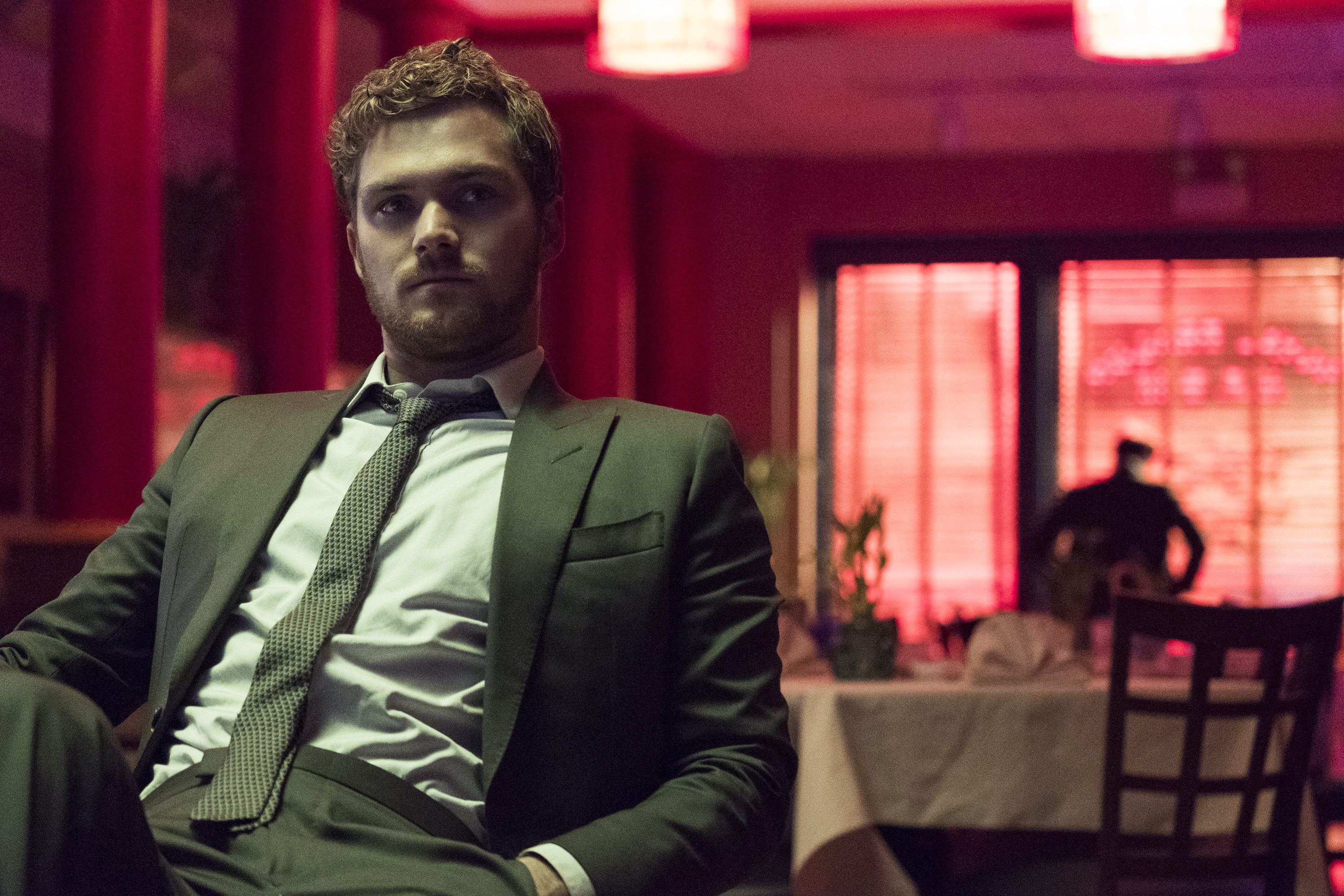 Which of the Defenders is the most difficult makeup to design or apply?

For Daredevil, half of the time he wears a mask. So for us, it’s just facial hair. Jessica Jones doesn’t care about what she looks like, so although it doesn’t look like she has a lot of makeup on, I designed something that I like to call invisible makeup. It’s makeup that she actually has a full face on, but it looks like she just got up in the morning, took a little bit of a drink, maybe put a little bit of eyeliner on and just goes on her way. She doesn’t actually put the eyeliner on in the show, but I do it just to make her look more edgy and darker. Mike Colter has impenetrable skin so he doesn’t bleed and all the others do. It’s interesting that each one has its own healing power and how to work with that. Iron Fist we had to work closely with VFX on the glowing fist. Every time we had to do a scene where we have his fist glowing, we had to do a take where we went and put dots on his hand in specific places, and do that again so that VFX will later go in post and make the glowing fist.

How do you deal both a character’s and an actor’s tattoos?

Three out of the four Defenders – I’ll let you guess who – have tattoos. We have to cover them up when they’re wearing shirtless, sleeveless, short sleeves. Of course, the stunt people as well. Covering up is easy. It’s not a big deal. Creating tattoos is more of a process that also needs approval, like everything with the Marvel characters. Because it’s Marvel Universe, it’s all connected. We have a principle that has a tattoo on his hand, and the stunt guy comes in the next day, so we’re not going to have time to make his tattoo. So I have to hand paint the tattoo on the stunt guy. Maybe it doesn’t have to be in as much detail depending on the placement of the body. 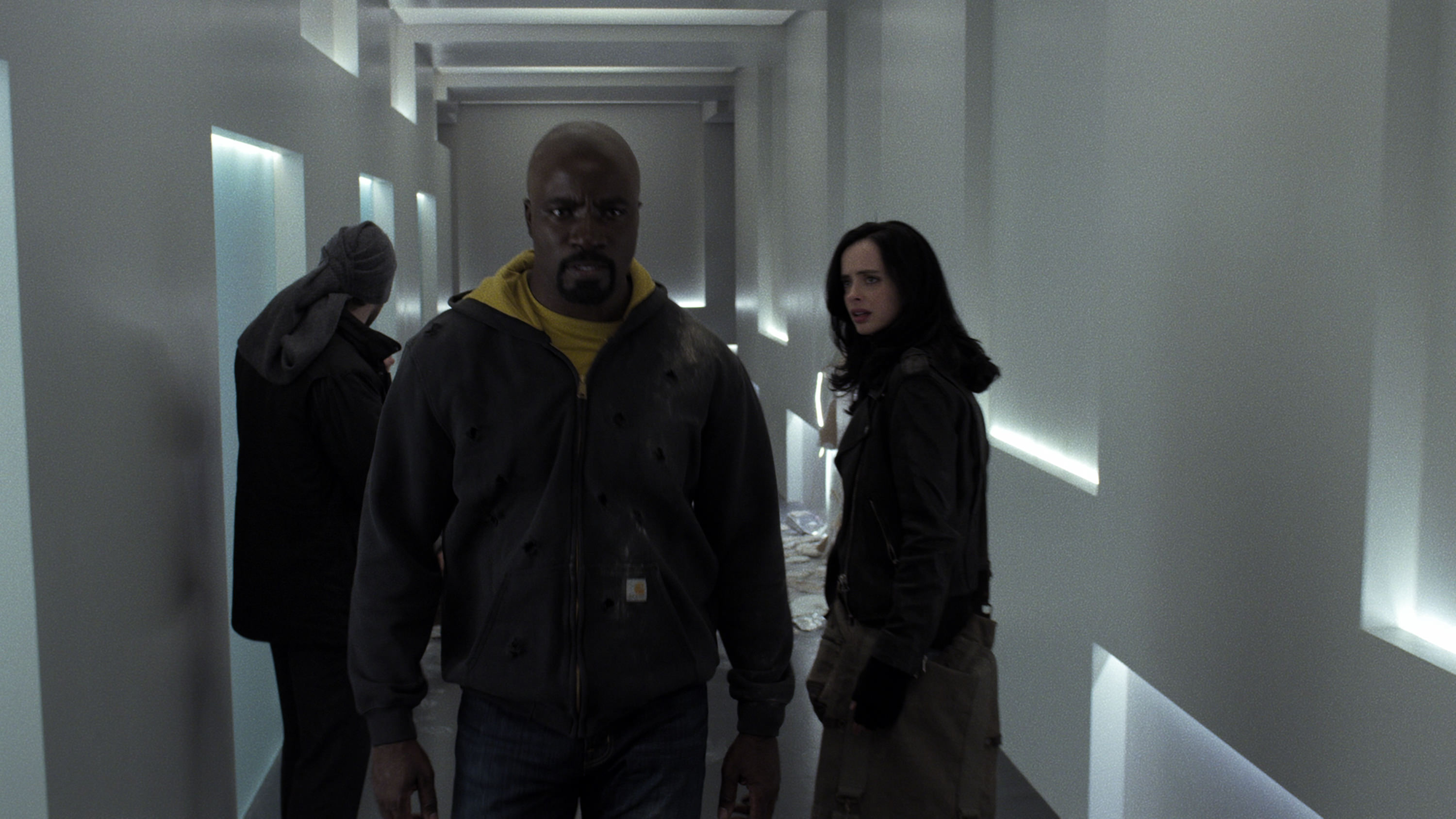 Charlie Cox as Daredevil, Mike Colter as Luke Cage and Krysten Ritter as Jessica Jones in The Defenders. Courtesy of Netflix.

Your Instagram @sarklmakeup is a great destination for a look behind the scenes.

I love talking about it because it’s been my life and I really put my heart and soul into it and I’m so happy that people love it. Now that the shows are out, except for Defenders, I can finally share some behind-the-scenes. That’s why I’m really enjoying putting stuff on Instagram with all kinds of little clues of what products I use. Someone just wrote yesterday on my Instagram that she plays Karen Page on cosplay and she wants to replicate the look and if I can let her know what products I use. I’m very happy to share anything.

The Defenders premieres on Netflix August 18