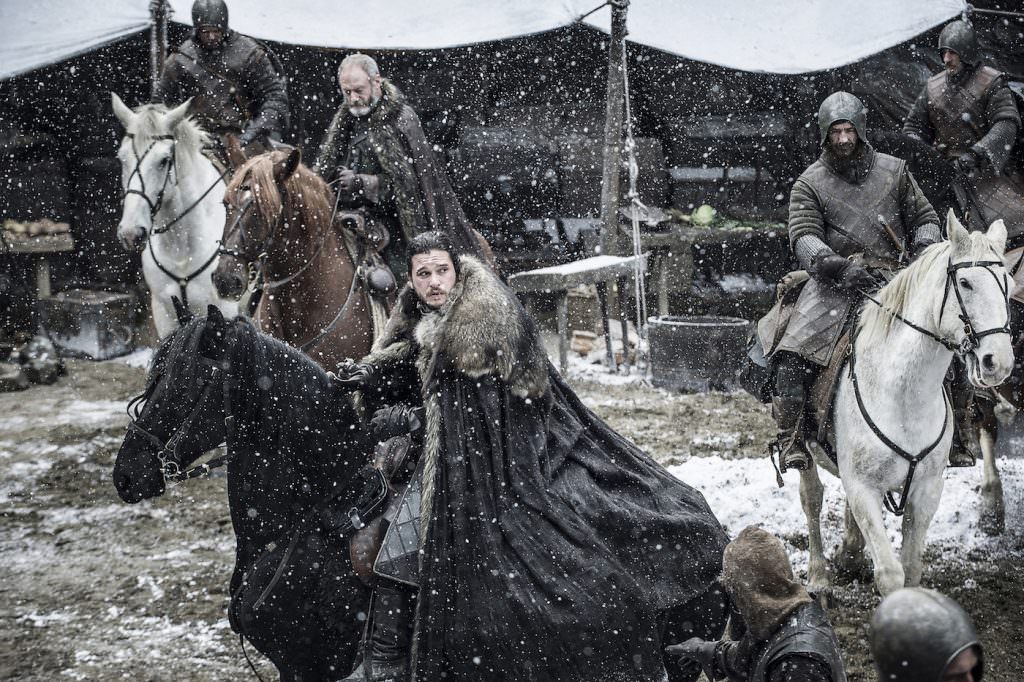 Well, Game of Thrones season seven has their first official villain (not counting Cersei, or the Night’s King, or the ice giant Wun Wun), and it’s Euron Greyjoy. Granted, in Westeros, “bad” is mostly relative, but when someone comes around who really likes killing, your Ramsay Boltons or your Mountains, you can credibly chalk them up in the villain category, and Euron Greyjoy is most certainly a villain. The second episode of the seventh episode, “Stormborn,” ended with Euron Greyjoy bringing fire and blood down upon his niece Yara’s fleet, and he managed to not only kill Yara, but also two of the three Sand Snakes and turned Theon back into Reek in the process. It was a thrilling, brutal coda to what had been a quieter episode than the premiere, and it reminded viewers that no character is ever truly safe, and no one who has redeemed themself is beyond falling apart again.

Euron’s attack also spoke to how fragile Dany’s place in Westeros is, even with three dragons and two of the smartest advisors in the Seven Kingdoms in Tyrion and Varys. The show opened with Dany in the Dragonstone map room, speaking with her allies and deciding the best way for her to take the Iron Throne. Once again Dany proved her flexibility and her strength, challenging her advisors, and the very hard to argue with Olenna, without resorting to Cersei-like threats or petulance. Dany’s concern with regular Westerosi is evident in her reluctance to simply burn King’s Landing to the ground with her dragons and take the throne. She’s interested in ascending to the throne with minimal bloodshed and the true love of the people, a plan that Olenna and Ellaria think is madness. Dany makes her decision final; she will send the Unsullied to Casterly Rock, and use Yara and Theon’s fleet to sail on King’s Landing. Unlike the union between Cersei and Euron, Dany isn’t interested in revenge or power for power’s sake; she seeks a benign rule, a lasting peace, and a contented populace. Olenna is right to be circumspect about this plan; we are talking about Westeros, here, where kings are usually mad and peace is unreliable.

Dany has summoned Jon Snow to Dragonstone, setting up the meeting just about every person on planet Earth has been waiting for. The note comes from Tyrion, the only Lannister that Jon would ever trust, and it’s because of Tyrion that Jon eventually decides to accept the invitation, over the very vocal warnings of Sansa. Once again we see Jon and Sansa arguing before the assembled lords of the North. Sansa thinks it’s madness for the King of the North to put himself at such risk, and, she gets very close to suggesting that doing so would be an abdication of his duty. While Dany is weighted down by the heavy burden of being the mother of dragons and the potential savior of Westeros, Jon has seen the Night’s King and lives with the images of the dead slaughtering the living day in and day out. The only way the living can survive the coming war with the dead would be if Jon can convince Dany there’s an even larger war afoot than the one she’s prepared to have, and perhaps she’d be so kind as to lend Jon her dragons. Jon truly makes every decision based on a simple calculation; will this help in our war with the dead. This laser focus on the task at hand is smart, and hopefully Jon’s single-minded concern will be what ends up saving Westeros in the end. But in the seven kingdoms, the only thing as important as being strong is being smart; Jon is not the political tactician Cersei is, or even his sister. This meeting between Jon and Dany couldn’t be more fraught, and if Dany demands Jon bend the knee, and Jon refuses, the power duo everyone has been clamoring to see in action just may end up becoming enemies.

“Stormborn” was as much a deep dive on the various flavors of governance as it was a nimble, satisfying continuation of the narratives we’ve been watching unfold for seven years. Cersei is relying on hatred to keep things in order in King’s Landing, goading her subjects by projecting Dotharkis as the vile, inhuman other who will take everything they hold dear unless her people stand up and fight them. It’s ugly business, but then again this is Cersei Lannister we’re dealing with, someone who uses vengeance and hatred the way others use oxygen. Compare her ruling methods to Dany’s and you have a study in opposites. This is why Dany was so clearly touched by Varys explanation on why he always seems nearest to power, often serving people he once swore against. “I wasn’t born into a great house. I came from nothing. I was sold as a slave and carved up as an offering…you wish to know where my true loyalities lie? Not with any king or queen but with the people,” he says. Had he spoken these words to Cersei, he’d likely have been killed, but to Dany’s ears they make Varys someone to trust.

There were moments of grace in this episode, none more so than in the scene between Grey Worm and Missandei finally sharing a bed. It was a surprisingly tender, moving moment, with Dany’s two most trusted and long-standing allies coming together in a way Grey Worm feared they never could. This lovely break from the scheming and killing was the rare moment in Game of Thrones where what you wanted to happen happened. Compare it to the brutal finish, when Euron simultaneously emasculated Theon and killed Yara, in which your hope (that Theon would save Yara) was brutally crushed—that’s much more like the Game of Thrones we know, love, and sometimes hate.

That wild moment between Arya and the wolves. Was that Nymeria that saved Arya from being lunch for the pack?

Melisandre complicates matters, almost by nature, but specifically by now situating herself within Dany’s orbit. What do we make of her approach, and what do we think will happen when Davos finds her with Dany when he and Jon get to Dragonstone? Melisandre’s mere presence in Dragonstone will make it very hard for Davos to accept anything the mother of dragons has to say.

There are a lot of gory images in this show, but watching Sam peel off Jorah’s greyscale was especially unpleasant. Do we think Sam will cure Jorah, making him available once again to Dany?

Sansa is either a few moves ahead of Littlefinger, or, we’re being set up for an epic fail in Winterfell for the remaining Starks. Do we think that Sansa is playing with Littlefinger, or, is she the one being moved around like a chess piece?