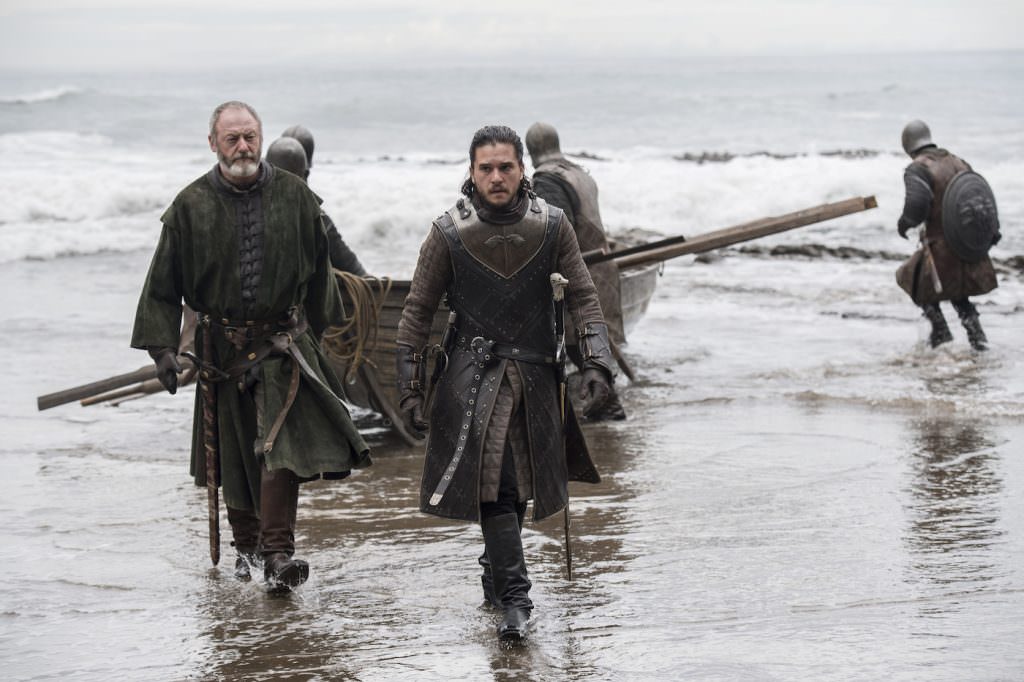 Awkward helloes and brutal goodbyes animated “The Queen’s Justice,” an episode that brought people together in various, mostly uncomfortable scenarios. Before we touch upon the main course, that tasty nice-to-meet-you that took place in Dragonstone, let’s briefly pay a few words to the bizarre Stark reunion up north. What to make of Bran finally arriving in Winterfell, reunitied with Sansa for the first time in years? It was odd and painful, the two Starks have suffered so much since they last saw each other, and besides that first hug, the easy intimacy siblings usually enjoy is gone. That’s partly to do with the fact that Bran’s not really Bran anymore, he’s The Three Eyed Raven, and the Three Eyed Raven is weird. Imagine being frozen forever in your awkward teenage phase, only with the power to “see everything,” and you’re pretty much where Bran’s at. When he starts telling Sansa about how he saw her in her wedding dress, with the snow falling, you could forgive her for wanting to inch away. It’s been years and the kid’s reminding her of her forced nuptials to Ramsay Bolton? She’s the Queen of the North now and has a ton on her plate, so the mystical ravings of her little brother, no matter how potentially important, likely seemed creepy and, ultimately, of little concern for her as she manages the north in Jon’s absence.

So about that intro in Dragonstone…it was briefly, and surprisingly, very funny, as if Woody Allen stepped in to write the scene. You had Missandei introducing Dany to Jon like this: “Here is Daenerys of the House Targaryen, the First of her Name, the Unburnt Queen of the Andals, the Rhoynar and the First Men, Queen of Meereen, Khaleesi of the Great Grass,” etc., etc. One of the ongoing jokes and ironies of Dany is that the breaker of chains has one title after another linked to her name, making her sound like some High Garden snot. They could slip “Night Manager at Arby’s” into the middle of her introduction and you’d likely not even notice it. And when it was time for Jon’s introduction, Davos said, “This is Jon Snow.” Sick burn, Davos! It was one of the few light moments in the episode, and although these two star-crossed half siblings were nominally the main attraction of “The Queen’s Justice,” the queen of that title was referring to one with less titles and zero morals. We’re talking about Cersei of the House Lannister, the First of Her Name, Queen of the Andals an the First Men, Protector of the Seven Kingdoms. Sociopath.

Cersei has done many impressive (and awful) things as she’s consolidated power in King’s Landing, and high on that list has been her ability to make herself the subject of everyone in the seven kingdom’s thoughts, despite, as Jaime pointed out just last week, only credibly controlling three of those kingdoms. Dany has the dragons but Cersei remains on the tip of everyone’s tongue. The Lannisters are less powerful than they’ve been for centuries, yet Cersei is the one worrying Dany most, no matter Jon’s attempt to sell her on the idea that the Butcher of King’s Landing is a distracting irritant compared to the Night’s King. It was Cersei that Euron Greyjoy was thinking of when he attacked Yara’s fleet and packaged her, with Ellaria and Tyene Sand, as a gift for the queen, one he delivered this episode. (Will someone, anyone, relieve Euron of that leather jacket? Perhaps the Mountain? Jaime? Be gone, random Top Shop wardrobe addition!) It was Cersei that Sansa and Littlefinger were arguing about, both claiming to understand the Mad Queen better. It was Cersei that Jaime and Olenna Tyrell were talking about, when the elderly matriarch of House Tyrell drank her poison without complaint, letting Jaime know she was the one who plotted Joffrey’s death (leave it to Olenna to get the last word with her last word). It takes only a little bit of imagination to picture Jan Brady, in Winterfell furs, weeping over the amount of attention the queen down south is getting—it’s all Cersei Cersei Cersei.

Cersei’s justice is swift, merciless and poetic. She makes Ellaria watch as she seals Tyene’s fate with a kiss, using the very same poison that Ellaria had used to kill Cersei’s daughter, Myrcella. Cersei promised Ellaria that she would be kept alive so she might watch Tyene die, slowly and painfully, in the Red Keep. Cersei’s laser focus on past grievances is the cold fusion that animates her tireless scheming. Her seething hatred for everyone who betrayed her helped her craft the brilliant, savage check mate when she obliterated the Sept of Baelor and cleaned the board of most of her enemies a single move. But there is, of course, a massive flaw to single minded vengeance; it can blind you to the bigger picture. Yes, Cersei is unaware of the trouble coming to Westeros in the form of the Night’s King, but note just how little attention she’s paying to her own brother and lover, Jaime. While he administered justice to Olenna Tyrell per Cersei’s command (sparing the matriarch the harsher death that Cersei wanted), Jaime has been visibly shaken by his sister’s transformation into a ruthless tyrant, and one of the most agreed upon theories out there is that he will be the one to end her rule, and her life.

Recent seasons of Game of Thrones have explored the different styles of governance, and Cersei represents the type of ruthless dictatorships that have plagued Westeros for generations. In earlier seasons, it was the noble of heart and mind who were destroyed. Think of Ned and Robb Stark, who tried and failed to navigate Westeros with virtue and dignity. Think of Doran Martell, ruler of Dorne, who resisted Ellaria Sand’s demands for brutal vengeance after the death of Oberyn, and who was stabbed to death for his disinclination towards violence. Yet the brutal, bloody monarchial way of Westeros is coming to a major inflection point with the ever-marching army of the dead, and the tribalism that has dominated the seven kingdoms, the perpetual war for the Iron Throne, mean nothing to the Night’s King. Jon Snow represents the other way, and it is he (so far), not Dany, who is truly Cersei’s opposite, the one trying to democratize Westeros so it might have a chance against the White Walkers. Squabbling over thrones, lusting after payback, these are exactly the behaviors that will lead to the image that Davos so artfully presented to Dany; a skeleton sitting on the Iron Throne. Jon is essentially urging Dany to become Westero’s first democractic leader, one who is able to band together with allies for the common good, but thus far she is more interested in the optics of her rule, getting Jon to bend the knee. Of course Jon can’t do that; if the lords of the North heard he bent the knee, their support would dissolve, as would his rule, and the results would be the same; the dead turning them all into White Walkers. In a way its the Night’s King and his army that are the true democractizing force, the ones who make the palace intrigue of Westeros so pale and pointless.  Cersei’s justice might be swift and merciless, but her scheming, and Dany’s desire to put her down and rule Westeros benevolently, are two sides of the same coin. Either everyone comes together, or everyone dies. Thus far, Jon is the only leader who knows this.

For now, however, Cersei seems to control the board, while things for House Targaryen aren’t going to plan. The Greyjoys fleet has been decimated, with Yara captive in the Red Keep and Theon back in Reek mode, literally washing ashore like a piece of trash. The mighty Unsullied Army are a continent away, in Casterly Rock, while the sea sick Dothraki are marooned on Dragonstone. Dany’s dragons remain the scaly ace up her sleeve she still hasn’t used, and why her advisors won’t let her torch Euron’s fleet is beyond me.

By the episode’s end, Dany had consented to give Jon the dragonglass he needs so desperately. It was a crucial decision, of course, and one that offers a glimmer of hope that these two, long separated power players might come together to save Westeros. That is, if they can avoid the queen’s justice.