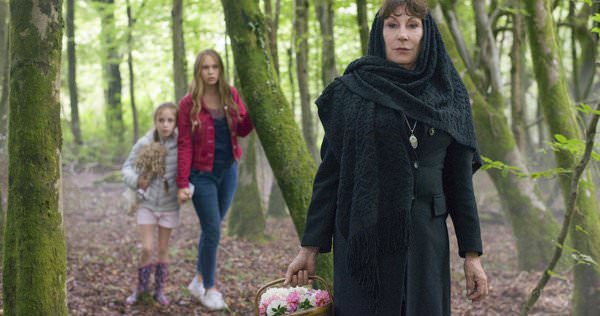 Comic-Con 2017: Melissa Joan Hart Revives The Watcher in the Woods

The Watcher in the Woods is coming back to haunt a new generation, this time directed by Sabrina the Teenage Witch’s Melissa Joan Hart, who watched the original dozens of times in the 1980’s.  On a panel at San Diego Comic-Con, she said, “It’s one of those movies that if you know it, you watched it over and over again.”  Hart and her mother, producer Paula Hart, tried unsuccessfully to get the rights for a remake 20 years ago, and this has been a pet project for both of them ever since.  The 1980 film was pulled from theatrical release to “remedy the ending,” and now has three alternate conclusions on the DVD. “Ours only has one ending,” Paula Hart promised.  “But we did change the last line while shooting,” Melissa Joan Hart added. While there are departures from the first film, key elements like the pond scene and the funhouse are still there. Attendees got to watch the first ten minutes of the remake, which matches the creepy but fun-scary mystery of the original.

Screenwriter Scott Abbott, known for strong female characters in his “Introducing Dorothy Dandridge,” “Queen of the Damned,” and “Rosemary’s Baby” remake, said that “the idea of writing a very strong young female protagonist appealed to me as a father of a 14 year old girl.”   He wanted to “honor the original story,” both the book by Florence Engel Randall and the Disney film, but add a “modern scary sensibility with horror suspense stakes.”  Not too modern, though — it’s “still the modern world, but a little back in time” so that the characters cannot rely on cell phones and Google to figure out what is going on.  The tone is  “gothic suspense rather than splatter — more a horror of the mind.”  The Harts’ production company, Hartbreak Films, wants to make movies parents and children can watch together, more about loud noises than gore. “It’s a perfect slumber party movie,” Abbott said.

One Oscar-winning icon fills in for another as Anjelica Huston takes over the role played by Bette Davis. “She really brings it,” said Hart. “She is fearless.”  Huston was the only American actor, playing a character with a British accent, while many of the British actors in the cast were playing Americans.  “Scared” was a word that was especially hard for them to say with an American accent. “I wish I had just thought of telling them to say ‘frightened!’” Hart said.

The movie was made on location in Wales, which posed technical and language challenges.  “Even though we were all speaking English, the filmmaking shorthand I know from the US is completely different.”  A “hood mount” used for filming scenes in a car, she discovered, is a “bonnet mount.”  It took two days to figure out that the liner Hart needed for the pond scene has a different name in the UK. Filming that was her biggest challenge. They ended up ordering a waterproof case for Hart’s own iPhone on Amazon, and using the phone camera to get the footage they needed.  She was relieved that it came out so well — and that her phone survived.