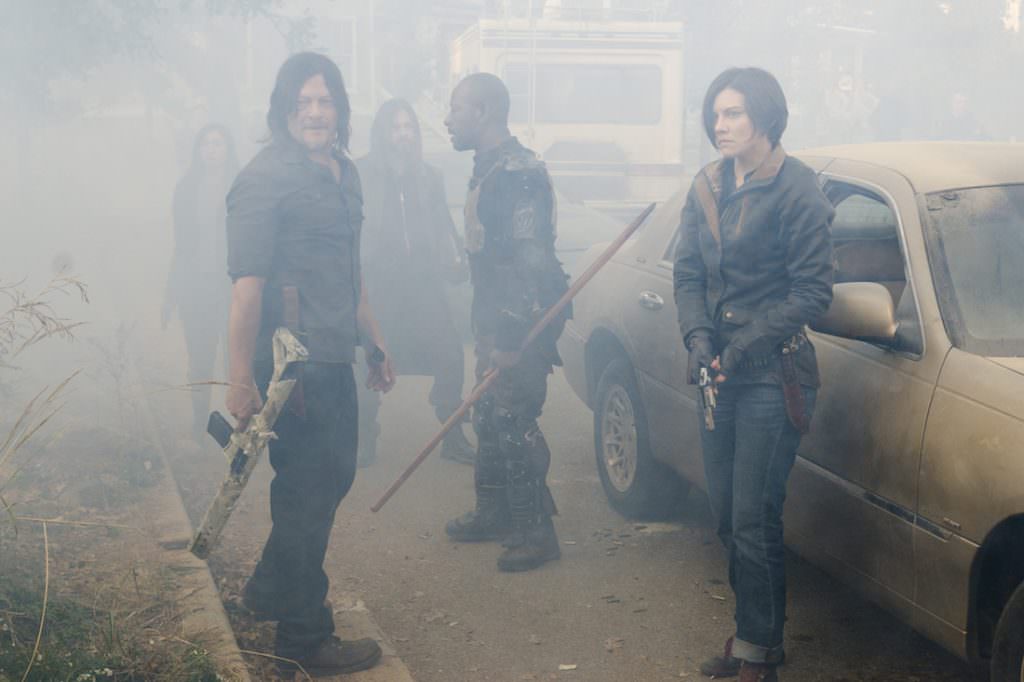 Comic-Con did not disappoint The Walking Dead fans in Hall H and beyond over the weekend. A trailer for the upcoming Season 8 was released, chock full of details for the taking. With the eighth season premiere also marking the show’s 100th episode, big things loom ahead for the series. Using the comic books as a guide, there are plenty of standout moments and references to be found in the trailer.

We see Tara and Carol perched atop an overpass as the dead swarm underneath. But it is a piece of flower graffiti that draws Carol’s attention, perhaps alluding to Carol’s killing of Lizzie, a little girl who posed a great threat to several survivors in Season 4. Just before pulling the trigger, Carol told the girl to “look at the flowers”.

Danger is coming for both Carl and Shiva the tiger, with both finding themselves amidst zombies in the trailer. The action continues with members of an army – perhaps the Kingdom’s – being gunned down in an unanticipated attack. With death imminent, fans can look to the comics for answers as to who could fall in the ambush.

Morgan, who has been with the show from the beginning, is back looking unnerved and unhinged and uttering what could be dooming words. Saying “I don’t die” is a wicked way to tempt fate, but Morgan says it anyways, perhaps indicating the character’s upcoming demise. Yet even while old favorites might be bowing out, new faces are revealed in the trailer, meaning new variables in play.

Finally, in the last moments of the trailer, a cane and an older Rick are featured. The cane could actually be quite telling as, in the comics, Rick’s leg is broken while he fights Negan and it is irreparably damaged, forcing him to use a cane throughout the rest of the story.

The October return of The Walking Dead is just around the corner, and fans will soon be able to piece together the clues for themselves. A show known for its intensity of plot, the upcoming season will surely deliver its signature twists and turns and heartbreak.