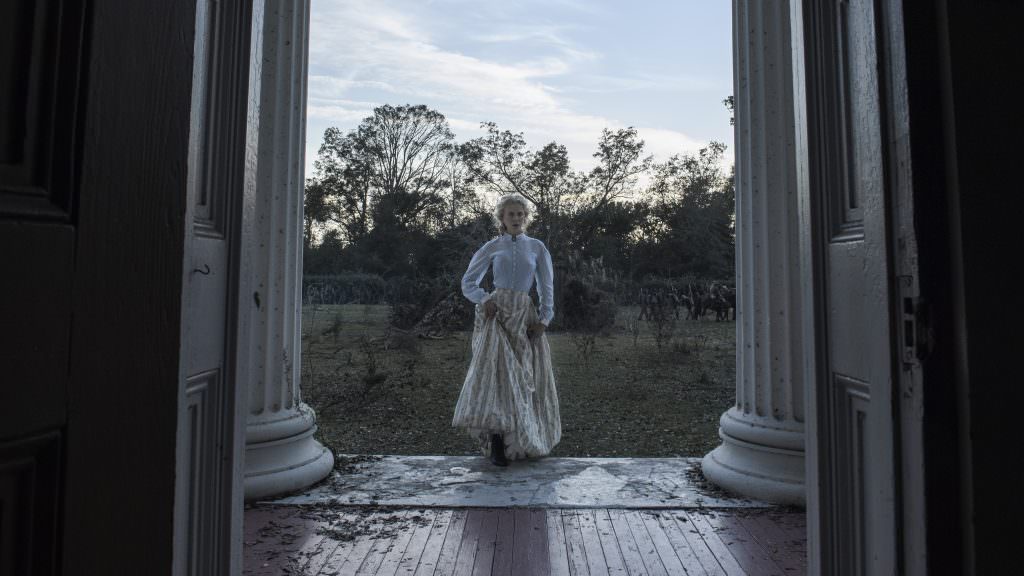 The Beguiled Art Director Sets the Scene for Beauty and Terror

The dilapidated Civil War era girls’ school you see in the intriguing Sofia Coppola remake of The Beguiled is actually a pristinely manicured historic plantation in New Orleans. On seeing the film, you won’t even recognize that the house was also used in Beyonce’s Lemonade. Art Director Jennifer Dehghan and her team are responsible for the transformation that included reverse landscaping to create an overgrown look, covering any signs of modernity, and an intense discussion about dishware. What’s left is a beautiful but eerie setting that draws the audience in and holds them captive just like the women who live there and their unexpected guest. Dehghan’s work proves that even the most idyllic setting can become a house of horrors.

We spoke with Dehghan about controlling the grounds in spite of a drought, transforming the house without any remodel, the detailed historic research that is seen on screen and more

Director Sofia Coppola has said of the film that she sought to tell The Beguiled from a female perspective. How did that affect the way you designed the sets?

The color palette was pretty distinctive. For the interiors, the idea was that it was gauzy white, creams, and pastels with nothing too harsh or jarring. Everything was dusty and older and worn because these women had been on their own for some years during the war. The men were gone, the slaves were gone, and most of the pupils and teachers were gone. It had dwindled down to this small group of women of varying age ranges and they were left on their own to not only maintain the house but the grounds, to feed themselves with the garden, to pick mushrooms. It was just a small group of genteel women who were left on their own to fend for themselves and shield themselves from the outside world, because right outside of their gates, the war was going on. The soldiers would pass by from both sides, and you didn’t really get the impression that either side was preferable. Not in a political way, but in a personal safety kind of way. It was a house of women, so they were definitely trying to shield themselves from all of the men that surrounded them.

What did you do to make that looming sense of danger and fear of the outside world in the film?

We shortened the front lawn and added our own gate. We built the wrought iron gate and the bushes that extend on either side. The house is actually very far back off the state road that it’s on and had a modern white fence. We hid all of that with shrubs and bushes and then brought our fence way up on the lawn, closer to the house, to make it feel like all the soldiers and horses and battalions that pass by are really breathing down your neck. You can see them from the windows, inside the house. You really have to hide from them. Sofia had very particular ideas of how she wanted the front gate. It opens the film, it closes the film, and a lot of important things happen at that gate. I know that she specifically asked that we make it kind of curved and feminine at the bottom, but to rise up to bars and spikes to really make it feel like they’re trapped inside. The women are different heights, but when you would look out, maybe a spike or bar would fall at a different place on a different one of the women, and it would really be like a prison almost. 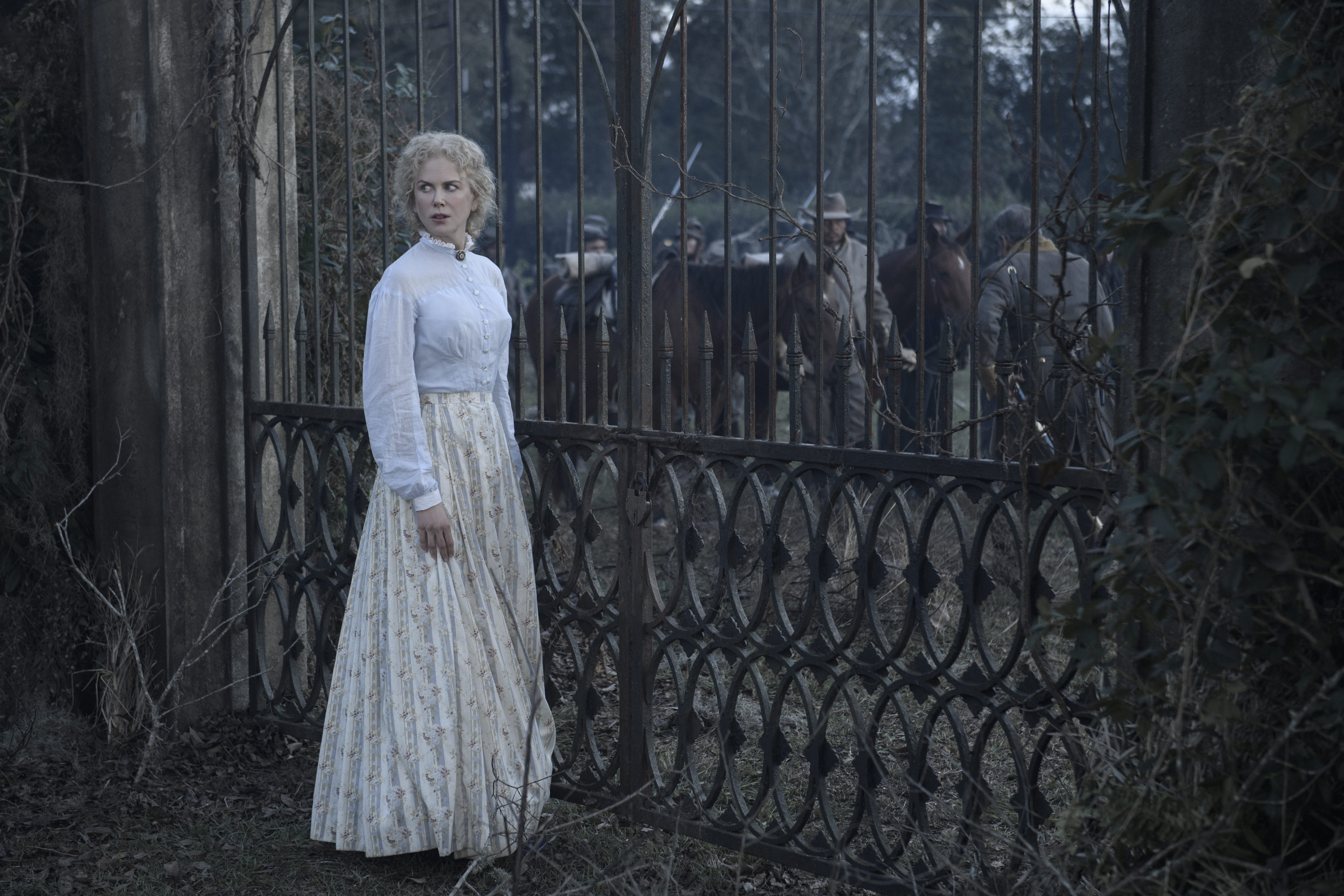 The plantation itself is gorgeous, but does look eerie and desolate. How did you accomplish that beautiful, but isolated feeling?

I kind of thought of it like a floating island because there was a lot of atmosphere, inside and out. When you were inside, the drapes were pulled and the shutters were angled. It was dusty light on the inside. The mirrors were all fogged from not having proper maintenance. When there were shafts of light from the day, they were all dusty and musty. In the evening, it was the warm, almost suffocating, candlelight and smoke. We shot on 35 millimeter film and we still obviously used set lighting, but we used a majority of candles for the night lighting. We had quite a few camera techs to figure out which candles and which wicks and how much smoke they created and what kind of atmosphere that made and how it looked on the screen. The big point on the inside was to make it feel kind of claustrophobic and heated and closed in. 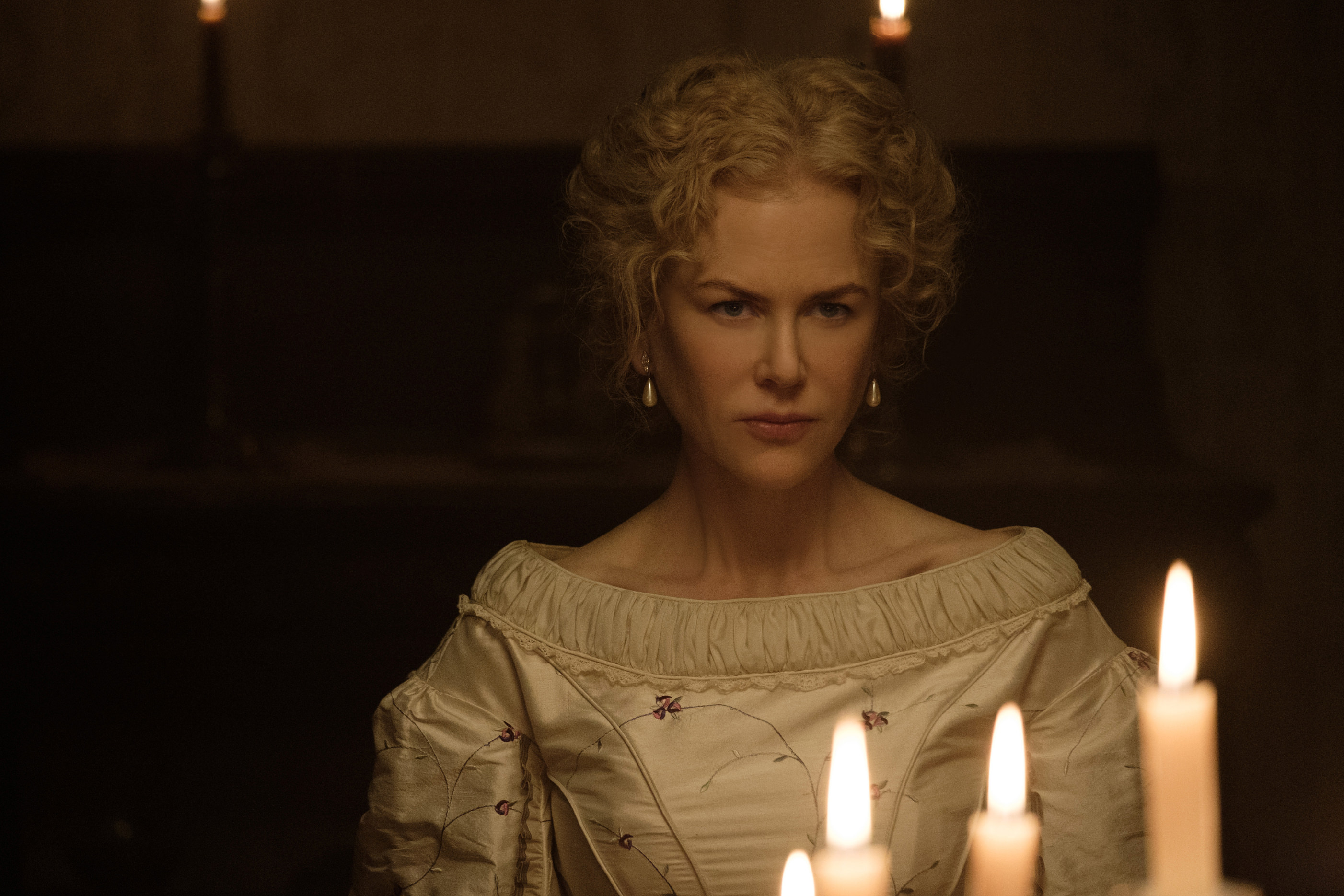 What transformations did you make to the house?

What we had to work with was these two historical buildings. We were not allowed to touch the walls because they had been redone in the original diamond plaster, which is a very difficult and expensive process. We also had to hide all of the light switches and air conditioning vents and outlet plugs to make it period. So on the interior we had to figure out how to do that without actually touching the plaster, which was a bit of a challenge. We changed all the hardware. We hid all the electrical outlets and signs of modernity. On the outside, we also didn’t have the ability to age the front of the building. It was really bright white paint and white columns. The only thing we could do was a bit of a dirt spray and hope that it didn’t rain and wash it off the next day. Then we added a ton of vines and leaves. In the end it worked, but it was definitely a bit of a crapshoot.

How did you shape the exterior sets? Did you find an overgrown location to shoot on?

One of the biggest challenges we had with the exterior was the grounds and the gardens. It was a beautiful lawn, flat and perfect and the opposite of what we wanted. Ideally, the goal would have been to have taken possession of the location months in advance and let the whole place go to seed, but that didn’t happen. There was a bit of a drought when we got there and the grass wasn’t growing. We ended up having to really build up all the grass, cover it with leaves and dirt, sticks and weeds. We installed a lot of different handmade fences with vines growing on them. We had vines going up the house, up the doors, over the windows to try and make it feel like they were really trapped. When we were doing the landscaping, that was one of the biggest parts of my job, because it was such a contrast we had to make from what was actually there to what we wanted. I always thought of it like a corset, so if the house was the chest and the lungs and the women were trapped inside. They just couldn’t breathe, nobody could take a deep breath. The grounds were growing up over them, the gardens were overgrown and closing in on them and the vines were coming up the windows and up the balcony and over the doors. Just like the strings of a corset, tightening and tightening making their worldview smaller and smaller. 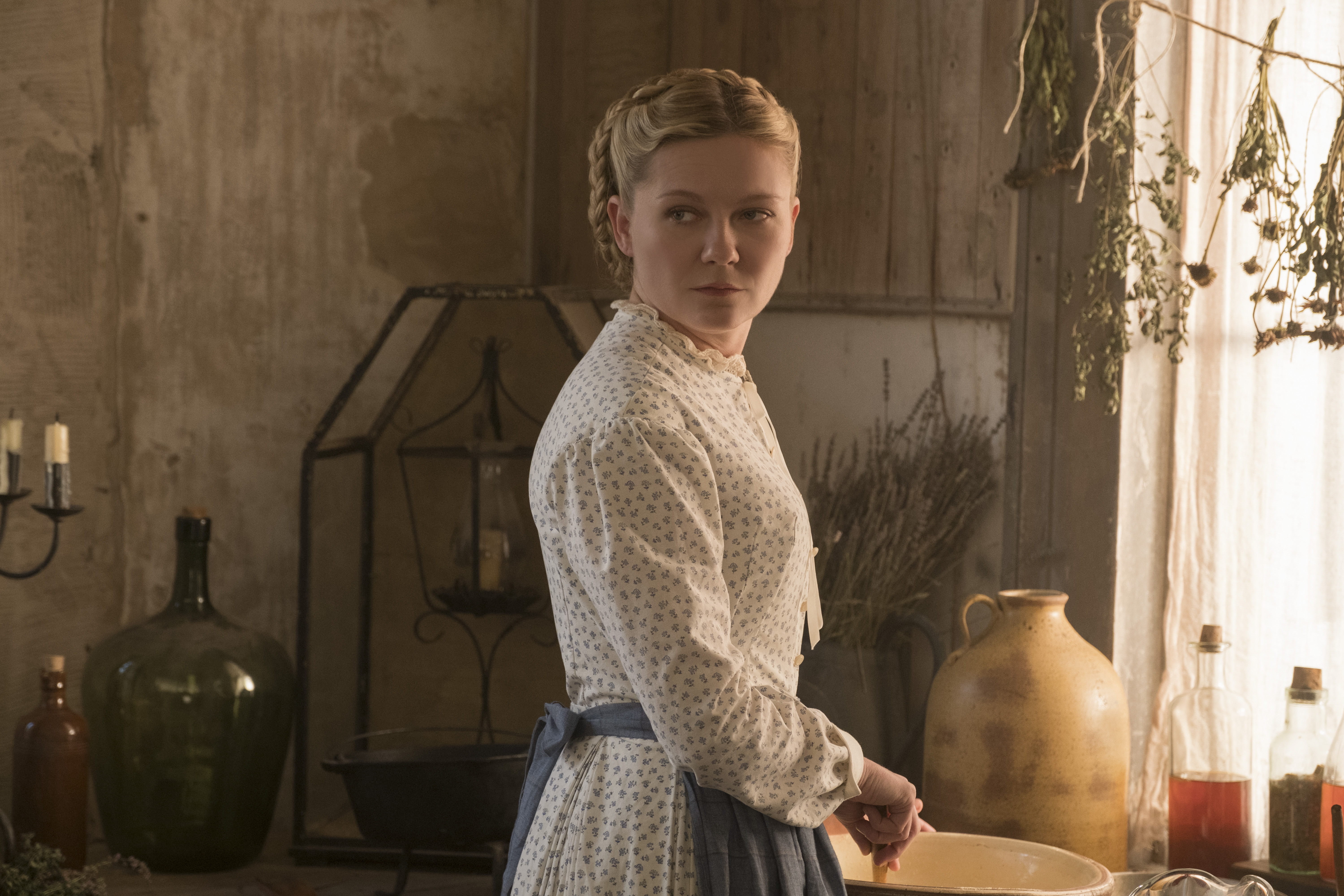 What sort of research did you do to set this piece in the Civil War?

A lot of things are very particular, like the hardware, and the gardening equipment, or how the garden is set up. We did research for what kinds of vegetables and plants would be in the garden at the time. Same with the rose garden. We also wanted to keep in mind that the house would have been stripped down, because it was tough times. They were in a long war and they were more than halfway through it. They had been in it for years so we went with more basic versions of things. They were kind of scrounging for food as well. We didn’t think that they would be eating with their proper silver. The set decorator did a lot of research also on table settings and etiquette of the time and there was a stark difference between the tools, equipment, bowls, cups, knives, and utensils that were used in the kitchen, which would have been slave quarters, but now these women are using it. They’re cooking their own food and preparing their own meals versus when they tried to impress McBurney with the fancy dinner.

What were the discussions like the creative team had determining how the characters would be living at this point in their lives? 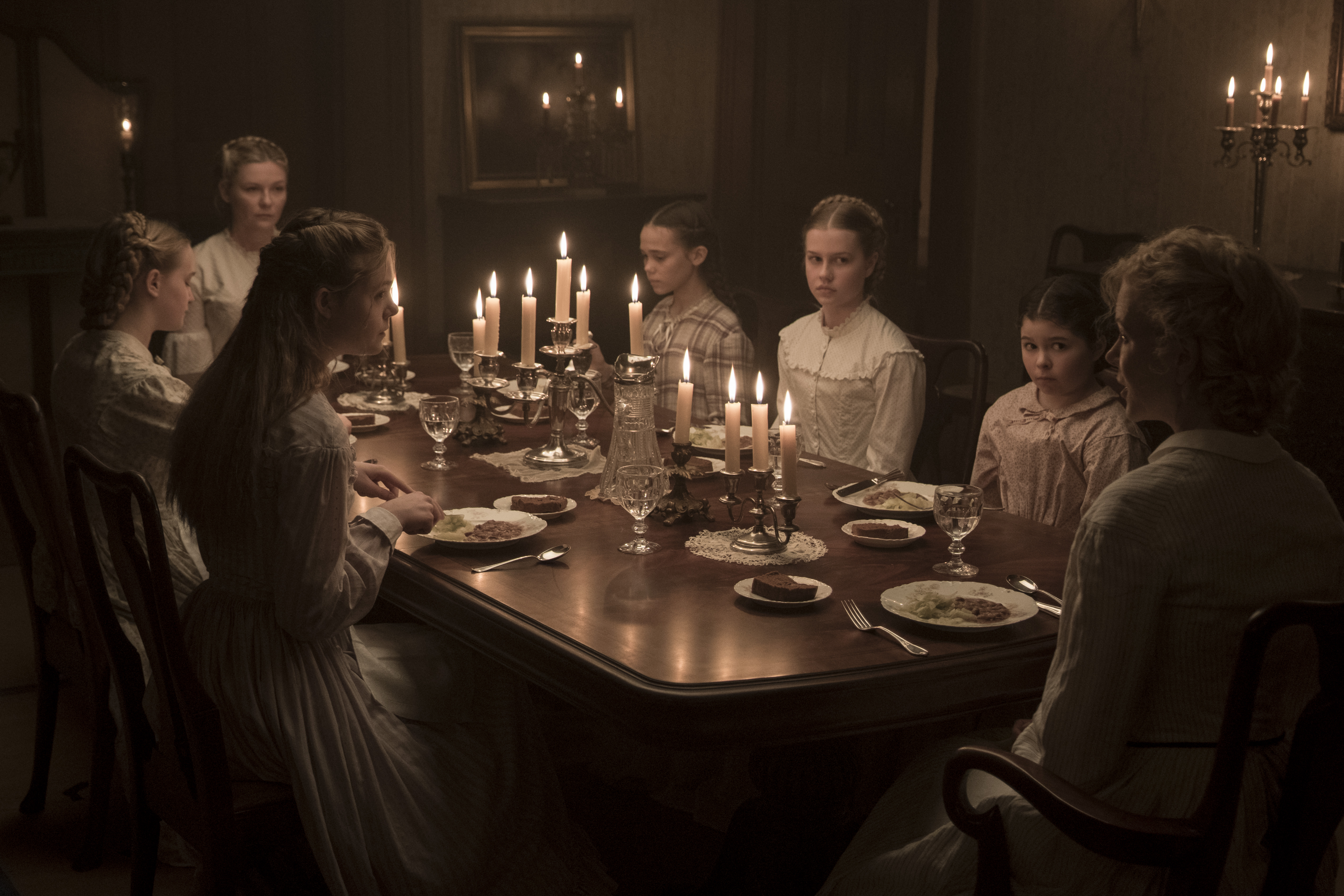