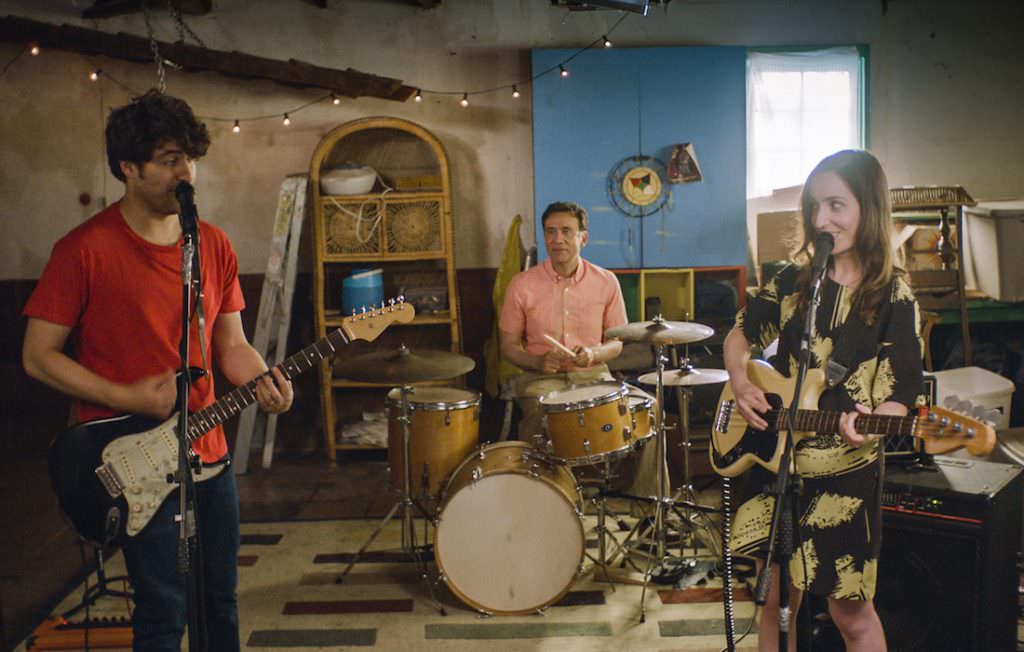 Zoe Lister-Jones has a robust career as a comic and dramatic actress. She’s a regular on the CBS sitcom Life in Pieces and had a featured role as then-Senator Joe Biden’s assistant in HBO’s 2016 drama Confirmation about the Clarence Thomas hearings famous for the testimony from Anita Hill.

But in the indie film world, Lister-Jones has thrived by creating her own roles and wearing many production hats. She co-starred, co-produced, co-wrote and performed on the soundtrack of the 2009 micro-budgeted breakout feature Breaking Upwards, directed by Daryl Wein who’s now her husband. Again collaborating with Wein, Lister-Jones co-wrote and starred in Lola Versus (2012) and Consumed (2015).

Those films, she says, “were boot camp for me” that led to her directing debut with Band Aid, the new comedy that Lister-Jones wrote and stars in with Adam Pally about a battling married couple who form a rock band as marriage therapy and perform their fights in songs. The film premieres tomorrow, June 9.

“My favorite films navigate comedy and drama effortlessly as a mirror to human experience. This movie was about authentically portraying a long-term relationship and sometimes that can be ugly, sometimes funny, sweet, lustful. So it was about entering all those spaces simultaneously,” Lister-Jones says. “I wanted to explore the ways in which couples fight. I had not seen it portrayed on film in way that felt authentic to my experience at least. I think it’s an insight into the way a couple loves.”

Lister-Jones, a singer, learned to play bass for the role and wrote the lyrics to the songs that she and Pally perform in the film. Pally played guitar in high school, so he dusted it off and the pair rehearsed prior to shooting, then performed all their songs live in the film. A Band Aid soundtrack has also been released.

“I always knew I would act in all of my projects; I’m always somewhat selfishly writing for myself. I didn’t initially know I’d direct,” says Lister-Jones. “That happened once the script was finished and I started sending it out to producers and we started talking directors. Then I knew how much I wanted to direct it and I knew it would be a risk for a veteran producer to take on me. But it was part of the process for me. This project was, in many ways, a test for me to see if the creative process could be fun. The best way to conduct that experiment was if I was in control.”

Being in control empowered Lister-Jones to take another risk: she hired an all-female crew to work on Band Aid. Her first hire was producer Natalia Anderson, who’s also a producer on Life in Pieces and, with a short schedule (it was shot during a Life in Pieces hiatus) and a small budget, the two went to work.

“I saw she was such a hustler and such a gangster,” says Lister-Jones of Anderson. “It’s a really specific skill set to be able to produce an indie film and to produce it well. My trailer on [the Life in Pieces] set became our production office … I said, ‘do you want to hire an all female crew?’ and Natalia said ‘yes’ immediately. It helped to have that voice of encouragement.

“No matter how much attention gender inequity gets, it’s still the big question mark of how to actually effect change. I could say, ‘I’ll hire as many women as I can’ but I knew I was going to fall into the same trap everyone else does which is ‘but that guy has more experience and he’s going to help everybody feel more comfortable’ and all the traps that immediately limit the hiring pool,” says Lister-Jones. “That was biggest risk. There are many women with lots of experience but certain hires didn’t have much experience and it OK. It was better than OK. That was the lesson. You can take the risk and should take the risk..… It was the most wonderful, productive, efficient, kind and humble set. It’s not that that can’t exist with men, but it was specific to having a group of women working in community together.”

Working on many indie film sets in different capacities gave Lister-Jones the skills and experience to know what kind of atmosphere she wanted on her set and what kind she didn’t want.

“I’d seen so many indie films I was a part of be infused with this burdensome energy, ‘let’s just get through this,’ all the ways the complaints can really be infectious on set and impact the art itself,” she says. “For me,  it was an experiment in finding joy in the work. All the risks felt exciting. Being an actor-producer hybrid helps you. As an actor, you could go through the day with blinders on; your job is singular. But being a producer is essential to being a good director.

“I wanted to create an environment where women could feel their most confident, where they called every shot, and had no one else to answer to or be interrupted by or condescended to; a place where we could feel ownership over the art we were making.”