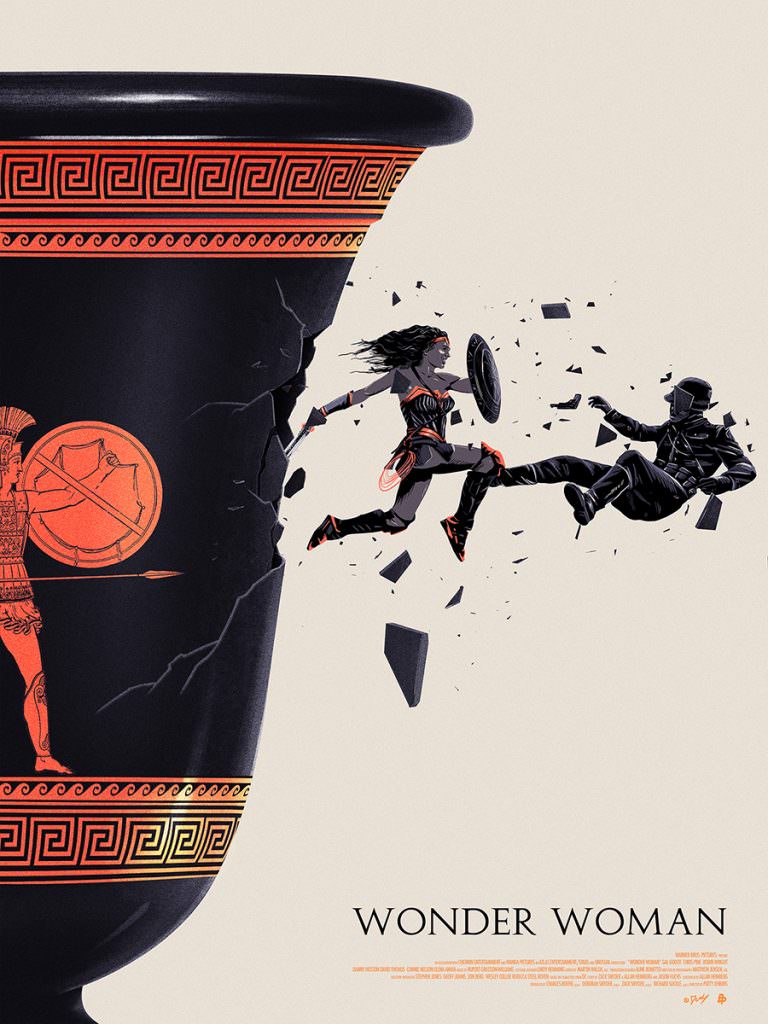 Wonder Woman is the Best Kind of Feminist Superhero

When William Moulton Marston created Wonder Woman for DC Comics in 1941, he invented a character neither comic books nor television had yet seen — an independent swashbuckling bondage-inspired heroine, admirable in equal parts for her smarts, superhuman physical abilities, and the sexy way she threw off the chains of the evil men who would drag her down. It was an S&M-inflected commentary, at the time, on the more subtly insidious ways that men tried to hold back fierce and capable women, an issue to which Marston was unusually sensitive (Harvard-educated feminist Marston lived, evidently harmoniously, with his wife and mistress, the latter of whom was Margaret Sanger’s niece).

Director Patty Jenkins’s Wonder Woman for Warner Bros. puts the bondage in actress Gal Gadot’s hands — among her other weapons, she’s mean with the hot, glowing “Lasso of Truth,” which besides merely tripping them up, impels its captives not to lie. It’s an apt prop; before creating his heroine, Marston was notable for inventing the lie detector machine. We rarely see Gadot’s Wonder Woman lose her powers via chained bracelets, as was the case with past Wonder Women, since hardly any of the men, from sweet straight man Steve Trevor (Chris Pine) to evil General Ludendorff (Danny Huston, based on the real-life General Erich Ludendorff, promoter of the stab-in-the-back theory that posited Jews and Bolsheviks were responsible for Germany’s WWI defeat), can keep up with her. Instead, Diana Prince, as Wonder Woman is introduced in the human world, is an inevitable but subversive feminist.

The film introduces Diana as a child on the enchanted island of Themyscira, a gift to the Amazons from Zeus, where they train endlessly for future battle wrought by Ares, the banished god of war who has brought evil to men’s hearts in the world outside Themyscira. Diana’s mother Hippolyta (Connie Nielsen) tells her she made her from clay, with Zeus bringing her to life. In fact, (spoiler alert) Diana is Zeus’s daughter, a sister and fellow god to Ares. She doesn’t know this, but when war comes to Themyscira via Captain Trevor’s crashed plane and the rowboats of German soldiers pursuing it, she heads out into the world of man to find Ares, kill him, and free the Germans of his nefarious influence, thus ending WWI. Or so she thinks.

Instead, the pure of heart heroine learns over and over that men, everywhere, are prone to greed and violence and bigotry. Lusty but plucky Sameer (Saïd Taghmaoui), one of the motley crew enlisted by Steve to get Diana to General Ludendorff, hits on our heroine but trusts her and believes her wild backstory, and in a moment most writing on Wonder Woman glosses over, tells her he doesn’t even want to be in the business of war. His dream was to be an actor, but he was “the wrong color,” so hustling and war profiteering it is. The group’s tracker, The Chief (Eugene Brave Rock), who also trusts Diana’s wacky Ares theory, explains to her that his unlikely presence in the middle of a European war is thanks to Steve’s rapacious fellow Americans, who in prior conflicts have taken almost everything from his people. Meanwhile, the work of poison-genius Dr. Maru (Elena Anaya), Ludendorff’s accomplice, introduces Diana to the unfortunate truth that the women in this world can be every bit as evil as the men.

Yet Diana’s belief in human potential persists, and when she gets to the final showdown (a drawn-out, exhausting CGI battle that might leave a viewer either jittery or ready for a nap, depending on his or her personal constitution), her faith in their better nature is the driving factor behind her defeat of Ares. By the end of this 140 minute film, however, that point almost seems moot. More poignant, and enjoyable, are moments given lesser billing in interstitial scenes: Diana innocently informing Steve she knows all about male-female relations, as she learned about them from twelve volumes of an ancient Greek treatise on the topic — books he wouldn’t likely enjoy, she says, as they conclude that men are required for procreation, but unnecessary for female pleasure. Steve’s secretary explains her job description to a bewildered Diana, who answers that where she comes from, that sort of work is called slavery (this same secretary later pluckily stops an escaping undercover German with Diana’s sword). And of course, there is the unlikely utilitarianism of the Wonder Woman get-up, a leg-baring, close-fitting and yet far more suitable outfit for a fighter than the constricting clothing of the era which Steve and his secretary try to get her into (“it itches” and “it’s choking me” representing just a few of her complaints).

Four years after her creation, Marston told a Family Circle interviewer that, “Frankly, Wonder Woman is psychological propaganda for the new type of woman who, I believe, should rule the world.” The clever and clear-eyed Diana of Gadot, Jenkins, and screenwriter Allan Heinberg is faithful to that ideal, in alternately tongue-in-cheek and clear-cut ways. Exceeding opening weekend projections by about $20 million, Wonder Woman is on track to set new standards, in both box office returns and, more rewarding for audiences, in the portrayal of superheroes who happen to be female.