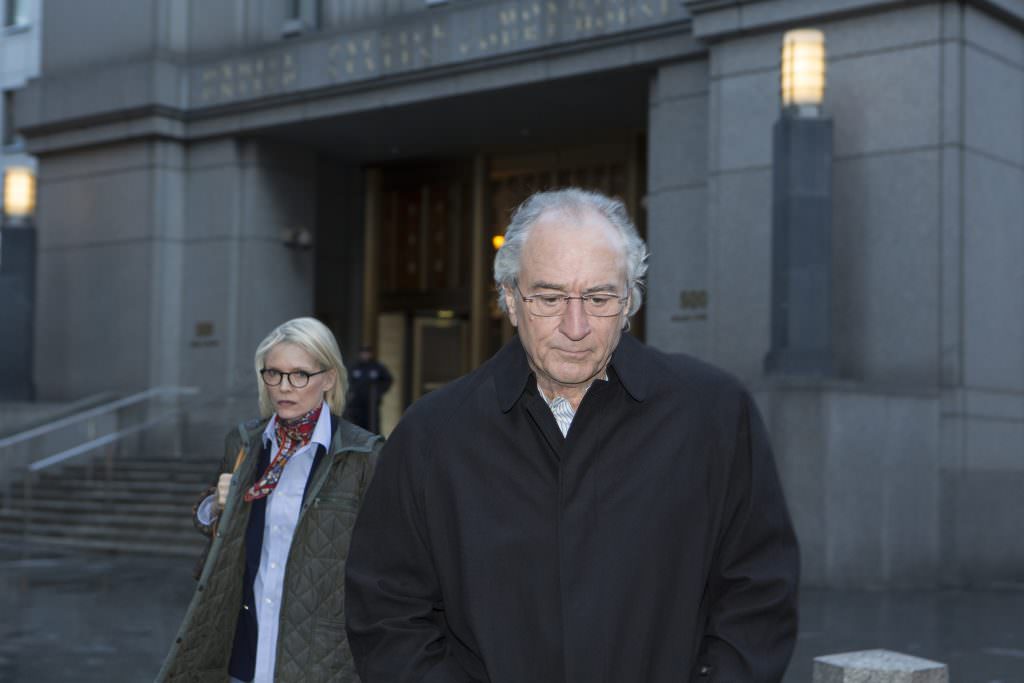 Production designer Laurence Bennett was responsible for creating a visual language for a film without sound, and the results earned him an Oscar nomination. We're talking about Bennet's work on Best Picture winner The Artist, which followed the story of a silent movie star’s life turning upside down after he falls for a young dancer only to witness their careers zoom in opposite directions with the arrival of talking pictures.

While Bennett's currently working on David Simon's The Deuce, for HBO (about the rise of the porn industry in 1970s and 80s New York), he spoke with us about another HBO project he helped create a visual language for; Barry Levinson's The Wizard of Lies, about the infamous rise and fall of Bernie Madoff. Played by Robert De Niro and based on Diana Henriques' book of the same name, the film follows the notorious Ponzi schemer as he swindles millions of dollars and, in the process, ruins many lives, including those of his own family. Bennett's sets for the film were largely influenced by Madoff’s compartmentalized life, the way he portrayed the quiet, thoughtful and uncannily gifted businessman who, in reality, was building an unsustainable tower of lies that would eventually crush him and his family.

Tell me about how you approached this story, one that's still so fresh in people's minds.

We were looking at the film as sort of a mystery. At the end of the day we all know the gross scale of what Madoff did, but we wanted to look at how he got away with it for so long. We really wanted to tell it in little fragments, and there’s a slow progression from the objective to subjective as the film goes along.

How do you show the shift from objective to subjective reality visually?

That arc was an overwhelming organizational thing for me. It begins with him in prison, and you're looking at the stark look at the face of this megalomaniac, but then we go back and dive into his life of incredible comfort, and we built this slow arc towards the disintigeration of his scheme, and it becomes more subjective, much darker, as it goes long.

I do that by looking for thematic elements in the story. One theme that was very obvious to me was the theme of exposure and concealment. We used this theme as a visual element. One way we did this was fairly obvious; our uses of light and dark. This guy's deceit was very carefully manipulated. He was capable of being very chameleon like, so those themes, exposure and concealment, light and dark, were really valuable in all of the design decisions. 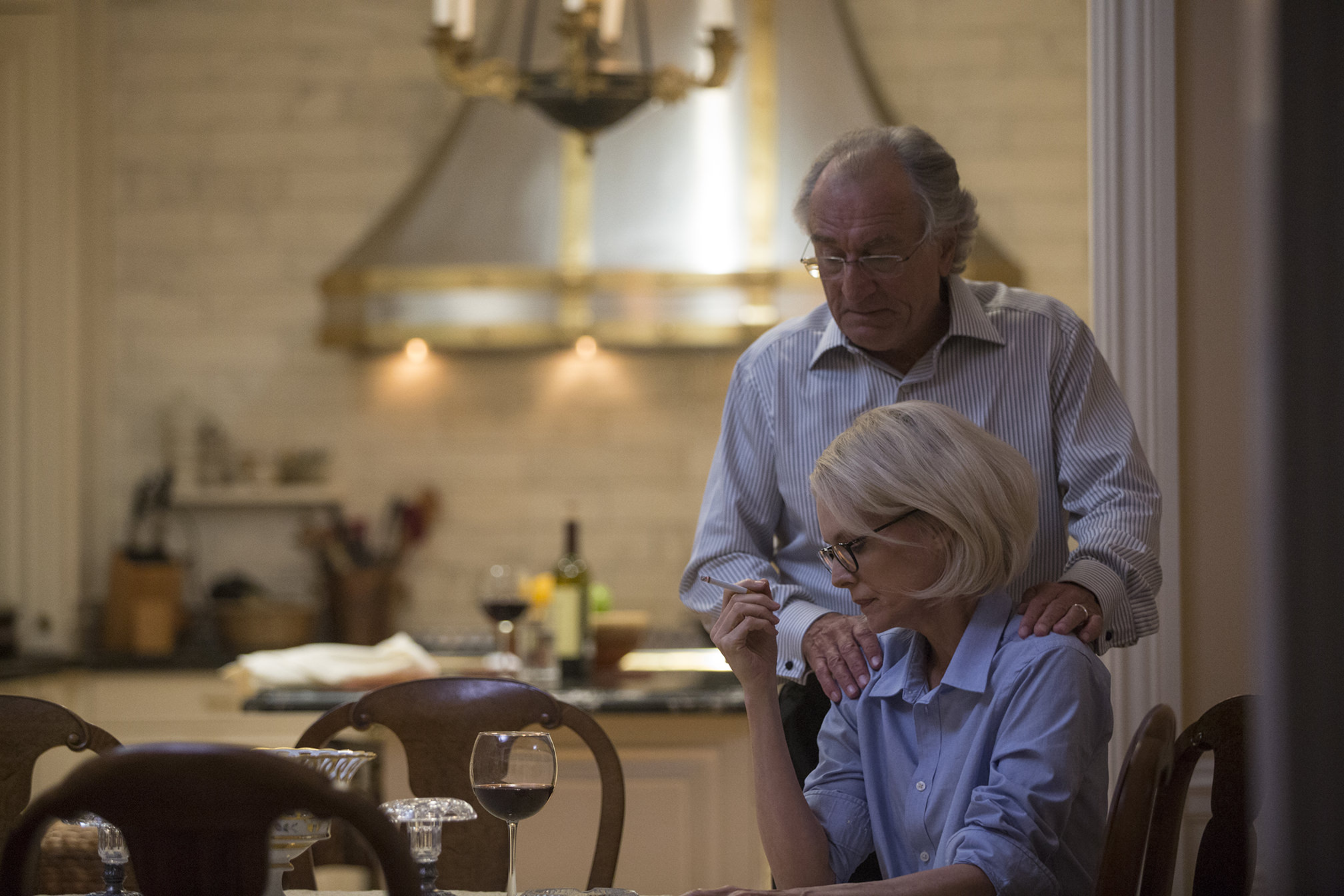 How much of the film was shot on location in New York versus on a set?

The bulk of the picture was done on location. There were sixty some odd sets over the space of two plus hours, so it really made sense to do as much as possible in practical locations. The prison visiting room was an obvious build, more becuase of the long sort cat and mouse conversations with Diana Henriques, just for complete control and quiet and isolation. Also the severity of his prison was exaggerated a bit with the stage set. There were a handful of other sets, like the 60 Minutes footage, the Joy Behar show, and the elevator in Madoff’s apartment—we shot a lot of the footage in an actual apartment on Riverside drive, but it had no elevator, so we built one and replicated it. 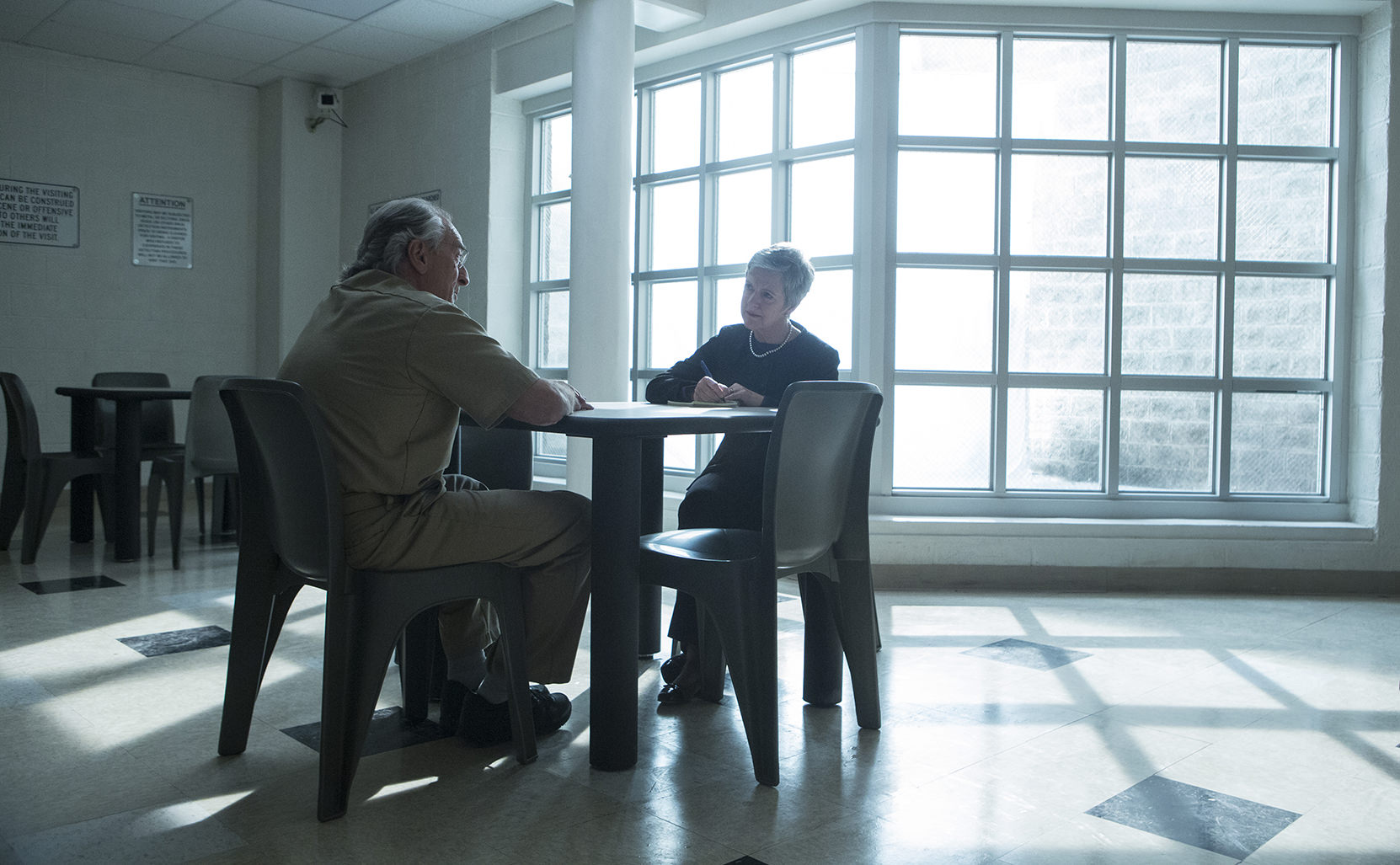 What did you have to do to make that apartment on Riverside Drive look like the Madoff's penthouse?

We displaced the owners of that apartment for several weeks, took out everything they owned, and completely repainted and transformed the place. Because we needed to do night and day work, we had to control the light, so we built contrapations outside the window that allowed us to create greenscreens to use for creating day or night. There was never any chance we’d be go able to go where the Madoffs lived, or the lipstick building where their offices were. The damage from the Madoff affair was so extreme, there’s so much acrimony surrounding the financial damage he caused in New York society, that there was never a chance we were going to be able to get near the actual places. 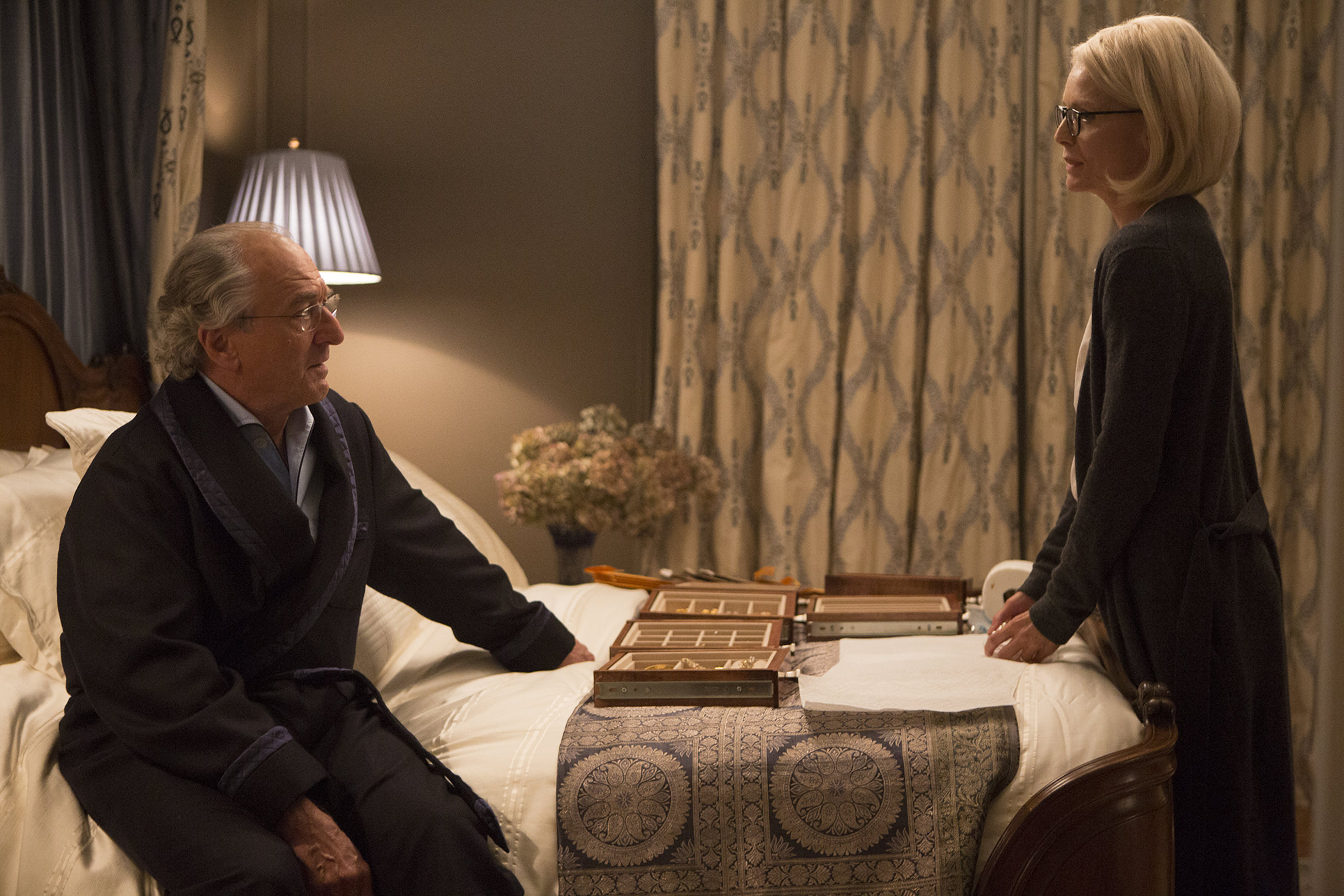 The one thing I found looking at the Madoffs actual penthouse, their house in the Hamptons and their palm beach house, was that we needed to give them a little bit of a taste upgrade, because an audience’s taste for wealth and comfort wouldn't align with what their places actually looked like. I think Ruth got a decorator to do the penthouse, but it still didn’t look as rich as the audience would expect. It wasn’t the kind of ostentation that you’d expect. So we stayed with a very traditional style, it really had more to do with the selection of fabrics and textures in the place, but we gave it a polish.

What other sources did you use to research the Madoffs?

I did very thorough visual research, I read a lot about the family, and then I had an incredible resource in author Diana Henriques. I alsovhad the opportunity to meet the agent who lead the raid on the offices. Being able to talk to him on what he encountered the morning they took over was crucial.

As for the prison where Madoff ends up, there’s actually no visual research I could find about Butner Correctional Facility in North Carolina. Unsurprisingly there's minimal visual material available for the interior of federal correctional facilities in general. We found what I thought was a good analog, in New York's Mid-Orange correctional facility. It was built around the same time and it had the same guiding principles, so I could key the exteriors, hallways, and the cell block, and then I based the prison visiting room on that architectural style. At the end of the day, because the scenery needs to be background to story, I would hope what was shot on location and what was shot on a stage isn’t distinguishable. 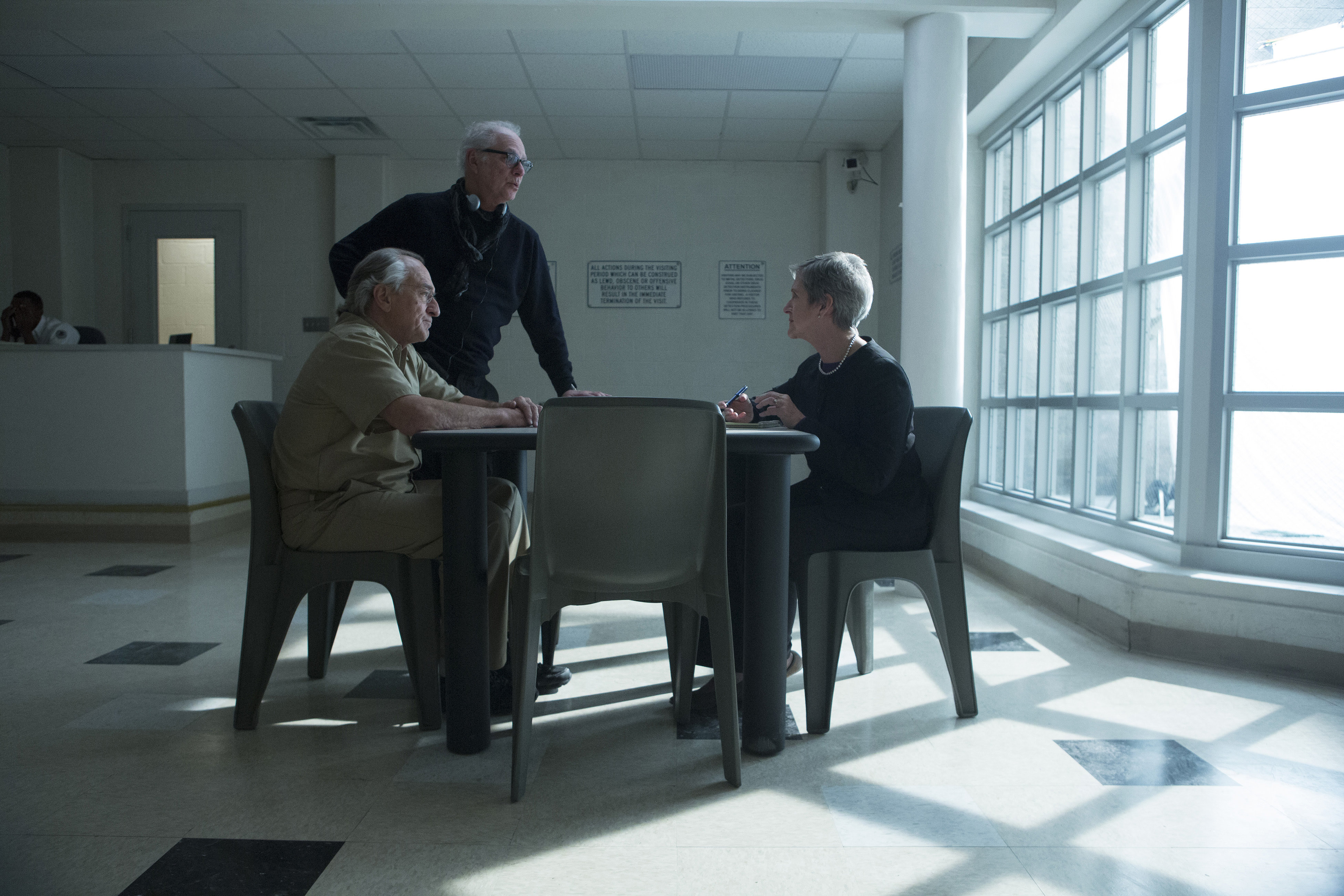 What would you say is your primary goal when you start a new project?

One tries to get the emotional tone right. In terms of helping and underscore and support the emotional context of scenes, a place like Mark [Madoff]’s loft where he commits suicide, how that functions, how he feels in that place with his family to when his body is discovered; all the ways that functions are important to me. Also there’s something about the social events that the Madoffs had…the party on the beach in Montauk, the look of that, the feeling of that, and the Palm Beach event, where the jazz combo is playing as Bernie’s working the room, light was really important in those moments. 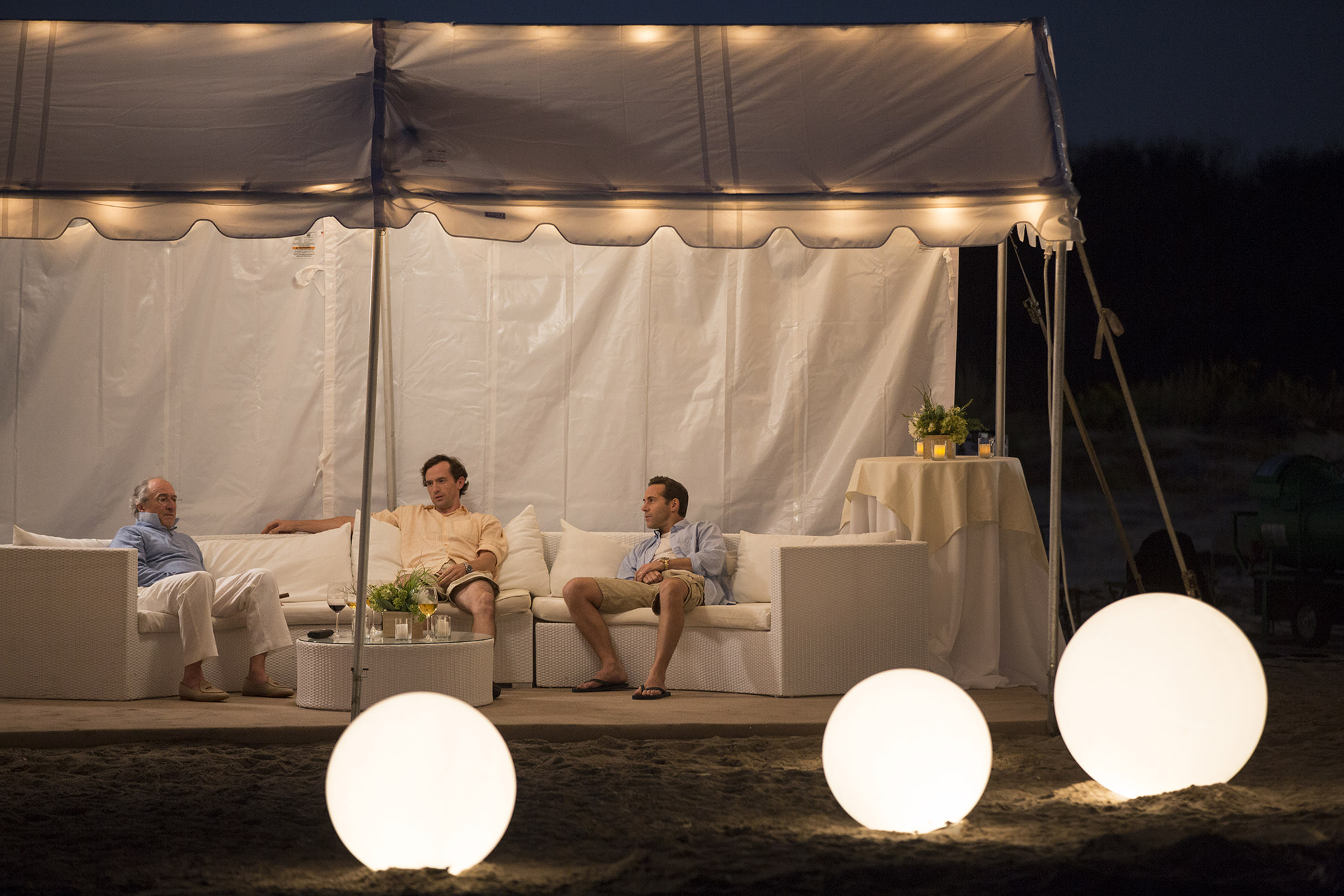 Hopefully the photography, design help tell that story. One thing I would say there’s something about the rhythm in this film that I think the design supports. In terms of this move towards the subjective, the move towards looking at Bernie’s psychological state, I think, certainly the first time I saw the finished piece, there’s a frenetic quality to when he’s coming unglued and realizing he can’t keep these balls in the air, I think it was very smart of Barry [Levinson] to begin with the demise, and then work backwards. I don’t think most people knew the toll it took on his family, in the overall story the death of his sons has been lost. It’s really a tragic story, and while it doesn’t engender empathy for him, it does for his family.

There are some, um, topical resonances at work here too, with regards to a rich, powerful New York family…

We completed photography before the election began in earnest, and watching it now there’s definitely some resonances I wasn’t expecting. There’s something about a con artist, that’s all I’ll say. [Laughs]