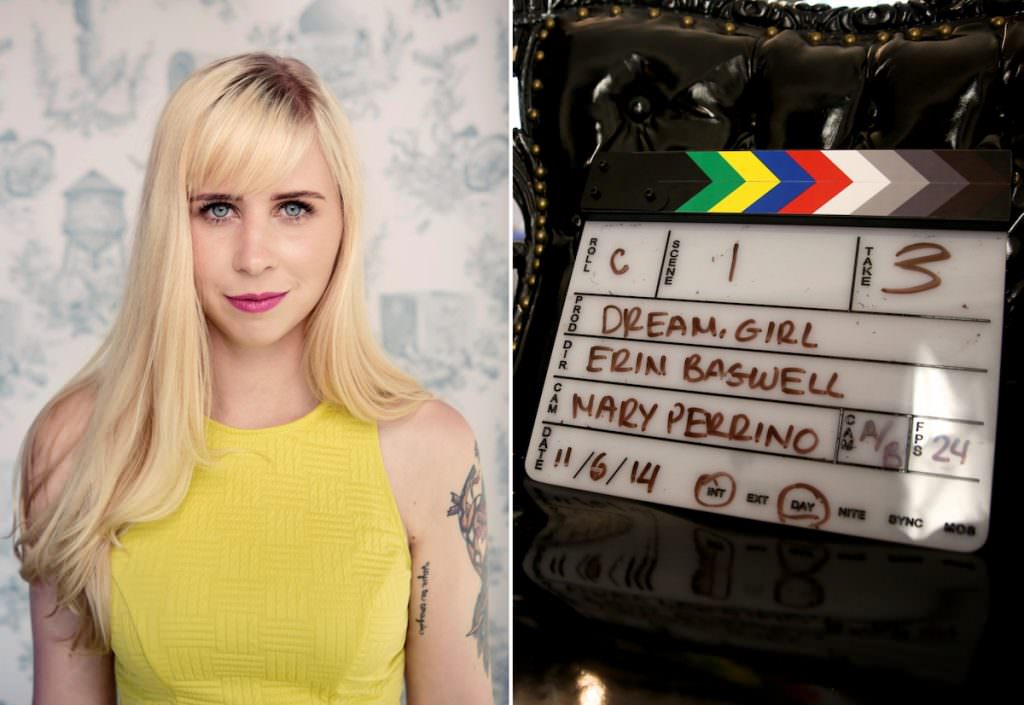 You could be excused for reading into the success of Erin Bagwell's directorial debut, the documentary Dream, Girl, and assume she's a graduate of one of the most prestigious film schools in the country. Dream, Girl focuses on more than a dozen female entrepreneurs, uncovering their unique paths, their many challenges and setbacks, and their insights into how they succeeded. Bagwell hired an all female crew, moved into an office, created a trailer, pitched her first angel investor, and by May of 2016 was premiering her film at the White House, where it was chosen to be screened as part of the United State of Women Summit. Erin's been singled out by Oprah, TED, Vogue and Forbes as a young filmmaker to watch, one whose committment to social impact is paramount. This year, Bagwell was selected to be part of the American Film Showcase, which is part of the U.S. Department of State in coordination with U.S. embassies and consulates. She has joined other American documentarians on trips to various countries around the world, screening her fim, leading filmmaking workshops and speaking with people about her film's message.

Yet Erin isn't a graduate of NYU or USC of AFI—she created this life for herself after she'd already become successful in corporate America. She quit her job and committed herself to doing what she loved most, telling stories about real people doing extraordinary things. Today marks the year anniversary of Dream, Girl's premiere. We spoke with Bagwell about her incredible journey into documentary filmmaking, the fear of stepping away from a salary and into the very challenging world of filmmaking, and how she found the film she wanted to make.

Tell me about those first few months after you quit your job and embarked on this filmmaking path.

It was really scary, obviously, when you’re starting out and don’t know where you’re going or what you’re doing, but I knew deeply I was making the right decision for me. The job I was at was really hard for me emotionally, that space where I felt so unseen, and was treated so differently from my male counterparts. I felt scared about leaving my job, but I knew deep down it was the right thing for me to do. I needed to move myself forward and create a better life for myself. So in the beginning it was a lot of figuring it out and taking it day by day. The idea for Dream, Girl didn’t come until a few months after I quit. The momentum slowly built, from the initial idea to our Kickstarter campaign took six months. I had figure out what kind of stories I wanted to showcase. It was a slow but exciting process. I felt really open, like I had all this freedom to dive into something totally different.

What was your first big 'ah ha' moment?

The first big decision was whether I was going to focus on female CEOs in the corporate sector or female entrepreneurs. We have a lot of great female CEOs and executives at companies like Pepsi and Facebook, but I decided I really loved the idea of focusing on entrepreneurs, those people who quit their job and build a business. Going up the corporate ladder is a totally different journey, so I wanted to figure what I wanted to learn, and that was entrepreneurship. How do you build a company, how do you make money from your passion? So that thematic decision was the first decision, then the next choice was interviewing women I could spend a lot of time with, learn from, and who wouldn't get sick of me [laughs]. Trying to find women I aligned with in some capacity. And also women from a lot of different backgrounds. In the kickstarter trailer, it was a lot of young women’s perspectives, then after that we looked at a broader spectrum. Our theme always remained the same, then we tried to get closer and closer to this big breath of experience that these women have. 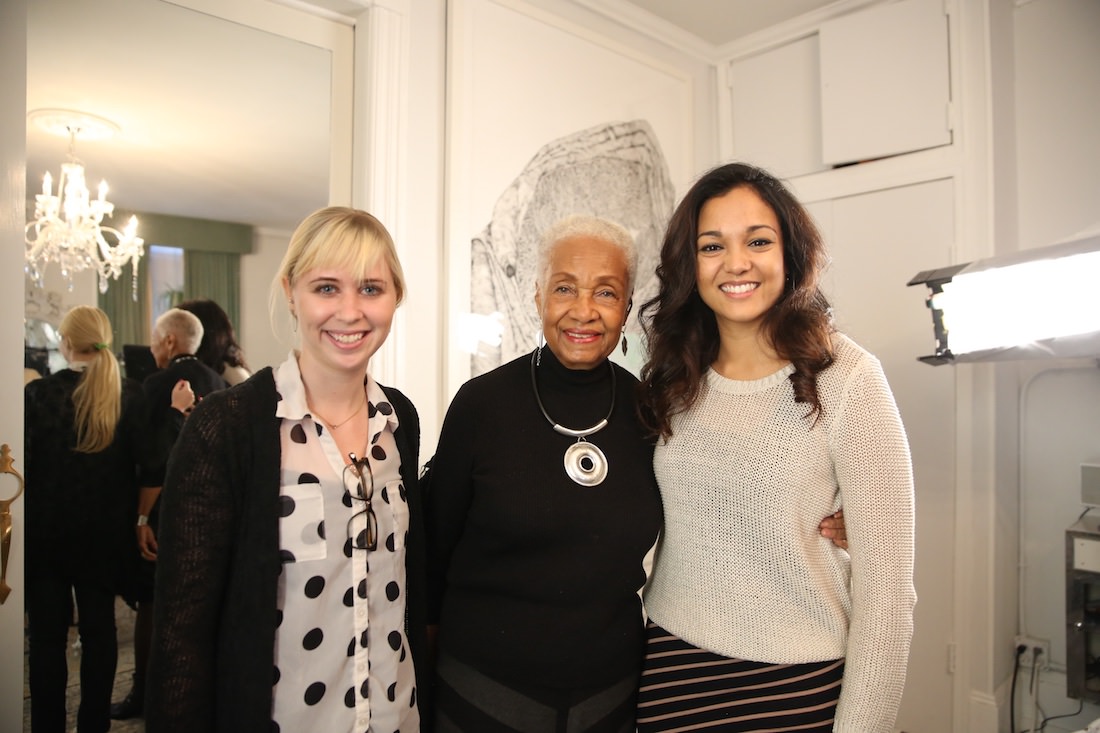 How willing did you find the people you reached out?

It was interesting. It was a mixed response between some people being excited to share their stories, then on other hand we have women who are afraid to tell those stories, to share the darker days of being an entrepreneur—some people don’t feel comfortable expressing that. My job is figuring out who’s going to let me in a little bit, and who can I build a relationship with.

How often did your find yourself surprised by what you learned from these women?

One thing that always really shocked me, although it seems obvious now, is that I always assumed if you built your own company the level of discrimination you’d feel would diminish, but that doesn’t exist. These women still come across sexism ecery day, via a board or their peers or competitors. Then the level of vulnerability that these women have on screen was astonishing. I’ve read all their books, seen their interviews, yet I was shocked with some of the candid, vulnerable things we got on set, and I think that’s because we had an all-female crew, we created a safe space, and when we talked to them it felt really open, and I was always blown away by how much they shared with us. 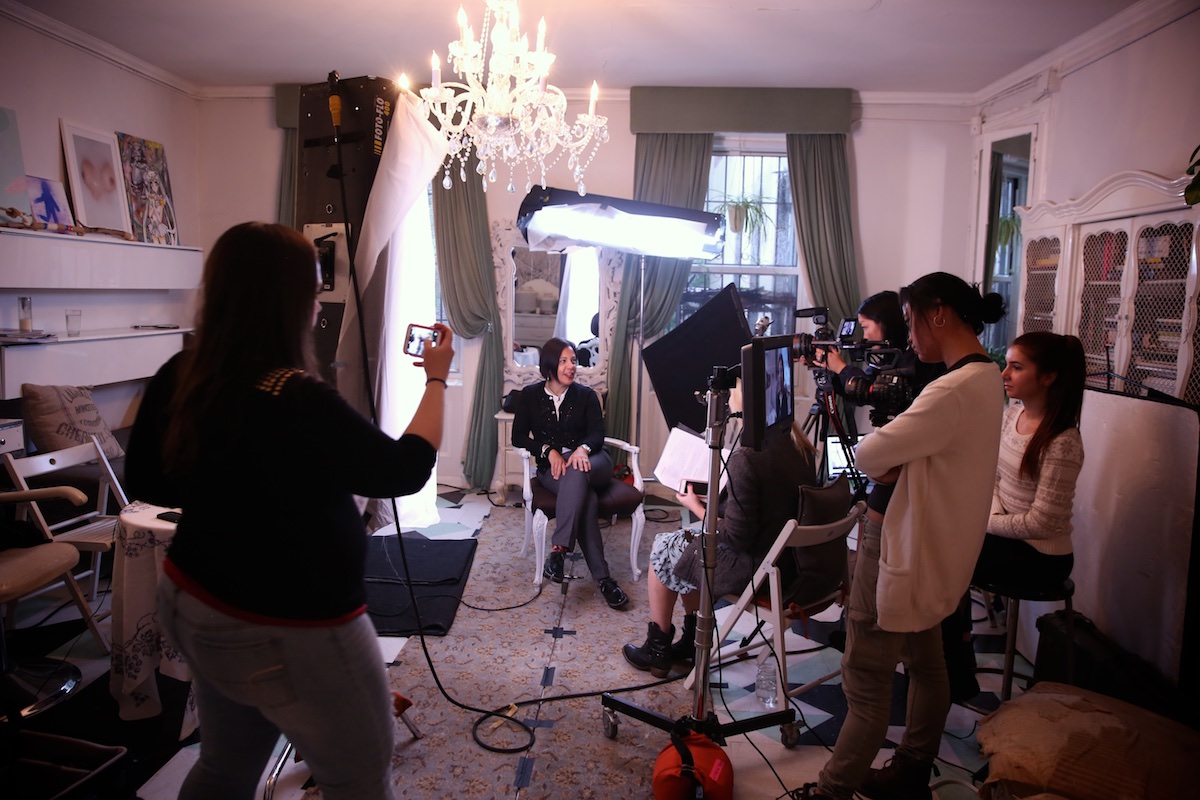 Erin and the crew interviewing Joannae Wilson of Gotham Gal. 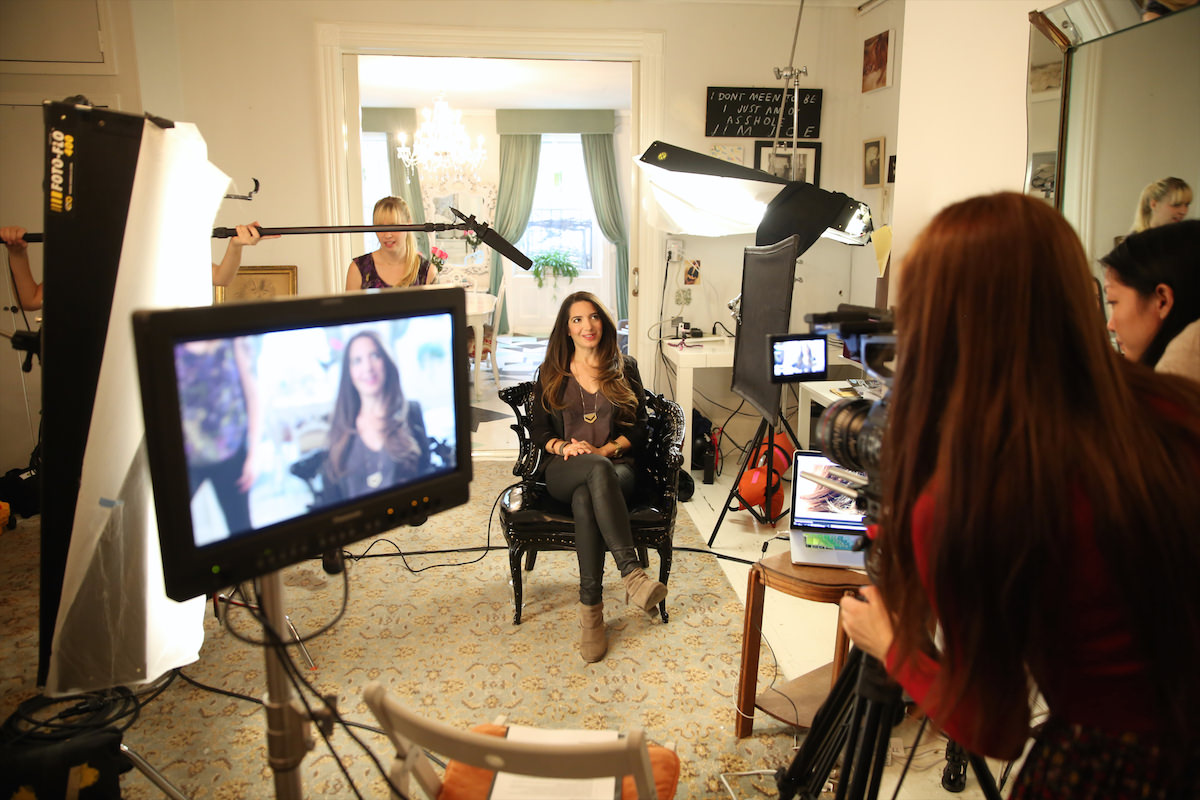 The decision to use an all female crew seems obvious and brilliant in retrospect. Was that always going to be the case?

To be honest, the videographer and team I worked with on the Kickstarter campaign were women, and they were the only film crew I knew in New York City. When I began working on the feature, I hired two of them, and I didn’t realize the emotional impact it would have on set. Once I started interviewing women to be in the crew, I could feel it. So when we built out our full crew, I said, let’s build this out with all women, showcase these stories, and to be fair, this is not something I’m getting paid to do, this is my life, my passion, what I would consider my life’s work, so I wanted people on set with me who care a lot about these stories, too, and who are deeply, deeply invested. I was magnetized towards people who really care about these issues, so it made sense the crew would be women who had faced discrimantion. Once we started filming the entrepreneurs could feel it, too. It wasn't lost on our interview subjects the fact we were supporting women behind the screen as well as on screen.

The other really cool thing about the crew is that I had a certain itinerary and questions to get through, but then at the end of our interview, I’d open it up to the crew and they could ask questions, whether it was Shannon about investment, or Victoria had a question about passions—it gave the crew an incentive to pay attention, to listen, to be engaged, because we were getting free life lessons as well. 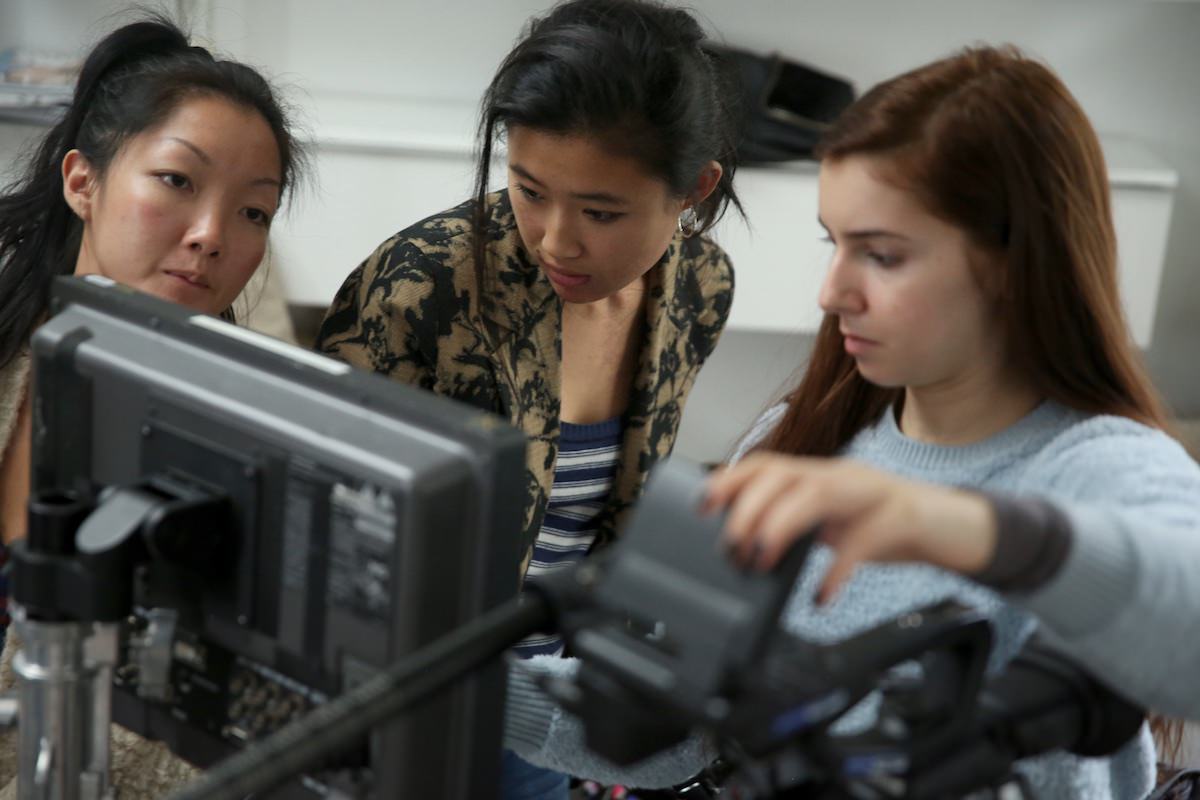 Victoria, Daisy and Mary—part of the all female crew.

Now that the film is finished, you're sharing it with people all over the world. How are you getting your message out there?

Our Kickstarter had a lot to do with the press we were able to magnetize. We had 2,000 people who put money behind the film, and those people have continued to be allies throughout the project. We got the attention of Oprah because one of our Kickstarter backers sent her our way, an dwe got to the White House because one of our backers worked for the National Women in Business Council. From my small idea to being on set to getting the trailer, as creators we need to find our tribe, our audience, so part of my marketing strategy was allowing people to be a part of this process. I want my audience to follow me throughout the next thrirty years of my career. I feel really thankful that they’re there and they’re listening.

How come you didn't seek a distribution deal?

The interesting thing is we completed the film, we did our premiere at the White House, then we were approached by distributors, but I felt such an intense bond to my audience, and I felt nervous about giving up the control and wondered what would happen to it, how people would see it, so I turned my production company into a distribution company, and our job for the last year has been about getting the film out to the audiences. Over the last year, we’ve done 240 screenings all throughout the world. We want to bring our people together so we can share this community experience. I’ve been able to pay my team and myself off of this, so people can watch the film by hosting these community screening events.

Interested in making films? Check out Erin's "A Gal's Guide to Making a Movie," with fresh installments published every Wednesday.