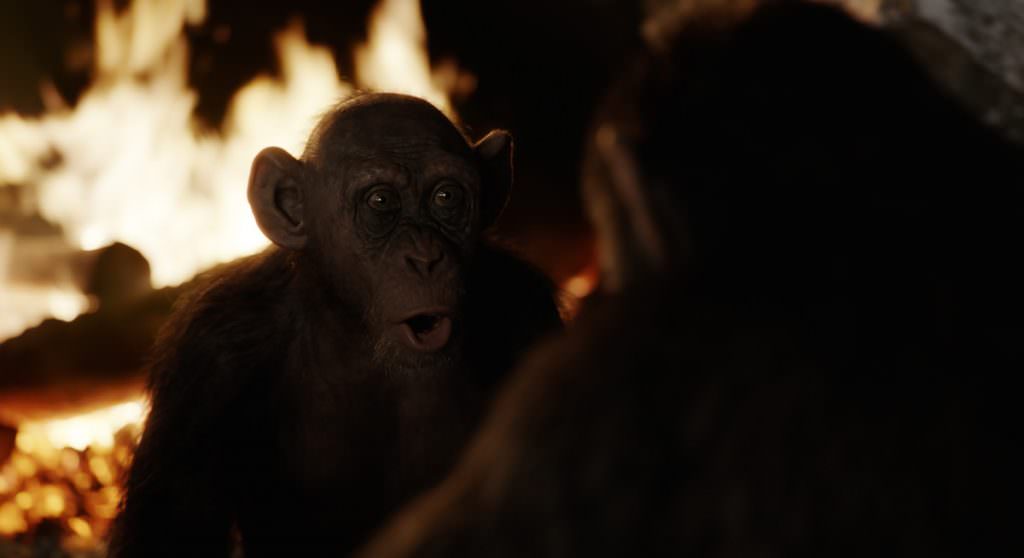 In this new clip from War for the Planet of the Apes, the performance capture technology that star Andy Serkis (he plays Caesar in the film) has helped usher in is shown in all its glory. The clip, titled "Meet Bad Ape," shows us the moment when Caesar meets this old, wizened ape he mistook for a human (Bad Ape wears clothes). Bad Ape is an escapee from a zoo, and represents the first new ape Caesar has met outside of his tribe in the entire trilogy, which makes finding Bad Ape a crucial moment in the war between humans and apes. The conversation between Bad Ape (played by Steve Zahn) and Caesar is a marvel of performance capture technology, for all intents and purposes a flawless meshing of the actor's performances and the apes we see on screen speaking. Because War takes place years after the apes have begun to speak, the conversation between Caesar and Bad Ape is detailed and deep, making the spectacle of apes speaking even more mind-blowing.

We have come a long way in a few short years with performance-capture, from Serkis's breakthrough performance as Gollum in Peter Jackson's The Lord of the Rings trilogy to what you saw above. There's plenty of good reasons to go see Matt Reeves final film in this new Apes trilogy (somewhat quietly, it's been one of the strongest reboots of the new century), but if you're in solely for the thrill of seeing how far we've come with performance capture technology, you won't be disappointed.

Here's the film's synopsis: Caesar (Andy Serkis) and his apes are forced into a deadly conflict with an army of humans led by a ruthless colonel (Woody Harrelson). After the apes suffer unimaginable losses, Caesar wrestles with his darker instincts and begins his own mythic quest to avenge his kind. As the journey finally brings them face to face, Caesar and the colonel are pitted against each other in an epic battle that will determine the fate of both of their species and the future of the planet.

War for the Planet of the Apes hits theaters on July 14.

Featured image: Steve Zahn as Bad Ape in Twentieth Century Fox’s "War for the Planet of the Apes."