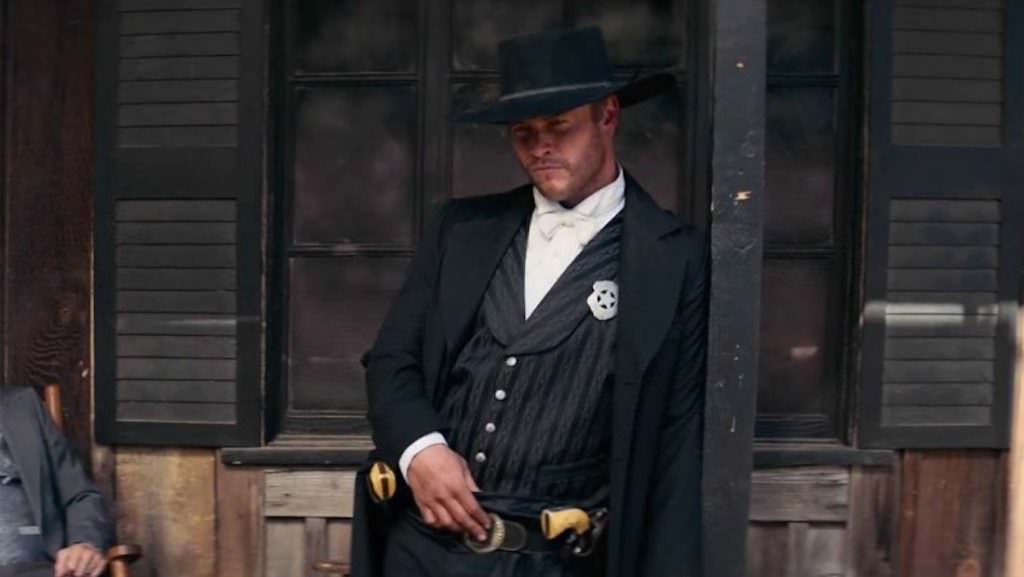 Luke Hemsworth’s younger brothers Chris (Thor) and Liam (The Hunger Games) are known for blockbusters, and now Luke Hemsworth (Westworld) is making a name in some smaller projects. His latest is the title role in Hickok, a western about the legendary gunslinger, co-starring Kris Kristofferson and Trace Atkins. In an interview, Hemsworth explained why Wild Bill Hickok wears his gun handles facing toward the back and shared the show business advice he got from an Oscar-winning legend. The film is out on July 7.

It’s really a matter of personal preference.  One reason for having the butt facing forward was that on horseback it's much easier to draw across your body if the gun is facing towards your belly button. There was two ways of being in a gunfight back then. There's one where you stand straight on and you draw from your right hand right side. Or, you make yourself a smaller target and you turn side on. Your right hand will draw much quicker from the left side. That was the reasoning. Hickok wore his guns all which ways and one of his favorites was to wear one one way and one the other way, so both ways at once. We just played around and I found it comfortable and fun to wear them that way.

Did you know how to draw quickly before?

I knew from being a kid and playing with cowboy cap guns. I always had a holster and a cowboy gun so I thought I had a little bit of skill. But we had a great weapon guy on set and it was every moment of the day there at my hip and I was pulling them out and twirling them and putting them back again so that I could do all my gun stunts.

Did you do much research on the historical character of Wild Bill Hickok or were you just staying within the corners of the script?

Both. There's a lot of material about Wild Bill, there's a lot of innuendo, a lot of myth. They say may have killed a hundred men. So it's hard to find what's true and what's not. So around that wonderful material out there you create your own little story, and then ultimately the drive comes from the script.  It was important to me to do something a little bit different from what people have seen before, to find an angle as to what drove this guy to go from town to town, how hard it is to kill people and keep killing people. A lot of very dark interesting questions there that were fun to explore.

One of the things that I like the best about the film is that he's a much more complex and authentic character than you normally see, not just a good guy or bad guy.

Yeah that was exactly what we hoped. How do we make this guy human? What drives someone to live this life, to be able to exist in this time? He was a criminal and a lawman. He reportedly was a spy as well for both the Union army and then the Confederate army. He had to be likable but he also had to be quite fearsome.

You and your brothers grew up in Australia, where the outback experience has some parallels to the American cowboys. Did that influence you? Did you watch American westerns as a kid?

Our western culture is a little bit different. We had what we call the bushrangers, guys like Ned Kelly, who was probably the most famous. I dressed up as a kid with his metal helmet on my head and I always had a little cap gun and a holster at my hip. I watched “The Lone Ranger” and you know a lot of the old classic American stuff and Sergio Leone’s spaghetti westerns. Growing up where I grew up where it's very harsh, it’s a similar kind of environment in a lot of ways. I think that's why westerns resonated with me.

When did you decide that you wanted to act?

I think it was high school where I started to really enjoy it. I always loved films and my mum and dad made a big effort to make sure that we were well versed in all sorts of amazing films as kids. And so it was always there.  In high school I started to take more notice of it, probably because I love getting up and doing stuff. I hated sitting down in a classroom. I just love how in drama you're able to get up and move around in class and be funny and people welcome this class clown, so that was great.  Drama class in this wonderful space in which that stupidity and insanity was embraced.  I took a year off after high school and did some work and then got into the Contemporary Arts program at Deakin University which married two of my great loves, drama and studio art.

What's the best advice you ever got about acting?

Sir Anthony Hopkins and I were talking about doing publicity. I was really rallying against the idea having a publicist. He said, “Why wouldn’t you do it?” I thought, “If this guy's telling me just to do it then maybe I should just do it,” and I actually had a lot of fun, so thank you, Tony.

I really enjoyed seeing country singer Trace Adkins in the film and I loved his deep, deep voice.  What was it like to work with him?

He was great. He's got the most intimidating, incredible voice I've ever heard. I’d stand next to him and he does this rumble that seems to come from deep in his stomach, and we're just probably about to roll and I'm like, “What is that sound? Is it coming from human?” We all sound like high-pitched girls next to him. Whenever he spoke we all kind of dropped into a lower register just from being around him.