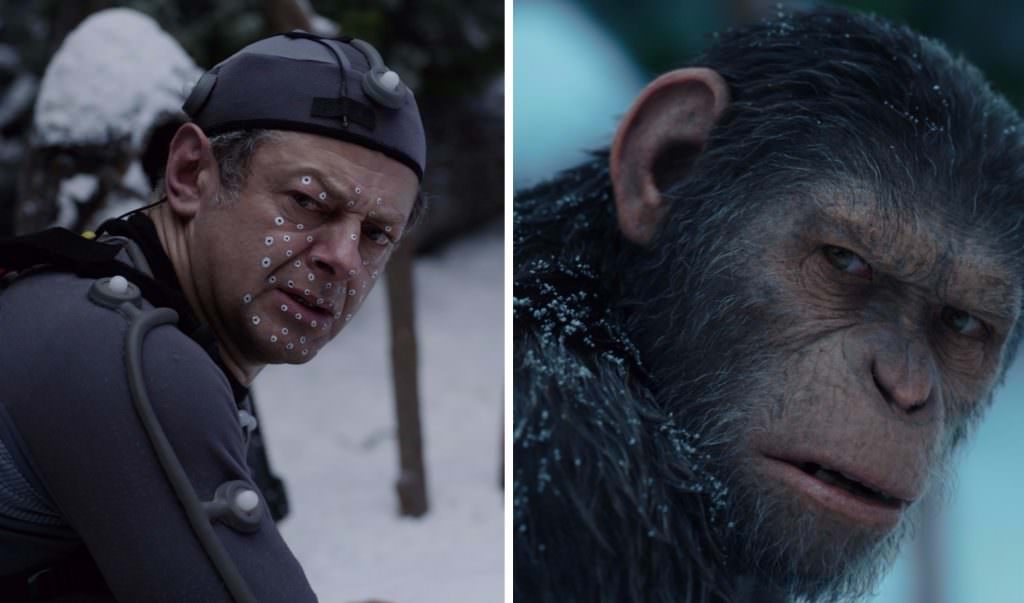 We've written about how the performance capture technology that Andy Serkis has helped create and Weta Digital has perfected made the Planet of the Apes reboot one of the most satisfying, compelling franchise remakes of the century. Serkis plays Caesar, the new trilogy's heart and soul—a chimpanzee that has become vastly more intelligent, and verbal, after he's exposed to an experimental drug meant to battle Alzheimer's disease in-utero in 2011's Rise of the Planet of the Apes. This was the first and most crucial way in which the new trilogy differed from the Charlton Heston-led original, in which Heston's human astronaut was the hero and the apes were, more or less, the villians. But in order to pull this off—apes slowly but steadily learning how to speak—Serkis and his fellow actors played their parts in mo-cap suits (motion capture), which mapped their every movement, especially their facial expressions, so that Weta could marry their performances onto the CGI-created apes they were playing. The results have been astonishing, and have only grown more sophisticated as the number of apes, and their abilities with language, have increased with each new installment in the franchise.

The new trilogy has set an extremely high bar for all future films that have non-humans doing human-like things. Beginning with Rupert Wyatt's Rise of the Planet of the Apes and continuing with Matt Reeves' Dawn of the Planet of the Apes and his upcoming War for the Planet of the Apes, we are witnessing a creative achievement that may only be fully appreciated when an actor like Serkis (hopefully Serkis himself) wins a Golden Globe or an Oscar for a mo-cap performance. In this new featurette, 20th Century Fox celebrates the work that Serkis and his fellow mo-cap performers have been doing for the last decade and more (keep in mind, Serkis played Gollum in The Lord of the Rings, another mo-cap performance), as well as the work that Weta performs in post production, to create Caesar and his army of apes. The performances, despite the technological wizardy, are deeply emotional and personal, like all great acting, while the CGI is brilliant not just for the obvious accomplisment of making talking apes look utterly natural, but for the subtle, invisible things that allow the viewer to lose themselves in the film.

War for the Planet of the Apes, the last film in the new trilogy and a must-see, premieres on July 14.

Featured image: Andy Serkis on the set of Twentieth Century Fox’s "War for the Planet of the Apes." Courtesy 20th Century Fox.