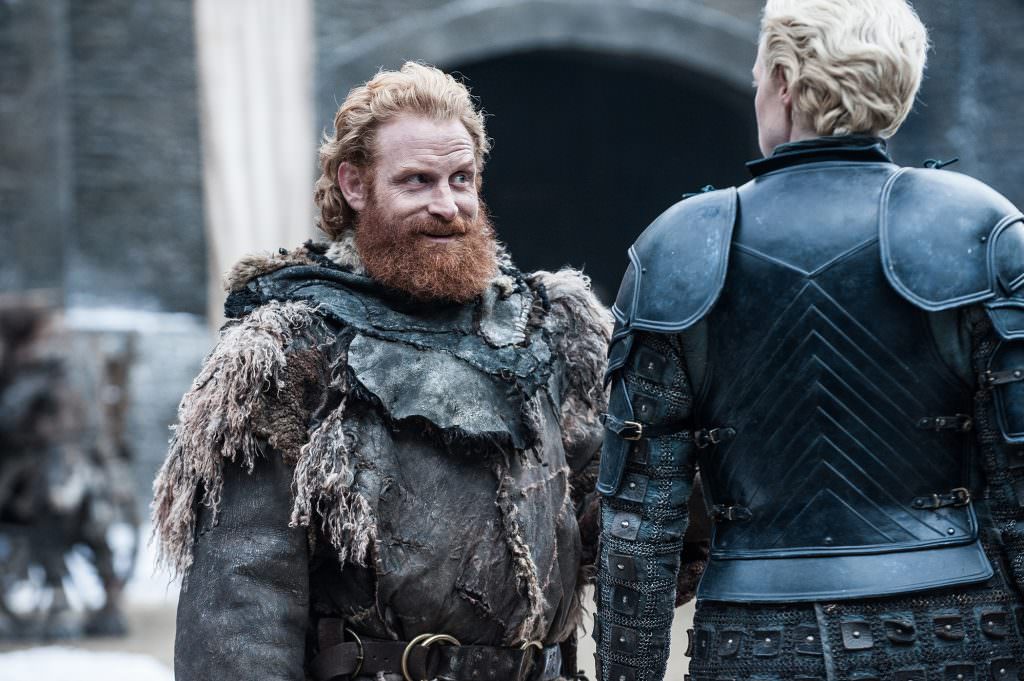 The Hottest New Romance on Game of Thrones was Improvised

Earlier today, we shared this story about Game of Thrones showruners David Benioff and D.B. Weiss discussing the breakneck tempo (including two huge battles) that will make season seven special. In their interview with Entertainment Weekly, Benioff and Weiss also discussed another hot topic; the burgeoning love affair (we hope) between the Wilding Tormund Giantsbane (Kristoffer Hivju) and Brienne of Tarth (Gwendoline Christie) that was ignited last season. It began with a look that Tormund gave Brienne when she arrived at Castle Black in episode four. You'll see it at the 0:21 second mark here:

While everything on Game of Thrones is intensely plotted, planned and choreographed, the show is still populated by great actors like Hivju and Christie, which means that some of your favorite moments, like the above, might have been improvised. In fact, that's exactly what happened in this case, as Benioff told EW. It was all Hivju taking a bit of fairly bland stage direction and turning it into a moment where a man gazes upon a woman in awe:

“It’s great because there was no dialogue written for that, or major stage direction, there was just a line like, ‘He stares at Brienne because he’s never seen a woman like that before.’ And then we let the actors do what they do,” Benioff told EW.

As the season progressed, Tormund and Brienne had more time together, and the two actors played up Hivju's initial reaction.. So far, it seems pretty one-sided, with Tormund clearly liking Brienne without much in return, like the deathless moment where he smiles at her (pictured above) during "Battle of the Bastards." This was another moment that wasn't in the script, Weiss said:

“It’s not something you could ever write,” Weiss said. “I saw it 150 times and every time it made me laugh; it’s purely the two of them.”

“First of all, Kristofer is absolutely hilarious. I don’t think I’ve been in a scene on Game of Thrones when it’s been everything I can do to stop myself from laughing. The way he was behaving toward me was just extraordinary. I enjoyed Brienne being put in that position of feeling awkward and not wanting the attention,” she says. “That was a very fun thing to play. He’s a wildling, he’s very sensual and animal-like and very forthright with his emotions and feelings — which is really the opposite of [Brienne]. I enjoyed trying to navigate that and the beauty of her embarrassment. She can totally deal with the situation, and with him, but she’s just so embarrassed about it.”

Before you get too excited about a Tormund/Brienne love affair in season seven, let Benioff crush your hopes:

“We need to kill one of them now because there can’t be a happy ending or any romantic connection on the show. But we’re not going to tell you which one."

We'll get to see how this potential romance shakes out when Game of Thrones returns on July 16.