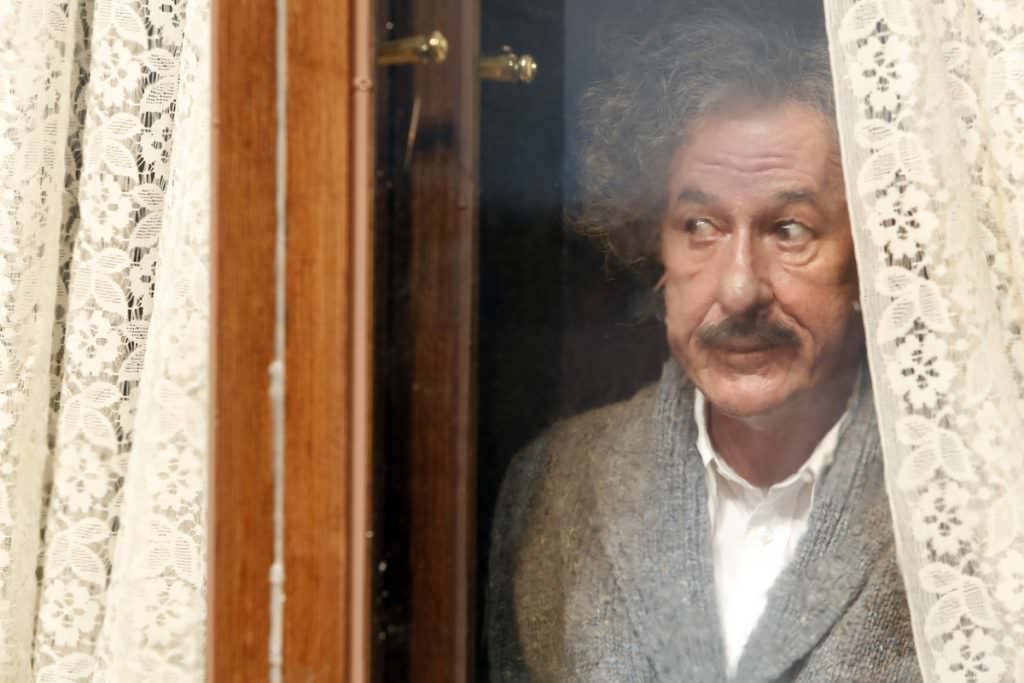 Genius marks National Geographic’s first foray into scripted drama. The series, which is based on Walter Isaacson’s book Einstein: His Life and Universe and executive produced by Ron Howard and Brian Grazer, charts the rise of the disruptive physicist who changed the way we understand the universe. We chat to Fae Hammond (hair) and Davina Lamont (make-up) about the process of transforming stars Geoffrey Rush and Johnny Flynn into the wild-haired genius at the different stages of his life. 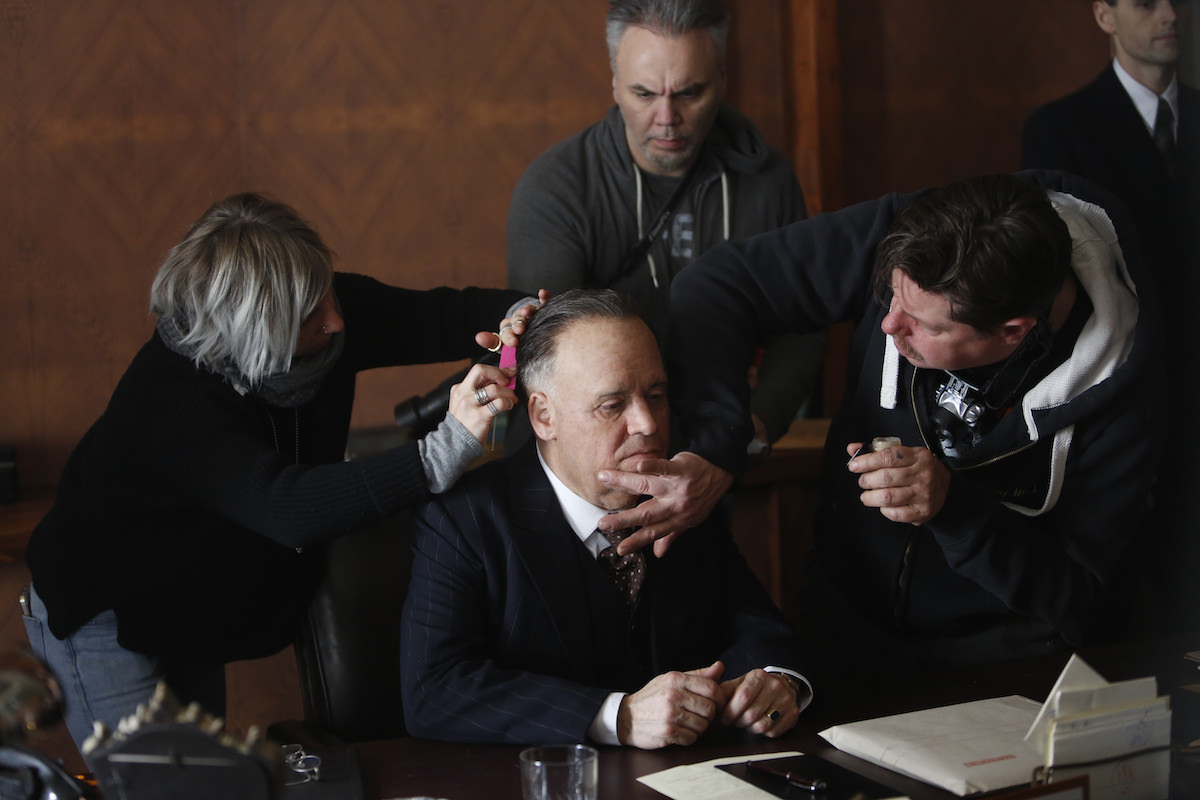 How deeply did you research the real Albert Einstein to create the looks for Johnny Flynn and Geoffrey Rush?

Fae: There are so many images of this amazing man and I'd spend an hour a day way before official prep began in a quest to find unusual images, it's easy to become obsessed!

Davina: I pulled a fair bit of research from Einstein’s early years to his death from the internet and also from Walter’s novel. We didn’t have all the scripts when we started shooting so I wasn’t completely sure what years we would be shooting in so I needed to have everything I could pull from.

How did you develop Rush’s look?

Fae: GR was very keen to start as early as possible enabling our wig maker Alex Rouse to find the most important element of his look; that hair quality which everyone knows means Einstein. It can take some weeks to get the right qualities and we wanted to find the natural curl and wildness which changed color and texture as the years went by. We had six weeks to build the six hairpieces, wigs and toupees.

Davina: Rush had grown his hair and was a great color for his forties look, so we used different wigs to show his younger years through to his death. Along with his wigs I needed to show age with his facial hair and eyebrows, so I had many pieces made for him. I also had some forehead and cheek prosthetics made up for him- for his late 50s to his death in 1955.

What was the process of transforming Rush into Einstein?

Davina: When we first see Rush, he’s at his youngest age, so he has a full wig, moustache, facial lifts, contact lenses. As he gets older the lifts go, the gray facial hair and wigs come in. Then for the older looks he goes into white hair, moustache and prosthetics. The best part was the contact lenses and moustache. Once Rush was in costume he completely transforms into Einstein.

How long did it take to give him his Einstein hair and make-up on set each day?

Fae: As GR is in so much of the story we tried to make the call as swift as possible, wigs were toupees that sat simply on top of his own full head of hair, so they were lightweight and easy to change for the quick changes of era throughout the shooting day.

Davina: His early years we got it to 30 minutes and as Rush ages it would take anywhere from 45 mins to and hour and 45 minutes.

How did his look evolve throughout the course of the show?

Fae: We followed the key eras of his life, keeping as close to the images we all know but equally making sure GR never felt overwhelmed with the make-up and hair; it was really 80 per cent GR and 20 per cent Einstein.

Davina: In the 1920s he has more of a darker wig with light gray, some in facial hair and eyebrows. Still keeping more of a tight curl in his hair. In the 1930s we added a touch more gray in his wig, showing more wildness to his hair. The 1940s were his halo years: where the hair was grayer and a lot more wild and free. In the 1950s he has his white hair, shorter, still wild and free, but a lot shorter for his oldest looks. 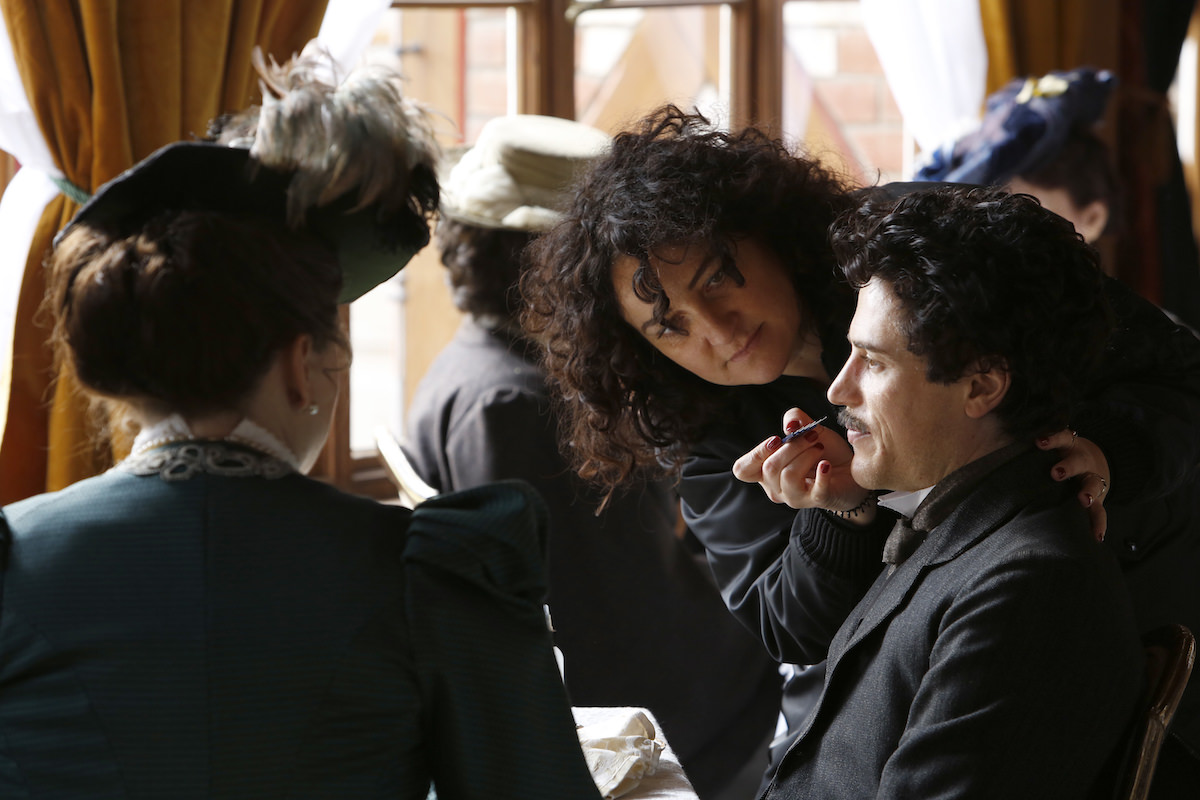 Davina Lamont on the set of Genius. Courtesy National Geographic.

How did you draw parallels between Flynn’s younger Einstein and Rush’s Einstein? Especially as Flynn is normally a blue-eyed blonde.

Fae: Difficult! When I first met JF, the surfing locks, golden skin and lovely blue eyes, it was a concern. Luckily not many people had any idea of what young Einstein looked like so that helped, but once JF was dyed dark brown, brows and dark lenses the look began to materialize.

Davina: Actually, both Rush and Flynn are blue-eyed men, so they both wore contact lenses in the show. I wanted to push Flynn as old as I could without making him look comical, as he goes from a young 16-year-old to 34 before Rush took over and I think we succeeded in doing that.

How important is hair and make-up in helping an actor slip into a role? Do they get much input into the process?

Fae: Vital – the actor is very much part of the process. They really need to feel right, as it helps them prepare. It's very exciting starting the journey when an actor realizes anything can be done, however I am always happy to go with less is more; it's about elements of a character. It's a joy to work so closely, great to share ideas and be very open.

Davina: Absolutely all actors have a say in their look. I like to always communicate with them before they arrive, so they know what I'm doing. On Genius we had to age everyone, so we needed a lot of wigs, facial and aging prosthetics to help. I had to make a lot of generic prosthetics, so I could put on many different faces throughout the show. All the actors were great and allowed me to do whatever I needed to get them into character. It was great fun.

What were the main considerations in styling the cast for the different time periods?

Fae: Speed was important as we were working with a tight schedule; important make up changes could not take hours, so timing was important in creating looks.

Can you talk me through how you approached each era?

Fae: We followed the excellent images, adding different color toupees to add the years, but this is more of a Davina question, as she followed through with all the characters most closely.

Facial hair was big so nearly every man would have facial hair. As we hit the 1920 sand 30s we could add more make-up to their looks, the hair could be shorter, facial hair would be thinner or nothing at all. There was a lot of research, not only in era, but also the amount of 'real' characters we had to create throughout the show. Each person who came into Einstein's life, we needed to make as much like the real person as we could. You don't ever get this type of job, not only going through the eras but also having a Fritz Haber, Lenard, Edgar Hoover, Roosevelt, Hitler, Mileva Maric, Marie Curie, all together in one series. Pretty lucky in my world to have the opportunity.

What was the biggest challenge you faced?

Fae: Making GR younger than his years, it's always a challenge.

Davina: Probably the amount of aging. As I mentioned above we had to age nearly every character, so the amount of facial hair being made daily, to making gray and white hair pieces to sew into wigs to create age. Then large quantities of prosthetics being made and run in my bus daily to keep up with the large cast coming through our buses.

The other biggest challenge would be Fritz Haber in a full silicon bald head for 25 days. It's extremely difficult to make a prosthetic bald head look real and I'm happy to say prosthetics supervisor Goran [Lundstrom] and my team did an amazing job through the series to fool a lot of crew into thinking he actually shaved his head daily.

What was the most satisfying part of the job?

Davina: Being able to successfully create a character that the director and producers imagined and satisfy what the audience preconceived ideas of the characters should look like is a pretty good part of any job.

Fae: I am doing the second film of Fantastic Beasts and Where to Find Them, written by JK Rowling and shooting in the UK at the Warner Brothers studios.

Davina: Working on a horror with the Blumhouse productions in the islands of Fiji. Pretty lucky lady.