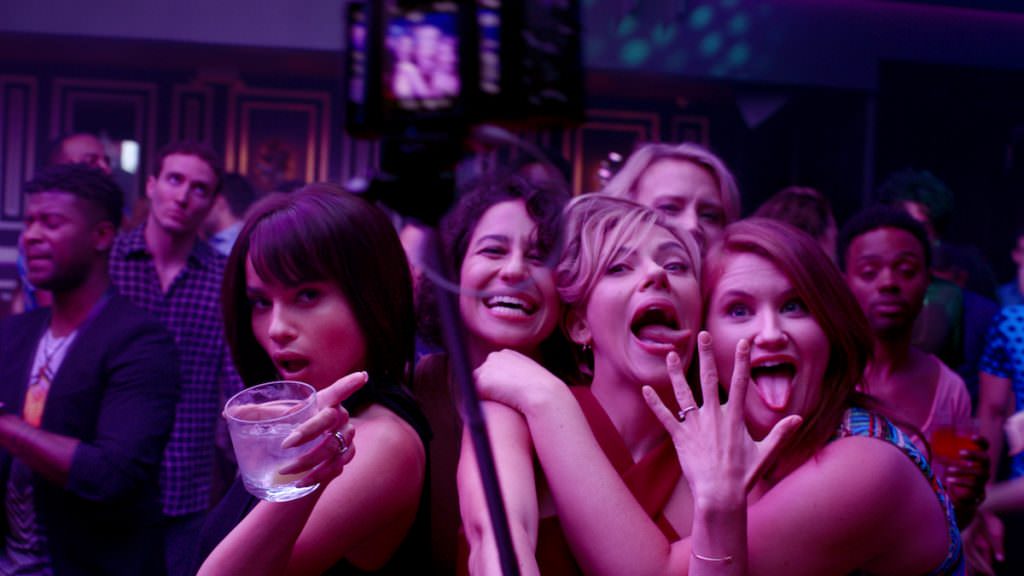 A party weekend in Miami, a dead stripper, cocaine. A friend group’s freewheeling members forcing their uptight pals to just chill out (and take the coke, already). Sounds like another zany, Apatow-orchestred bachelor party ready to go all kinds of wrong. Right? Make it a bachelorette and replace Judd with director Lucia Aniello (of web series to Comedy Central mainstay Broad City), and we’ve got the second woman-led caper of the summer, Rough Night. The first, of course, is Wonder Woman, which thanks to expectation-smashing box office returns, glowing reviews, and an exceptionally good-looking and talented lead, Gal Gadot, has set a new bar for quality superhero summer blockbusters. In its own space, does Rought Night rewrite what to ask for from the black comedy subcategory of night-out-gone-wrong? Nah, but it’s a welcome addition to the recent advent of girl buddy films in the genre, as well as to the class overall, which could use more Rough Nights and fewer Hangovers (but couldn’t we all! We’ll take our award and go home now).

Rough Night sees a group of four old college friends, whose distinctly free-spirited, needy, or politics-ready personalities don’t quite mesh together any longer, head to Miami to celebrate Jess’s (Scarlett Johansson) bachelorette before her wedding to uptight, jealousy-driven Peter (Paul W. Downs, who co-wrote the script with Aniello). As bad luck would have it, the foursome — who become five with the addition of wannabe singer-songwriter and indefatigable drunk Australian Pippa (Kate McKinnon) — have to get it together as a group, and fast, after death accidentally befalls their token stripper.

With Zoë Kravitz as (comparably) grown-up Blair, Ilana Glazer as Frankie, a spoiled activist, and Jillian Bell playing Alice, the mom who still has all her issues leftover from sorority days (and yet manages, often, to be the gang’s funniest character) Rough Night completes and definitely enhances an incidental trinity of recent black comedies set in bachelorette hell. First, and loudest, was Paul Feig’s Bridesmaids, which came out in 2011 featuring a cast of SNL favorites plus Melissa McCarthy as a mesmerizing, unhinged terror.

It was a critical and box office success, but if that film’s scatalogical humor galore just wasn’t for you, Bachelorette premiered a year later, a more off-the-wall riff on the same theme (disproportionate to the laughs, it made a mere fraction of Bridesmaid’s profits). Leslye Headland’s work stars Kirsten Dunst as an uptight queen bee type trying to corral two chaotic friends (Isla Fisher and Lizzy Caplan) and her own resentment through a single night before the wedding of their high school best friend (Rebel Wilson), but cocaine, hijinks, arrested development, and aggravating groomsmen keep getting in the way. Five years later, the movie, which Headland adapted from her eponymous play, is generally considered overooked — and it would hardly be a bad thing if Rough Night’s release sparked an early revival, for audiences who just can’t get enough of flawed, funny, well-meaning if coke-addled ladies trying to pick up the pieces before dawn.

Whether it’s desperate bridesmaids trying to get their supposed best friend’s halved wedding dress sewn back together in time for her nuptials several hours away (Bachelorette) or the whole group, including the bride-to-be, determining whether moving a corpse is or is not going to get them jail time for manslaughter (Rough Night, and yes, probably) it’s a kick getting more of these lady-led rated R buddy capers in theaters not to rival, but to hang with the all boys who have been careening through the genre for decades. Aniello is the first woman to direct an R-rated studio comedy in almost 20 years. Tamra Davis made the last one, Half Baked, a movie that has never lost its place as an evergreen stoner cult classic. Now, with what looks like the ascendancy of chaotic-women-escapades, maybe it won’t take another two decades for the next female director’s edgy romp.