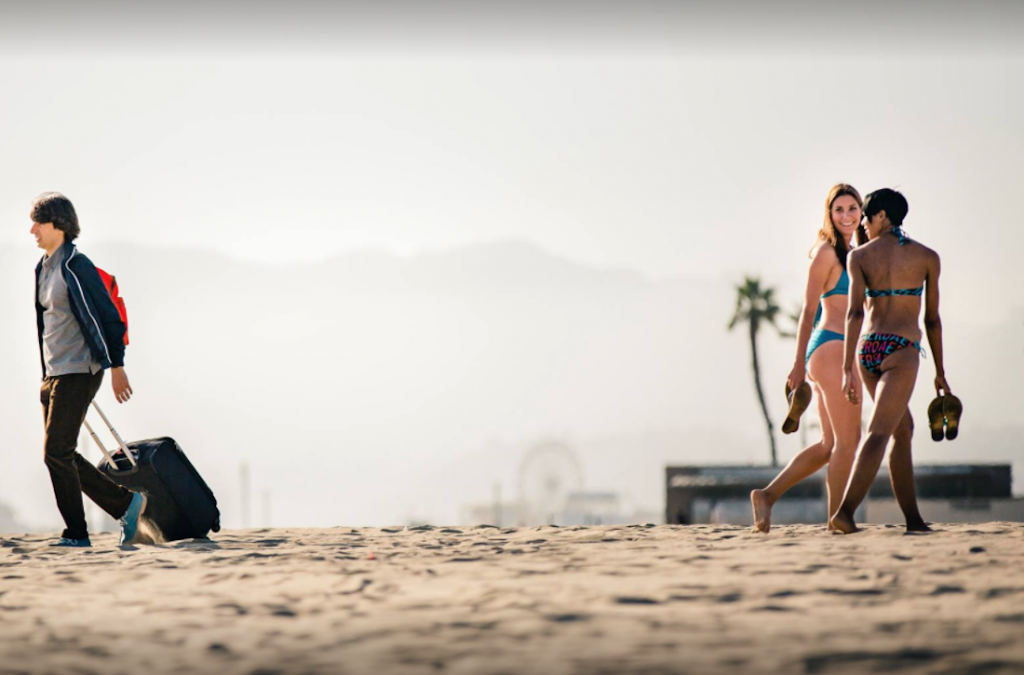 In part I of our interview with the comedian-turned-filmmaker, Demetri Martin explained how he came to make his first semi-autobiographical feature, Dean. The second part begins with Martin’s discussion of the way he incorporated aspects of his own experiences into supporting characters in his script.

"They're not based on anybody, and the story didn't happen to me. My mom sold our house years ago. I was happy about that. I was sad we were losing our house, but she needed a fresh start. There was no realtor like in the movie. But, if I think about it, there are a couple of things I took from myself and put into other people. In my real life, I didn't try to escape grief, and I didn't run away. As the oldest of three children, I was there for my mom. I was there almost every day for quite some time. She leaned on me a lot, because she had me when she was 21. So I was her son, but there wasn't a huge gap between our ages…

"I wouldn't say I was as logical as Kevin's character, but I thought there was something I could do to maybe get over things faster. I found that there wasn't. It just takes the time that it takes. But I liked putting that into Kevin."

"And then there's Reid Scott's character. He's Dean's best friend, which is not a huge role, but to me it's really important. In the third act, when he was the conversation with Dean, I put into his character some things that I've said to friends. Because I was the guy who lost his dad in college. I got to have somebody telling characters things that I'd tell to people who were dealing with grief. He said things that were very true for me."

One of the film's themes is the difference between New York and L.A. You said something interesting: that New York is better for daydreaming.

Did I say that? Yeah, for me it is. It's such a great walking city. I spent a lot of time walking around New York when I lived there. And you can hop on the train and go to this neighborhood, go to this cafe. Or Central Park. I love the museums. I used to go to the Met all the time, especially when it was cold out and I could walk around inside for hours.

When I first moved to L.A., we lived in Santa Monica. So I could walk around the beach, or along the bike path. You can, of course, daydream anywhere. But in New York, my walks were populated with so many characters. Such diversity. I felt like there was a lot of input that went right into my material.

Doing standup, you're used to getting immediate feedback. How is it different to work in something that people aren't going to react to for months, or more than a year?

Definitely different. I thought it would be. I was trying to make something in a vacuum. There was a lot of uncertainty, and it feels kind of mysterious. We did little screenings, when I had a first or second cut of the movie, for about 25 or 30 people. Just watching it with someone else was really helpful. But it's really different from standup, and it's been quite a long process.

It's weird, because I can't change it. Now it's done. In standup, you can adjust, right in the moment. It's a different feeling.

Were there things that worked differently than you expected when you watched it with others?

Yeah. I lost perspective, as you can imagine. Once we were editing for a while, there were things that changed. I had something that worked, and then it didn't work. I thought it was funny. I showed it to a couple audiences, and it worked. And then the next time, it didn't. What the hell happened?

It's in the wedding scene, when I'm at the altar, and I see my ex. As I conceived it, it was a silent film. Somewhere along the way, something happened where there was an audio track of a priest talking, and it was just turned back on or something. And it totally killed the comedy. I couldn't figure it out for a while. And then I realized, "Oh, you have to mute that.”

I understand you're become friendly with Albert Brooks. Did he offer any advice on how to make a movie?

He was really nice. We're from different generations, and he's Albert Brooks and I'm me, so it's not like we're going to be buddies. I try not to bother him. I try not to be a fan, and be respectful of his space and his time. But he's been really kind to me, and every now and again he'll tell me something about one of his movies. When he saw I was making this movie, I asked him for advice, and he said, "When you decided to make this for your first movie, I thought this was a good idea. Because you have to introduce the film audience to you and your sensibility." You should try to do that with a real story, rather than in outer space or some different world.

That's the difference between being a lone person on stage and having an ensemble.

Yeah. It's one of the things that's very appealing to me about making films. To learn how to write for other people, and to get that chemistry. To be part of something that's greater than myself. Stories that, hopefully, move people.

The process of it is fun. too. To get to have colleagues. I get to have lunch with people! Rather than being a drifter in some weird town. I don't talk to anybody all day, do my standup that night and then back to the rental car, back to the airport. I mean, it's fine. I get a check, and I have freedom. But it was a pleasure to hang out with people, and then see them at the premiere. You make new friends, and it's great. A lot of work to make those friends, but that's OK.