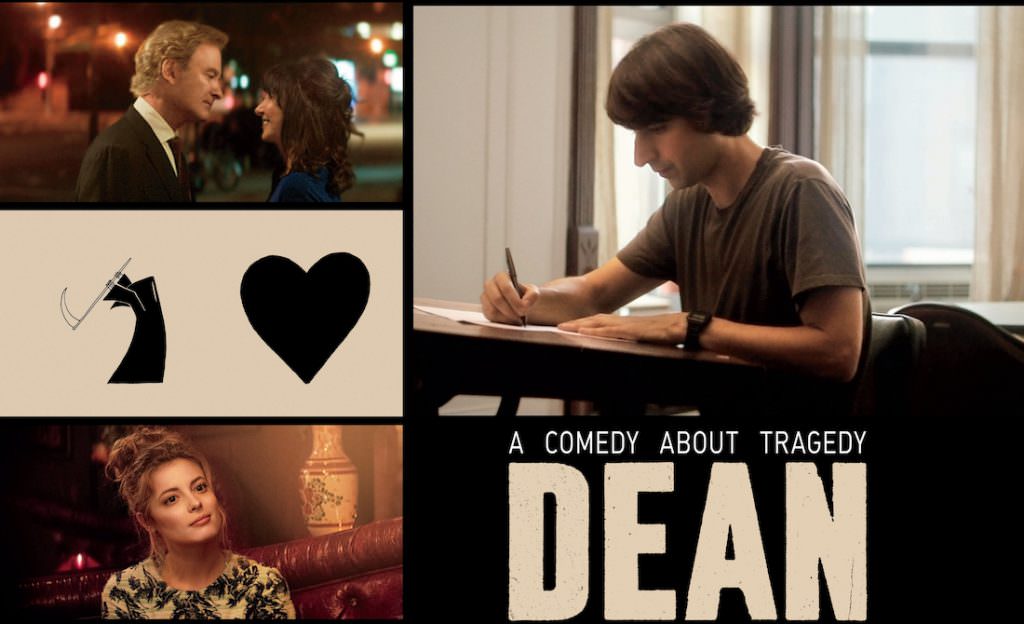 Although best known from TV, beginning with The Daily Show in 2005, actor-comedian Demetri Martin has acted in such movies as Contagion, Taking Woodstock, and In A World…. Now he adds a few more hyphens to his resume as the writer-director-star of Dean, a comedy about a New York-based illustrator who flees to Los Angeles after his mother dies. While Dean is away, his father (played by Kevin Kline) announces that he's going to sell the family home, and begins a romance with the realtor (Mary Steenburgen). Across the country, Dean falls for a woman played by Gillian Jacobs.

The movie, which opens June 2, is semi-autobiographical. But in actuality it was Martin's father (whose name was Dean) who died when the filmmaker was relatively young. Martin talked to The Credits while he was in Washington for a performance in which he was polishing material for his next standup comedy special, which he'll shoot in December. The New Jersey native began the interview, which has been edited for length and clarity, by discussing how he started to think about moving from live performer to movie director.

"It was something that started to percolate and eventually crystallized over time. I got into standup just to do standup. I hoped I would make a living doing it. My dream was, if I could make money from doing jokes, that would be amazing. I started in '97. By 2005, I sold my first script, to Dreamworks. Never got made into a movie, but….

Not long after starting, probably a couple years into it, I began to get movie ideas. And as a Woody Allen and Albert Brooks fan, I saw two examples, at least, of people who had done standup and developed a voice and a sensibility, and successfully told stories on screen. It felt like it was possible. Of course, it would be very difficult. But I thought it was worth pursuing."

What's the comic or narrative advantage of including drawings in your act, and now your filmmaking?

At first, it was appealing to me just as an experiment. I wanted to see if I could get drawings to work. In standup, it's maybe a clumsy marriage, but I still felt like there was an opportunity to get some extra punchlines. And to diversify my presentation, especially in longer shows, when I started headlining. If I was doing 75 to 80 minutes, rather than just reciting jokes, I could have almost different scenes. If I did a little bit with drawings, if I played guitar a little bit, maybe told a story, it would break up the narrative so there was some sort of arc to the show.

When it came time to make my first film, I thought, I do draw all the time. It is a big part of my life, and my creative process. If I make the character an illustrator, I can use some of that real estate on screen for drawings. If it works, I'll have an opportunity to create a little more intimacy between the character and the audience. The audience is privy to that information, but no one is seeing those drawings as the movie is going. We're seeing them. But his dad's not seeing them. It gives the viewer a chance to see what's happening with him as the story unfolds.

It's visual, but it's also internal.

I think so. I made my character a bit more introverted than I am as a person. I'm somewhat introverted, but I'm a pretty verbal person. I feel like I can usually express what I'm feeling in words pretty well. But I thought an illustrator, like my character in the movie, might be someone who finds comfort more on the page, and works things out a little more privately.

Did you learn more from watching Woody Allen and Albert Brooks movies, or from what you observed when you were acting in film?

This is an interesting question for me. By the time I was in movies, I knew I wanted to try to make one. Or several, if I could. So, any set I was on, I paid attention to the choices that were being made. The different jobs. How the set was run. You know, what lenses are they using? How are they doing the coverage? To see the logistics, and how much is involved. I was trying to prepare myself for, hopefully, making films someday.

But deeper in my brain would be the Woody Allen and Albert Brooks stuff that I just liked as a fan. I was already a comedian at that point, because I hadn't seen any of those movies as a kid. As a kid, I loved Peter Sellers. And I still do. But that was something my dad shared with me. The Pink Panther movies, and eventually I saw Dr. Strangelove and Being There. I didn't know who Hal Ashby was, but I got into him later.

Did you learn anything about romantic comedy from being in the video for Fountains of Wayne's Someone to Love in 2007?

[laughs] I don't know if I did. But that was a cool experience. That was very early on for me. I learned how economical things have to be. I improvised all these things. I wasn't under any illusion that they would use everything I did. But when I saw the video, I remember thinking, "Oh, but I did this cool thing, and I did that." But then I realized, "Oh, wait a minute. What is this, two minutes long? They're not going to be able to use it all."

In part two of this interview, Martin discusses what he took from his own life story, and the advice he git from Albert Brooks.

The Best Skits From John Krasinski’s Debut on “SNL”