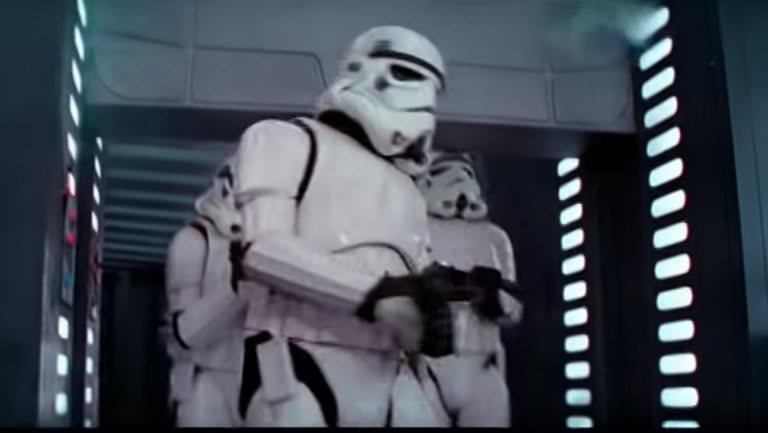 Of all the great pieces that were published yesterday to honor the 40th anniversary of Star Wars, we tip our hats to The Hollywood Reporter and writer Ryan Parker for the scoop of the day. One part of Star Wars lore involves a certain Stormtrooper hitting their head on a blast door as he and his comrades move about the Death Star looking for R2-D2 and C-3PO. This is the moment you're looking for:

Ever since then, for some 40 years, Star Wars fanatics have wondered why on Earth George Lucas and his creative team allowed that to make it to the final cut. Surely they had other takes they could have used. Surely they hadn't all missed the fact that in this heightened moment of the film, this goofball Stormtrooper bonked himself on the head. It was such an obvious, hilarious gaffe that its inclusion in the final cut seemed either deliberate or insane. How could this have happened!?!?

Well, THR's Ryan Parker tracked down the gentleman who played that Stroomtrooper, and he's got a story to tell. In fact, his story is so charming, so honest, it actually makes the blooper even better, and makes its inclusion wonderful. We suggest you read the full story, but for a quick snippet, see here:

"On the second day of filming, I developed an upset stomach. By midmorning I had paid three to four visits to the loo/bathroom. Having re-dressed myself and returned to the set, I felt the need to rush back to the gents' toilets, but I was placed in [the] shot. On about the fourth take, as I shuffled along, I felt my stomach rumbling, and "bang," I hit my head! As I wasn't moving too fast, it was more of a scuffed bash, so it didn't hurt, but as no one shouted "cut," I thought the shot wasn't wide enough for me to be in frame."