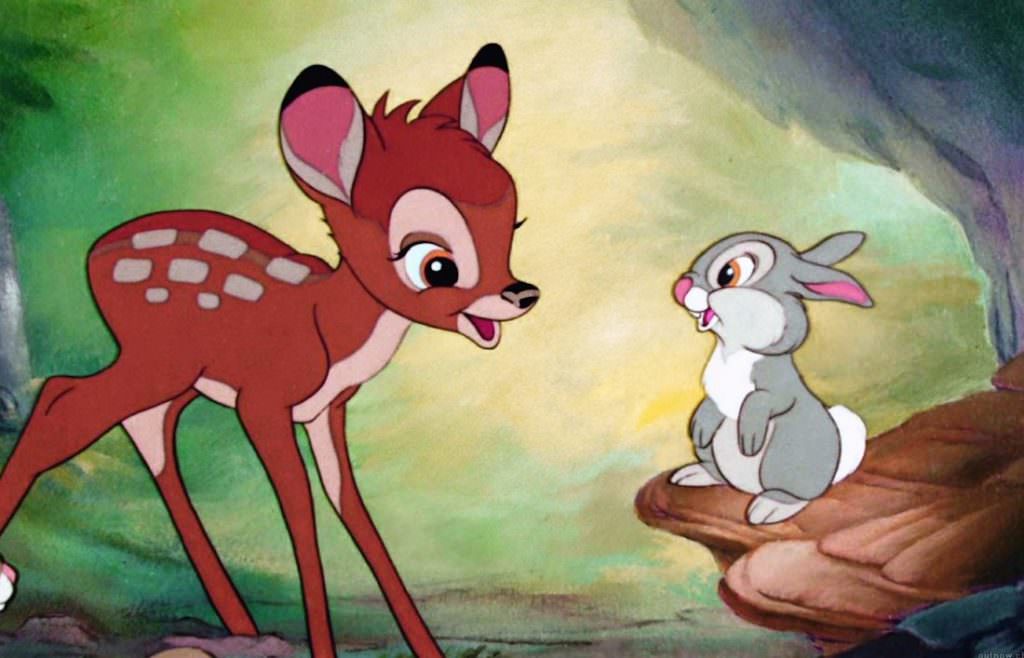 Disney’s 1942 classic Bambi featured two of the most memorable voices in animated movie history, both from very young children. The title character, a young deer, was voiced by Donnie Dunagan, already a veteran of seven movies at age seven, and Bambi’s friend Thumper was voiced by Peter Behn, a first-time performer who was only four years old when he started recording. The two boys recorded their performances separately and never met until a couple of years ago when they appeared together on an episode of The View.

In interviews, Dunagan and Behn spoke about their experiences in making the film and what has kept it so meaningful to them over the years.

Behn was so young that he does not remember much about the recording sessions. “I remember going into the sound studio with a sound director and he would read the lines with the inflection that they wanted and then I would repeat the lines back. I wasn’t a really heavy reader in those days.  The first time I saw it was at the premiere which was in 1942, and until then I didn’t really know exactly what the storyline was because the recordings were done individually and in segments.”  As for Thumper’s adorable bubbly laugh, “There was something that caused that laughter to come out. I was kind of a rambunctious kid and pretty vocal about various things so it probably wasn’t that difficult to get me to laugh.”

Behn remembers touring the animation studio to see some of the drawings the animators were working on. “The artists were hard at work,” Behn said, “I knew I was a little rabbit but I didn’t really know that much more in total about the movie until later when I saw it.”

Dunagan was originally invited to Disney Studios to be a face model for Bambi. “I’m in my home with my mother in Westwood, California and Mr. Disney called my mother personally on the kitchen phone and invited us to come up to be the facial model, not the voice, for a deer.  We did not know very much about Disney.  We had been with Universal and RKO on 6 or 7 films.  After four or five movies as a child and not being in school only to do, work, work, work, work, work, some of the movies were a bit boring for a kid. I mean I wanted to play with my puppy dog and ride a bicycle, right?  But this was different.  After he called, my mother made some phone calls around and found out more about it. I got excited. I could not wait to go to Disney because that’s where all the fun people that made the cartoons were. And I told myself, ‘Boy this is not going to be boring, I’m going to have a great time.’ And guess what? It was a great time.”  Eventually he was asked to do the voice of the young deer as well.

Neither man continued to act. Behn worked in real estate and now lives in a home that is “almost off the grid,” producing almost all of its own energy through solar panels and a wind generator. Dunagan became a Marine, where he became the youngest drill instructor in the history of the Corps, and received medals including three Purple Hearts for his service in Vietnam. He never told anyone in the Marines about his connection to the film; he didn’t even tell his wife until two years after they were married, when she discovered a box with memorabilia and fan letters. “I tease her and say she made me eat peanut butter for a month for not telling her, but she is a gracious, wonderful lady and she really did not do that.”

Both men are proud of their work on the film. Dunagan had his copy of the first edition of the book by Felix Salten that inspired the film with him as we spoke. Behn said, “it’s not just a cartoon. It is a presentation of some beautiful, beautiful art. The background scenes were very surrealistic at time. The artist was Tyrus Wong and I think some of his Asian influence showed in the way he approached the natural settings. So if you see the movie again I recommend that you really pay attention to the background images and look beyond the action in the foreground, it’s quite remarkable.”

Dunagan appreciates the way the film follows Bambi “from birth to maturity, to responsibility.  It has an honesty about learning from trauma and recovering.”  This proved especially significant for him.  “In the movie Bambi is shot after his mother is shot, off-camera thank goodness but he understands his mother is gone.  Now Bambi is down and when big animals are down and they don’t get up their respiratory system turns bad and they die. So, Bambi is down and here comes his father for the first time really close up on camera.  He stands over Bambi and says, ‘Bambi get up, get up, you must get up.’ Right? Bambi does. In real life in Vietnam I’m in the mud, two o’clock in the morning, close combat, incredibly violent, I’m the commanding officer of a unit that needs me really bad and I got hit. I’m down. I’m half conscious, they need me to be conscious, I had to get on the radio call for support, I’m down and I’m in the mud and a wonderful young Marine, great kid, stood over me: ‘Captain, Captain, Cap, we need you, sir, get up!’ And I did, enough to get up and use a radio. Think about the irony of that in my life — from ‘Bambi’ on and back the other way.”