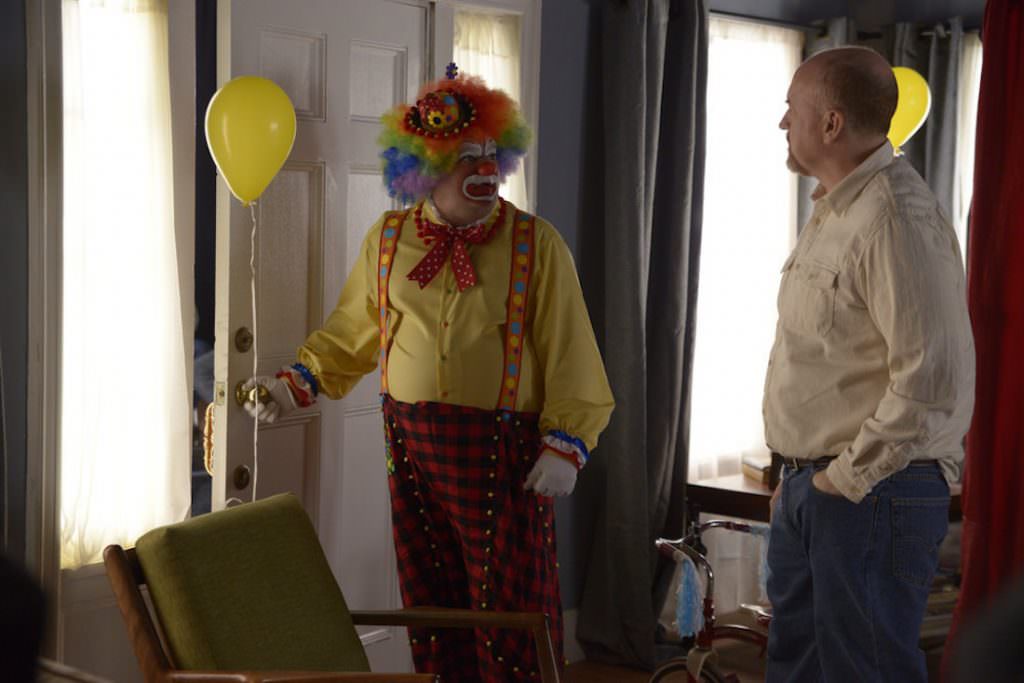 You knew that Louis C.K. wouldn't be afraid to go dark, or weird, during his hosting gig of SNL. While he may have eschewed the glitzy promo for the show, he certainly brought it where it matters most—into several supremely weird, dark, and very funny sketches.

Arguably the darkest sketch was "Birthday Clown," which had a childen's birthday party clown (Bobby Moynihan) show up for a job to perform at little Ernie's birthday, only to find out little Ernie is actually a grown man (C.K.), and the birthday performance is just for him. The whole thing is very creepy until it becomes, at the very last moment, pitch black dark.

For pure randomness, our money for best sketch of the night goes to "Sectionals," a nearly four-minute long ode to one man's love of sectional couches. The whole thing is as bizarre as the premise sounds (it feels, for the most part, like a really awkward commerical on public access television) until the kicker, which adds a jolt of the purely surreal. Louis seems to be enjoying himself immensely the whole time.

"Soda Shop" is the darkest of all the sketches, in what was, in retrospect, a pretty twisted show. This spin on the 1950s soda shop is that the owner of the shop (C.K.) should likely be immediately arrested. You'll see why.

And finally, there's "Thank You, Scott," a stab at our "resisting" on social media and the good our political posts on Facebook and Instagram do for the world.

All in all it was a very solid, very C.K. kind of night.

Pictured: (l-r) Bobby Moynihan as the Clown, host Louis C.K. as Ernest during the "Birthday Clown" sketch on April 8, 2017 — (Photo by: Ralph Bavaro/NBC)