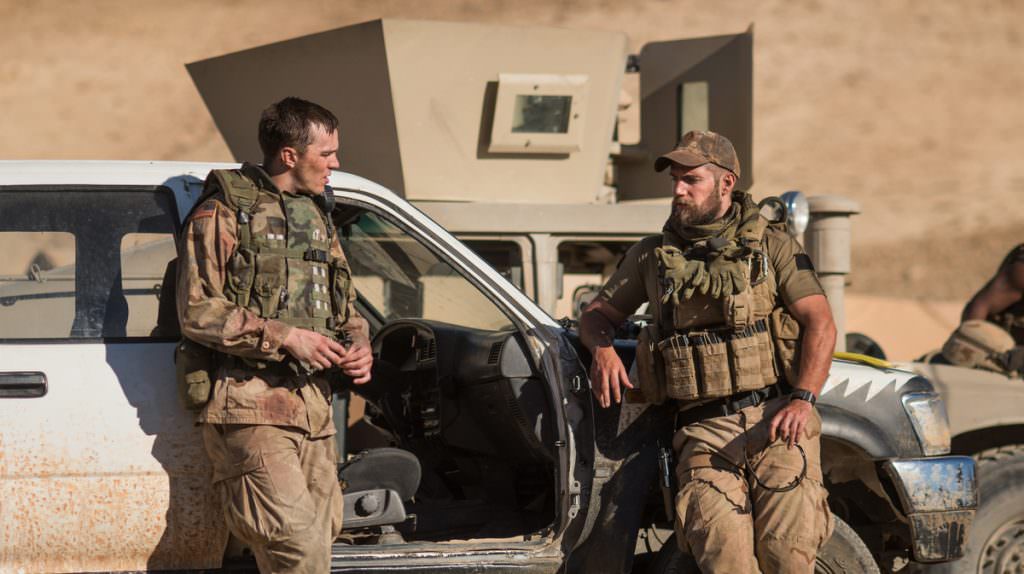 Screenwriter Chris Roessner's strange but rewarding career began the summer after he graduated from high school, when he sold air humidifiers door to door in his home town of Temple, Texas. Three years later, he found himself in Saddam Hussein’s abandoned palace working the night shift for U.S. Army occupation forces. Inspired by his deployment in Iraq, Roessner wrote Sand Castle (April 21), which stars Nicholas Hoult and Henry Cavill as soldiers working to win the hearts and minds of Iraqi civilians.

Roessner hatched the idea for Sand Castle after he saw Oliver Stone's Vietnam War classic Platoon late one night at the Iraqi dictator's former estate. "Being on night watch duty was great because it meant you're not going to die that week," he says. "I'd sit by the phone in case it rang and I had to dispatch soldier, but basically I got to watch movies all night. I put the Platoon DVD in my laptop at three in the morning and it really rocked me because I didn't know you could make a film so deeply personal and with such a young cast. Everything about Platoon resonated for me, so even though I didn't write Sand Castle right away, I knew in that moment 'This is what I want to do.'"

Filmed in Jordan, Sand Castle follows reluctant G.I. Matt (Hoult) and the rest of his team as they try to re-build a bombed out water pumping station for the benefit of Iraqi civilians. True to Roessner's own experience in the Army's Civil Affairs Unit, good intentions get undermined by insurgent violence. Roessner notes, "Matt wants to see the mission all the way through to the end. Like Matt, I grew to care about the people of Iraq. I also lost friends there so I wanted their sacrifice to mean something, but then one day you wake up and they say 'You're done' and send you home. That's jarring."

Roessner, who joined the U.S. Army shortly before 9/11 and left the service in 2007, had a hard time shaking off the trauma of war. As an antidote, he trekked in Nepal and raised money to build an orphanage children. "I wanted to serve in a way that wasn't mired in bureaucracy or red tape or moral ambiguity," he says. "When I came back from that trip I said, 'Okay, now I’m ready to start school."

At USC in Los Angeles, Roessner studied British World War I poetry, read Earnest Hemingway stories, enrolled in the school's graduate film production program and began working as an intern for producer Mark Gordon. Finally, during Christmas break, he started in on Sand Castle. "I didn't have enough money to fly home and visit my family so sat I down by myself and wrote the first draft in three weeks," Roessner says. "There'd be years of re-writes and emotional battery to come, but at the time it felt very cathartic. I thought, 'Holy Hell, this matters.'"

Producer Gordon (Saving Private Ryan) agreed and backed the project, as did director Fernando Coimbra (Narcos), who shot the film with Roessner's downbeat ending intact. "I didn't want to wrap everything up into a tidy little package because I personally felt that would do a disservice to my experience in Iraq," Roessner explains.  "It takes courage to remain empathetic when horrific events seek to strip Matt and the other guys in his platoon of their humanity. I also wanted to fictionalize the feeling of frustration when you spend a year and a half fighting and bleeding and your friends have died, and ultimately all you've done is taken a giant ship and turned it a half a degree in the right direction." Switching metaphors, Roessner likens his Iraq War mission to "pushing a boulder up a hill and watching it roll back down and pushing it up again," he says, "Then one day they switch you out with somebody else and it's their turn to push the boulder. It's emotionally exhausting."