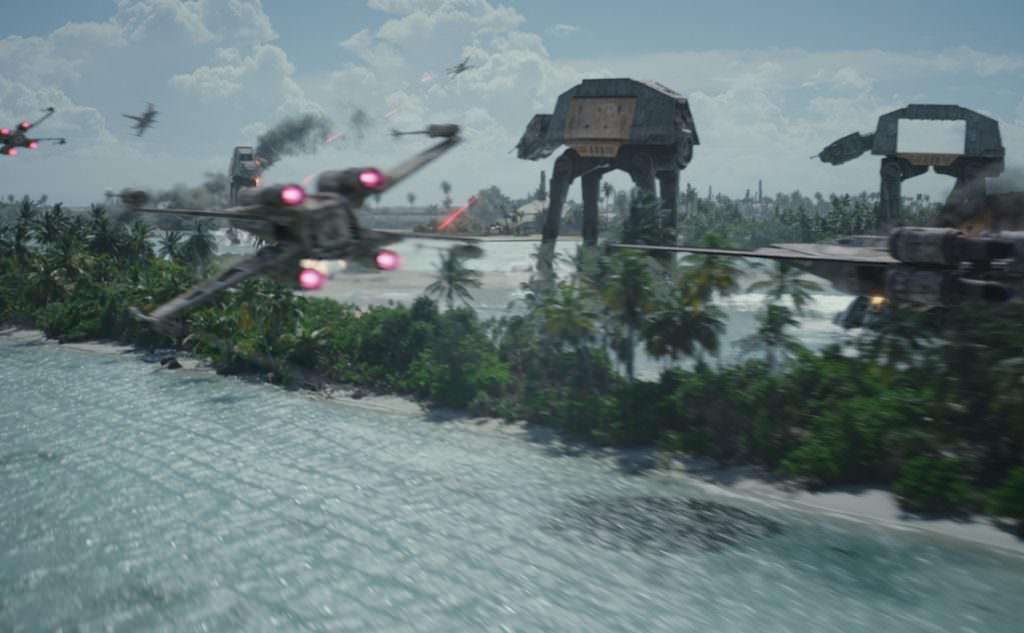 Special effects supervisor Neil Corbould says that he has “a big smile on my face” every day when he goes to work creating special effects for Clash of the Titans and Zero Dark Thirty. Corbould had a smile and then some when he described the new effects he created for the Star Wars prequel Rogue One: A Star Wars Story. We spoke with the SFX maestro about his work on Gareth Edwards thrilling addition to the Star Wars canon.

Were you a Star Wars fan as a kid?

Oh, yes, I remember seeing the first one, A New Hope, and feeling blasted away, it was something I hadn't seen before and it was done so well and has stuck with me in my head forever since.

Was there a special effect in that first one that really made a huge impression on you?

I think it was the space style and going down the gorge and blowing the Death Star up, it was such an amazing, exhilarating sequence. It still sticks in my head. As a fan, I was very excited when I got the opportunity to work on Rogue One. When I finally saw it, I wanted to see it again straight away; I was so pleased with it.

How do you stay consistent with the world of the original film and yet reflect something new?

We didn't want to push it too far past the original because it's such an iconic movie and our movie certainly went straight into A New Hope. So, we embrace the new technology that we had which made our job a lot easier, I have to say, but then kept the feel of the Star Wars universe.

How did it break down with practical effects vs. computer effects?

What was great with this movie is that [executive producer] John Knoll just said to me, “Look, do as much practicality as you can, go for it, just put as many explosions in as you can, put as much smoke in as you can.”  Normally they say, “Don't put any smoke in; we will put it all in CG,” but John was great in that respect. He said, “Create as much mayhem as you can in the battle sequences and we will make sure that it all blends into our CG into the background.” I think the end product speaks for itself. I don't think you can really tell where we finish and the visual effects take over.

Was there one effect that was a particular challenge for you on this film?

It was really the battle of Scarif. It was such a huge set that we were dealing with and we had actors in close proximity to quite large explosions. We developed and used an air cannon explosion that we could get actors really exposed to, really close so that was also the new technology that we brought into the movie which made it a lot safer set and it gave some great shots with actors right near these explosions.

It’s a very high-pressure nitrogen cannon, which is a container that can take a thousand psi (pounds per square inch) of nitrogen. In the past air cannons would have maybe 80 psi, so this a huge amount of higher pressure. Basically we just stuck this thing upside down inside another piece of metal — imagine like a wok with a 6-foot diameter and half an inch thick. We bury that in the sand and then put this high pressure cannon facing down, so all the force was pushed down, which would then push all the debris and sand and up in the air but without the sort of fire from any pyrotechnics because we were only using nitrogen with air. It just propelled this huge volume of debris up in the air that the actors could get very close to because it was also lightweight. It was groundbreaking for us. You know the worst the actors could get hurt was probably get bit of dirt in their eye, but they were such a good team of actors, they just embraced what we were doing and they just went for it.

What makes somebody a good special effects director? What are the qualities that you need to have?

I think it's just absorbing the energy that the director and the production bring to the movie. If you get a very passionate director it just makes you want to do more and please the guy in a safe way. Gareth Edwards is quite infectious; he's in there with you and he operates a lot of the cameras himself, the big ARRI 65 camera with the big lens on it.  He is running around in the middle of the explosions like all of us.  Like I say, it’s infectious and you just want to do as best as you can for somebody like that.

I’m very excited about your next project, Ready Player One. I loved the book. Can you tell me anything about it?