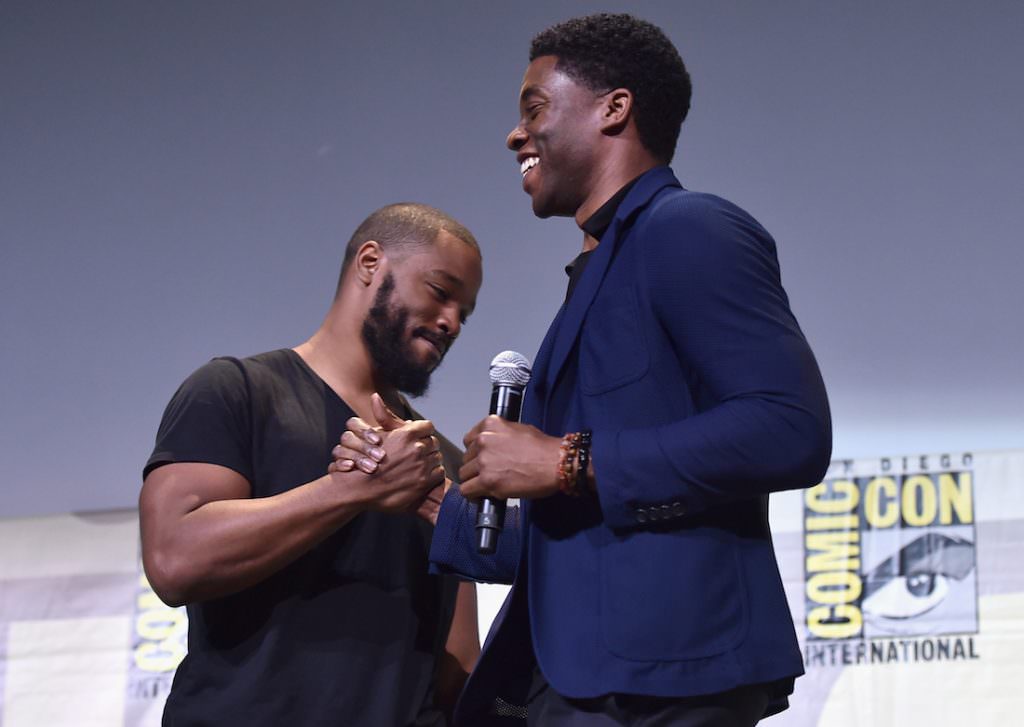 Marvel is feeling very good about Ryan Coogler’s Black Panther. This much was clear to the journalists who were invited to an open house event at the Marvel Studios’ office on the Disney lot this past Monday night for a preview of Phase 3 in their Marvel Cinematic Universe. The night included a full screening of Guardians of the Galaxy Vol. 2 (reviews are embargoed), teasers for Thor: Ragnorak, Spider-Man: Homecoming, Ant-Man and the Wasp, and some Black Panther footage, including a behind-the-scenes featurette and some dailies of scenes featuring the film’s stars Chadwick Boseman (T’Challa/Black Panther), Lupita Nyong’o (Nakia) and Danai Gurira (Okoye). We’ve rounded up some of the responses, all of which speak to a genuine sense of excitement from Marvel about Coogler’s films, and a group of journalists who came away from the night thinking Black Panther might be as good as we’ve all hoped it would be.

Coogler’s Black Panther, co-written with his writing partner Joe Robert Cole, takes place after the events depicted in Captain America: Civil War. T’Challa comes home to Wakanda after the death of his father, ready to succeed him as king. He’s surrounded by allies, like Angela Bassett as his mother, Queen Ramonda, and an all-female group of elite bodyguards known as the Dora Milaje, but being both a superhero and a head of state is task not even a demigod like Thor has been asked to take on. Multiple villains, including Michael B. Jordan’s Erik Killmonger, are threatening Wakanda.

Coogler came on board only after Marvel Studios president Kevin Feige let him know he could bring many of his longtime collaborators with him, including Cole, cinematographer Rachel Morrison (the first woman to shoot a film in the MCU), and composer Ludwig Göransson. From what has been seen thus far, it seems Coogler’s fashioned something wholly original, a Marvel film unlike any before it.

Vulture’s Kyle Buchanan, whose pieces is titled “You’re Not Ready for Black Panther’s Stunning New Spin on Superhero Movies,” wrote about Marvel executives, normally so secretive about new projects, seem to know they’re sitting on a winning hand. He describes one scene that has Nyong’o kicking some serious butt in footage that “carried with it an undeniable X factor. He went on: That’s exactly the sweet spot the studio hopes to hit with Black Panther: The film has to be familiar enough to fit into Marvel’s ever-expanding cinematic universe while also offering enough spark to jump-start its own singular franchise. A tricky task, but to judge from some of the stunning things that D’Esposito and his colleagues showed off last night, it looks like Marvel is on the right track.”

Both Vulture’s Buchanan and Vanity Fair’s Joanna Robinson were blown away by the film’s look, specifically the costume design by Ruth Carter.

“The costumes in Black Panther—especially the ones worn by the Dora Milaje—are truly dazzling, with a lot of bright colors and elaborate patterns,” Robinson writes. “Angela Bassett, as T’Challa’s mother and Queen of Wakanda, sports a jaw-dropping coiffure of snow-white dreadlocks. According to the production team, director Ryan Coogler was interested in giving Black Panther—the star of which debuted in Civil War—an updated look that was more faithful to the current run of comics. And though Marvel didn’t screen any footage of Michael B. Jordan in costume—he’s playing villainous Erik Killmonger—concept art tacked to the Marvel office walls revealed a fearsome mask compete with horns and mane.”

“Black Panther doesn’t look like any of the other Marvel movies, and it shouldn’t if it wants to pay proper tribute to the impact of the first black superhero in mainstream American comics,” Buchanan writes. “Let’s start with the costumes by Oscar nominee Ruth E. Carter, making her Marvel Studios debut. Whether T’Challa is spending his downtime in a dashiki or the Dora Milaje are marching in warrior suits of rich brown and gold, Carter has found a remarkable way to merge centuries of African culture with the particulars of superhero pop.”

The Verge’s Bryan Bishop also wrote that the film looks like nothing Marvel has made before: “These were brief glimpses and carefully curated highlights, but it seems very clear even at this point that Black Panther is going to stand out from the rest of the studio’s work — and that Coogler as a filmmaker is bringing his sensibilities to Marvel’s massive sets and blue-screened stages.”

As for the setting, everyone seemed immensely impressed with the depiction of the fictional African nation of Wakanda.

Then there’s the fictional setting of Wakanda, which trades the prosaic metropolitan cities of most Marvel movies for something exciting and new,” Buchanan writes. “T’Challa’s wealthy nation strikes a balance between high-tech futurism and verdant nature, suggesting an African grassland where technology can enhance what the earth gives us instead of plundering it. We saw dailies and concept art of an African tech castle with a driveway filled by sleek airships, a glowing Vibranium waterfall, a futuristic Wakanda Design Center where T’Challa goes to visit his sister Shuri, and a shot so striking — T’Challa, deep in the forest, regarding an old tree draped with a dozen panthers — that it’s been painted as a mural in one of the studio’s most highly trafficked hallways.”

“Overall, the Black Panther footage was very engrossing and offered a view into an exciting new area of the Marvel Cinematic Universe, one where futurism and a distinct culture's rich past intersect to create a vibrant, exciting new world to explore onscreen.”