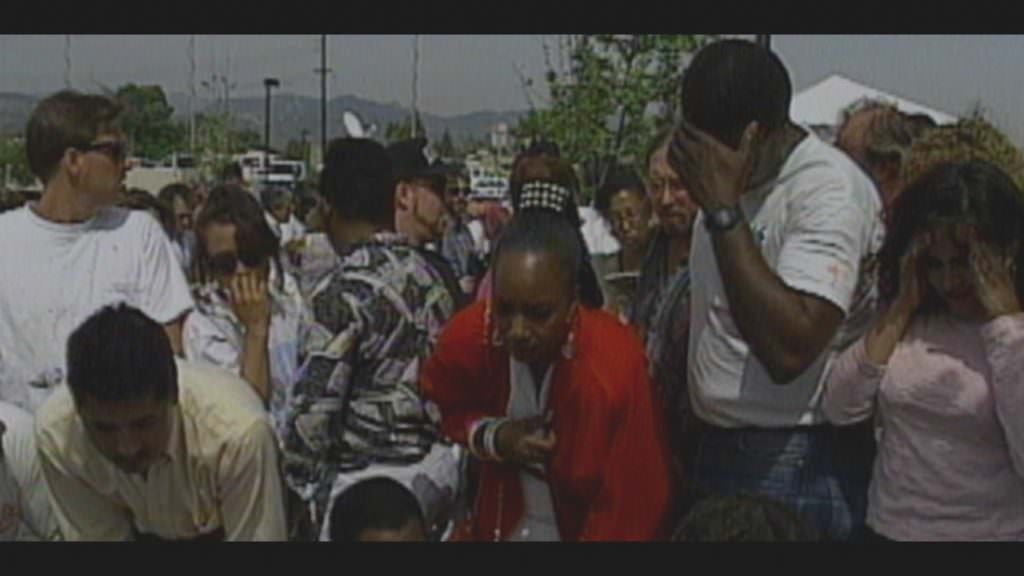 He wrote 12 Years a Slave and tackled anti-Muslim prejudice, homophobia and immigration in his American Crime TV series. Now, 25 years after the Rodney King "not guilty" verdict sparked riots in Los Angeles, Oscar-winning writer-director-producer John Ridley takes another deep dive into American dysfunction with Let It Fall: Los Angeles 1982-1992. Opening theatrically April 21 and airing on ABC April 28, the documentary examines a decade's worth of catastrophic decisions culminating in the six-day uprising that cost 55 lives and more than a billion dollars in property damage.

"For many people, the events of this story are reduced to the Rodney King beating and the Reginald Denny assault," says Ridley, referring to the attack on white truck driver Denny in L.A.'s South Central neighborhood shortly after a white jury freed four police officers despite video evidence documenting their 1991 bludgeoning of black motorist Rodney King. "Here's the beating of a black man and an assault on a white man, so you have this odd sort of symmetry, but it was very important for us to go beneath the surface and ask 'How did we arrive at these events?'"

The film explores that question through an interlocking set of interviews with victims, criminals and heroes connected in myriad ways to the long-gestating tragedy.  Teamed with Lincoln Square Productions, a division of ABC News, Ridley and his colleagues interviewed dozens of people who'd been personally affected by the toxic convergence of violence, cultural misunderstanding, poverty, crack cocaine, gang warfare and racist law enforcement practices. Ridley explains, "We didn't just call up people with different backgrounds from different communities and say 'Hey we're doing a documentary, sit down with us.' We had to let everyone know they could tell their stories without being judged. As filmmakers, we weren't interested in exonerating individuals or indicting individuals. It was about asking people to share their memories, knowing we would honor those recollections."

As a group portrait of sorts,  Let It Fall depicts a toxic system destined to implode. Subjects include the girlfriend of James Mincey, Jr. who died in 1982 when police put him in a chokehold; Kevin Toshima, whose sister Karen was killed in 1988 by gang crossfire in L.A.'s posh Westwood community; the woman who watched a Korean shopkeeper shoot 15-year old customer Latasha Harlins dead in a misunderstanding over a bottle of orange juice; Henry "Kiki" Watson, who attacked Reginald Denny; Bobby Green, who risked his own life and saved Denny's by driving him to the hospital; and Lisa Phillips, the cop who disobeyed orders to stay away from South Central and rescued a woman from violent rioters.

Ridley conducted about half of the interviews himself, noting that the Q and A sessions often resulted in tearful moments. "'People were very honest about mistakes, regrets, about what they wish they could have done differently. Others had never been more certain about the choices that they made. For me it was amazing to see where this array of people landed 25 years later."

Ridley interspersed first-hand accounts with archival material to chronicle an era riddled with unintended consequences. "We go back to what could be called the chokehold era," says Ridley, referring to the period when police routinely "choked out" African-American suspects. Steel batons came next but the weapons only exacerbated law enforcement violence. "It's the cascade effect," Ridley says. "We wanted to show what happens when systems are unfairly applied, so we included the 1984 Olympics, when all eyes were on Los Angeles and it seemed like the city was at its best, yet other parts of the city were being ignored and got left out of this economic boom."

Let It Fall steers clear of obvious advocacy, preferring to tell its non-fiction tale through the voices of ordinary civilians buttressed by information gleaned from the public record. "We used the underpinnings and infrastructure of fact and the removal of my own personal opinion about what happened," Ridley says. "Whether it's some of the folks in South Central or some of the police officers, you could walk away from this film and say what they did was wrong or worthy of condemnation. On the other hand, you could say some were heroic. The thing that was important for us was to show you the complexity of human beings who had to make complicated decisions. It isn't about agreeing or disagreeing with these people. It's about understanding."