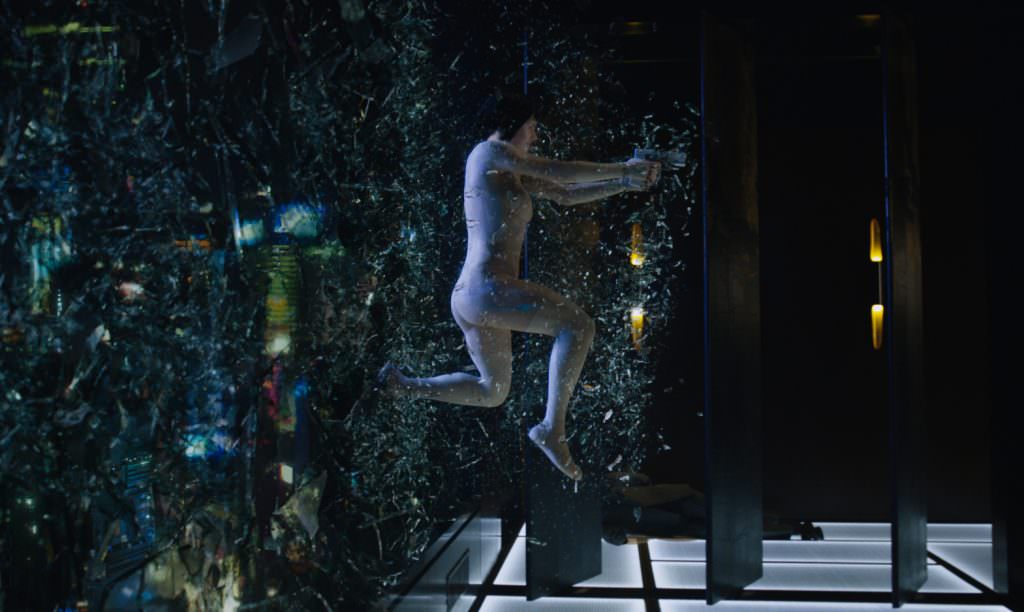 How Ghost in the Shell ’s VFX Supervisor Got Cyberpunk Right

A cult hit since its manga origins, Rupert Sanders’s live-action Ghost in the Shell has had to meet high fan expectations, particularly in regard to visuals. The film is as well known for its gritty, near-future post-cyberpunk aesthetic thanks to Mamoru Oshii’s 1995 animated film, and as Paramount Picture’s Scarlett Johansson-driven feature arrived in theaters, a legion fans were more curious about what the movie would would like than the cybernetic-focused science fiction plot. We chatted with VFX supervisor Axel Bonami about recreating the infamous future city.

How did you use the original manga series and Oshii’s film for inspiration? What other visuals did you turn to, if any?

It was just to get in the mood of it. It was very important to get Rupert’s vision, and making sure we were in line with his take on the movie. When we got into production, right after the shoot, we started with the color palette, the mood, everything they were aiming for. In terms of costume design, and set design, the look was really strong. We started with that from there, then we built a city and the characters in line with the pre-production contact work.

What was the most difficult sequence to create?

All of them! All the sequences were a challenge 00 its whether we can start with the futuristic world. The challenge was that we had to build a modern world with a kind of [ancient, gritty] look. It’s a city built on top of a city. It was a combination of fully computer generated shots, like the ghost camp, then based on a Hong Kong location. We had a miniature made as a reference, to model a version of this, and then the architecture of concrete block, wires, that little dirty city on top of an old city. Then we had the whole hologram idea. They wanted to add those big two dimensional billboards. We had some ideas that were made early on and then specific [ones later]. We generate a 3D model for different advertisements, generating graphic design for the ads, streets signs, highway signs, tons of elements integrated into the city.

Even though we had concepts early on, we had to carry them on in post production. We could incorporate newly designed graphic design, holograms, into place, so we could adapt the city with the material we had. It was a really long process and toward the end we were still building the futuristic look of the city.

What was the experience like working with the robotics team at Weta, if you did work with them?

The workshop was doing props and some set design as well. Our collaboration was more taking over what had been shot, they had some props that were made, we made a digital version of these, allowed them to go into a diverse direction, [added] more complexity. For the Major’s suit, it was bulging and bulging a little too much, due to the extreme motion Scarlett had with it, so we knew we’d have to replace it digitally and add some enhancements. There would be wrinkles and iridescence on the surface. Then we added some refinements to the design. So we changed the suit look to make it way thinner and like a second skin, and it was fully digitally replaced so we could add all those functions, changing the design, going in and out of visibility, and keeping the suit alive.

From your work on Harry Potter to the Chronicles of Narnia, this is seems like old hat for you. How did the experiences compare?

That’s something that is really cool in our industry, every shoot is different. We never do what we’re comfortable with. Especially with Ghost, there’ s a little pressure. It’s part of my generation as well. I’ve seen it a long time ago, and to work on it, you’re excited and scared at the same time. We always push the boundaries. It’s never like, we’re going to do it like last time. There is a build-up of tools that we use, but we push it to the next level. It’s constantly pushing the boundaries, [asking] ‘how are we going to make this better?’ And make the experience even better.

It was a great experience. What makes it visually strong is how we blended all those different departments. Because with everything green screen, these actors in the middle of the empty room, I really find it more powerful when you add and blend. We used a lot of hybrids. Major, the Geisha, etc. [could be] 95% digital and then 5% practical. For instance, we keep the actor’s face, their hands sometimes, make it embedded into the shot.

How involved was Rupert Sanders on the effects?

Very. Rupert has a very strong visual background as well. He totally knows how things work, he has high expectations. We had reviews with Rupert — he’s very present, very involved. [And we] make sure we support his vision as much as we can.