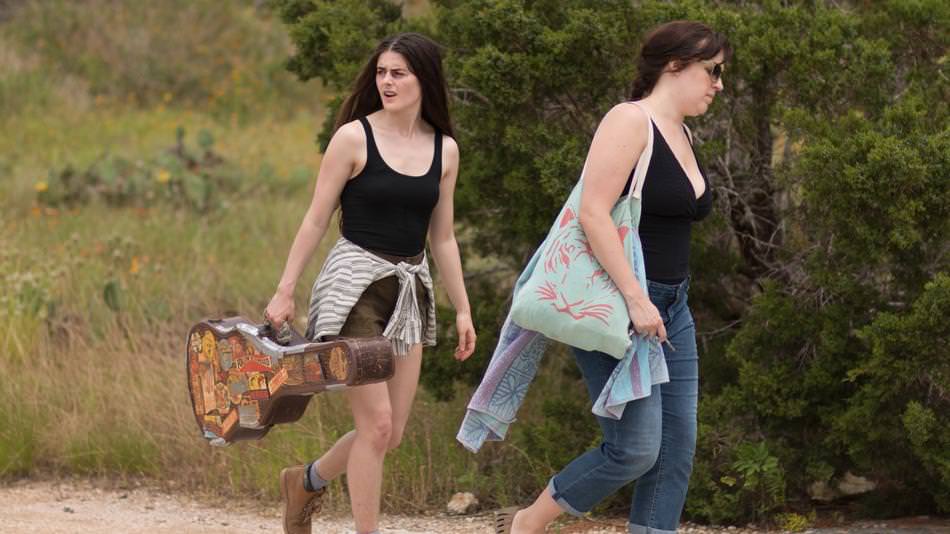 Shot and filmed in Austin by local filmmakers Jason Cortlund and Julia Halperin, La Barracuda was a hometown darling at SXSW. The suspense drama stars Texas native Allison Tolman (Fargo) as Merle, the tone-deaf daughter of a country music legend. When a mysterious woman appears and introduces herself as Merle’s half sister, Sinaloa (Sophie Reid), tensions flare. Everyone in the family has their suspicions of her true intentions that range from selfish to sinister.

Reid is a welcome fresh face with unbelievable musical talent. A highlight of the film is her musical performances that were recorded live. There is a particularly impressive scene featuring a country jam session around a bonfire. Her performance is at times unsettling, but you can’t help but hope that she gets what she wants, whatever that might be.

We sat down with filmmakers Jason and Julia and the films star Sophie to talk about the suspense genre, playing original music live on screen, and what it takes to make a movie in Texas.

What was the inspiration for the film?

Jason: There’s the idea of a secret sibling or having this half brother or half sister somewhere in the world. It’s a personal thing for me and my family that I’m never going to have answered. It’s out there somewhere and I think it would be invasive to actually go out and track down that lead. To scratch that itch it was kind of a fictional approach to kind of deal with that.

The guitar that Sinaloa was given from her father has a barracuda on it. What is La Barracuda to you?

Jason: It is the guitar, but it’s also thematic. We developed the script in Italy at the Venice film festival. Venice has a program for developing first and second features. One of our mentors was an Italian screenwriter who said, “But it should be Il Barracuda.” And I said, “No, that’s in Italian.” Barracuda is a masculine word in Italian, but in Spanish it’s a feminine word. Texas is part of Mexico. We are still connected. We are a nation of our own, but we share a lot of culture with Mexico. It’s a native fish to the Gulf waters and it is also a predator.

Sophie: I had to look up the definition of what a barracuda was and it’s basically a fighting fish that lurks underground for a long time until it’s ready to get its prey. There’s a stealthy waiting in the dark thing.

Sinaloa is a very mysterious character that at times can be unnerving. How did you balance that aura while also playing someone who earns these strangers’ trust?

Sophie: My feeling is that anyone who is capable of violence, especially a female, they have to have been brutalized themselves first. It’s not often that you get a violent or viciously driven woman unless something bad has happened to them first. My feeling with Sinaloa is this very hard surface has been formed just out of defense and protection from what was probably a too sweet and vulnerable person who got taken advantage of. In regard to how I find a way for her to drop her guard down has a lot to do with Merle. There’s a line in the film where she says, “I wasn’t expecting to like you.” Merle’s patience with her and openness unlocks a little bit of a deeper longing, which is to have a family and feel less alone in the world.

This movie is very psychological and leaves some questions unanswered. Did you all discuss and agree on the parts that are not explicitly revealed on screen?

Julia: The actor needs to know and make a decision for themselves. The character knows what it is. I don’t necessarily believe in interfering in those decisions that an actor makes. If it needs to be a certain decision for the story, then I would check it. But I try to leave a lot of autonomy to the actor. They have better tools for that. My favorite films leave a lot of room for the audience to make decisions and put things together. There were certain gaps, even things that we shot and didn’t include in the final film because the audience needs to make decisions about how certain things happened. I think they’ll be more interested if they can be an active participant.

Jason: I think they invest and if they’re filling in the gaps, that’s what you want to have happen. You want to have those conversations in the lobby where they are maybe debating and arguing about certain things. Our job has to stop once those credits are done. We’re depriving people if we answer those questions.

Sophie: Julia was so perceptive with me and Allison. Sometimes it would not have been useful for Allison to know what I was thinking and vice versa. We would have had too much information. That was a really exciting part of the process. What conversations do we have together and what do we keep to ourselves?

Did you explore Sinaloa’s past and feel like you know everything about her now?

Sophie: In order for her to make such strong and sometimes extreme decisions, she needed to have very clear reasoning for how she operates in the world. In order to find that out, I like to write for my characters. For Sinaloa who is a lyricist, there was a lot of writing journal entries, collecting stuff from her environment. I penned a poem that her father had written to her, which helped focus each scene. I know quite a lot about her.

The music was so great and I’d like to listen to it again. Will you release those songs as an album?

Julia: We have a lot of music that is only slightly in the film or didn’t make the film. We are definitely interested in releasing the film in such a way that we can release that. In the days of physical media it would have been bonus tracks, but there are ways that bonus material gets bundled in digital releases. We have fantastic live recordings. We really spent time planning the actual technical side of how to record musicians around a bonfire so it sounds good.

Julia: We spent a lot of time on that.

Sophie: I was amazed at that having done live gigs. Each take was vocally slightly different. Maybe the guitar tempo was slightly different. I walked away from set wondering how it was actually going to translate. I was blown away with what’s been done.

How did you pull off using all live recordings?

Julia: We weren’t going to bring all of those musicians and spend all of that time and then not try to capture something special.

Jason: It was a lot of collaborators brought in to consult our sound guy, Paul Toohey. He was very diligent and did a lot of legwork in advance talking to sound engineers that helped to make sure it sounded good. It was fairly elaborate. Music venues are easier because you can patch everything through a soundboard and get even lines on every instrument and every mic. For that live recording around the bonfire, it took a very elaborate scheme. I think there were a dozen different lavalier mics. One on each guitar, one on each instrument, one for each singer plus double booms. It was such a collective thing and we’re blessed to be able to do that in Austin where music and film do overlap quite a bit.

What was your experience with crowd funding to produce the film?

Jason: One of the reasons we had to do crowd funding was we didn’t have a tax incentive. It’s not a huge incentive in the state of Texas, but we were counting on a small return because we mostly hired local people, local facilities, local equipment. We believe in making jobs here in our state and in our industry. We have very good crews here, but the Texas state legislature slashed the budget that was available for productions last year. There was no money left for productions like us to even recoup a small part of our budget that would make a huge difference to us. $20,000 is a huge difference. So when that money evaporates out from under you and you’ve been developing a film for three years, you have to make that up somewhere at the last minute. It’s a hardship.

Julia: We do know people who say, ‘We’re going to shoot in Georgia or I’m going to shoot in Louisiana.’ There are people who do that and that was even raised to us to shoot in New Mexico. We didn’t want to do that. It’s a Texas story. Our musicians are local. Our locations are very particular to this story. We didn’t really want to substitute something else. It is a fact that Texas loses productions if it doesn’t have incentives.