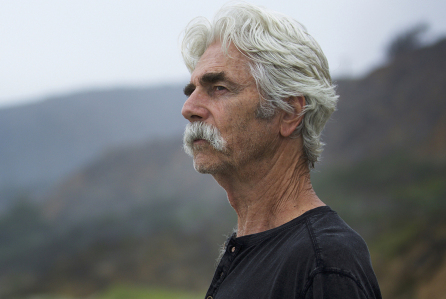 SXSW darling The Hero was a tender exploration of love, loneliness, and typecasting. The story follows former western star Lee Hayden (Sam Elliott) who spent his life overshadowed by that one big role. When a cancer diagnosis strikes, he struggles to define his legacy and connect with people who knew the man better than the myth.

There’s possibly no actor who understands the frustrations of being stereotyped better than Sam Elliott. His towering stature, inimitable baritone voice and trademark moustache have made him a western icon. After nailing roles like Wild Bill Hickock in Buffalo Girls, Virgil Earp in Tombstone, and uttering the iconic words, “Beef, it’s what’s for dinner,” Elliott became synonymous with cowboy roles.

Director Brett Haley wrote the role of Lee Hayden specifically for Elliott. Haley is an incredible talent in his own right, but he confessed he has something in common with his audiences, “I love Sam and I’m a huge fan.”

Haley cast Elliott opposite Blythe Danner in his sophomore film I’ll See You in My Dreams and they had an immediate connection. He began developing the script for The Hero with writing partner Marc Basch to feature the veteran actor. “I just thought I wanted to give him something where he was a lead and not on a horse,” Haley explained. “He just got to be a real person, not a military person, not a biker, not a cowboy. He’s amazing at all those things and that’s partly why we love him so much. But, I wanted to make him a real guy.”

Although Elliott could carry the entire movie with his magnificent performance, he doesn’t have to. Haley stacked the deck with supporting performances by Laura Prepon, Nick Offerman, Krysten Ritter, and Elliott’s real life wife, legendary actress Katharine Ross. “When you’re directing a scene with Katharine Ross and Sam Elliott, you have to pinch yourself,” Haley admitted. “It’s a little intimidating. They’re awesome to work with. You’ve just gotta fake it until you make it. I just do everything I can to not screw this up.”

Touting an A-list cast is no fluke. I’ll See You In My Dreams featured June Squibb and Rhea Perlman with Blythe Danner in the lead. “You get lucky and you hope your writing speaks to people and is characters they want to play and characters that aren’t just one dimensional but have real depth,” Haley said. “That’s the way that Marc and I try to write. So far so good. Hopefully we keep working with wonderful actors because that’s everything to me.”

The film’s title is a self-aware nod to the whole point of the story. Audiences just hearing about it would be forgiven for expecting the film to feature an actual hero, but the protagonist is often lost under the weight of expectations. “In the movie I’ve created, he is ‘The Hero,’” Haley explained. “That’s what people know him as. It would sort of be like when Eastwood was ‘The Man with No Name.’ The movie is called that because that is what people think when they see him. It goes beyond, ‘There’s The Hero.’ There’s the mustache. There’s the voice. There’s the western icon. Instead of there’s the man and what’s beneath that? It’s a bold title.”

Early in the script, Lee Hayden learns he has an aggressive form of cancer with few treatment options. Before you think the movie is too heavy, rest assured there are plenty of moments of levity. Seventy one year old Hayden spends much of the movie getting high, experiments with drugs with his decades younger girlfriend and unwittingly becomes an internet sensation. In spite of a grim diagnosis, it’s fun to see Lee having fun with people who want to love him for being himself. “That’s really at the end of the day all that matters,” Haley said. “All that matters are these relationships we form in our lives with our friends and our family. In many ways that’s what this movie is about. It’s a simple idea, but it’s a beautiful one and one worthy of a film.”

Ultimately, Lee has to reconcile the way an audience relates to a movie and the stars who bring them to life. He cynically says to Jeremy (Nick Offerman), “Movies are other people’s dreams.” Haley explained that this is a thread of the film. “There are a lot of movie references because he’s struggling with his own persona and his legacy as Lee Hayden ‘The Hero’ who made one great film and Lee Hayden the regular guy who is just trying to do his best.”

It’s a lesson we could all learn and The Hero is a beautifully told reminder to appreciate the people who love us. “At every point in your life, somebody has a different agenda than you in that moment, in that day, in your job, in your life. That’s life,” Haley said. “In some ways Lee Hayden doesn’t have an agenda at all. His agenda is no agenda. His agenda is joints and Thai food. Then life steps in and life has it’s own agenda and pops him out. We only get so much time. I just come back to trying to really get at what makes us human. What makes us alive because we’re lucky to be alive.”

Featured image: Sam Elliott as Lee Hayden in The Hero. (Courtesy: The Orchard)