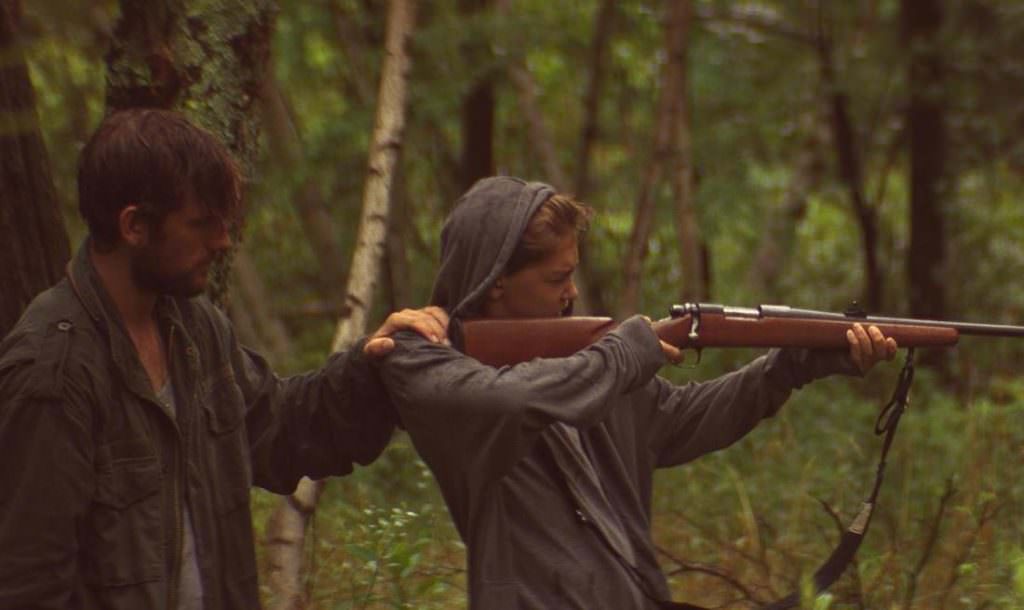 SXSW 2017: The Strange Ones Directors Play With Your Perceptions

Christopher Radcliff and Lauren Wolkstein’s feature-length debut The Strange Ones is a slow burning, twisted coming-of-age story co-starring Alex Pettyfer and 14 year old James Freedson-Jackson, who won SXSW’s Special Jury Prize for breakthrough performance. He’s immensely deserving of the accolade, delivering a performance of almost unnerving poise for a 14-year-old actor. It had begun its life as a short six years ago.

The feature film opens with two brothers on the run. There’s the handsome, protective older brother Nick (Pettyfer) and his younger brother Sam (Freedson-Jackson) in a car. Brief glimpses of what they’re fleeing show a deadly showdown with their father ending in a house (presumably theirs) in flames, yet the cause of this violence is left mysterious for much of the film’s running time. Mystery shrouds the very nature of Nick and Sam’s relationship, which begins to change as the two move from a brief idyll at a motel (ruined in one of the film’s standout scenes, in which Sam confronts the young woman running the motel about her fondness for his brother and obliterates what you thought the film was about) and move on to a cabin in the forest, and eventually, a farm. What happened between them and their father, and who they are to each other, is a question of perception, of who's doing the looking and the asking. It's a question that Radcliff and Wolkstein deftly play with throughout. A major second-act twist ensures that Sam is going to have to grow up quickly and come to terms with the reality of his past, a reality all the male figures in his life have told him he could simply wish away.

I got a chance to sit down with the two filmmakers at SXSW. The following Q&A has been edited for clarity and length.

Let’s start with how you two came to this story.

Radcliff: We graduated from film school in Columbia, and right before we graduated we decided to make a movie together. We didn’t really know what we wanted to do but we thought we wanted to do something dark and weird, and that didn’t really follow the film school rules we’d been taught. We wanted to make something that unfolded in whatever way it wanted. The idea of the narrative unfolding of the movie, the way it plays by it’s own sort of dramatic rules, let’s just make a movie where everything you think in the beginning of the movie, you think something very different by the end, but it all feels like this ambiguous, hazy unfolding of a mystery. I’d been researching some true crime stuff with Lauren, so in our minds it sort of all connected. The seed of the idea is two guys in a car who you think are brothers, and you slowly start to find out they’re not…

Wolkstein: And you figure that out through somebody else who sees them and has their own perception, which is kind of the audience’s perception of them.

The idea of reality is perception is one of the film’s main thematic elements—how did you managed to bring it across visually and narratively without belaboring the point?

Radcliff: It was a big deal to us that every piece of information is through a specific point of view, and sometimes it’s conflicting, sometimes it builds up to something you’ve already known, or sometimes it’s a weird, new perspective. Super suggestive storytelling is what we were going for.

It helps to have such capable actors in your central roles. Let’s start with Alex Pettyfer’s Nick, who is quite a likable guy, all things considered.

Radcliff: He is, and he’s a reservoir for Sam’s affection. The main perspective of the film is through Sam’s eyes. We’re seeing most of the movie through Sam, so the older brother character has to take on various qualities at different times in the movie, and we wanted him to be very likable, but then we wanted him to be intimidating, sexualized, but then again also like a father figure…

Wolkstein: It depends on how Sam’s feeling about Nick at certain times.

The intense scene between Sam and the motel owner…to hear a kid that age talk like that!

Radcliff: We auditioned him with that scene.

Wolkstein: He blew us away.

Radcliff: The thing about the characters is there are these spikes of real darkness, and moments that not every kid could handle or be comfortable delivering lines of this nature. He was one of the younger kids we auditioned, and he was also the most comfortable, the most mature and capable, and just blew us away right away. He’s acted before—he was in Cop Car—so he’s got chops. But he had a great understanding of what we were going for.

Wolkstein: He didn’t shy away from the material at all.

Radcliff: In fact, he really embraced it.

There are several emotional pivots in the film that completely change what you think happened. How difficult were those to create without losing the viewer?

Radcliff: Our main concern writing the script and editing the movie was what pivots are we making with the audience at what times? The movie’s constructed so that every scene, every line of dialogue and every shot could be read in multiple ways and have multiple layers to it. We wanted to highlight different layers at different times, and have these potentially very different readings of the film. We wanted to subtly change directions throughout the film.

Wolkstein: Which was the hardest part of developing the story. We kept asking ourselves, when do you reveal something so that it’s still satisfying, but the audience is still trying to figure out things without us telling them this straightforward interpretation of it? Pacing was a big thing for us.

You return to this idea of the masculine notion of how to get over something, which is to simply stop thinking about it. This is…not the best advice.

Wolkstein: We wanted the paternal figures in his life to give him this advice that they think is the way to help, and it’s ultimately not the way to rid yourself of this drama. ‘Don’t think about, don’t deal with it!’

Radcliff: And with how the movie plays with perception versus reality, we had this idea that in film all reality is equal, so perception really is reality. That gets played through Sam trying to create a new reality for himself because he’s so traumatized by what actually happened. What he’s getting from the Nick is that you can make you own reality; you can make this bad memory go away, even though that’s not great advice. Sam’s so stuck between trauma and the present tense, and this fantasy of what he hopes his life will become on this trip versus the reality of what it’s becoming. We wanted to blur those lines, reality versus dream, real versus not real.

It’s a very male film, and one read would be, ‘Men give bad advice,’ especially when it comes to dealing with your emotions. The few women in the movie seem to see through the unreality.

Radcliff: It was subconsciously deliberate on our part. The detective, for example. [Played by The Wire’s Melanie Nicholls-King].

Wolkstein: The women represent the opposite of what the men represent in the movie, which is the maternal nurturing that Sam doesn’t have in his life. He doesn’t have a mother, and so they come at different parts and leave quickly. They’re in and out; they’re not really involved in his life, so he doesn’t know how to be a part of that.

Radcliff: But they do have a power that the male figures don’t have in the movie. We really tried to create the film from an internal place, and his being a male character, it sort of worked itself out that there’s thematic undertones of male weakness in the film, male coming-of-age, and he’s trying to figure out his own masculinity, and he idolizes this very masculine, older guy in Nick. He’s in need of and in search of a father figure, but all the men in his life are fatally flawed in a way. The female characters represent a…

Wolkstein: An alternate reality. This could have been something in his life that he never had. And when they do come in, it’s almost too late.