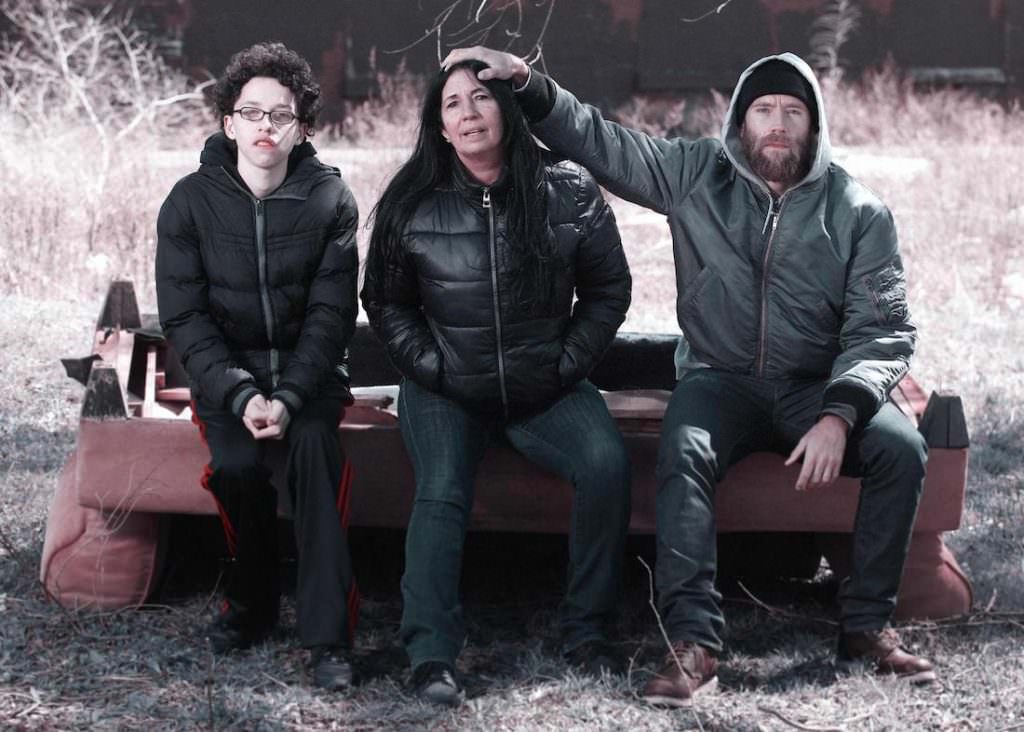 In his label-defying fourth film as director, actor/writer/director Mark Weber (Green Room, Scott Pilgrim vs. The World) has delivered a subtly powerful shot to the heart with Flesh and Blood. Calling the film “reality cinema,” Weber has turned the camera on his mother, Cheri Honkala, his half-brother Guillermo Santos, and himself, turning his unconventional upbringing and tight-knit, highly atypical family into a moving portrait of a uniquely American story. In fact, the only person in the film who doesn’t play a version of themselves is Weber’s real-life partner, Teresa Palmer, who has a brief, potent, wordless cameo at the film’s end.

“I have an incredible family and friends who were willing to be a part of this process,” Weber says, seated at a table with Guillermo, Cheri and the actress Madeline Brewer, who plays a former love interest in the film. “I’ve been lucky enough to have worked with a lot of really great directors as an actor throughout my career, and I found my voice with the second film that I made, in terms of what I like to call ‘reality cinema.’ I made a movie called The End of Love, which I made with my son when he was two, and built the whole production around him, so Flesh and Blood is the fourth feature I made with the same DP, the same editor, so there’s a real deep understanding of the process.”

Flesh and Blood opens on the day Mark is released from prison, with Cheri there to greet him and drive him home. That home is in North Philadelphia, where Cheri works as an anti-poverty activist, poised to start running as the Green Party’s candidate for Vice President, on Jill Stein’s ticket (this really happened, in 2012). Mark will be sleeping on a mattress on the floor next to his brother, Guillermo, who has recently been diagnosed with Asperger’s Syndrome. Save for the prison term, just about all of the above is real, and what follows includes more people in the family’s life, including Guillermo’s father, the recovering addict Big G., the recovering addicts and ex-cons Cheri works with, and Mark's assorted friends and former associates.

As we follow Mark trying to get his life back in order, staying sober and looking after his brother, we’re also given generous glimpses at the lives of those recovering addicts, former felons, the homeless, and others usually left in the margins of films. One of the Flesh and Blood's great strengths is its empathy, which Weber showers on everyone his camera touches. The performances are as raw and natural as you’d expect, given the material and the fact that real-life people are playing versions of themselves.

“The movie’s a combination of letting real moments unfold, and then a lot of staging and takes, and then blending it so you can’t really tell,” Weber says. “The script was a treatment that I wrote, and there are little suggestions for dialogue and bits of lines to say, but the majority of dialogue and moments are happening in real time, and sometimes those moments are repeated and explored a little more."

Many of those moments end up becoming darkly poetic. The scenes involving Guillermo's father are a prime example. Big G. is a charismatic, warm, deeply damaged individual, and his love for his son and remorse at his own choices are deeply moving. Flawed fathers haunt Flesh and Blood. Meanwhile mothers, in the form of Cheri and in Mark's former flame, Maddy, are what hold this world together.

“I just wanted to make this as accurate a depiction of a relationship between two people as possible,” Brewer says. “We’d have an idea for what we’d want to get in a scene, then shoot it and see what happens, which, as frightened as I was of it, it was a relief to do it and feel natural in it.”

The moments between Mark and Guillermo are some of the most moving. The two are a study in opposites, with the reed-thin, teenage Guillermo discussing being bullied at school, preferring video games to human interaction, and his newfound love of filmmaking. Mark's wants only to protect Guillermo, and one of his major struggles now that he's out of prison is coming to terms with the limits of what he can do for his brother.

“It’s perfectly ambiguous, to certain plot elements,” Santos says. “There are so many questions that are left unanswered, but not in a failed narrative way. They’re left unanswered in a ‘this movie is going to stick with you for the longest time’ way. Because even after filming it, even after watching it, and even after these interviews, I’m still learning more and more about it. I’m still absorbing it and trying to make sense of it, even to the point where, I am Guillermo Santos, I was that kid, and so I know what happened after the credits rolled, but I want to see that kid’s story more than the story I lived out.”

“For me, I spent a great majority of my life trying to be cool, or get people to like me, to try and fit in,” he says. “I first initially wanted to become an actor so that girls would like me, and so I’d be a big famous movie star so that I can get love, and self worth, and validate myself. So I had a flawed way in, but once I got in and realized, hey, this is actually a passion and an art form I like, I arrived at this place in my life where I have a profound desire to be as honest as fucking possible at all times. In my life and also in my work, and so this feels like a relief.”

For Cheri Honkala, being in her son’s film added just one more surreal layer to a varied, rich, difficult and rewarding life.

“My life is generally surreal, and I gave birth to these artists, and my life didn’t stop during the film,” Honkala says. “So it was difficult to have an entire film crew in my living room, where I live, and my work, which is similar to working in an emergency room, didn’t stop during the filming. I’m running for state rep right now, and the premiere of my son’s film happens to be during the middle of a special election, but first and foremost, I’m a mom, and I think this film is incredibly important, because it shows the people in the district that I live, the 197th district, in a really humane way. Nobody in this film is a villain or a bad person, a bad mother or bad father. They’re up against huge obstacles, and do the best they possibly can given the circumstances that they have. If people are given an opportunity to see what happens in this part of the country, that they’d be moved to want to do something about it.”

Once Mark buys Guillermo a camera so that he can pursue his newfound passion for filmmaking, the film becomes, in part, Guillermo’s documentary of his family, and its through Guillermo’s lens we learn more about Cheri’s extremely rough upbringing, Big G.'s struggles with addiction, and, perhaps, the one thing binding all of these people together, even when they’re furious at one another; a hard earned sense of human fallibility and the need for forgiveness. Never is this more evident then when Mark tracks down his own father, a former drug addict, tattooed even more generously than Mark, who is both happy and devastated to be reunited with his son.

The subtle use of flashbacks, the build-up of carefully wrought, yet loose-feeling vignettes, and the deft work of editor Sven Pape (his third feature with Weber) ultimately builds to a quietly powerful film. On working with Pape, Weber says, “When you make something this personal, you have to turn it over to another storyteller, and you gotta walk away.”

Having endeavored to share so much of himself in this process, putting his life into his ‘reality cinema’ genre in a way very seldom seen (or achieved), Weber was confident, and smart enough, to let the other artists he worked with, like his editor, or Brewer, or his own flesh and blood, have their say. In doing so, Webber has delivered one of the true wonders of the festival.