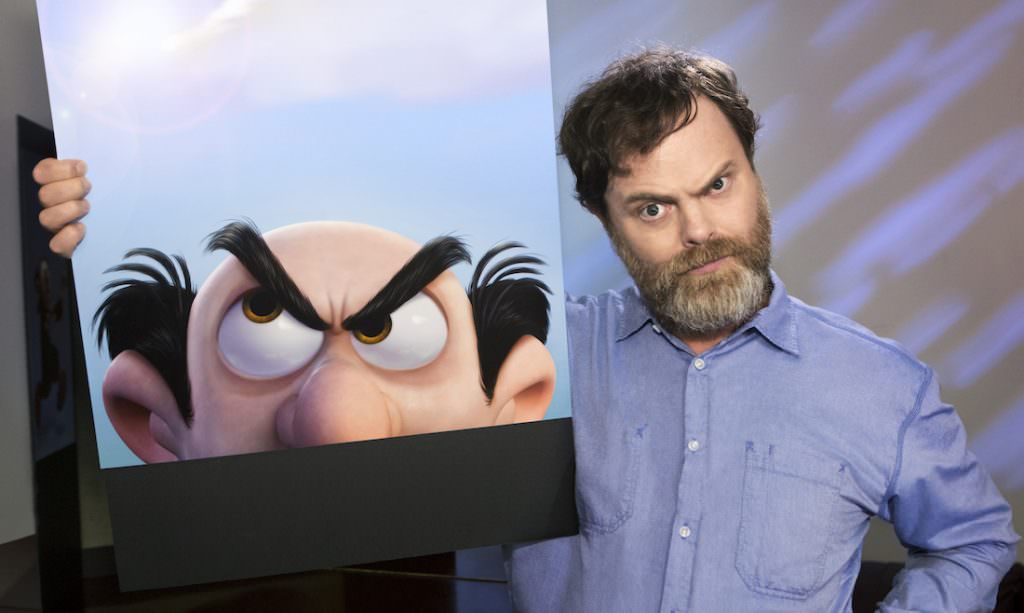 The new all-animated Smurfs: The Lost Village is a colorful, imaginative, funny, and sweet story that answers a question Smurfs fans have asked for a long time: where are the female Smurfs?

Rainn Wilson (The Office, Juno) provides the voice for the Smurf’s enemy, the evil wizard Gargamel. In an interview, he talked about the special skill that made him right for the part, the voice actor he admires the most, and his secret wish to play the other Smurf characters, too.

One of the primary requirements for Gargamel has to be the evil laugh. How did you develop that?

Yes exactly, thank you so much. I mean he recognizes this Smurfs for the evil horrid little blue creatures that they are and he is doing his best to rid the world of them. I think that, yes, he should be lauded for his efforts. There’s a lot of talk about illegal aliens these days. There is no more illegal alien than a Smurf!

And did you get a chance to do any improvisation or play around with the character at all while you were doing the recording?

I improvised a ton and then they also let me do a pass at the Gargamel portion of the script so I got together with Paul Lieberstein who played Toby on “The Office” and we did punch ups on Gargamel’s lines.  So we really had a good hand in it and really helped elevate the comedy of the character.  It was super fun.

Were you were a Smurfs fan?

I’m a little old for the Smurfs.  I think they really came on in the 80s, I was a little old at that point but I always loved me some Smurfs. They’re just so darn cute.  But I always felt for Gargamel. I felt for the sad, misunderstood guy, so lonely, so lonely, he is so lonely, just him and his cat.  He’s minus some social skills, that’s all.

You’ve played an animated bad guy before in Monsters vs. Aliens. What is the secret of playing a good bad guy?

Bad guys are so comedically rich because they are so blinded by their own egos. It’s really delicious fun to build up the biggest possible sense of narcissism. It is their biggest power and it is also their biggest weakness, so it is really a hoot.

When you are recording do you move around a lot? Do you do a lot of physical stuff? Do you make faces?

What’s interesting in these movies is they record you at the microphone. They videotape you at the microphone and the animators watch how you say the lines, and how your expressions look and how your eyebrows move and how your hands go along with the lines and stuff like that then they use that to help in the animation.  And so it’s funny because you'll see a character that you do in an animated movie and you'll be like 'Hey, that’s kind of me, that’s exactly the expression I did when I said that. That’s my eyebrow, that’s my shrug, that’s my hand gesture.” So it’s a little more than just a voice.

One of these days I’d love to do an animated movie where they bring the cast in and have us all record together. I think it’s harder to do, it certainly harder to schedule but it would be such fun to play off each other’s energy and improvise off each other and stuff like that.

What does it takes to be a great voice actor?

I wish I knew. I once did some voices on a TV show called “Adventure Time” that my son loves and Tom Kenny, who doe the voice of SpongeBob, is on the show.  He is one of the greatest voice actors I’ve ever seen in my life. They just kept throwing roles at him and voices and he just would come up with voices like there was no tomorrow.  They were like: “Okay we need you to play a bad guard here, and we need you to play a bumbling clerk on this one, and we need you to play a forgetful king on this line.  And he would just like start touting these incredible voices.  There are true masters of the genre.  It’s just using your voice to create a character. You’re not using your body and you know there’s no time for backstory or deep interior work.

What other characters would you like to play in the world of the Smurfs?