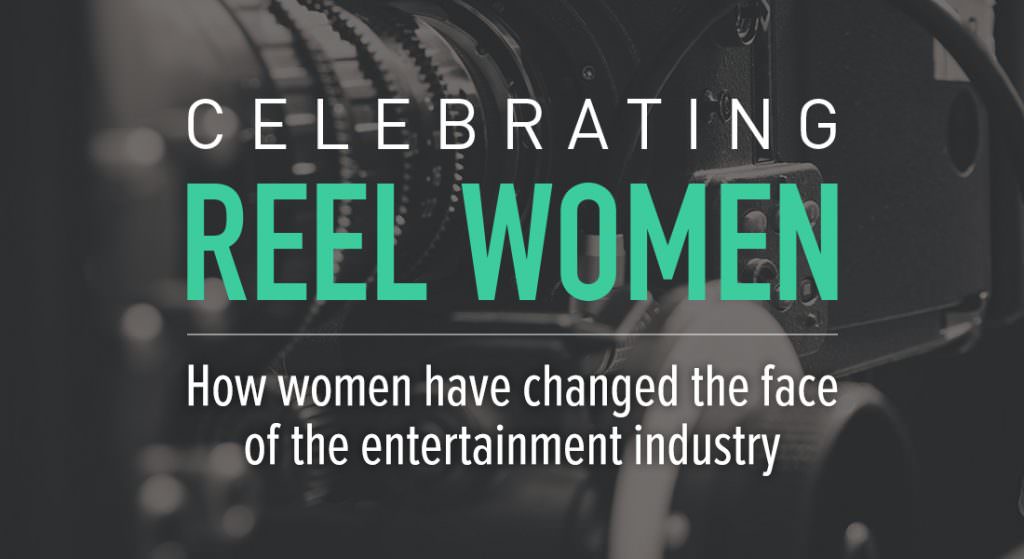 How Women Have Changed the Face of the Entertainment Industry

Over the past few weeks, we recognized Women’s History Month by celebrating women who are making an impact in film and television. From featuring movies with strong female leads to highlighting women who are calling the shots to spotlighting TV shows that are created, written, and produced by women, we covered various aspects of the entertainment industry.

Today, we’re emphasizing not only how women have contributed to film and television, but how a step forward for one is a step forward for all. This is but a small sampling, taken over many years, and warrants a deeper look at the many, many women who are making the entertainment industry a richer place, in every sense of the word. Discover how women are paving the way for one another.

Women have been at the forefront of the film industry since the early stages. Along with being one of the three co-founders of the first independent distribution company in 1918, Mary Pickford was an original co-founder of the Academy of Motion Picture Arts and Sciences in 1927. This achievement paved the way for Sherry Lansing, who would become the president of 20th Century Fox in 1980, and eventually the chairman at Paramount, overseeing the production of popular films like Forrest Gump and Titanic. Lansing’s accomplishments would coincide with Kathleen Kennedy becoming one of the founders of Amblin Entertainment with Steven Spielberg and Frank Marshall, which produced E.T, Back to the Future and Jurassic World. In 2012, Kennedy became the president of Lucasfilm, which brings the beloved Star Wars to screen. Learn more about women who are calling the shots behind the scenes.

Television is a staple in most homes, and woman have been revolutionizing the medium for years. In 1962, Lucille Ball became the first woman to run a major production company when she purchased her ex-husband’s shares of their shared company, Desilu Productions. In the 70s, Ethel Winant would make history when she became the first female TV executive at CBS in 1973, where I Love Lucy aired. These two great achievements have helped women continue to make their mark on television. Comedienne Samantha Bee, who considers Ball an influence, became the first woman to host a late-night talk show, Full Frontal with Samantha Bee, and is also the executive producer of the show in 2016. Learn more about women who are making an impact in television.

Mothers have always had a prominent place on television, but shows featuring single moms have told groundbreaking but yet, relatable stories. In the late 1960s, Diahann Carroll played Julia Baker on Julia, one of the first-ever single mothers portrayed on television. Later, Nancy Botwin would break bad before the most famous television drug dealer, Heisenberg. The main character of Weeds, created by Jenji Kohan in 2005, started her own marijuana operation to support her sons after the death of her husband. This movement continued when Michelle King was inspired to create The Good Wife in 2009, which follows the wife of an Illinois politician returning to her career as a lawyer following his sex scandal.

Some of the biggest box office hits and critical darlings were directed by women. Lina Wertmuller became the first woman to be nominated for an Oscar for Best Director for her film Seven Beauties in 1977. A few years later in 1988, Penny Marshall became the first female director whose films grossed over $100 million at the U.S. box office. Directing royalty Sofia Coppola was the first and youngest American woman nominated for Best Director in 2003 for Lost in Translation. And in 2010, Kathryn Bigelow won the Academy Award for Best Director for The Hurt Locker. Discover more great movies that were directed by women.

Oprah is considered one of the most famous people on the planet, and she’s been making an impact on the entertainment industry for decades. She was only 19 when she became an anchor on WTVF-TV in Nashville, making her the youngest and first African American female news anchor. The Oprah Winfrey Show, which ran for 25 years, was an influential and educational platform for various topics and voices, and blazed a trail for many successful women in television including Ellen Degeneres, Gayle King, and Iyanla Vanzant. In addition to being one of the most memorable talk show hosts, Oprah has been a prominent producer and executive, launching her own television network in 2011. Her Harpo Productions has produced groundbreaking films such as Beloved and Precious: Based on the Novel Push by Sapphire. Recently, Oprah continued to pave the way for women when she produced Ava DuVernay’s acclaimed film Selma through Harpo Productions, while also starring as Annie Lee Cooper.

Women have made a lot of amazing contributions to film and television and it’s critical that we recognize this beyond Women’s History Month.