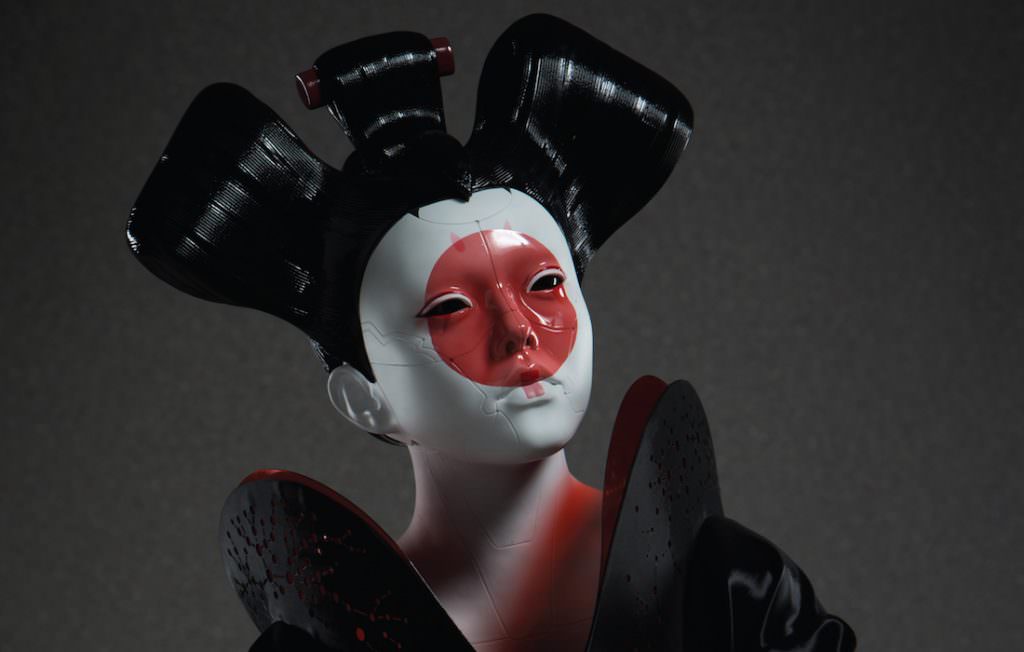 The Dazzling Design of Ghost in the Shell

Freakish cyborgs look right at home in Scarlett Johansson's Ghost in the Shell sci-fi epic thanks in part to three years of ingenious design work from New Zealand-based Weta Workshop. Inspired by Masamune Shirow's visionary Manga series and 1995 anime film, co-art director Ben Hawker, who previously channeled Middle Earth critters for the Lord of the Rings trilogy, worked with director Rupert Sanders (Snow White and the Huntsman) to fashion a wild array of futuristic semi-android city dwellers. He says, "Our specialty is character-based stuff, so if it lives and breathes and moves and wears something in Ghost in the Shell, that's where we really get involved."

Hawker and digital artist Adam Middleton, who are both featured in "The Art of Ghost in the Shell" book, Skyped from Wellington to discuss the design process behind exploding-head Geisha Girls, the criminal mastermind made from spare parts and, of course, the "Thermoptic" body suit worn by Johansson in her starring role as cybernetic anti-terrorist Major Motoko Kusanagi. 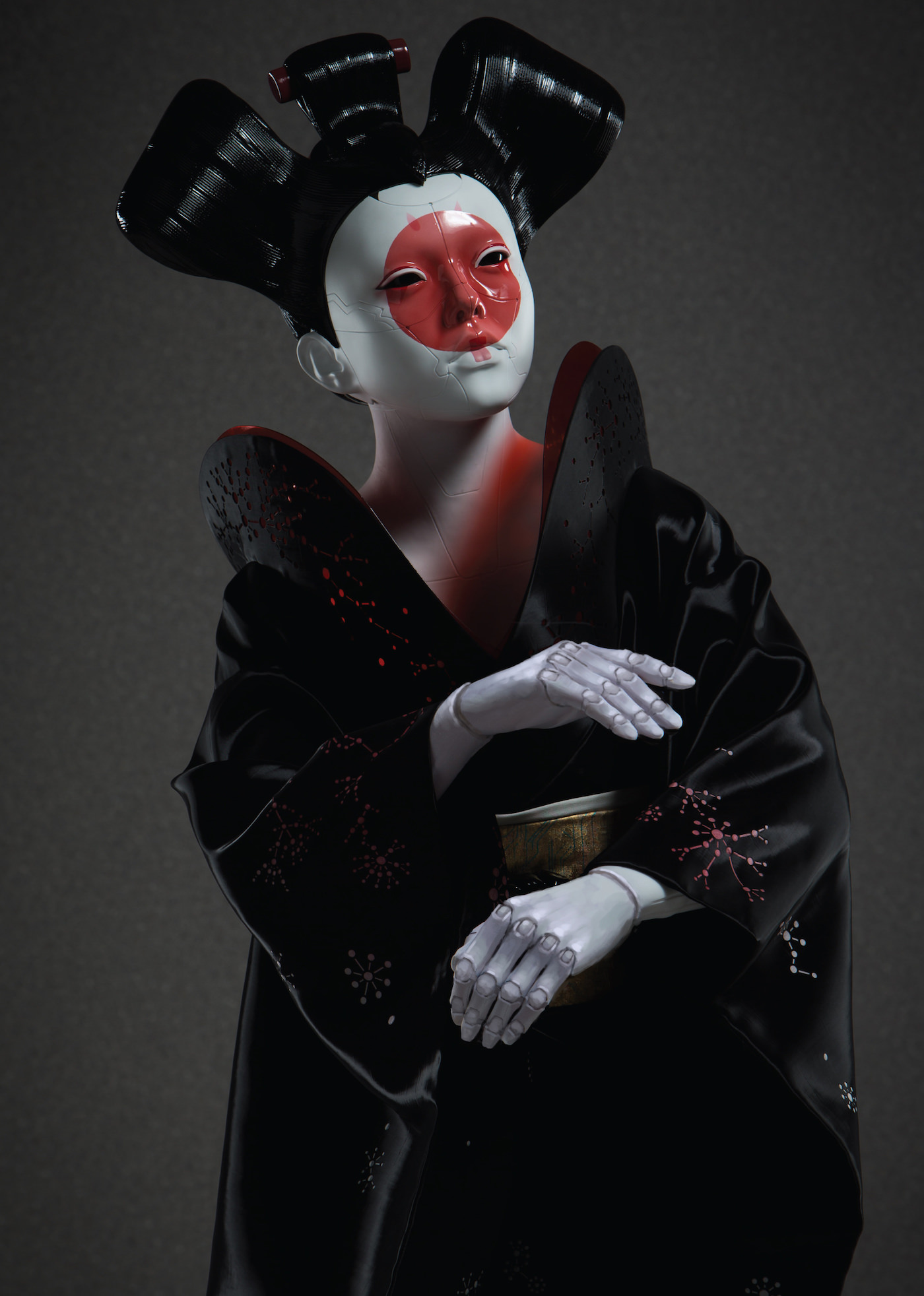 Geisha Girl masks were created for each actress.

Face-altering prostitutes and Yakuzi 'bot gangsters roam streets of the future but the city's creepiest characters take shape as demure-looking Geisha Girls who've been programmed to kill by a cartel of evil hackers. "We tried everything from grease paint to very thick prosthetics but eventually we campaigned to Rupert that the best way to do the Geisha Girls was to make everything a mask," says Hawker. "We took Rile Fukushima, the lead Geisha, as our model and made all the other masks look exactly like her. Then we scaled the masks to fit each of the different actresses and wound up getting this flawless look."

Sanders envisioned the characters as pieces of "painted machinery" crafted by style-conscious artisans. "We wanted the dolls to look as beautiful on the inside as they are on the outside," Hawker explains. "The innards came out of Rupert and our creative director Richard Taylor looking at antique type writers with their beautifully polished brass fittings. We also referenced luxury watches and fantastically elaborate Japanese music boxes." 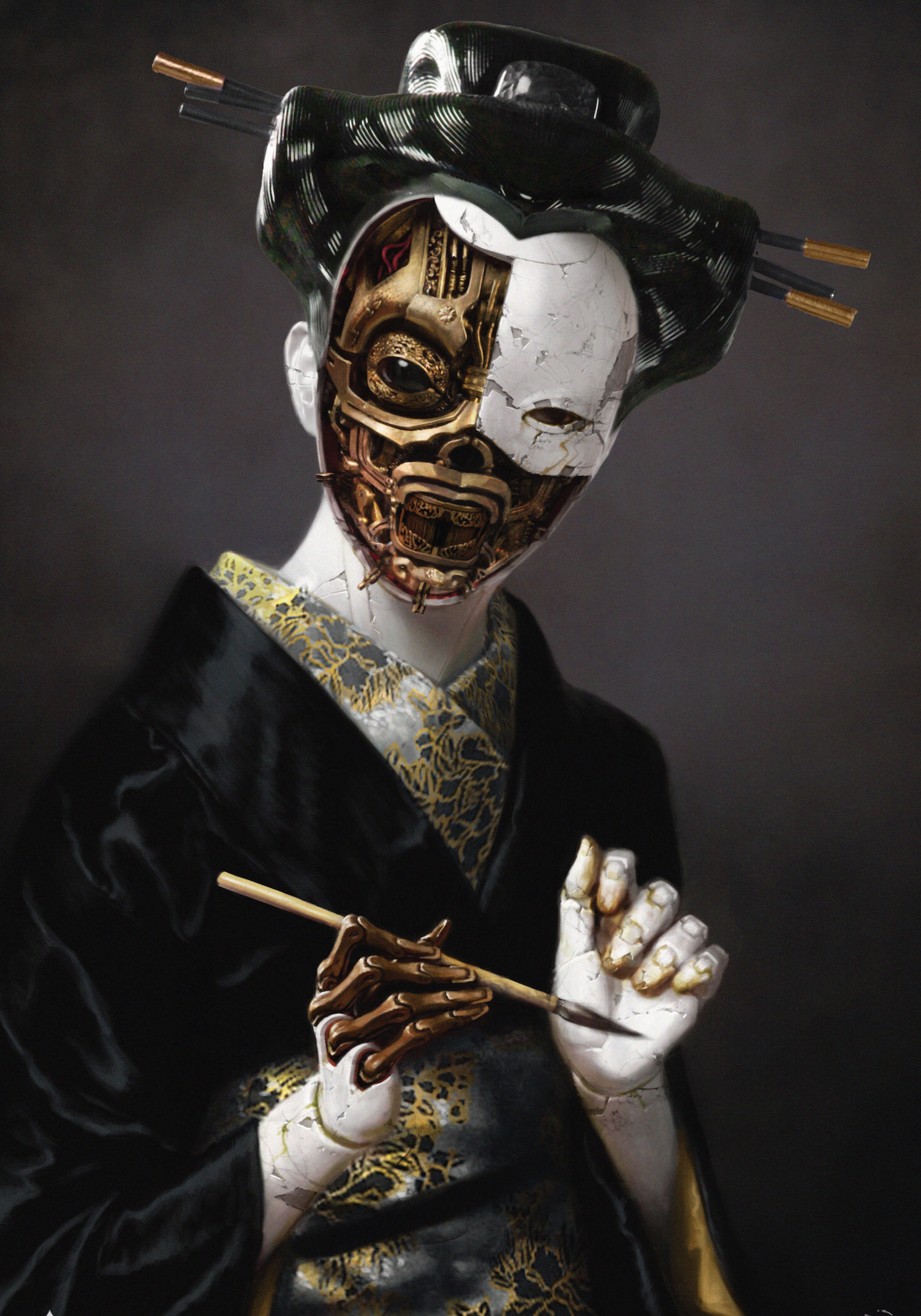 The Geisha Girl's intricate interior was inspired by antique typewriters.

To reveal the intricate gears whirring below the glossy surface of the Geisha Girl faces, off-camera puppeteers flipped open their masks via Servo motors concealed in hairdo buns and connected with cable cords hidden beneath the actresses' kimonos. Hawker says, "We also had standalone dummy heads, which were old fashioned animatronics mounted on C-stands where the whole thing would flip open and you'd see all those working innards. For the hybrid Geisha, where the actress wore these deep masks so when these petal-like pieces flipped open, there'd be a green screen sock on the face of the actress, which allowed you to still see some of the inner workings. And then there were the prop Geisha Dolls which were built to be destroyed. You can reach a level of obscene detail with CG effect but it's no fun to blow up. When you're shooting at our prop Geisha Dolls, you really want to see those pieces fly." 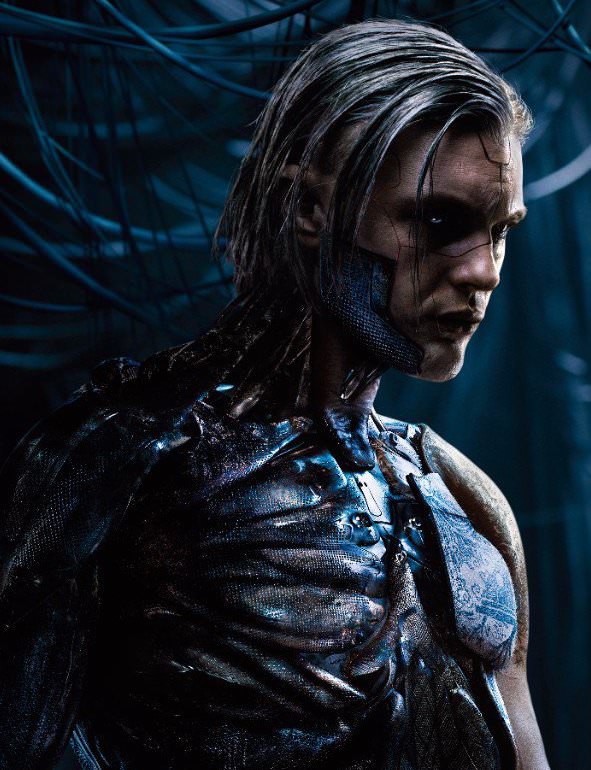 Ghost in the Shell villain Kuze, portrayed by Michael Pitt, has a brilliant mind trapped inside a broken 'bot body. Hawker says, "He's missing bits and pieces, like a cyborg on the assembly line that got thrown away," says Hawker, who notes that David Bowie's Ziggy Stardust persona served as an androgynous role model for Kuze early in development. "Because Kuze's falling apart, he tries to express some form of creativity just in the way he adorns himself," Middleton adds. "The pagoda style blue painting on porcelain — that's Kuze trying to amplify himself even though he's basically a derelict mistake."

Like the character himself, Kuze embodies a combination of analog and computer-generated wizardry. "Kuze was a big prosthetic job," Hawker says.  "Michael wears prosthetics on his chest and face and shoulders. Kuze found a small female arm from somebody and stuck that on, and then he's got a big male arm on the other side. Michael wore green stockings on his arms which were pretty much replaced with CG. We probably spent more time on Kuze than any other character because there were hundreds of options. It was like putting together a jigsaw."

To make matterse even more complex, the Kuze character is patched together from a multitude of ethnic types. "We experimented a lot with facial features where we might try an Asian eye with an African arm," Middleton says. "It was really difficult to get all that stuff working in harmony in a concise character that doesn't just look like some hodge podge that's been thrown together."

The Major and Her Suit

Scarlett Johanssen stars as the formerly-human, now-cybernetic "Major," salvaged from a near-fatal car crash and charged with taking down a gang of terrorist hackers. The design of "Major''s form-fitting body suit informed the entire film's aesthetic, according to Hawker. "Rupert said if we start with the Major and get her right, then we can extrapolate in every direction."

Production designer Jan Roelfs envisioned the future from the standpoint of '80s and '90s fashion and technology, speckling the antic urban environment with big shoulders, cable-connected devices and bright neon lights. "We also designed round ports for the back of the Major's neck, which is a real Ghost in the Shell trademark," Hawker says. "We wanted to show she's the latest generation, the first perfect cyborg where the brain's the only human thing that's left."

As for the external skin that cloaks Major's internal mechanisms, filmmakers skipped CG and motion capture options. Instead they devised super-pliable body armor for Johansson and her stunt double to wear on set. Middleton says, "Once the decision was made to build this suit as a practical thing the actress could actually wear, it became a huge R and D process. The Thermoptic Suit needed to look as if it were poured right onto her body, so there were a lot of things to take into consideration: Where would we put the panel lines, the zippers, the connections and fastenings?" After much experimentation, Middleton says, "We developed a special silicone material that poured onto mesh to give the body suit great shoulder pads and fantastic separation lines that echoed all of the Major's separation lines."

Weta Workshop worked with costume designer Flo Foxworthy to craft eight identical suits. "We 3-D milled the core of the suit from this carefully shaped epoxy mold. The pigmentation on the surface looks like regular skin only a little more perfect and sort of distorted in this very odd, otherworldly way," Hawker says. "Flo took the qualities of that silicone into account so that when Scarlett Johansen put on the suit, it squished and pulled and tightened in all the right ways."

Featured image: Geisha Girl masks were created for each actress. ​