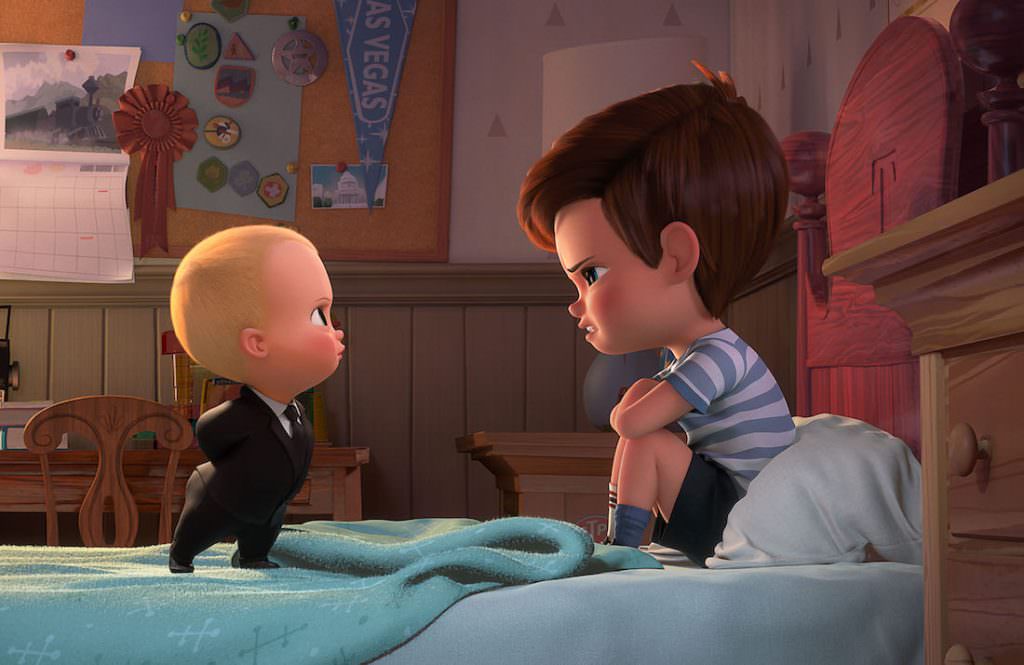 Director Tom McGrath (the Madagascar movies) admits that his very funny and heartwarming new animated film, The Boss Baby is both a tribute and apology to his older brother. It is the story of a seven-year-old named Tim whose blissful life is turned upside down by the arrival of a baby brother. As Tim’s parents dote on the new arrival, they somehow never notice that the baby has a suit and tie, an expensive watch, a briefcase – and the very adult speaking voice of Alec Baldwin. The Boss Baby hits theaters this Friday, March 31.

In an interview, McGrath and his producer, Ramsey Ann Naito, spoke about drawing from their own experiences in creating the story.

This movie was inspired by a book?

TM: What was great about Marla Frazee's book was the way it captured the idea that every baby is a boss baby.  It’s a little thirty-page book and it’s really a metaphor. When a baby comes into parents’ lives, it rules the house.  It orders them around, it cries in the middle of the night and wakes everyone up.  We just thought it would be a great animated story and that was a springboard into telling this whole story about sibling rivalry story about family.

I saw the book six years ago and worked with writer Michael McCullers, who wrote the Austin Powers movie and he is a father of four. We said, “Let's turn this into the point of view of the kid who gets the baby brother who is an alien.” Kids are always afraid that the baby will get all the attention and they will be ostracized or whatever and we thought, “Well, that's great because now we have a theme about love and is love something that you want to get or is it something that should given as well?” No one had done that story before and so it just conjured all these kinds of ideas: what if Tim's afraid that he's going to lose love to babies, what if babies fear that they are going to lose love to puppies?

And your own experiences came into it as well?

TM: It’s personal to both of us. Ramsey came at it from the mother’s point of view and I came at it from the brother's point of view. I have an older brother and I was the boss baby.  I terrorized him and tortured him. And you know family — someone can be your best friend but they can also be your antagonist. You have family together under one roof and there is friction, there’s rivalry, and there is competition. And now we are adults and we love each other and we have the strongest bond you can have.  It’s my apology letter to my brother forty years in the making.

RAN: About three and a half years ago Tom sent me the script and I literally thought of it as a reflection or a story about my life because I have three kids and my first son was seven when my second son arrived, just like Tim.  My kids are older now but I still live in a household of sibling rivalry. So I just loved the story about brothers joining up only to get rid of each other but then learning that they love each other, they need each other, and they want to be brothers.

It’s also a tribute to childhood and imagination.

TM: Boss Baby never had a childhood and a kid teaches him to have one. We really wanted to celebrate our childhoods. Ramsey and I grew up in a time without cell phones and computers and video games.  When you were a kid you used your imagination and went outside and played. We really wanted to make it a period movie, to romance that time.

I think as adults we grow up and we forget about our imaginations.  We kind of lose it. I always like this quote from Ted Geisel, Dr. Seuss.  He said, “Adults are obsolete children,” because we forget that childlike perception of the world around us.  So we tried to make this film something the family could enjoy together: Let’s entertain both the parents from their point of view and also the kids from their point of view and so they can watch it together.  They may not laugh at the same things but at least they can laugh at the same time and enjoy it together as a family.

What was your biggest technical challenge?

RAN: Getting baby jiggle right, those wonderfully chubby little arms and legs and cheeks and tummies. We actually had a task force that was led by Tom to get them to really deliver on the cutest most delicious baby jiggle.

TM: They had to write algorithms for the right amount of jiggle and the viscosity of baby jiggle.  The thing is parents know exactly how it looks and so we can't get it wrong.

Who came up with it idea of Alec Baldwin as a Boss Baby?

TM: It was kind of a no-brainer. I had worked with Alec on Madagascar 2 and even from looking at models of drawing the little baby in a suit he was the clear choice.  His voice is like a two hundred year old cello, it's so rich. He has so much texture to his voice. And he is really funny; he knows where the comedy is, and he can play the drama, too. And having grown up with three younger brothers, he can really relate to the story.

Your films always have secondary characters who all but steal the movie, like the Madagascar penguins.  In this film, I loved the baby triplets and the Wizard alarm clock who sounded just like Gandalf!

TM: We thought it was funny that the Boss Baby had this baby task force. He'd be so frustrated by the fact that they're just kids and they don't know how to read or write or anything. Wizzie came out of the blue.  I was home for the holidays and my nephew, James, did a really good impersonation of Sir Ian McKellen, so that’s how it happened.  Our process is that we don't just write a script and shoot it. We just keep finding things that are interesting.

I would buy that clock.

RAN: I would too.