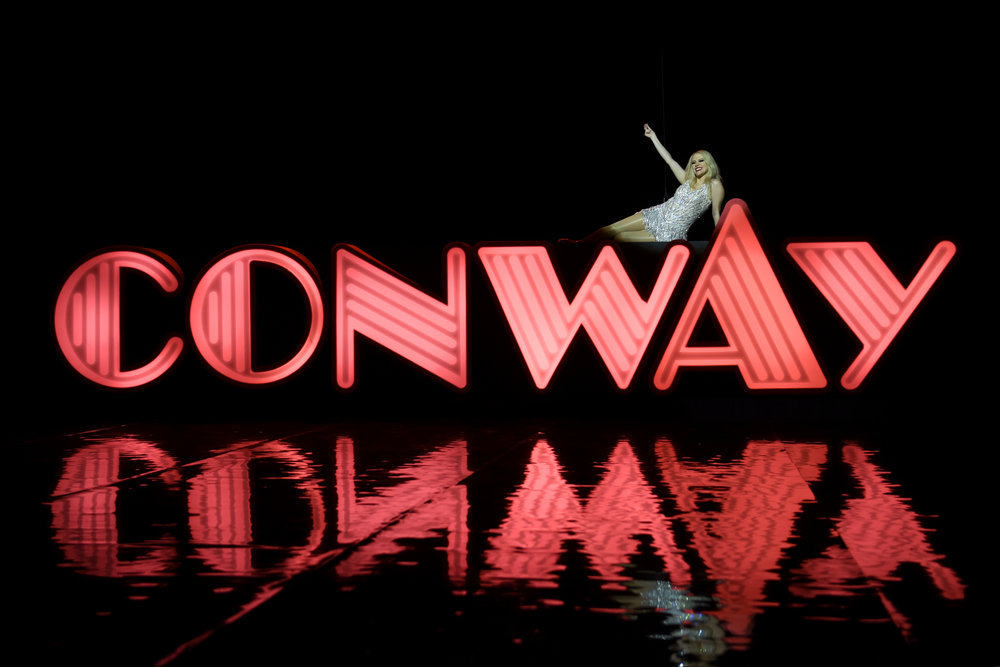 78-year old Eugene Lee skipped out on his MFA from Yale (they later awarded him the degree) to design the Tony award winning set for Candide on Broadway. Lee humbly recalls that his sets caught the eye of “some guy” from NBC who requested a meeting. “You know, I thought, ‘Well, I don’t know anything about television, but what’s the harm?’” Lee said.  “So I made the appointment, went to New York, knocked on the door. Nice young guy, had no shoes on, very informal. Doesn’t want to see any of my work.”

Lee was immediately brought on to create the sets for a brand new late night comedy show called Saturday Night Live. “The next day we walked right into NBC, right into [SNL studio] 8H. It was just a big empty space – my kind of space. The first thing I did was take the seats out and put them where I want them. That was it. Hired!”

Despite a long and successful career, Lee harkens back to days before the first broadcast for the work he’s most proud of on the show. “My real contribution was when I put the seats up along one side. They were sitting on scaffolding. We did a lot of scenery based on scaffolding because it was cheap. They were renovating the old Yankee Stadium and taking out the old wooden seats out and putting fiberglass seats in. They were the only seats I could get. [Show creator] Lorne [Michaels] was concerned that they weren’t going to be comfortable enough, he was very concerned about that.”

The comfort of the seats did not dissuade audiences. Tickets to a live airing are nearly impossible to get. In 1975, however, no one knew the impact the show would have on pop culture or that it would still be must see TV in it’s 42nd season. “The original set at Saturday Night was supposed to be gritty,” Lee recalled. “It was not ready for prime time players, so I thought it was kind of like a club down in the Village.”

The original cast may not have been considered “prime time” when the show first aired, but John Belushi, Jane Curtin, Gilda Radner, Dan Aykroyd, Chevy Chase, Garrett Morris, and Laraine Newman proved to be certified comedy geniuses. The show would later spawn the careers of legends like Bill Murray, Molly Shannon, Will Ferrell, Eddie Murphy, Tina Fey and on and on. Fans like to recall their favorite cast, and while Lee won’t cop to any era being the best, he acknowledges that the show has seen different phases. “It’s gone up and down,” Lee admits. “It has a lot to do with the changing cast. We’ve had some really good writers and some not so good writers.”

Sets and production value have changed as the show has become an NBC mainstay, but Lee believes that the show remains popular because the jokes are timeless. “One of the first people I worked for there was Jim Signorelli, who did the title sequence for the first shows. And they were hand painted, and Jim was doing parody commercials. Some of them would still stand out today as being perfect. I think one of the first was ‘Show Us Your Guns.’ Who thought it would go on for so long? Not me!”

The show was initially low tech and sets were less complicated, which Lee makes no effort to hide is the way he prefers things. “The credits for the show were originally on a roller,” Lee remembered. “It was a physical item. They just brought a camera up and pointed at it and it rolled.”

“You know about our llama?” Lee asked. I confessed I am not acquainted with the SNL llama. “When we go out into our hallways, almost 90% of the time we have Abe Lincoln, a llama, and a chorus girl. They’re always there in the background. We’ve forgotten why we do that, but as soon as we get a script that says we’re shooting in the hallway, we instantly order up the llama.”

Tradition is tradition and not just any llama will do. “They sent the wrong llama once. It was the wrong color so we had to send it back and get the proper llama in. We’re silly that way. It’s kind of touching.”

With a show full of comedians, there are bound to be some inside jokes. “Way long ago, the design department used to have a black and white cow,” Lee recalled. “It was life-sized and it was stuffed. We used to hang it over scenery we didn’t like and occasionally drop it. We’ve gotten a bit more corporate now.”

“In the first year, we had the Muppets,” Lee recalled. “They were mean Muppets. They took a lot of space in the studio so that’s one of the reasons they may not have stuck around.”

Rarely sentimental, Lee realizes that many of his iconic sets cannot be preserved. Due to limited space in crowded New York City, many of the sets are disposed of. Lee and his team recently recovered a rather memorable backdrop that was thought to be lost. “Church Lady is perfect,” Lee said. “It’s done rather simply, just a painted window. It represents the early days when things weren’t so realistic. We recently found that set. It was missing. It was actually in the bottom of some hamper, unlabeled.” 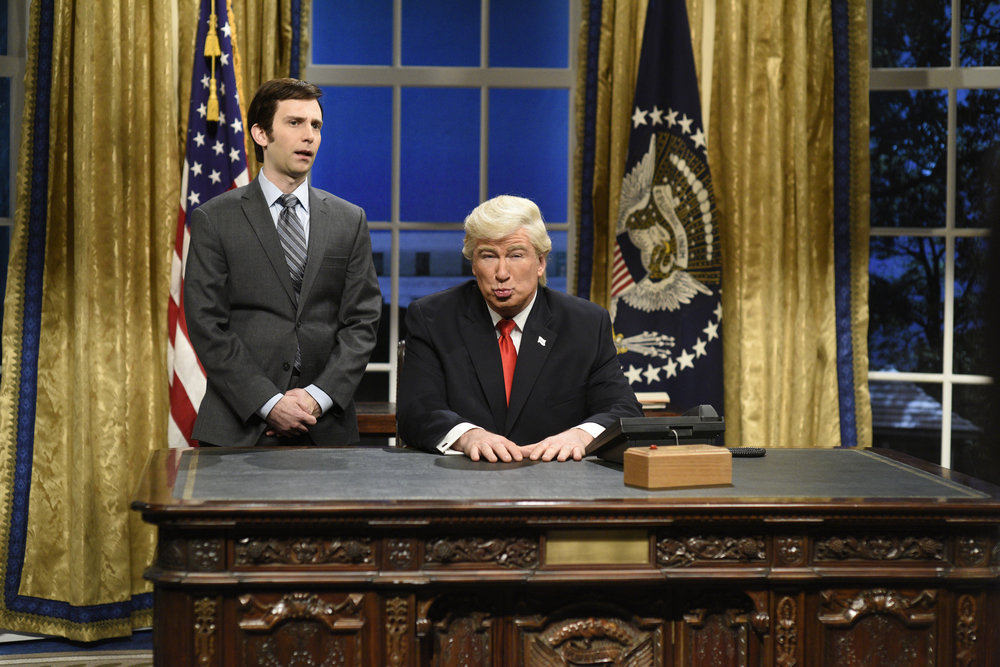 (l-r) Kyle Mooney as a presidential aide and Alec Baldwin as President Donald J. Trump during the Oval Office Cold Open on February 4th, 2017 — (Photo by: Will Heath/NBC)

Another Dana Carvey classic with SNL A-lister Mike Myers spawned a successful feature length film. Lee’s design captured the basement that every teenager from the ‘90s remembers. “Wayne’s World was wonderful in our strange version of a basement. They always want more now. Movies have made people want things in more detail.”

One set that does make a weekly appearance is the Weekend Update. Halfway through each show, the anchors deliver real news stories with a punch line. Chevy Chase, Amy Poehler, and Jimmy Fallon have all sat at the desk and the backdrop has evolved over the years. “We tried to change it recently,” Lee said. “We had some new writers last year and they asked if I could bring it more up to date with more neon or LED lights like some of these other shows that are slicker. We brought in all kinds of electronic things to try. It made things heavier and we have just a couple minutes to set it up. I personally like the way it is now. It’s made up of three or four different segments so when you clamp it all together, hopefully you don’t see the seams.” 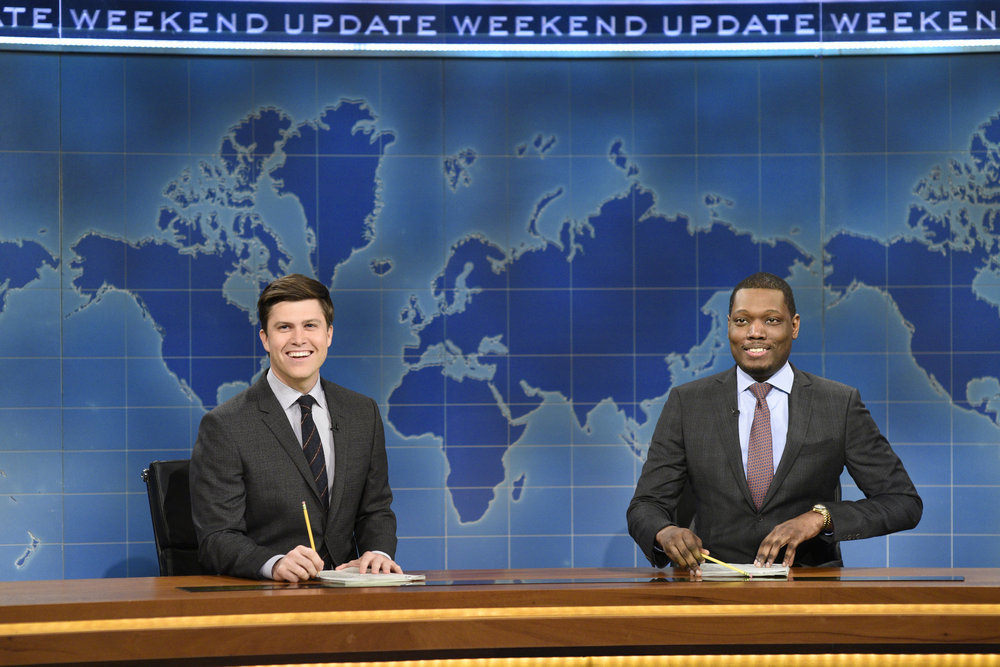 Pictured: (l-r) Colin Jost and Michael Che during Weekend Update on March 4, 2017 — (Photo by: Will Heath/NBC)

Some changes are easier to make than others. “The desk has gotten very big. I don’t know why that is. They said, ‘Could they sit closer together?’ They just moved their chairs closer together.”

Amidst his demanding schedule, Lee finds time for other projects like creating the stunning sets for Wicked (who can forget that iconic dragon?) still in use by professional productions today. “When we do shows like the Wicked musical, we have lots of time and everything is detailed very carefully and everything is planned,” Lee explained. “Saturday Night is not that way. It’s just kind of cuckoo. It’s always changing, particularly now.”

SNL alums Jimmy Fallon and Seth Meyers went on to take over the NBC nightly talk shows and Lee designed their sets. “It took me a year to make Seth sit at a desk and not stand up,” Lee said. “But I think he’s better at a desk. Every time I saw him I would say, ‘You should be sitting at a desk.’ He would say, ‘It looks too much like Weekend Update’ and I would tell him, “Should I remind you that Weekend Update is a hit?”

Lee has had lots of hits. Despite creating some of the most well remembered and beloved sets on television, he remains humble. He fondly remembers an obscure sketch from season 2 set against a solid black curtain. “I always liked [Michael] O’Donoghue when he would demonstrate what it’s like to get big needles pressed into your eyes. It’s all based on performance. It’s not about the scenery.”

Despite a more than four-decade career in New York City, Lee calls Rhode Island home. Each week he takes the train to Grand Central Station and bunks across the street at the Yale Club. When asked how he manages the travel schedule, long hours, and last minute changes, his secret is straightforward. “We just work it out. Work on it Wednesday, work on it Thursday, work on it Friday, and do it on Saturday.”

Ever reluctant to brag, Lee admits that the pace is blistering. “People say, which may or may not be true, that even on a bad show, being in the studio is interesting. We literally change sets in different places within a minute and a half.”

Saturday Night Live has become an American icon with no real rival. “It’s an unusual show. Whenever it goes away, there won’t be a replacement. We truly are live. Somehow we have to make it work.”

The show isn’t likely to end anytime soon and Lee suspects that there are more changes to come. “I hear rumors that they’re going to do more renovation on the studio, replace all the cameras and electronics. I guess they think we’re going to stick around a bit!” 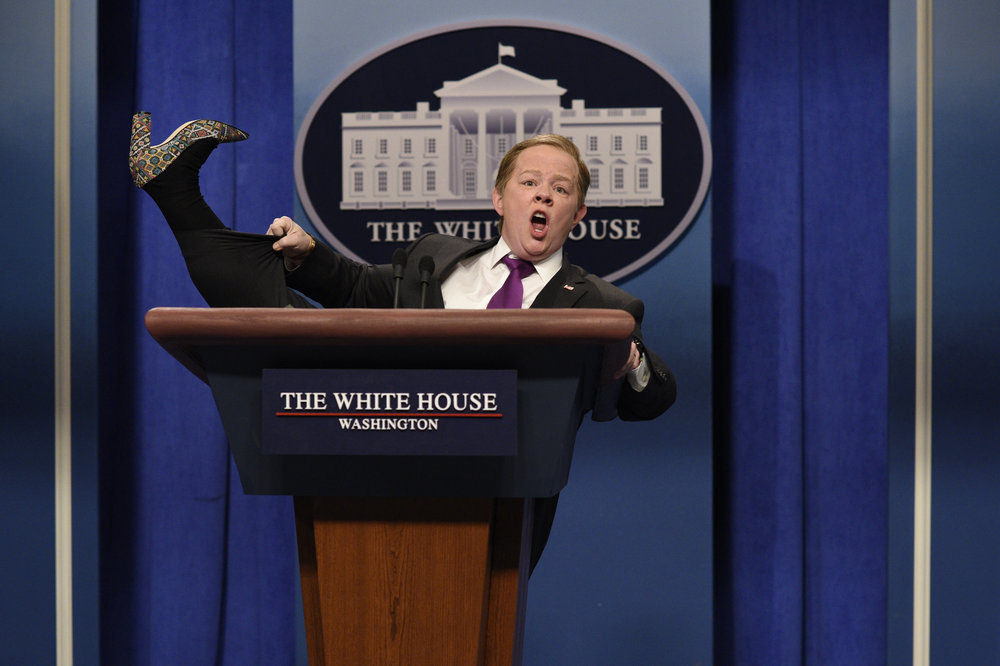